A reef for Saida

A reef for Saida

The waters off the coastal Lebanese city of Sidon - known locally as Saida - have, for many years, been used as a dump for city waste. Following an extensive clean-up operation, local ocean activists hope to attract fish and dive tourists back to the their corner of the Mediterranean by creating an artificial reef made up of old aircraft. Will it work, or are they simply dumping more trash into the sea?

“Yalla, let’s go!” A broad smile spreads across the face of Mohamed El Serji, the 63-year-old marine activist and director of the Sidon Dive Academy in Saida, Lebanon. Creases form within the sun-browned skin around his eyes as he takes to the wheel of his SUV, ready to navigate the 6am calm of this ancient Lebanese port town. The vehicle is jammed full of dive gear and 20-gallon water-bottles filled with boat fuel.

But while El Serji runs plenty of recreational dives, today is not a fun dive day. Instead, we board a boat loaded with a team of installation divers. As we pull out of a small stone harbour lined with small wooden craft piled high with salt-crusted fishing nets, we fall in line behind a tug boat pulling a large barge, its deck filled with an incongruous collection of decommissioned aircraft. We follow them out to sea. Each of the craft are to be delivered to the ocean floor, a new artificial reef that, it is hoped, will boost both fish and dive tourist numbers to this corner of the Mediterranean.

Artificial reefs are man-made, underwater structures. The concept of a constructed reef is an ancient one. Humans have been creating them for millennia for a number of reasons, from coastal defences to the rebuilding of ecosystems. Today, artificial reefs, especially those built for marine conservation purposes, garner plenty of attention – as the fanfare around these particular drops showed – but do they really work, or are we simply dumping trash into the ocean?

I watch as a yellow crane begins to winch a Cessna airplane up from the barge, swinging it out over the sea and lowering it gently down to the surface of the water. I hit the surface rather less gently and the cold takes my breath away. As I descend it’s impossible to see the plane I am helping to sink from more than four metres away due to recent storms churning the water. I make out 35-year-old Amal Bittar through the gloom, working to unscrew the bolt from a clasp attaching the crane webbing to the plane chassis. Eventually she gets it free and we pull the webbing clear and head back to the surface with it. Amal shivers as she wrings water from her hijab, but is ready again when it is time to drop a helicopter an hour later.

We spend around eight hours at sea. El Serji spends at least seven of those in the water, supervising the sinking of all three Cessnas, two Huey IIs and a small passenger plane. No mean feat when the sea temperature is 17 degrees Celsius and it’s mid-Ramadan, so more than half the crew is fasting. He works tirelessly to locate drop points, secure marker buoys, liaise with the crane lifting team on the barge, and direct his team of divers to help position the aircraft and detach them from the crane hoists. It’s clearly a labour of love for all involved. This community-wide effort involves everyone from the army and local government, to an NGO called The Friends of Alziri Island Association and the Lebanese Dive Association and, of course, El Serji’s Sidon Dive Academy. Even the Interior Security Forces bring out a boat-load of helpers. Everyone, it seems, is behind the project. There is a clear sense of pride in the local marine environment and, doubtless, they all want the economic gains brought by more fish and tourists.

Talk on deck centres around the benefits of artificial reefs attracting fish. From 13-year-old Ines, the youngest female member of the Sidon Dive Academy, to Kamal Kozbar, a local government member and Director of Friends of Alziri Island, everyone’s motivation for involvement in the project is fish. It is a well-known phenomenon – fish are attracted to underwater structures. Much like natural reefs, caves and caverns they offer shelter from predators and adverse sea conditions. They are, ultimately, viable alternate habitats. The stable, hard, intricate surfaces offer the necessary foundations to which algae, coralline algae, weed and invertebrates can attach, forming the basis of a food chain that can support fish species all the way up to apex predators. Research carried out into how artificial reefs affect local ecology and whether the aggregations of fish using them has a net positive or negative impact. Conclusions have varied, sparking an ongoing conversation known as the “attraction/production debate”.

Today, artificial reefs, especially those built for marine conservation purposes, garner plenty of attention – as the fanfare around this project showed – but do they work, or are we dumping trash into the ocean? 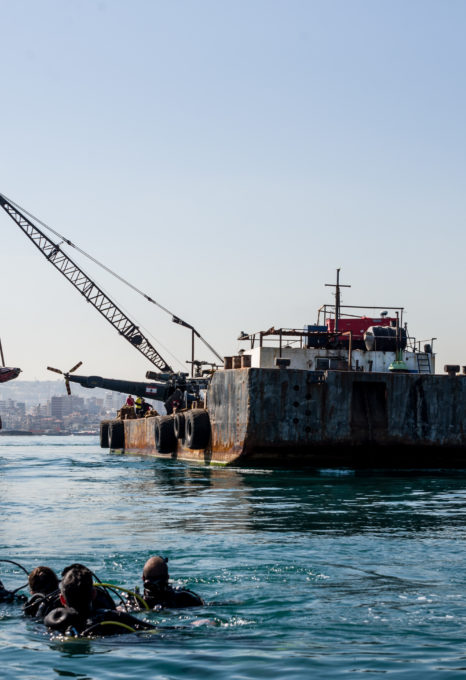 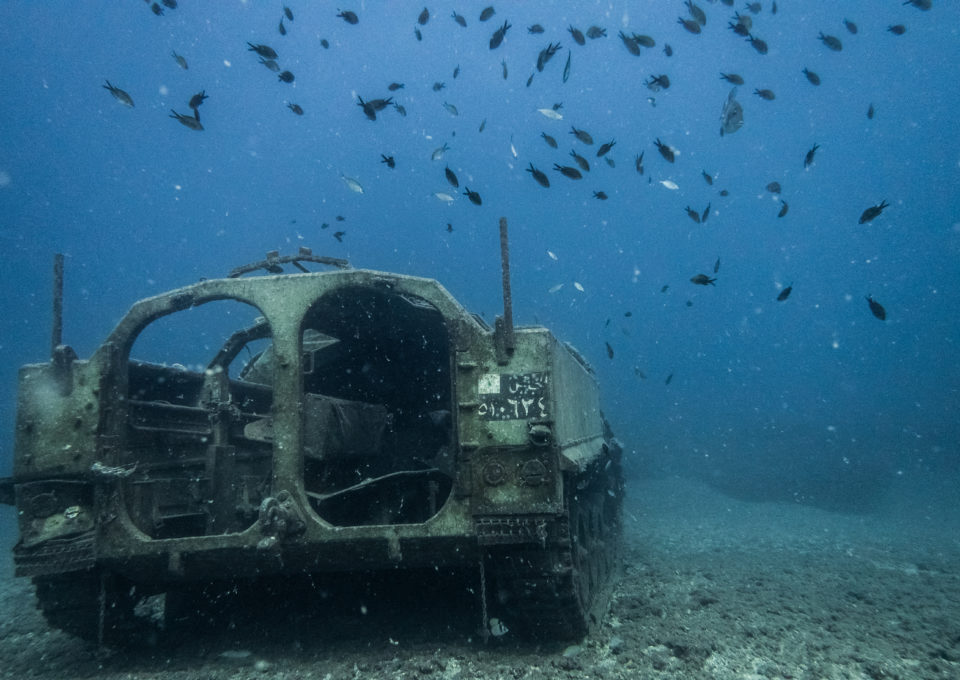 Some marine scientists argue that artificial reefs simply attract fish away from other areas, concentrating them on the reef, rather than increasing their numbers. If you are attracting fish around a specific, known point, it is then easier to catch more of them, faster. The net impact of which, on the biodiversity and biomass of the broader region, is likely to be negative. The counter argument, is that natural reef systems have their own restricting factors on biomass and are only able to support a limited amount of life. Therefore, fish struggling to thrive on a natural reef due to availability of resources such as food, shelter and breeding sites, may do better in terms of living longer and producing more offspring if they move to an emptier artificial reef. The question this raises for anyone creating an artificial reef with a conservation agenda is, are you simply attracting life from elsewhere or are you creating a new habitat that will bolster biodiversity and biomass?

Hazel Oakley, Director of the Malaysia based Tropical Research And Conservation Centre, which runs a successful artificial reef project now in its ninth year, has some advice for those embarking on artificial reef building: artificial reefs are beneficial on balance, if planned, executed and managed appropriately, in conditions that can support them. But they are not a panacea. If nothing currently grows in a given area, she says, artificial reefs won’t miraculously attract fish. She has found that often whatever it is that is preventing natural recruitment, recovery or growth would doom an artificial reef project from the start, no matter the design – in her role as a marine consultant she has encountered a number of upmarket Malaysian hotels disappointed to discover they cannot have a beautiful coral reef on their doorstep unless they stop fertilising their beach-side golf course.

Dan Mele, a masters student working on coral restoration research at the University of the British Virgin Islands concurs with Hazel when it comes to planning and execution. He believes that while well thought out artificial reef projects can have a positive impact, thorough preliminary research into type, location, size and material should be carried out for optimum results. “I’ve seen many projects where items such as reef balls are deployed with little thought, and they just turn into concrete structures covered in algae,” he says. He goes on to caution against overfishing where otherwise dispersed fish are more easily accessible to fishermen when concentrated around an artificial reef.

The Osbourne Reef catastrophe is a cautionary tale of what can happen without adequate planning. In 1974, Broward Artificial Reef Inc dropped approximately 2 million old tires into the sea off the coast of Fort Lauderdale, Florida. The reef would allow for the effective disposal of a vast amount of waste while also creating a new habitat that would attract reef fish, then game fish and, most importantly for the local economy, sports fishermen. Unfortunately, they failed to adhere to the first rule of reef building: stability. The tires were bound in bundles using steel wire or nylon, neither of which lasts long enough underwater for the tire pile to have remained stable. The pile broke apart, and coral doesn’t grow on a mobile surface. Worse still, those now-mobile tires have been caused damage to natural coral reefs, beholden to tides, currents and the power of storms. Thousands of tires have been found as far as the Panhandle and South Carolina.

Back with El Serji, I overhear a journalist ask: “Can you explain how throwing pieces of junk into the sea is good for marine life?” He replies that fish are attracted to underwater structures and the more fish there are, the more tourists will want to dive in Saida and the better the livelihood of fishermen will be. Later we talk more about this and he explains his motivations and the process the project went through in depth. He describes how four years ago overflowing landfill and unregulated waste disposal had reached such levels that the entire sea floor around Saida was covered in layers of household waste. With a team of four, over a period of two months, he cleared every piece of rubbish from the seafloor, revealing a barren silty plain. He refers to this area as “the capital of underwater garbage”. He now not only wants to keep Saida’s seafloor waste-free, but hopes to turn things around completely with the installation of the artificial reef. “You have to understand our sea was dead, there was nothing in it. We had been calling for artificial reefs for many years,” he explains. “I remember when we had all kinds of fish – we were famous for it!” Talking animatedly he describes how it used to be: “We had sponges, huge sponges! It was extensively covered with seaweed and all kinds of fish. We had red mullet, spiny lobster and octopus, all almost extinct here. I remember those days fondly. We‘ve destroyed everything.” He throws his hands up in indignation at the loss of biodiversity. I ask him what happened to life in the coastal waters around Saida and he has one word for me: “Dynamite”. He is referring to a fishing method where a waterproof explosive is detonated underwater, damaging the seafloor and killing or stunning everything in its blast radius. Extensive use of dynamite destroyed the local habitat, which then became a dumping ground for surplus waste when Lebanon ran out of landfill space.

He throws his hands up in indignation at the loss of biodiversity. I ask him what happened to life in the coastal waters around Saida and he has one word for me: Dynamite.

This feature appears in ISSUE 7: Frozen breath of Oceanographic Magazine