The constant deluge of depressing environmental news threatens to overwhelm me at times.

As a nature-lover who derives endless joy from natural spaces, I want to help, but donating money and making small lifestyle changes doesn’t feel like enough. So when I read about Reef Check California, an organisation that trains volunteer divers to survey marine life on nearshore rocky reefs, my pulse quickened and my mind raced with possibilities. Here was an opportunity to actively help monitor the health of the ocean, with the added perk of experiencing interesting adventures along the way.

Reef Check California was formed in 2005 as an offshoot of the global Reef Check Worldwide Foundation, with a mission to monitor the health of California’s rocky reef and kelp forest ecosystems. To achieve this goal, the organisation trains local volunteer divers to collect data on selected indicator species, which are chosen based on a combination of factors including ease of identification, prevalence, ecological importance, and economic importance. Volunteer divers trained by Reef Check have conducted more than 10,000 surveys in 95 countries and territories throughout the world, nearly 800 of which have taken place in California.

Reef Check CA offers several training programmes throughout the state, including one in the San Francisco Bay Area, my home. The first weekend was held at the renowned California Academy of Sciences in Golden Gate Park, and comprised a day and a half of classroom instruction covering survey methods and species identification, plus a half day in the pool practicing survey protocols. The second weekend consisted of two days of field training in nearby Monterey Bay, a popular area for diving in California.

The first day of training fell on a rare warm summer day in San Francisco. Walking to the research entrance of the Cal Academy of Sciences, I felt a few slight pangs of nervous anticipation, looking forward to the training and not knowing quite what to expect. We met our instructor, Dan Abbott, in the cavernous rear lobby of the academy, surrounded by the echoes of visitors enjoying the exhibits. Dan is the Central Coast Regional Manager for Reef Check CA; in addition to running the training sessions, he also organizes all of the surveys along the central coast. We proceeded up to a mid-sized conference room, and a round of introductions from the ten trainees revealed a diverse mix of participants, ranging in age from college students to retirees. Day jobs included a healthy dose of tech and biotech workers (this is the Bay Area), teachers, small business owners, and aspiring marine biologists. All of us were united by a love of the ocean, an interest in learning more about it, and a desire to help preserve its splendour.

We eased into the training with background information about Reef Check, basic knowledge about the nearshore ecosystem, and an introduction to scientific diving principles. Dan’s teaching style, informative and liberally interspersed with humour, made the material engaging and easy to absorb. After lunch we moved onto the species identification portion of the training and then the firehose opened up to full throttle.

After several hours learning the distinguishing features of nearly eighty species of invertebrates, fish, and marine algae (aka seaweed), my head was swimming. A brief interlude to walk through the native fish aquariums in the academy and practice identification was a welcome break. However, during our review at the end of the day, I was drowning in the inundation of subtle distinguishing factors like body coloration, lateral line markings, fin shape, epipodium texture, and tentacle colour.

At home that evening, my inner nerd kicked in and I spent an hour or so reviewing and categorizing my notes, attempting to attach the information to a scaffolding my bleary brain could retain. Exhausted, I fell asleep with images of abalone and rockfish flitting through my head.

After several hours learning the distinguishing features of nearly eighty species of invertebrates, fish, and marine algae (aka seaweed), my head was swimming. 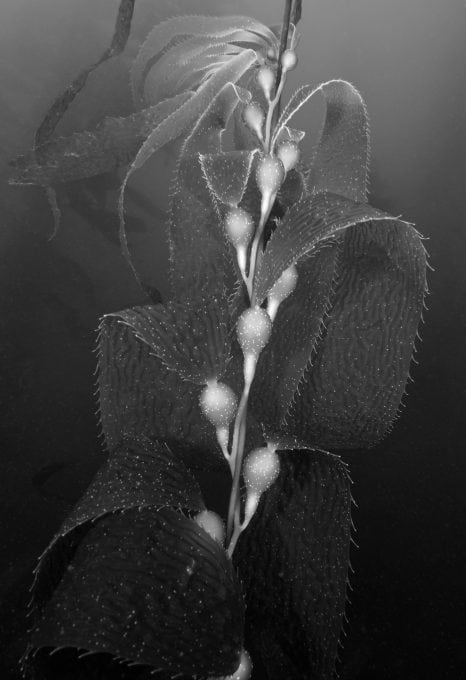 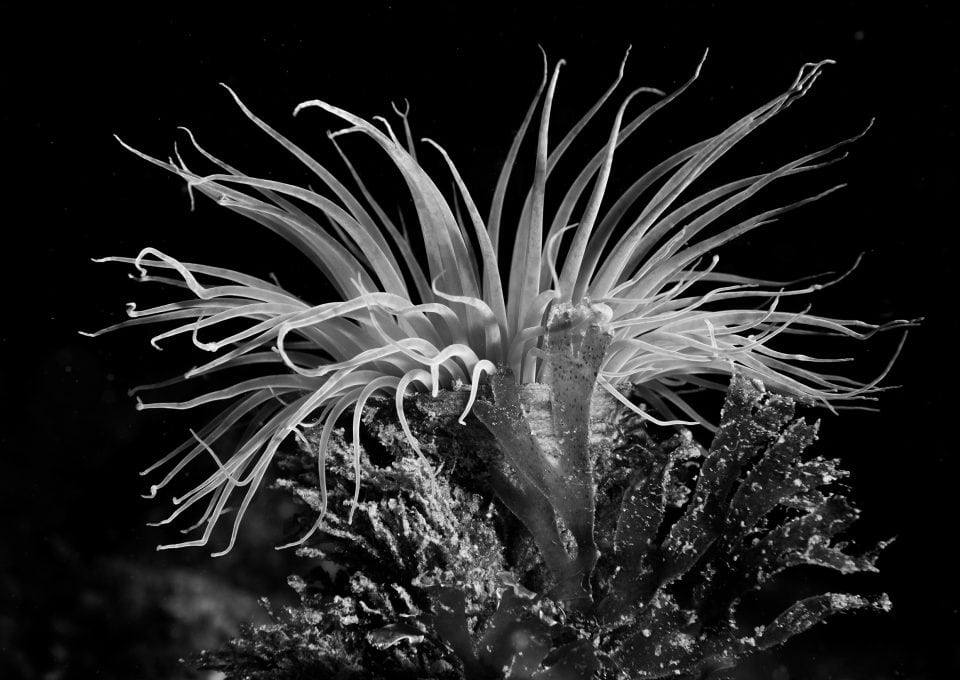 At 9am the next morning, we assembled at the Hamilton Community Center for a half day of pool training, practicing the survey protocols we learned the day before. After the long day of classroom learning, it felt good to be active.

The survey protocols seemed simple in theory, but were surprisingly difficult to execute underwater. Before taking this training, I never fully realised the difficulty of trying to think underwater. As I struggled, I knew that counting and recording objects shouldn’t be that difficult, but my full mental capacity was not available, almost as if I’d had a few drinks. It was an interesting sensation and a highly challenging experience in general.

As the training wrapped up, the lifeguards on duty offered to let us take advantage of a perk of the pool: an indoor waterslide. After the demanding training, the child-like glee of careening down a waterslide was a welcome distraction.

Following a quick break to eat lunch we reconvened at the Cal Academy of Sciences for another afternoon of classroom learning. My brain was still full from the previous day and I struggled to absorb additional information. The training concluded with three species identification tests: invertebrates, algae and fish. My extra studying the night before paid off, as I was one of three people to earn perfect scores on all three tests, earning a snazzy Reef Check hat as a reward.

That concluded the first weekend of training. The experience was interesting, rather gruelling, and ultimately fun, largely thanks to Dan’s humour and the good cheer of the other trainees. Driving home, I basked in a warm glow of weary contentment, happy to be on a path towards actively caring for the planet.

The following weekend we met on the dock at 7am for a final review of survey protocols before boarding the 38-foot Escapade for a day of diving. The morning sun twinkled on a serene Monterey Bay as our boat motored out of the harbour. Nature blessed us with perfect conditions: hardly a wave wrinkled the often tempestuous bay and immaculate blue suffused the cloudless sky.

A short boat ride brought us to Aquarium Reef, offshore of the world-famous Monterey Bay Aquarium, and we anchored near a thick carpet of kelp bobbing on the surface. Our first task was to practice the invertebrate survey, counting individuals of the thirty indicator species along a 30m x 2m transect of the reef. The ten trainees split into two groups, one led by Dan and another led by Keith Rootsaert, a veteran Reef Check California volunteer.

My buddy and I were assigned to Keith’s group, and after suiting-up in our 7mm wetsuits, we followed the surface marker line down to the start of the first transect. Thirty feet down, I was confronted by a mind-boggling site: a jumble of boulders crisscrossed by deep crevices and bristling with purple urchins. Again, I felt the challenge of thinking underwater as I scoured this three-dimensional puzzle, seeking hidden urchins and marking them on my slate while keeping track of my place and not missing any of the other twenty-nine indicator species.

Fortunately, surge was minimal and visibility was twenty-five feet, which is good for Monterey. I can’t imagine attempting that training while being battered by surge in five feet visibility.

The first few square meters seemed to take an eternity to survey, then the density of urchins decreased, and I began to get a feel for examining the reef. Additional species started popping out to me – bat stars, gumboot chitons, rock scallops, sea cucumbers, and the occasional abalone tucked deep into a crevice. Before this training, the reef just looked like rock with a bunch of indistinguishable stuff growing on it. Now I could identify what I was seeing, the reef came into focus. Like picking out familiar faces from a crowd, each species I identified sparked a feeling of connection to the reef. As we traversed the line, an impish harbour seal joined our game, and the rest of the dive was peppered by flybys as he tried to figure out what captured our interest so keenly.

Like picking out familiar faces from a crowd, each species I identified sparked a feeling of connection to the reef. 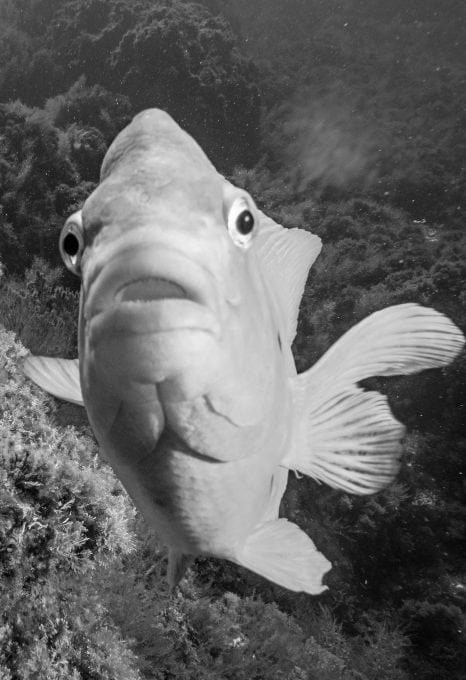 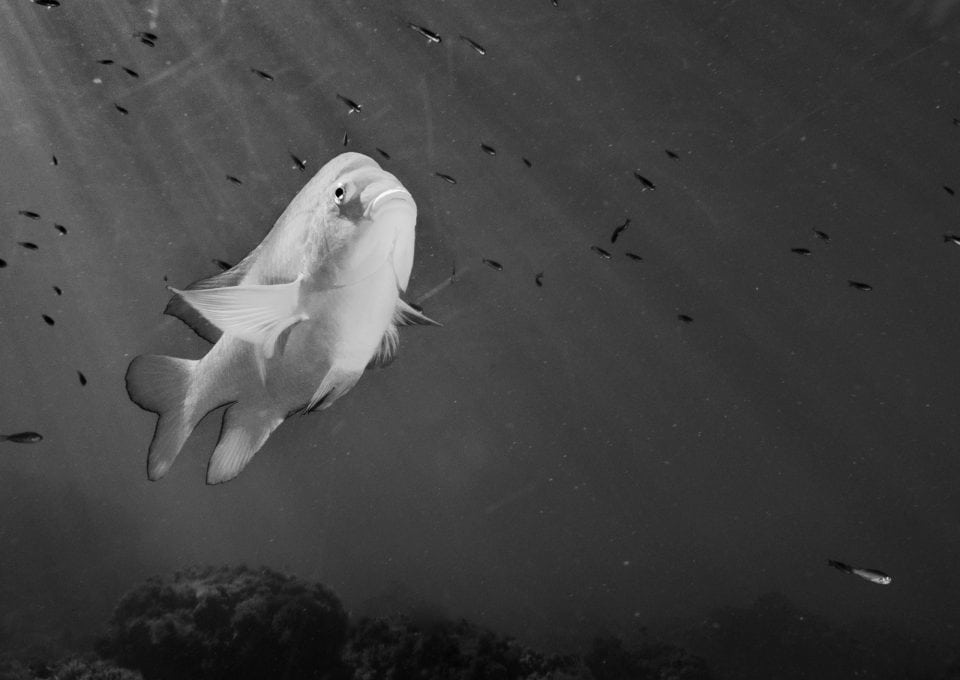 I felt drained but invigorated by the satisfaction of giving my time and energy to a good cause and the promise of doing more.

After 25 minutes we finished the first transect, then started back down a second, parallel transect, this time counting marine algae. Of the ten algae species, only giant kelp was present on this transect, which simplified the task. Although counting all the individual strands, or “stipes”, in each holdfast took some time to master, especially the larger ones containing fifty to seventy stipes each.

Back on the boat, we compared our results with the instructor. For the most part, my results were better than I expected, given how overwhelmed I felt. Keith and Dan provided us tips to improve our technique as we soaked in the sun to chase away the chill from the 53°F water. The next two dives, we continued to practice the invertebrate and algae transects, as well as a third transect type, which bears the cumbersome name of Uniform Point Contact (UPC) and measures the composition of the reef itself. We cruised back into the harbour around 4pm, tired but energised by our maturing survey skills.

Day two of field training started with typical Monterey weather as a heavy fog blanketed the coast. We cast off in a different boat, the 32-foot Beachhopper II, into a calm sea of liquid steel in a windless bay. The goal for today’s dives was to complete our certification in the three transects we practiced the previous day, and start practicing the fish transect. Most new volunteers start off certified for the invertebrate, algae, and UPC methods, and earn the more challenging fish certification later.

Reaching the dive site, Hopkins Reef, we were greeted by a raft of sea otters cavorting in the kelp forest, and our surface intervals throughout the day were filled with their heart-meltingly cute antics. The fog burned off after the first dive, giving way to another gorgeous, sunny day, and visibility was even better than the previous day, up to thirty-five feet at times.

By the end of the second dive, I was feeling much more confident in my invertebrate, algae and UPC surveying skills. On dive three I started practicing the fish survey, although the previously prevalent fish were suddenly shy, so we didn’t have many opportunities to practice identifying them in the wild. Enough of the classroom training came back to me to identify a senorita, black and yellow rockfish, and striped perch, although I confused a kelp rockfish for a grass rockfish.

After the third dive, we motored back into the harbour, arriving around 3pm. Dan presented us with our NAUI Reef Check California EcoDiver certifications for the first three transects and we celebrated with a group photo on the dock. Driving home Sunday evening, I felt enveloped in that same gratifying glow, drained but invigorated by the satisfaction of giving my time and energy to a good cause and the promise of doing more. I looked forward to joining my fellow citizen scientists in monitoring the reefs that provide us with so much wonder, and also helping to preserve that wonder for future generations.

I felt drained but invigorated by the satisfaction of giving my time and energy to a good cause and the promise of doing more.