Just off Sydney’s famous Bondi Beach, a population of grey nurse sharks is threatened by Australia’s shark net programme. A group of local divers is trying to protect the critically endangered species by turning Bondi Beach into an official aggregation site.

Grey nurse sharks, often also referred to as sand tiger and ragged-tooth sharks, are a critically endangered species on Australia’s east coast. As their population numbers are falling steadily, it is vital for humans to protect the last few remaining aggregation sites. One of these can be found just off famous Bondi Beach.

Oceanographic Magazine (OM): How did you come up with the ‘Saving Norman’ campaign? What is it all about?

Duncan Heuer (DH): Grey Nurse sharks, dolphins and seals have lived in the area for thousands of years and even feature in the ancient Aboriginal rock carvings in North Bondi. Despite being a critically endangered species, the grey nurse sharks live next to an outdated shark net which forms part of the government’s shark management programme. Every year, sharks, turtles, dolphins and whales are entangled in these nets across Sydney and end up dying. Waverley council, a local government area in Sydney’s eastern suburbs, voted to remove Bondi’s nets, but the New South Wales state government refuses to allow it until there is enough public support.

Our campaign therefore aims to raise awareness and gather said support to remove the nets. The nets were installed in the 1930s specifically to entangle and kill sharks. They were designed to “rid the ocean of sharks” and were never designed to keep people safe. In fact, nets attract predatory sharks to the area for a free meal. Modern solutions such as drones are proven to be far more effective than shark nets. Despite their fierce appearance, grey nurse sharks are not a threat to divers or swimmers, with teeth designed for capturing prey such as fish and crabs. The east coast population is genetically distinct and extinction is imminent without urgent conservation

They have lived in the area for thousands of years and even feature in the ancient Aboriginal rock carvings in North Bondi. 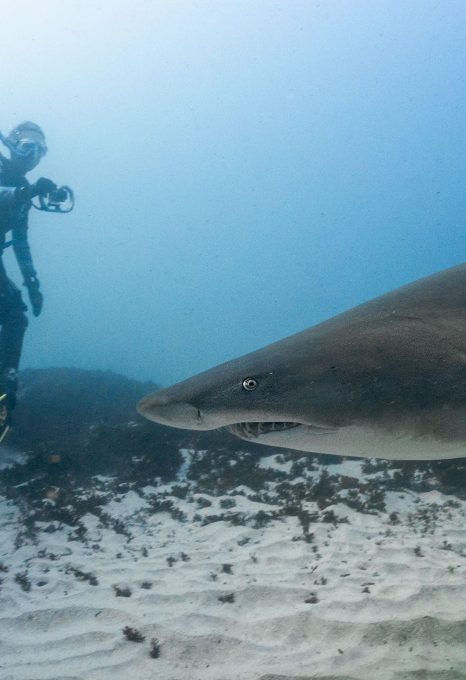 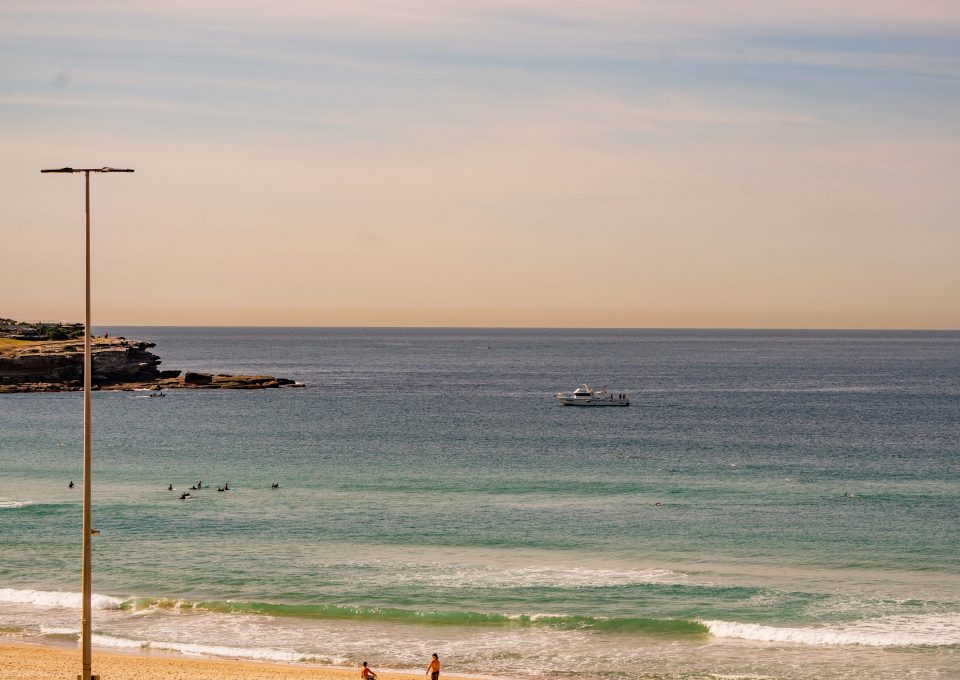 OM: How do you currently gather evidence about the shark numbers around Bondi?

DH: Magic Point near Maroubra Beach is already a critical habitat site. Our project is building the case for Bondi Beach to also get recognised as a critical habitat site due to the high number of individual grey nurse sharks we have been documenting there. My colleague Sarah has taken over the Spot-a-Shark website which uses non-invasive pattern recognition software to identify individual shark sightings. She is rebuilding it as it has been a bit dormant for a number of years. She has been adding all the recent footage we took to see what matches we get. So far, I believe we identified about 40 individuals recorded off Bondi. Our ultimate goal is to get Bondi recognised as an official grey nurse aggregation site to receive protection and get support to remove the nets.

OM: What makes Bondi’s grey nurse shark population so special? Why are you fascinated with this charismatic species?

DH: Grey nurse sharks are critically endangered on the east coast of Australia and are extremely vulnerable to human-induced pressures. Many decades of capture in a variety of fishing methods, including recreational and commercial line fishing and spearfishing, saw a significant decline in the number of grey nurse sharks in New South Wales waters, particularly in the 1960s and 1970s. As of 2013, The Department of Primary Industries estimates that the entire East Coast population is about 1,500 individuals. A popular target threshold for any given species to survive extinction is to have at least 5,000 individuals.

Grey nurse sharks are one of the slowest reproducing sharks. They reach sexual maturity between the age of six to eight years, they have lengthy gestation periods and only produce a maximum of two pups every two to three years. During pregnancy the most developed embryo will eat the others so only one shark is born per uterine horn. This means that their reproductive rate is less than one pup per year. The discovery of a population in a world famous and densely populated beach like Bondi is pretty special. Aboriginal rock carvings in Bondi show the sharks too so they have been in the area for millennia.

OM: What is the main aim of your campaign?

DH: The purpose of the campaign is to get NSW to abandon the shark meshing programme and replace it with more modern alternatives. In order to do that we are trying to make three points to the general public: First of all, the shark nets don’t keep you safe from sharks. They were introduced in 1937 and their specific aim was to kill sharks. They are not a barrier that keeps them out. Newspaper archives online reveals unequivocally that the debate at the time was to come up with a mechanism to “rid the ocean of sharks,” not design a barrier to prevent them from entering the beaches. Secondly, they cause a tragic amount of damage to local marine life. More than 90% of the catch is non-target sharks, rays, turtles, penguins and marine mammals.

Our third point is that there are safer and more effective alternatives to the shark nets when it comes to keeping swimmers safe. Ironically the by-catch in the shark nets have been shown to attract predatory sharks closer to shore while doing nothing to stop the sharks swimming over, under or around the nets. Historically over 60% of shark attacks in Australia have occurred on netted beaches. This statistic is conveniently overlooked in NSW state government rhetoric which favours highlighting the fact that only one death has occurred on a netted beach since 1951. The reason for this is netted beaches are often popular patrolled beaches with quick access to emergency services rather than a statement of the nets effectiveness at keeping swimmers safe.

The discovery of a population in a world famous and densely populated beach like Bondi is pretty special. 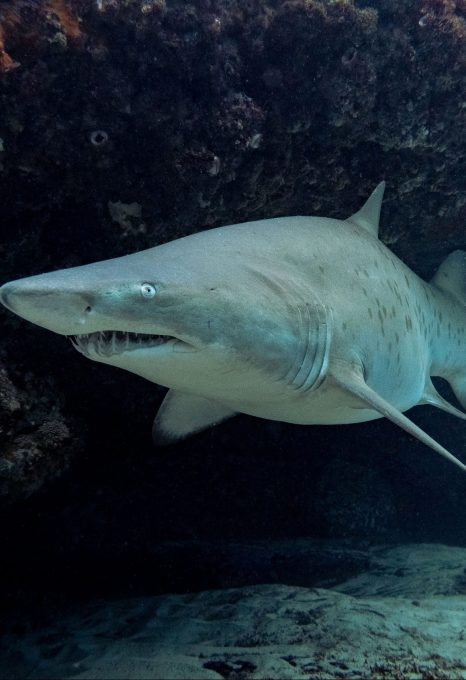 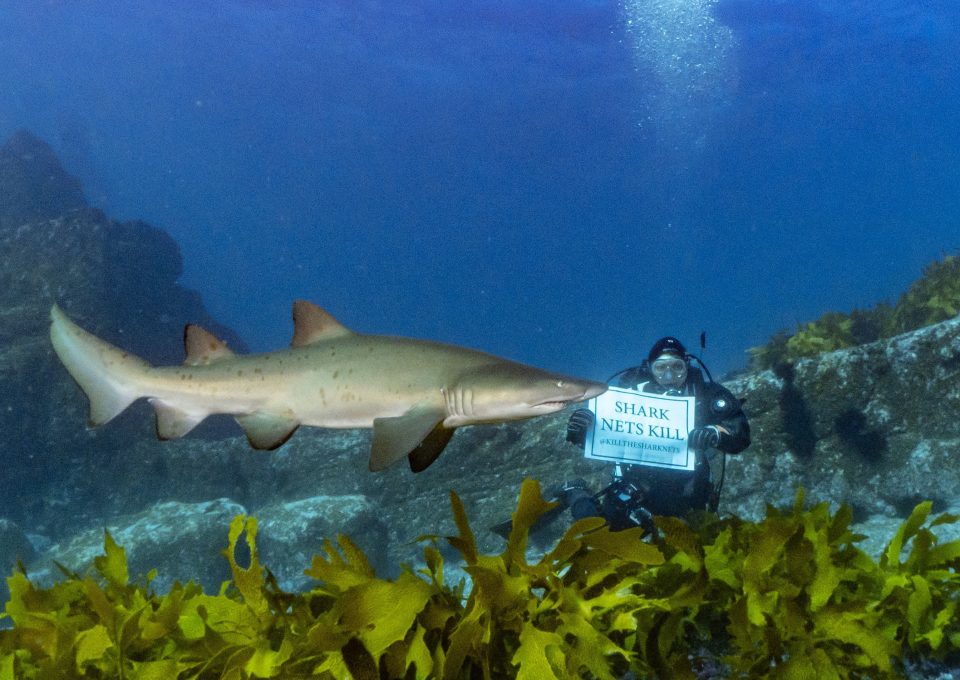 OM: What role does the public play in your campaign?

DH: We believe that a targeted campaign to educate the public, who overwhelmingly think the nets are barriers that keep them safe, is the only way to give the state government the confidence to abandon the shark net programme. The issue we need to address is the risk that a government will remove the shark nets and receive public backlash for that decision in the tragic event of a fatal shark encounter. There are less harmful and more effective modern alternatives such as eco-barriers, drones, shark buoys, personal shark deterrent and education which are more effective means to coexist with sharks and mitigate the risk of a negative shark encounter.

We are working with the local council, who support the initiative, as well as with politicians from both the major political parties. We need to make sure this issue doesn’t become polarising politically because it’s not only an environmental issue. It is also an economic and a public safety issue. We have resisted association with certain animal rights and environmental groups for this reason. We really want the nets to go, and we are concerned that these groups could cause more traditionally conversative voters or fishing groups to fire up and actively work against us. It has been a tricky balancing act and we have had to make some hard decisions and compromises.

OM: By taking photos you were able to identify around 40 individuals in the area. Why do these sharks aggregate here?

DH: We don’t know why exactly they have picked this spot but the species is known to aggregate annually at select spots along the coast. They travel up and down the east coast and we know they return to the same spots annually. The ones we record here, sooner or later get photographed in other known aggregation sites along the coast. In winter, we tend to get more females and during summer we have noticed more males. There is some data that suggests the northern half of the coast gets a higher ratio of males to females and that ratio flips around in the cooler southern waters, but then that changes with the season as they move about. We just don’t know enough about them. We’ve spotted grey nurse sharks in Bondi as long as I can remember. However, it was always sporadic and it has only been recently that we have found a particular overhang where you are almost guaranteed to find them.

We just don’t know enough about them.

OM: Why are shark nets outdated?

DH: Here are some quotes from newspapers back in the day to give you an idea about the origins of the meshing programme in New South Wales. It reveals the motivation for the nets and reveals that the general public didn’t think of the nets as barriers back when they were introduced. On 10 September 1931, The Daily Telegraph wrote that barrier nets are considered an “eye-sore”, while on 19 July 1934, the Canberra Times published a report of the Shark Protection Sub-committee of the Surf Life Saving Association and recommends meshing nets over barrier nets to deal with the shark menace. On 17 November 1937, Labour Daily reported that “the aim of the company being to catch as many sharks as possible”. The Sydney Morning Herald wrote on 7 December 1938: “The public would not regard favourably the enclosure of all beaches with shark-proof netting. Thousands of sharks had been caught since 1937 by meshing for which the Government had entered into a two-year contract, extending to about the middle of next year.” And the Port Stephens Advertiser argued on 18 May 1939, that “It has been proven that… meshing rids the ocean of sharks”.

OM: How can the public help or get more information on the campaign?

DH: They can sign and share our petition on social media. This will greatly help amplify our reach. 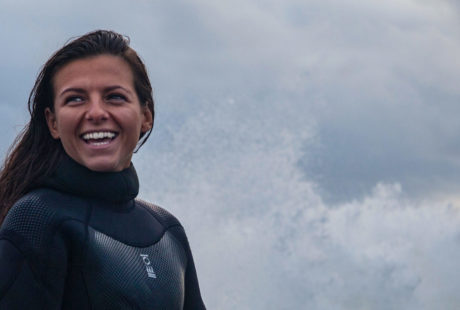 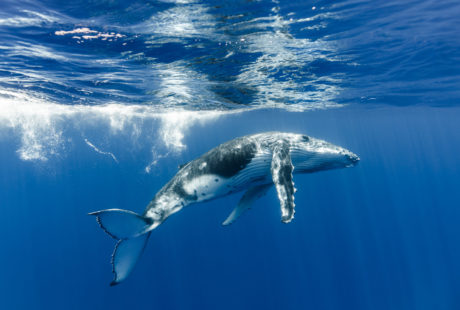