A small lake lies tucked between the hills near Tuzla in Bosnia and Herzegovina. It is one of the clearest lakes in the region, and its features make it popular with fishermen, swimmers, and picnickers alike. When a diver explores this fascinating terrain, he finds an interesting history below the surface that tells an unbelievable story of nature’s resilience, helped by a determined group of friends.

The lake, called Šićki Kop, has only existed since 1987. Before that, it was a simple meadow. When 17,000,000 tonnes of coal were found beneath the meadow, however, the situation changed. Lucrative for investors, the excavation began in 1971 after soil tests were conducted. Massive machines occupied the field and dug tirelessly through the soil, destroying every bit of life. The earth, however, fought back. As the hole got deeper, more and more underground water flowed into it. Miners brought more machines to pump out the water and kept digging, but the lake refused to surrender. Water rushed in until the miners couldn’t pump it out any longer. The miners pulled out the machines leaving a moonlike surface with a massive hole in the middle that gradually filled with water.

Senad Isaković Roko, a biker and inventor from Tuzla, heard about this newly formed lake and saw its potential. Unfortunately, the land around the lake didn’t only need a facelift but full-on plastic surgery. So Senad and a group of friends rolled up their sleeves, cleaned the lake, introduced fish, and planted new trees. But as the land was decimated from any life, the trees needed a lot of attention to survive. The group of friends cared for the trees every day until enough greenery was established for nature to take over and thrive.

It didn’t take long for a problem to arise, however. The mining company wanted to dump slag, a stony matter, where life started to boom. They would destroy not only the lake but also pollute the underground waters that would cause a domino effect and contaminate four more lakes alongside the drinking water.

The pressure was strong, but one event made Senad fight even more. He introduced some brown trouts to the lake that were around 10cm long. A few months later, a fisherman caught one of the trouts and it grew to a staggering 40cm. This meant that the lake was clean, unpolluted, and worth fighting for. The fight lasted for 20 years, and the lake changed significantly during that time. More than 850 trees were planted, and numerous species were introduced into the lake. Senad and his friends formed the ‘Eko – Sport Šićki Brod’ organisation to protect the lake as a legal entity. Today, it is home to 39% of amphibian species found in Bosnia and Herzegovina and impresses with some gorgeous underwater scenery. 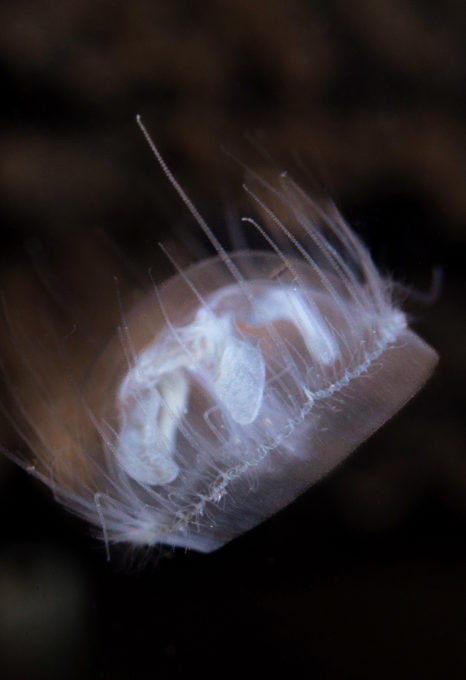 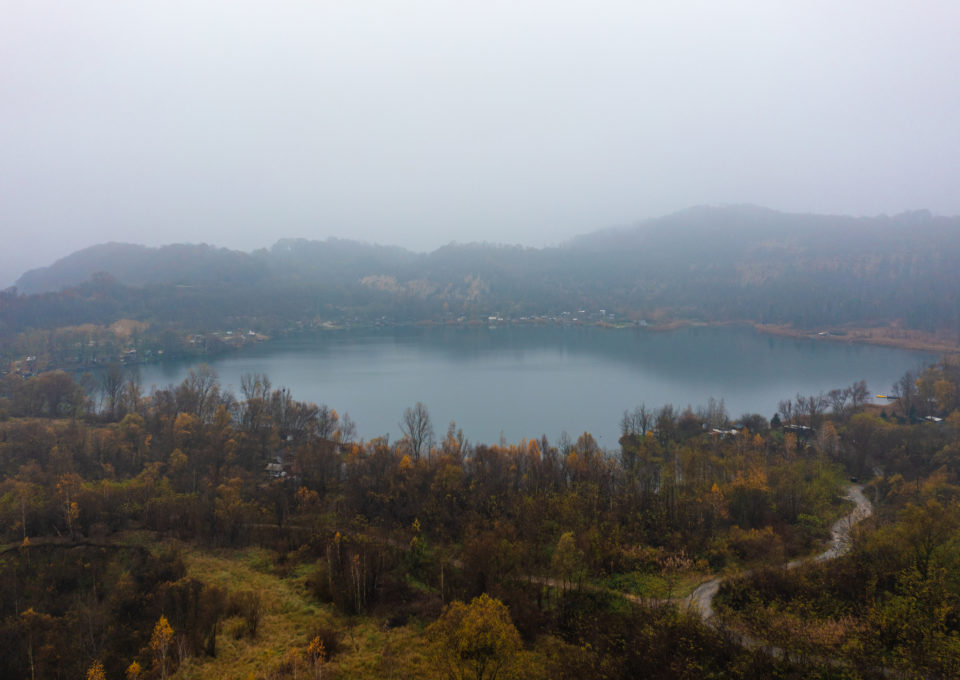 Today, the lake’s beauty attracts many divers from the region, while a local group of divers, called ‘Eko Ronilacka Grupa Invalida Lukavac’ takes care of the lake and helps Senad and his organisation with the efforts to preserve the lake by organising underwater cleanups and managing fish stocks in the lake.

I spent quite a few weekends on the lake. I was amazed by its beauty every single time. It was no different when I visited my friends Elvir and Bilal on one gloomy autumn day. They are local divers who participate in the lake’s protection and are my hosts whenever I dive at Šićki Kop. When I saw their van arriving, I was happy to see them, but I was also anxious to go diving. After a brief chat, we carried the equipment to the lake. A few sunfish curiously came closer as we began preparing the equipment on the small jetty. A splash in the water broke my daydream, and I saw Bilal in the water. I hurried up, connected the last clip on my BCD, put on the mask, tested the regulator, and submerged myself in the water. Nothing implied that this lake used to be a coal mine 40 ago. There was so much life around me, with all shades of green changing in the sun rays. A school of small fish darted out of the dark and came closer to me, unsure which way to go. I headed towards the darkness, and as my eyes got used to it, a gorgeous scene unfolded in front of me. The lake’s weeds and the trees around the shore created a cave-like atmosphere. In that darkness, a freshwater predator came into sight, a pike. I didn’t have to wait long to see its fierce speed as it gulped its prey in one motion. A bit deeper into the weeds, I made out massive carps, hiding even further every time my regulator let out bubbles.

Amazed by the shallows, I went to see what the lake’s deeper zones had to offer. I didn’t need to go too far to see a drop-off and eerie fog separating the two worlds. I slowly went through the fog, and seconds later, my face felt a thousand small needles stabbing my face. The water felt 20 degrees colder. Looking around, I felt as if I was teleported 40 years back when there was only bare earth. There was no life. The wall had only a few patches of black, probably some coal leftovers and only a few fish roam down here. I looked up, and above me was a thick fog or, to be more exact, thermocline. The cold is caused by the underground water continuously filling up the lake with fresh, clear water. I couldn’t feel my face anymore but still felt cold, so I inflated my BCD and passed back through the fog on a pleasant 20 degrees as my heart kept pounding due to the fast temperature change.

Nothing implied that this lake used to be a coal mine 40 years ago. There was so much life around me, with all shades of green changing in the sun rays. 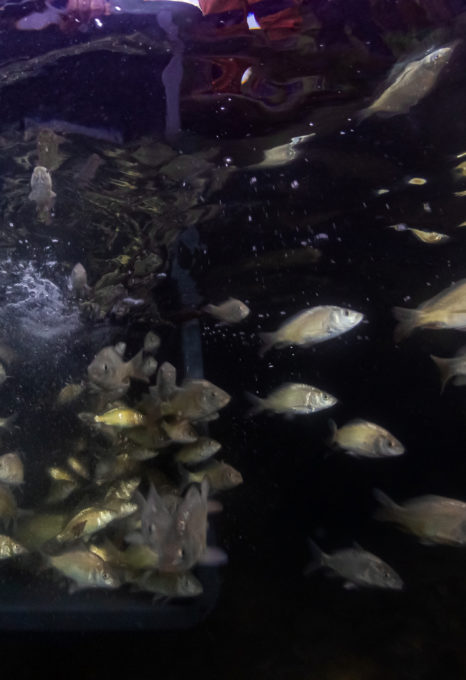 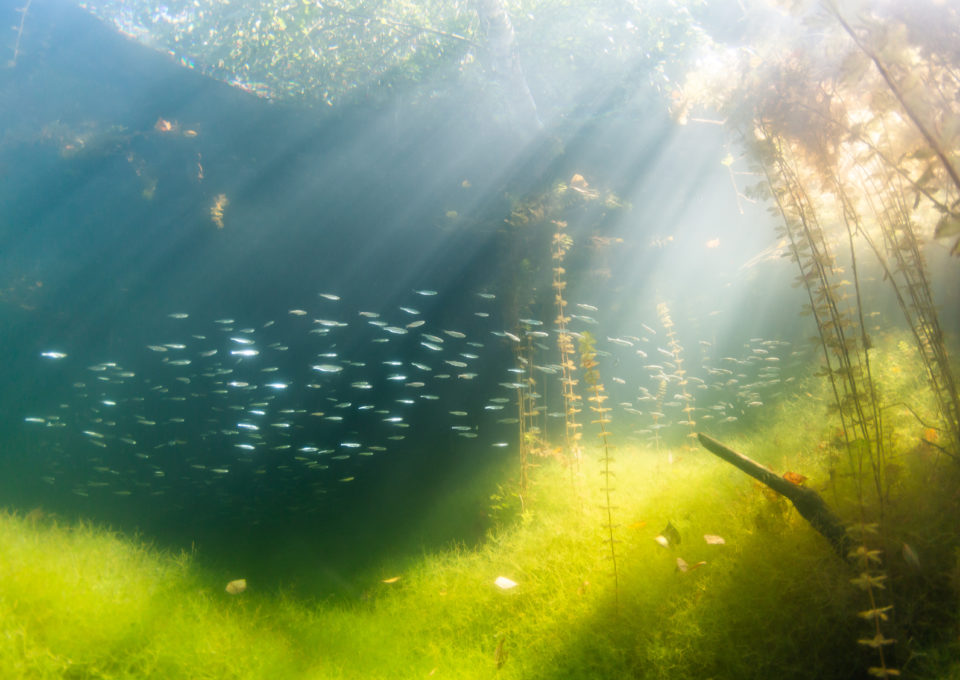 Respecting nature is no longer an option but an obligation.

As I ascended, strange white blobs appeared in front of me. Upon inspection, I saw that they were freshwater jellyfish, only a few centimetres big. I almost missed them, but I was hypnotised the moment I laid my eyes on them. As I slowly made my way back to shore, I couldn’t stop thinking of all the events that made this lake into what it was today. What would happen if they buried this beauty with slag? What would those people who live around it do? Then again, would nature have any defence against toxicity thrown at her? Mining is a crime against nature but also doing nothing is too. That’s why people like Senad and his friends deserve recognition for the impact they made.

I put my feet on the lake’s shallow grounds and entered back into the noisy world. I could see Bilal and Elvir were already out. We began talking about the threats to the lake as we packed up our diving equipment. Bilal told me that fish poachers are still active here. Luckily, they are not as destructive as they used to be. In the past, they were known to use electricity and dynamite to catch fish. Today, they usually utilise ordinary fishing nets. One of the major threats to the lake environment, Bilal and Elvir told me, is the destruction of the lake’s shallows to render it more accessible. Many people still need to learn how important the habitat is for animals.

Overall, the lake seems to be healthy, but as its popularity grows, so should the protection of the lake. WWF’s Living Planet Report 2022 shows a shocking decline of 87% in monitored freshwater species since 1970. This report concludes that lakes like this one are important in keeping the earth’s ecosystem functioning alongside forests, grasslands, wetlands, mangrove swamps, and oceans. People have protected Šićki Kop lake for over 20 years, and I’m sure they will continue doing so through education, determination, and action. Everybody who has the power to take the lake’s faith into their hands needs to know that respecting nature is no longer an option but an obligation.

Respecting nature is no longer an option but an obligation.