Three years ago, I embarked on a photographic project documenting ecologically unique areas that changed how I see the ocean.

My first trip was to Cocos, a tiny island located 340 miles off the Pacific coast of Costa Rica with an impressive list of ecological credentials (alongside a slice of pirate lore), including National Park, UNESCO World Heritage Site and Ramsar Wetland of International Importance. Cocos is well-known among divers as one of the few remaining places in the world with schooling populations of the Critically Endangered scalloped hammerhead shark. The island itself looks like a sparkling emerald set into the vast open ocean. Cocos is a hive for an abundant and diverse array of marine life, both endemic and migratory. Occasionally referred to as “Shark Island”, it contains the highest density of apex predators within the Eastern Tropical Pacific. More than 4,700 marines species have been recorded in its waters to date, including tuna, marlin, manta, dolphin, whales, and 30 varieties of coral. It is no wonder that Jacques Cousteau referred to Cocos as “the most beautiful island in the world”, even naming one of the dive sites after his boat, the Alcyone.

Sharks love a good current, and the waters off Cocos feature a major one: the Northern Equatorial Countercurrent (NECC), which also impacts several other ecologically important locations such as the Revillagigedo Archipelago and the Central American Dome. The currents are so strong at Cocos that it is recommended for divers to carry GPS devices on all dives. On one dive at Alcyone (which is often not diver-friendly due to surface current strength), I nearly won a free trip to the Galapagos by underestimating them. The second I hit the water, my bulky camera system caught the rushing water and acted like a sail in the current, and I missed connecting with the down line anchored to the dive site below. In the blink of an eye I was whisked away by well over 100 feet, drifting further from the group every second. Quickly inflating my surface marker buoy and using my whistle, I was able to gain the attention of our zodiac tender who picked me up to rejoin the group, humbled and prepared for the inevitable (and well-deserved) ribbing I’d be getting over lunch.

The island has the appearance of a sparkling emerald set into the vast open ocean. 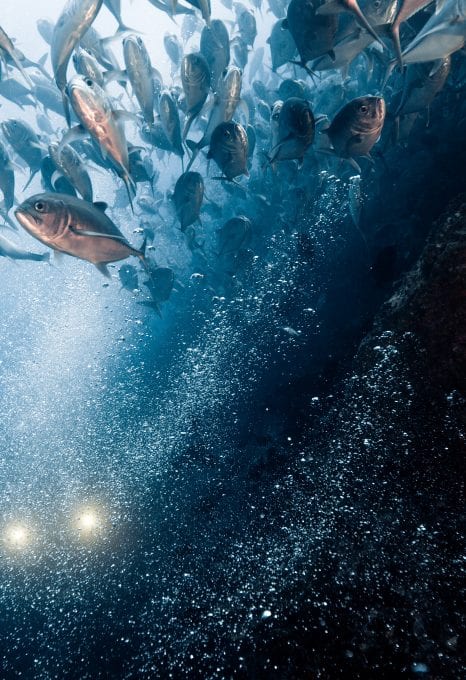 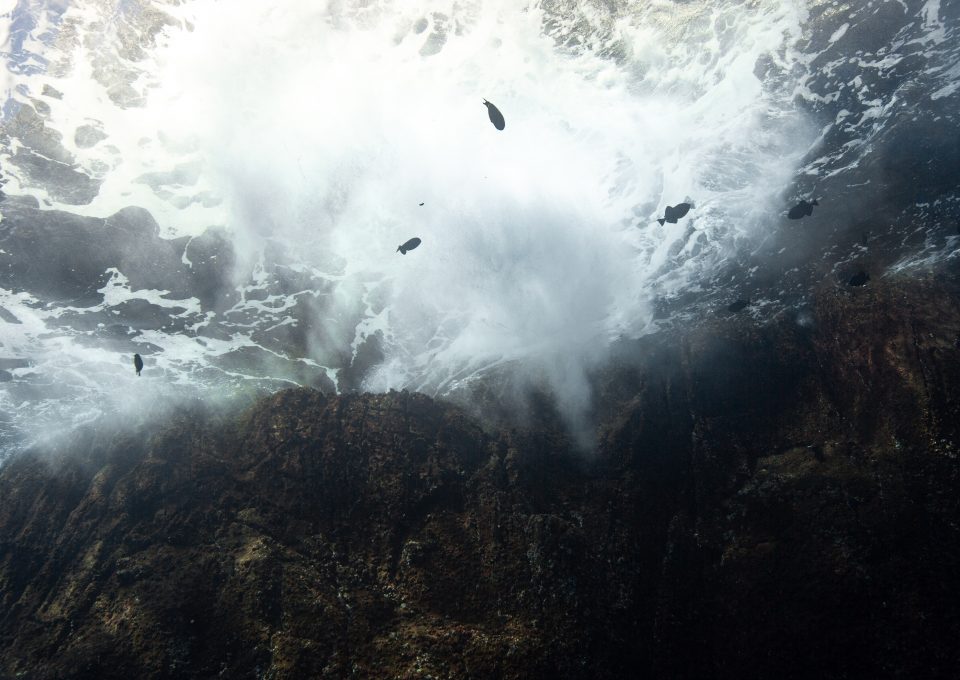 After I returned from my trip to Cocos I started reviewing the images and delving into articles and research, wanting to understand more about the island and why it contains such abundant biodiversity. I fell down a rabbit hole of information, and I tumbled deeper and deeper with every study. I had been under the impression that Cocos was an isolated island – which it is, at the surface. It is not connected to any continent and the nearest landmass is a 40-hour sail from the port city of Puntarenas. However, I was viewing it from a terrestrial perspective. It’s underwater areas are highly connected via arteries of currents and corridors in between other biodiversity hotspots. Some of these enrich the island, such as the Central American Dome, while others benefit the migratory animals, such as the corridors connecting Cocos to seamounts and other aggregation areas.

The Central American Dome (also referred to as the Costa Rica Thermal Dome) is an oceanic phenomenon unique on Earth, discovered in 1948 by bathythermographs on fishing vessels. A cold, deep, nutrient-dense current containing one of the highest chlorophyll counts in the world shoots towards the surface at a velocity of up to 16 times the flow of the Amazon river. When this water reaches about 50 feet, it is hit with sunlight, a combination that produces an enormous algae bloom, igniting the entire food chain from plankton to blue whales. The dome is somewhat elusive, as it is nearly imperceptible from the surface, changing both in size and position along the Central American coast. While the nucleus is located approximately 9°N and 90°W offshore Costa Rica, throughout the year it is in constant migration, contracting and expanding by approximately 124 to 620 miles in diameter due to influences of trade winds and three major currents, of which the NECC is the most significant. The dome was established as a Mission Blue Hope Spot in October 2013, and while its exact ecological impacts are still being studied, the high nutrients are a virtual buffet for a dense concentration of species, enhancing the productivity of areas within the dome’s diameter, which seasonally extends to Cocos.

I had been under the impression that Cocos was an isolated island – which it is, at the surface.

Forty miles away from Cocos, a deep volcanic mountain range rises from the seafloor, the summit peaking at a depth of 600 feet, surrounded by a chasm of deep ocean. Alongside a team of scientists, world-renowned photographer Brian Skerry conducted submersible expeditions to Las Gemelas Seamount in 2009 and again in 2012 to study the location, with each dive revealing extraordinary habitats. Their fascinating accounts published in National Geographic in September 2012 describe descents through the rich blues of the open ocean, sinking through the eerie tint of the twilight region of the ocean. Nearing the summit, the submersible lights revealed a remarkable environment, including glass sponges, octocorals, black and stony corals, calcified hydroids, and a significant number of species not yet described in scientific literature. They reported primarily using visual observation to count biomass, but in some areas, it was so thick that it required reference to video recordings. Over the course of several expeditions, the team found that Las Gemelas appeared to contain one of the highest concentrations of fish in the tropics worldwide – an estimated 7.8 tonnes of fish per hectare.

As the explorations continued, it became apparent that, although these areas of the seamount were being seen for the first time, humanity had left its fingerprint years before. During both expeditions every submersible dive reported layers of rope and fishing line along the reef, of which the pilot would need to carefully navigate around during the exploration to avoid entanglement. While spectacular diversity was observed, it was noted that that smaller fish accounted for up to 80% of the biomass. Local fishermen provided accounts of catching up to 1,000 groupers per day at the seamount in earlier times, and it was considered that as the larger fish stocks were exhausted, a population boom of smaller prey would occur.

Local fishermen provided accounts of catching up to 1,000 groupers per day. 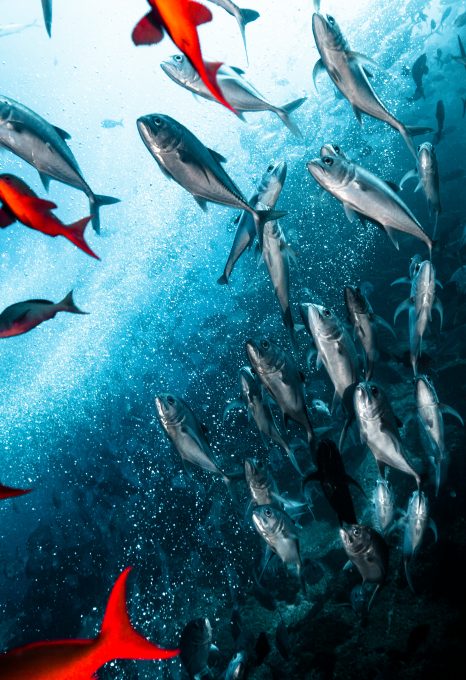 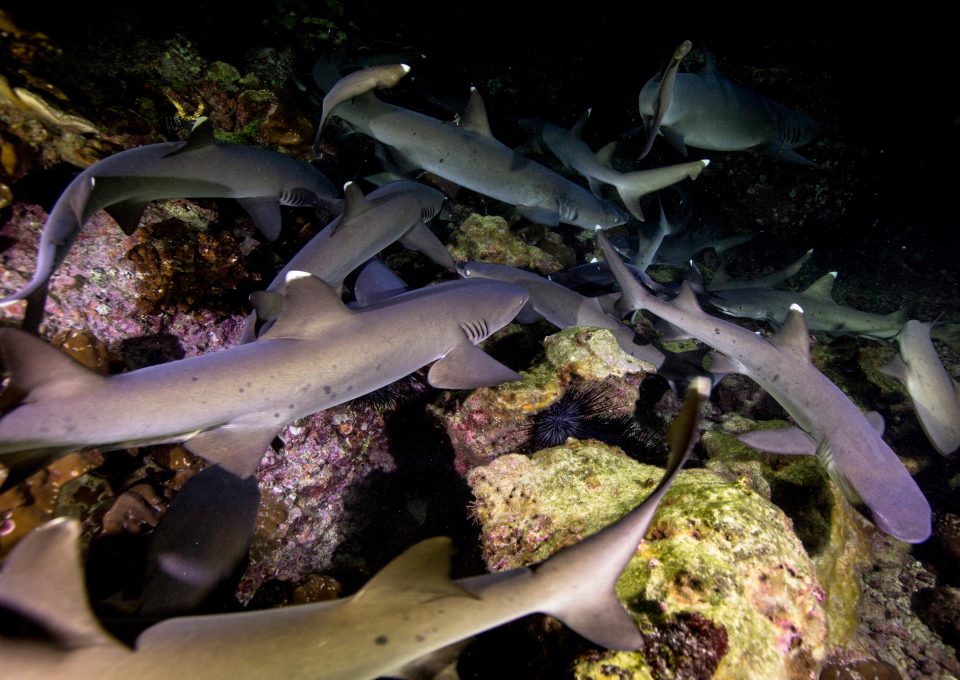 What other corridors, swimways, and domes are just waiting to be discovered?

An exciting study published in Revista de Biologica Tropica on March 24, 2020, documented the first evidence of the critically endangered scalloped hammerhead shark making repeated traverses between Cocos and Las Gemelas Seamount between 2015 and 2016. Could Las Gemelas be a deep-water foraging site? The results of the study were exciting news, as evidence of a corridor between the two ecological hotspots could provide a stronger case for expanded protection. Cocos has been protected since 1978, and Las Gemelas from 2011, but illegal fishing operations lurk just outside the protection zone targeting the sharks within the corridor. As it is so far away from any major landmass it is difficult to patrol, and other than one ranger and perhaps a couple of university students conducting research in the jungle, the island is uninhabited.

In May 2020 there was further evidence of connectivity with the announcement of Mission Blue’s newest Hope Spot: The Cocos Galapagos Swimway. Led by legendary oceanographer Dr. Sylvia Earle, the Mission Blue team conducted expeditions to Cocos in 2015 and 2017, to study the patterns along a 75,000 mile migratory corridor between Cocos and Galapagos, Ecuador. MigraMar, a network of groups conducting scientific research for migratory species in the Eastern Tropical Pacific, documented at-risk species such as whale sharks, silky sharks, scalloped hammerheads and green sea turtles using the corridor, with tagged species making repeated movements along the submarine mountain chain, potentially utilising the basalt for navigation. In combination with MigraMar, several national and international organisations joined together to submit a nomination for the swimway to receive conservation support as a Hope Spot. The swimway is not just a vital connection for the sharks and other migratory animals, it facilitates collaboration between international scientific and conservation groups for the protection of species, utilising what is increasingly considered as a triangular artery between Cocos, Galapagos, and Malpelo, Colombia.

When I first began my project I thought of Cocos as an ecological iceberg, isolated by vast open ocean – but with each new discovery by scientists and exploration teams, I now wonder whether the island is itself just the proverbial tip? Cocos is surely not alone in this, with an estimated 100,000 seamounts blanketing the floors of our ocean planet. What other links will be found between other seamounts and other biodiversity hotspots, and what other corridors, swimways, and domes are just waiting to be discovered? As a photographer, connectivity between abundant habitats now seems only natural, and has resulted in a more thoughtful perspective to resulting images. It has led me to approach a subject with a far more expanded view, to include their relationship with the environment – which I am increasingly finding as fascinating as the individual subjects themselves. Much like currents and corridors are pathways between vital hotspots, continued science, documentation and exploration are the arteries linking different critical advancements within the conservation sphere.

What other corridors, swimways, and domes are just waiting to be discovered?