Lizzie Daly is a wildlife presenter, filmmaker and Animal Movement PhD Scientist. She has worked on productions for COP26, the BBC, National Geographic, Animal Planet and more. She has always had a passion for the ocean and continues to celebrate Welsh wildlife. 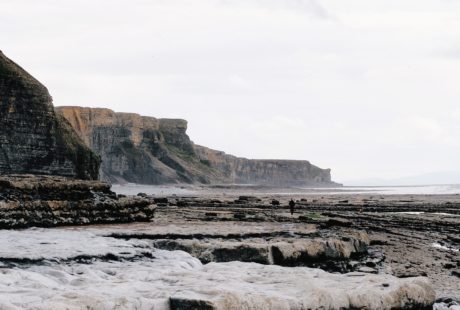 I fell in love with the sea on my first summer visit to Pembrokeshire, Wales. The fuzzy feeling of the bubbling tide as it wrapped itself around my numb feet. The glow of the sun as I bobbed around the in the murky waves. It felt so invigorating. That feeling has never gone away.

Wales is home to 870 miles of jaw dropping coastline: sand dunes, vast estuaries, towering cliffs and ancient bedrock. During low tide at Marros Beach in Carmarthenshire, the sea retreats to reveal an ancient, submerged forest that dates back to before the last ice age more than 13,000 years ago – a time when the Bristol Channel would have been a great plain linking the British Isles to the European mainland. Every summer, Skomer Island welcomes back half a million Manx shearwaters that have just made the 7,000-mile migratory journey to South America and back to breed. I feel lucky to call Wales my home.

Despite all of the natural beauty, the thing that makes the Welsh sea so spectacular, to me, is the people. One Welsh tale speaks of Dylan, an envious sea god, who sent a huge wave to steal an old man’s three daughters. He regretted his evil deed and turned the girls into gulls, belonging both to the sea and the land. Ocean folklore is perhaps the finest reminder of our ancient connection with the sea.

As a scientist and wildlife filmmaker, I’ve had the privilege of meeting people from all over Wales, learning their stories. Last summer I spent time out in the Celtic Deep with a fisherman called Fen. He has worked on Wales’ waters for more than 30 years, moving from trawlerman to shark snorkeller. He is a man with a big heart, a quick wit and a curious spirit – a surprising and satisfying contrast to the harsh environment he spends his days in.

On another occasion, I was called about a washed-up, critically endangered Kemps Ridley Turtle. As I arrived to the local beach, the air fresh after a storm, I was met by a local jewellery maker who lived at the water’s edge. Open- and ocean-spirited, she welcomed me into her home and studio. She shared her story, how the sea serves as a constant source of inspiration in both life and work.

In November 2021, I sat at the heart of COP26. It was Ocean Day. I was nervous. As I sat opposite Vice President Al Gore, surrounded by his security team, he asked me if I knew the “lovely journalist Kathy from Wales who lives on the south coast”. You may think asking if I know one particular Welsh person is a little odd, but actually his request spoke to me, resonating with the community-focussed and grounded connectedness of the Welsh people, especially those of us filled with the spirit of the sea.

Now, it’s winter. Standing on Southerndown Beach, everything is calm and grey (obviously). All I can hear is the wind and a distant pair of choughs. As I look out, I wonder how we are going to achieve real change for our sea. I realise that my hope for change does not rely on political discussions and climate agreements, a stream of video calls or written policies. It relies on people. People who have determined and positive spirits, who want to make change, from journalists to jewellery-makers and everyone in between. As I breathe in the salty air around me, I feel buoyed by the community I have around me, big-hearted and connected. I feel energised. I feel hope.