It is midnight and we are somewhere south of 70°S in the Weddell Sea, Antarctica.

The sun just dipped below the horizon, but not for long. It will appear again within the next 30 minutes leaving us with the most amazing showing of twilight colours: the sky is lit up in shades of orange, shifting to pink, to purple and then to orange again. I am aboard an Antarctic research vessel studying seals for three months. I was supposed to start my next four-hour shift of seal observations at midnight – but I never left the bridge earlier in the evening when I should have gone to bed. There was no cloud bank on the horizon and no wind blowing outside, and I knew that we would be treated to two hours of vibrant colours lighting up the sky, reflected off the water and fields of ice. Everywhere there are scientists and ships crew striding around, sleep deprived but too afraid to go to bed in case they miss any of this.

But now, my shift is about to start, and I haven’t slept in more than 24 hours. A fellow sealer will come and relieve me at 4am when I have about four hours to sleep before we have a weather briefing at 8am. There we hear if we are flying to do seal counting transects from the helicopter (if the weather is good) or if we are staying on board the ship to continue with ship-based observations (if the weather is bad). We are one month into a three-month summer expedition and this routine will be repeated until we finally leave the sea ice. At the end of the expedition we will have collected roughly 250 hours of observations and 15 flights covering somewhere between 180km2 and 350km2. To put into perspective the cost of this operation: the running costs of the ship per day is 40,000 NZD and 10,000 NZD per hour of flying: that is more than 10 000 NZD per km2. To be fair, this number doesn’t just include our work, there are many other scientific projects running in parallel.

Counting seals in the pack-ice is incredibly expensive, labour intensive, heavily dependent on the weather and many hours of work for relatively little return. Not to mention that the position of the ship (and flights leaving from it) is determined by sea ice concentrations, and other scientific or logistical endeavours. This is why scientists still do not have accurate population estimates for most Antarctic species. For example, the Weddell seal population estimate lies somewhere between 200,000 and one million individuals, and only recently eight new Emperor penguin colonies were discovered, increasing the population size by approximately 10%. Perhaps the most obvious example of vague population estimates is that of the crabeater seal: it is estimated that there are between seven and 30 million crabeater seals. How do you decide on effective conservation and management policies when the population lies somewhere between seven and 30 million individuals?

Everywhere there are scientists and ships crew striding around, sleep deprived but too afraid to go to bed in case they miss any of this. 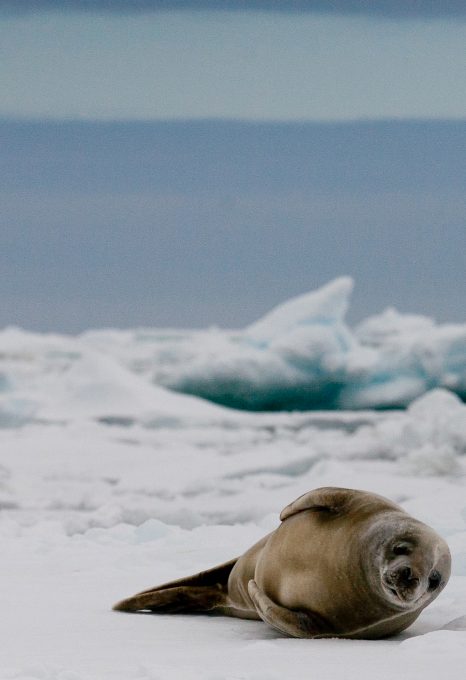 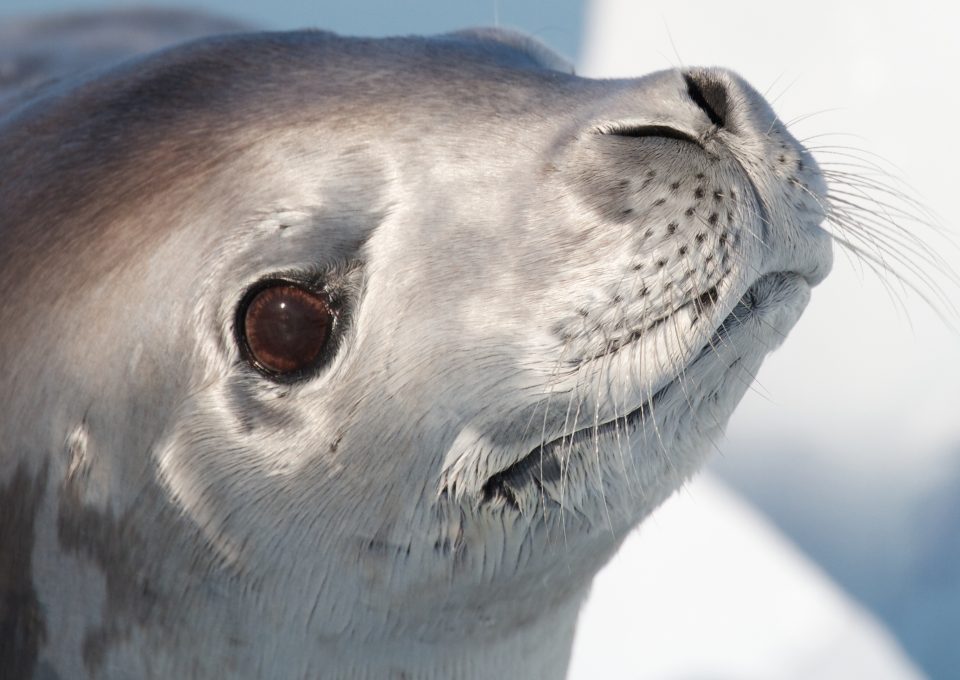 Crabeater seals, often referred to as the most abundant marine mammal in the world, mainly eat Antarctic krill – a key prey species for many Antarctic species, including fish, seals, penguins and whales. Antarctic krill are also a target species for fisheries in the Southern Ocean. If there really are 30 million crabeater seals in the Southern Ocean, then they would have a huge impact on krill abundance, which would influence the entire food web and catch available to fisheries. On the other hand, fisheries could have a measurable impact on crabeater seals. Knowing how many animals there are in a population forms the basis of any ecological study. We cannot make decisions about the conservation of a species, if we don’t know how many there are. But how do we count animals that we cannot get to?

Satellite images and technological advancements have enabled scientists during the last decade to develop methods to count species such as Emperor penguins, Adélie penguins and Weddell seals from space – or at least from satellite images. With funding from The Pew Charitable Trusts, Dr Michelle LaRue, Dr Leo Salas and myself used satellite images of Antarctica and the power of citizen science to uncover the secret lives of crabeater seals in the largest ever survey of the Weddell Sea – one of Earth’s last wildernesses.

“We searched satellite photos for crabeater seals in the Weddell Sea, with help from more than 2,200 volunteers around the world covering an area of sea ice the size of Fiji [18,219 km2],” says University of Canterbury (UC) Gateway Antarctica scientist Dr Michelle LaRue, the project leader and a lecturer of Antarctic Marine Science in UC’s School of Earth and Environment | Te Kura Aronukurangi.

“Working with volunteers, means that people without typical scientific training get to be directly involved in the scientific process,” added Dr Leo Salas from Point Blue Conservation Science, a non-profit organisation from California dedicated to developing climate-smart science for conservation.

We focused initially on the Weddell Sea for two reasons: firstly, global leaders will consider protecting over 2.2 million square kilometres of the Weddell Sea this October when the Commission for the Conservation of Antarctic Marine Living Resources (CCAMLR) annual meeting takes place. Secondly, the Weddell Sea is mostly covered in a thick sea-ice built up over multiple years. In fact, during my previous Antarctic expedition I mentioned at the start, we were able to reach areas in the south-western Weddell Sea due to favourable weather conditions that was last visited by an Antarctic ship in 1995.

We cannot make decisions about the conservation of a species, if we don’t know how many there are. 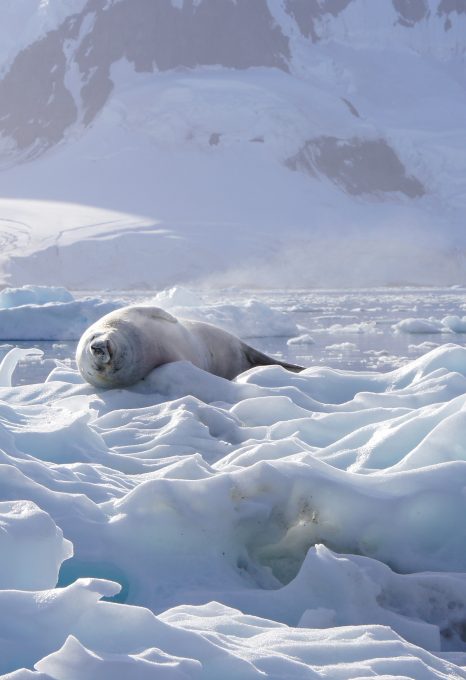 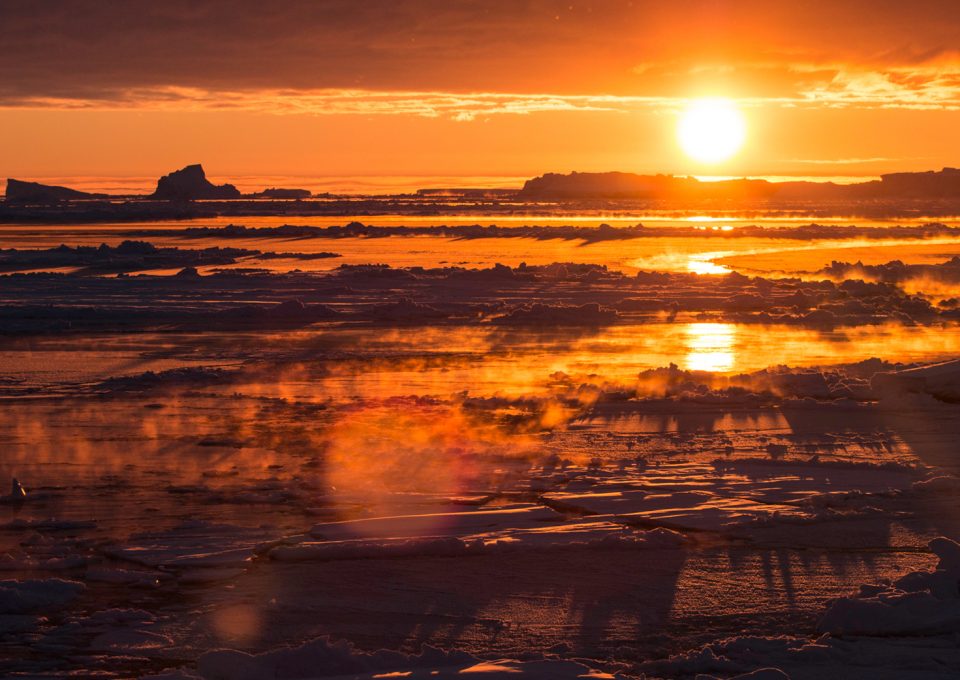 This multi-year sea ice means that most of the Weddell Sea has never been surveyed for seals before, even more so in the seals’ breeding season in spring, when sea ice concentrations are still too high to make the areas accessible to ships. The prospect of satellite images allowing us to find seals in areas never searched before, during a time of the year hardly ever surveyed, was very exciting. But up to this point, satellite images have only been used to find seals and penguins in Antarctica that occur on fast-ice (ice attached to the Antarctic continent). It is fairly easy to spot a dark blob on a flat white surface. However, this was the first attempt to use volunteers to find seals in Antarctic breeding on the sea ice.

By nature, sea ice is uneven. Think of it as blocks of ice floating in a glass of water: they are constantly smashing up against each other, causing the edges to form ridges and melt pools forming in the middle. When the sea ice refreezes, the ridges are locked in and the melt pools freeze over creating a mesh of different shades, colours and surface topography. We weren’t sure whether this would work – we didn’t know if people would be successful at finding seals on the jumbled sea ice.

When we looked over the results the first time, we knew very quickly that it would not be possible to get a very accurate estimate of crabeater seal numbers. But, people were able to see them, and with quality control measures in place, we could model their potential distribution based on their preferred habitat throughout the Weddell Sea. In other words, we could say: “we know where they are based on these environmental conditions, based on those environmental conditions, where else can they be?”

Crabeater seals were mostly found away from the ice edge and into the pack ice, over areas where the water is a 1000 m or deeper, and away from the continental shelf edge. This is typical Antarctic krill habitat – the prey that makes up 90% of a crabeater seal’s diet. This was surprising and a novel finding seeing as crabeater seals spend their entire breeding season on the ice, and do not go into the water to hunt. Why would they then prefer to be close to their main food source, if they are not eating during this time? We suggest that it is because they are such specialised predators and it would be easier for them to be close to their preferred food source once they are done breeding and to replenish the body condition lost while breeding. Hauling out further away from their food resources mean that they would spend more time searching for prey after fasting for several weeks while breeding.

Crabeater seals also preferred to haul out in areas where the ice concentration was more variable – but not too variable – throughout breeding season. Ice concentration variation is a measure of leads and cracks opening up for the crabeater seals to access the deeper parts of the ice-covered Weddell Sea. They need to be deeper into the pack-ice because it is harder for predators to find the exposed mom and pup. However, the ice cannot be to unpredictable and break up when a female is still nursing her pup on an ice floe – it needs to be stable for the 2-3 weeks that it takes for a female to successfully wean her pup.

Although we were not able to count all the seals, we were able to make some new and important discoveries about their breeding habitat. Knowing crabeater seal distribution is valuable conservation information for the planning of the Marine Protected Area in the Weddell Sea. There are several world class scientists working on ways to improve these methods to eventually get to better population estimates than seven to 30 million individuals. One option would be to do a ground validation count; that is to take satellite photos at the same time while doing ship- and helicopter-based surveys. Of course, this means that there will be several more expeditions where I’ll be standing on the bridge for hours on end watching the shadow of the ship gliding across the ice in front of me. A prospect that I am certainly not complaining about.