Oceanographic Magazine (OM): How did you get into drone videography?

Scott Fairchild (SF): I’ve been lucky to be able to travel the world and photography has always been a joy I embraced throughout those travels. When drones came along, it created possibilities I had never previously even considered, such as looking for and photographing sharks! I was a scuba diving instructor earlier in life and have spent my life in and around oceans, sharks, and other marine life. Combining my loves of photography and the ocean was only natural.

SF: I’m lucky that I’m doing mostly ocean photography, so there are no trees which is always a major problem for drone photography. Well, I do have to navigate a lot of palm trees on takeoffs. Honestly, it’s pretty easy to fly them in general, but it takes patience and a good grasp on spatial awareness when filming wildlife in an ever-moving landscape like the ocean with waves, and so on. That’s why I fly low too. The hardest part of it is dealing with water reflections and the sun since I’m filming animals that never move in a straight line and that are totally unpredictable. It’s not like they’re posing for me.

OM: Have you always been fascinated by sharks?

SF: Yes, aren’t we all? I grew up in the water, playing water polo. I surfed and went scuba diving. Sharks peaked my interest early on. I was certified to dive as a teenager and my brother and I became scuba diving instructors as summer jobs during college. I worked in Hawaii and the Virgin Islands amongst other places, and I was lucky to have a lot of positive shark encounters. I quickly learned they’re not the monsters the media likes to portray and grew to love swimming amongst them. 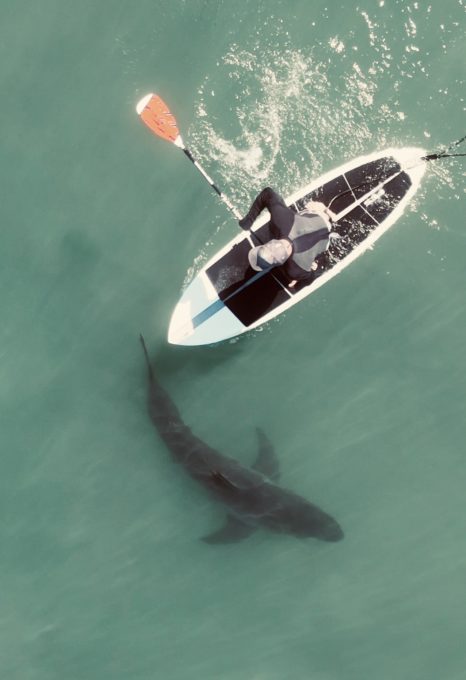 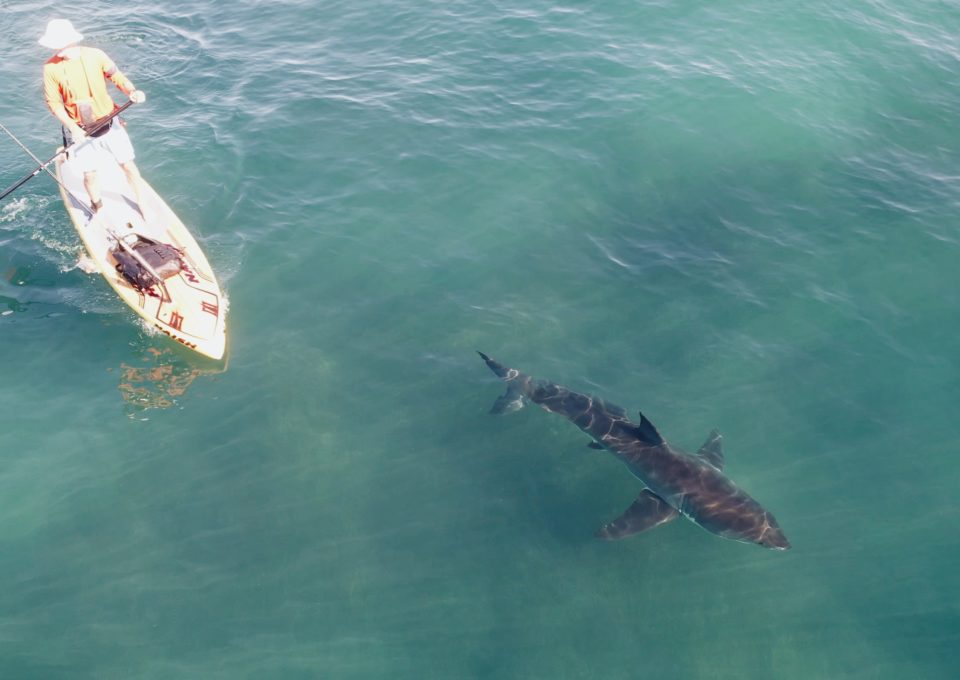 OM: On your Instagram channel, you show the unseen side of water sports around California: The hundreds and hundreds of unseen shark encounters. What’s the main aim of this channel?

SF: It has been, and remains, just a hobby and a passion for the things I love. But unknowingly, I’ve come to realise that I’m changing minds. The channel seems to create a love for sharks that were once a source of fear for so many. I get countless messages saying that my videos have changed people’s minds.

OM: How are you trying to advance shark conservation?

SF: I don’t think of myself as a shark conservationist but I guess I am. They are incredibly important animals that are vital for the health of our oceans and thus our planet. Because of JAWS, most of the media, including TV channels and movies, we simply don’t like sharks. Yet we love lions, tigers, bears, and so on. Sharks need our respect and, more importantly, our protection.

OM: Tell us about your favourite moment you captured with your drone?

SF: That was probably the one time I filmed a father and his rather young son with a large great white shark while they were out surfing. Normally the surfers never see the sharks but in this case the dad did. Without skipping a beat, he waved his young son over and pointed it out. They both just watched calmly and respectfully as the great white shark cruised right by them. And then they both went right back to catching waves!

OM: How do you feel when media outlets share your videos with sensationalist headlines?

SF: To be frank, it angers me. It’s cheap and lazy journalism. It only fosters the message that sharks are mindless killing machines which is simply not true. As they say in the news, “if it bleeds it leads”. I get it, it’s all about sales. But it’s important that people realise the truth and that we protect these amazing and vital animals. I’m very direct with saying that my images are not allowed to be used unless it’s a shark positive piece.

OM: What more needs to be done in California to protect great white sharks?

SF: There are actually a good number of laws in place to protect the great white sharks. Sadly though, as we’ve seen a lot of this summer in places like Florida and Australia, there are still people that take part in sometimes even sanctioned organised shark killing tournaments. Purely for the joy of killing them. What a mindless and ignorant thing to do. But with pages like mine, and people like Cristina Zenato actively teaching us about sharks, including great white sharks, hopefully more and more laws will be put in place to protect them. Everyone is a proponent of laws that protect animals like tigers, whales and turtles. We need that same kind of love and passion for sharks.

To be frank, it angers me. It’s cheap and lazy journalism. It only fosters the message that sharks are mindless killing machines. 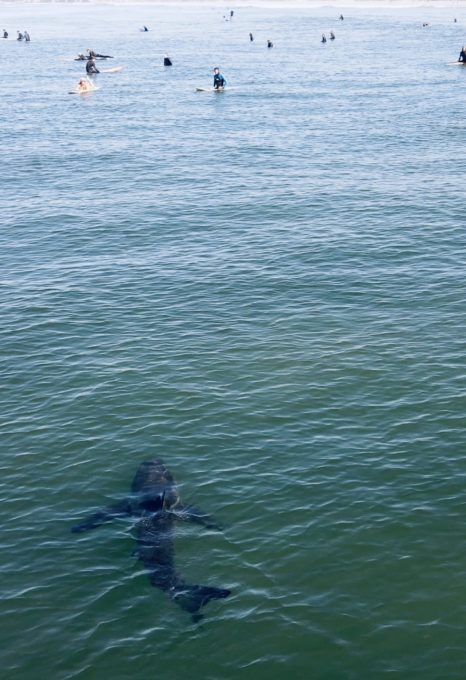 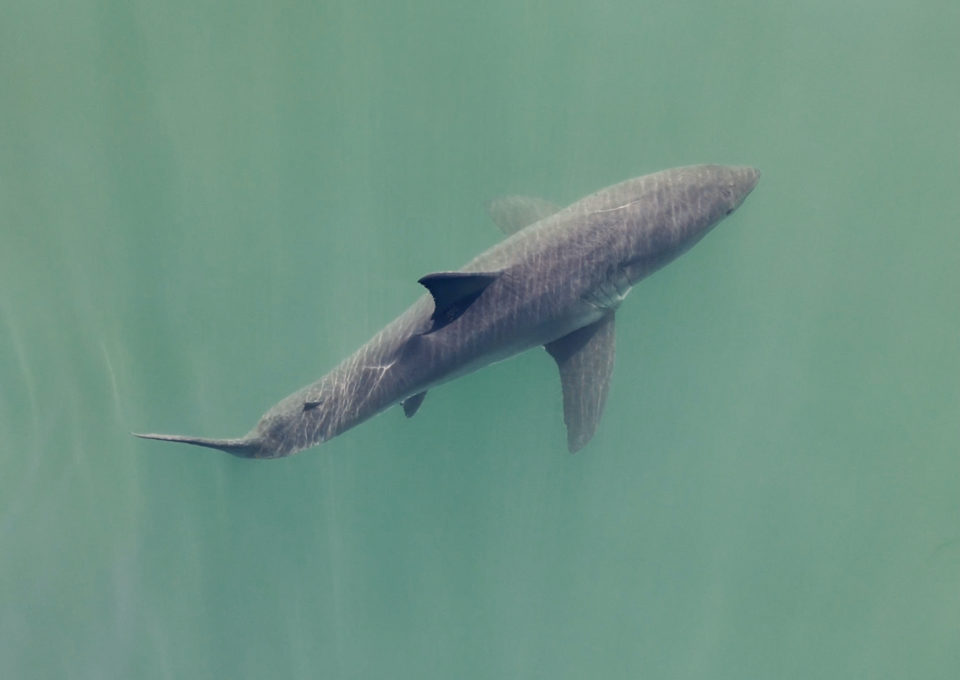 OM: Are there other conservation concerns where you live?

SF: Yes, word has gotten out that Southern California has become an even larger nursery ground for great white sharks. It’s a place to come to see them and that is attracting too many boats which end up chasing these precious animals.

OM: Why, in your opinion, is it important to show these encounters between humans and sharks?

SF: Most people only think of big bloody mouths and huge teeth when thinking of sharks. That’s all they’ve ever seen on TV and in the movies. But the sharks I film don’t swim around eating 24/7 and certainly do not hunt people. I have literally filmed hundreds of hours of footage and watched an incalculable number of encounters with great white sharks swimming right next to swimmers, surfers, stand up paddlers, and so on. This is the truth, the norm, the day-to-day reality of what happens in the ocean. Yes, bites tragically do happen but they are incredibly rare considering the hundreds of thousands of interactions around the world and the millions of possibilities if sharks really wanted to hunt humans.

OM: Did you ever witness any potentially dangerous situations with your drone?

SF: The potential is always there. Sharks are massive animals with great hunting skills but 99.99% of the time they just leave us alone while we swim and surf. I can typically find a great white shark within one to two minutes. They are out there. All day, every day. It’s where the live. It’s their world. We need to respect them and the places where they live. But going back to your question, yes, I did helplessly watch a great white shark ‘hunt’ a swimmer once. It went deep, sneaked up from behind the swimmeer and quickly increased its speed as it approached. But at the last minute, when it realised that we are not something it wants, it broke off and went on its way. The swimmer never had a clue it was there.

I can typically find a great white shark within one to two minutes. They are out there.

OM: What are your future plans? What would you love to do and achieve?

SF: My Instagram channel is all I currently have. Maybe I will add a YouTube channel in the near future so that I can create and post longer videos. I currently try and post a little ‘did you know’ section with my posts that includes informative facts about sharks. I love learning more about them and what I’ve discovered is that people love this section as much as the videos themselves. My favourite message is when someone writes me saying they’ve spent their life afraid of sharks but have grown to respect them because of my posts.

Watch some of Scott’s stunning footage on his Instagram channel.