Easter Island has one of the highest concentrations of microplastics in the world.

In 2009, South African athlete Sarah Ferguson retired from her career as a pool swimmer racing in international competitions. A decade later, and she has just completed a gruelling 63.5km swim around Easter Island, or Rapa Nui, to raise awareness about single-use plastic pollution.

Despite being a UNESCO World Heritage Site and famed for its Moai statues, Easter Island is also home to one of the highest concentrations of microplastics in the world, due to the South Pacific Gyre. Over the past 20 years, there has also been a 500% increase in visitors to the island, which has brought additional plastic pollution problems.

Since plunging into the world of endurance swimming in 2011, Ferguson’s achievements have mounted up. She was the first woman to swim 17.9km from Umhlanga to Durban (2014), took part in the MAD swimmers 24hr swim (45km, 2016), was the first person to swim the 18km Aliwal Shoal solo swim and was the first African woman to swim the 58km Ka’iwi Channel crossing (2017). Last July, she swam a total of 100km in six days during the Elephant Coast Swim Series.

It took Ferguson just over 19 hours to circumnavigate Easter Island in her Swim Against Plastic campaign on the March 15. Organised by her own NPO Breathe in collaboration with Plastic Oceans, the swim was a human first, record-setting achievement. Here she shares her thoughts on plastics, the ocean and of course, swimming.

Oceanographic Magazine (OM): How challenging was the circumnavigation of Easter Island?

Sarah Ferguson (SF): It was really tough. The thing that made it super hard was the salt water – it was much saltier than I thought it would be, that took me by surprise. I had prepared for it to be relatively salty, but I was convinced that it couldn’t possibly be saltier than what I’d experienced before, so that really threw me. It was a big distraction that was hard to ignore because my mouth was in the water all the time. Within the first hour I wanted to get out already, it was just so uncomfortable, but quitting was never an option. I knew I just had to try and push through. I was pretty seasick too at the beginning – just ten minutes after my departure the harbour was closed due to the increasing swells.

SF: I try and pick areas that are going to highlight the issue of plastic pollution. When I was researching after my swim in Hawaii, which was two years ago, I googled: ‘where is the most plastic in the world?’ Easter Island came up as having one of the highest concentrations of microplastics in the world.

OM: Did you see much plastic during the swim?

SF: The water was incredibly blue and clear. I saw bits and pieces of things floating around but I wasn’t sure if it was microplastic or bits of seaweed. After the swim I discovered that it was plastic, but it wasn’t in your face. It depends on tides and currents as to when it all comes in, but afterwards we went to a little pebble beach. From afar it looked incredible and clean, but as we started to pick the pebbles up, the plastic that we uncovered was devastating. Knowing that that plastic’s been there for years but it doesn’t come from the island itself, it comes from all over the world, that really hits home that it’s such a global issue.

From afar it looked incredible and clean, but as we started to pick the pebbles up, the plastic that we uncovered was devastating. 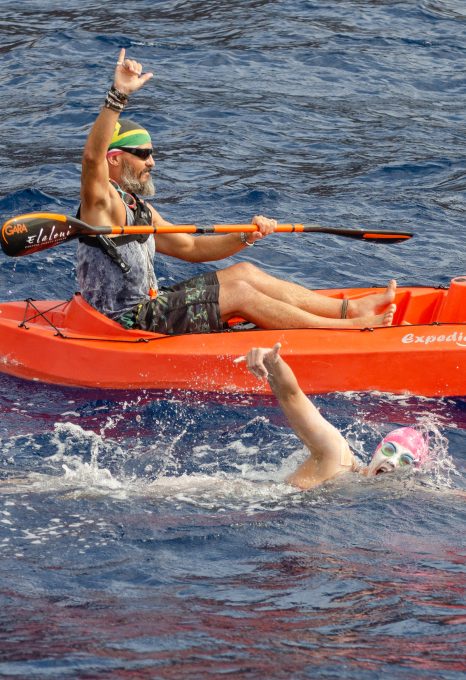 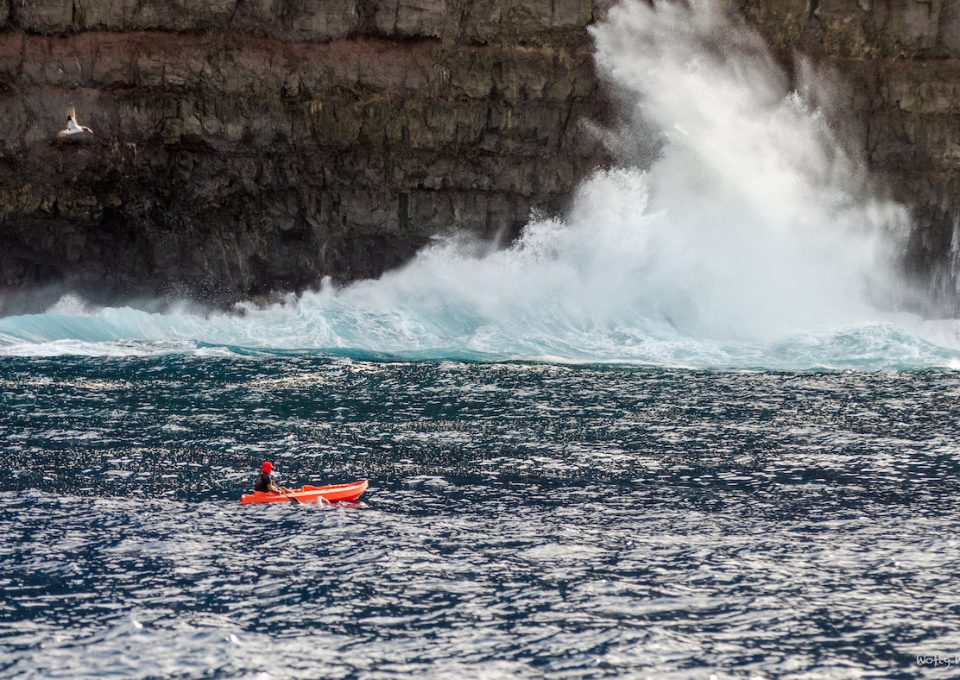 OM: Can you tell us a little about your work with Breathe?

SF: Breathe is my own NPO. Our goal is to eliminate throw-away plastic pollution and inspire change, predominantly through education. Doing these swims gives me a platform to speak out to a wider audience. We’re fairly new, so we’re putting some structures in place so that it can grow and develop, and we can try and increase our reach. A lot of what we do as well is collaborate with other organisations like Plastic Oceans, who sponsored the swim.

OM: How did you get from competitive swimming to activism?

SF: I retired from competitive pool swimming in 2009. I knew that my career as an athlete wasn’t over, I just didn’t really know what it was going to look like. I actually went to India to do some work and teach as a physiotherapist and I think it was in India where the seed was sewn. I saw how polluted and dirty parts of India were, and I really wanted to prevent that happening anywhere else in the world.

From there I ended up in Hawaii and I was invited to do an ocean swim while I was there. That’s when I fell in love with the ocean. Swimming with dolphins and turtles in the cleanest water and seeing an island in the distance, wondering if I could swim to it – it sparked something in me. Then coming back to South Africa, I actually had a period when I went into depression, just not knowing what to do with my new found freedom of not having a goal in competitive sports. Even though I had a career and a pretty balanced life it was really hard for me to not have a clear direction in terms of competing and being a competitive athlete.

I guess it all happened by accident through a process of travel and experience. And just trying to figure out what I was passionate enough about to continue doing these crazy swims. It’s kind of evolved through my whole life, I’ve always cared deeply about the environment and hated litter, and as I look back on how things have evolved it is quite amazing seeing how it all fits together.

OM: Would you say you’re drawn to challenges?

SF: I am competitive, but probably more with myself than anyone else – although if you put someone next to me in the water then I’ll definitely race them! I love pushing myself and having something to train for, it keeps me focused on something and it keeps me sane. I am driven to push myself to a certain limit and see how far that can go and what I can do. Because I actually love it and the more that I get out there the more I realise how much I love it. Therefore, it’s easy for me because I love it so much, it’s like a sense of freedom and it’s where I feel most alive. 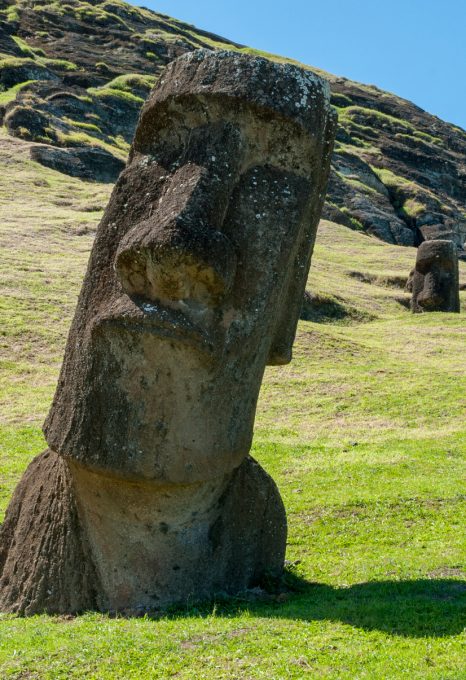 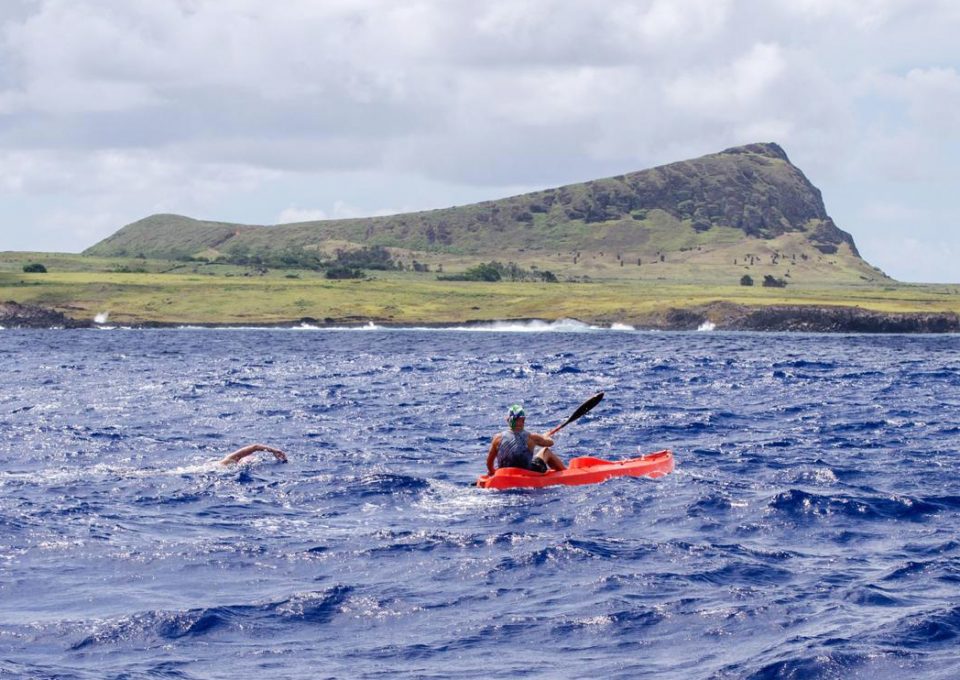 I didn’t just get up one day and swim around Easter Island – I did it one stroke at a time.

OM: Did you swim in the ocean much as a child?

SF: I did swim in the ocean as a kid – I grew up in Johannesburg but moved to Cape Town when I was six, so I was exposed to the ocean and I always loved the water. I remember when I was very little we came to the coast and my mum had to pull me away from the water – before I could walk, I was crawling to the sea. I’d just never really been exposed to swimming in it or competing in it. I was so focussed on pool swimming, that was my go-to, that was what I focussed on. When I was competing as a pool swimmer, the thought of anything longer than 200 metres was horrendous to me, but I definitely think that that prepared me for what I’m doing now – I wouldn’t change a thing.

OM: Now that you’ve found ocean swimming, what does the ocean mean to you?

SF: The ocean means everything. We get most of our oxygen from the ocean so we cannot be without it. For me personally, the ocean means a lot of things. It’s a beautiful thing, it’s somewhere that I can find peace and calm and freedom. It’s also a place that I have huge respect for because it’s very powerful. There are creatures in the ocean that are much bigger than we are as well so I think it’s a balance of respect and admiration. The desire to protect it grows stronger with every swim I do.

OM: How do you try to live plastic-free?

SF: I’m not perfect by any means. But I try – I go to three or four different shops when I get groceries just to try and avoid plastic packaging. I do go out of my way where I can. I try and practise what I preach, that’s very important to me, but I’ve got a long way to go. It’s a process so it’s just about taking it one step at a time. We can’t expect people to change overnight but it’s about having a level of awareness, consciously making decisions not to buy single-use plastics. It’s a process.

OM: What would be your advice to others?

SF: I didn’t just get up one day and swim around Easter Island – I did it one stroke at a time. If I’d had to think about the fact that I had to swim 63km in one go it would have been overwhelming, so I didn’t. I just thought of it as: “I’m just going to be in the water doing what I love, and if I do it one stroke at a time I’ll get to where I need to go.”

It’s the same thing with the issue of plastic pollution. No one is going to be able to change overnight, especially those living in cities, but every time you do the simple things like refuse a straw or take your own coffee cup, accumulatively that makes a huge difference.

I didn’t just get up one day and swim around Easter Island – I did it one stroke at a time.