We were all barefoot and salty.

It’s a comforting combination that is usually only available when near the ocean. The wind was relentless but after a few days at sea on board the S.V. TravelEdge with eXXpedition, the sun crept out from behind the ribbons of cloud that formed over the Azores. I squinted, brushed at the salt crystals that had formed on my jacket and boots and felt warmth on my face for the first time since leaving land. I closed my eyes to embrace the sense of calm that had eluded us for so long.

I’ve found sailing to be one of the best ways to experience nature, and it is a pursuit that I have devoted my life to. The ever-changing nature of the ocean environment has provided me with constant entertainment. Chartering the shallows was never enough and my horizons exploded when I first left the shore to explore the open ocean. Here was when the seed was planted. The ocean tested me and pushed me out of my comfort zone. There have been many nights at sea when I’ve questioned my decisions while trying to get some rest. But it was here that I learnt to respect the ocean. The intensity of the love/hate relationship I have formed has influenced almost all of my decisions to date. My perspective changed as I witnessed first-hand the damage our ocean suffers. My playground had become diseased – plastic has spread on a global scale causing suffering for millions of people and animals around the world.

While working as a commercial photographer and feeling homesick from the sea, an opportunity arose to join eXXpedition, an all-female sailing voyage led by Emily Penn, which studies plastic pollution in our ocean. I knew I had to be involved. A sense of reason and purpose filled the void that had grown within me and, desperate to follow a path with intention, I confirmed my position onboard and began packing for my voyage, which would carry me 5,000 nautical miles from Plymouth to Panama.

Dr. Winnie Courtene-Jones is the science lead of eXXpedition and has created a programme that uses standard methods of data collection and study to provide a global assessment of the distribution and accumulation of microplastics in our ocean. The ongoing global study will highlight hot spots, causes and potential solutions to the ocean plastic pollution crisis. In order to validate the presence of microplastic and its concentration in the marine environment, it is important to sample various sediment, subsurface and surface layers.

I closed my eyes to embrace the sense of calm that had eluded us for so long. 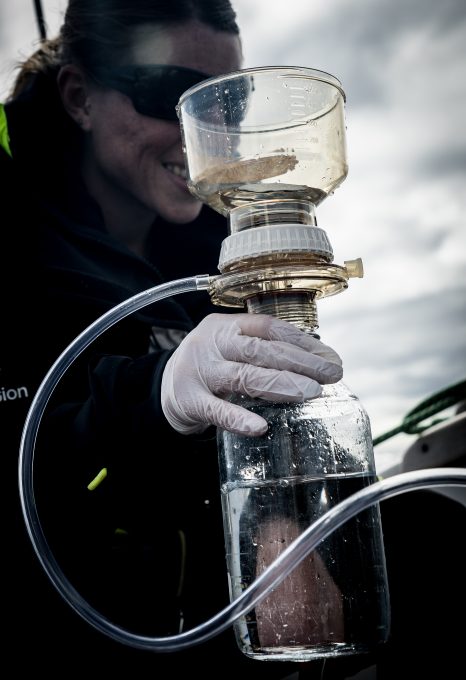 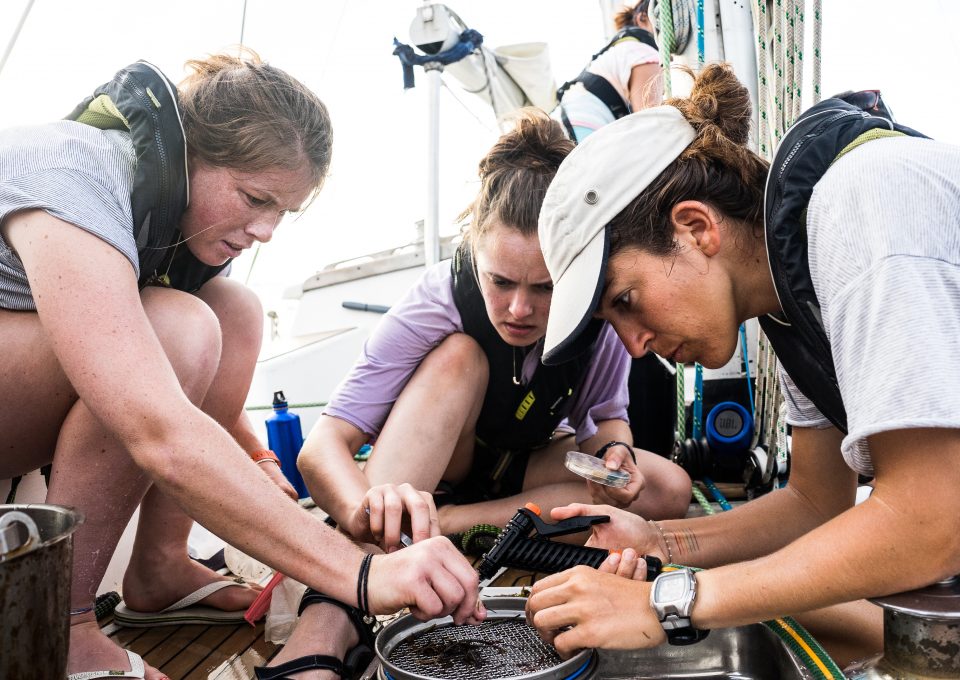 Gathering samples in the open ocean while living on a sailboat with only primitive comforts and often unforgiving seas had its challenges, but just like anyone else my mornings started with coffee and breakfast. Then, to work. I spent a lot of time in front of a screen, looking at the weather and navigation, as we had key locations to hit and it was vital that we crossed through the North Atlantic Gyre. Ocean gyres are known for accumulating plastics and other debris. The North Atlantic Gyre wasn’t an identifiable mountain of rubbish, as some media outlets have implied. Initially, it looked just like the rest of the ocean, but our findings proved otherwise.

We collected samples both from the surface and the water column daily. The surface samples were collected using a manta trawl, named for its aluminium wings and fine mesh tail that floats on the surface of the water. The contents of the net was filtered through sieves before the plastic fragments were counted and painstakingly categorised by size. The largest sample recorded was off the San Blas Islands, just north of Panama. Nearly 500 pieces of plastic were found in one single trawl, which equates to approximately half a million pieces of plastic per square kilometre, and that’s just on the surface. The majority of the pieces were fragments, indicating that the microplastics have arisen from the fragmentation of larger plastic items in the environment. The majority of plastics that have been analysed are polyethylene, this is used in a huge variety of products such as food packaging, bags and film. However, some samples from the Caribbean contained plastic pellets known as nurdles, which are produced by the plastic industry, shipped around the world before they are then melted down to produce brand new plastic products. Spills during transportation can cause these to end up in the ocean.

Within our samples we also inadvertently collected natural debris, such as zooplankton. They range from microscopic organisms to large species such as jellyfish. Without them, numerous species would starve to death as many rely on zooplankton, directly or indirectly, for their food. Samples in the North Atlantic Gyre unfortunately confirmed what we suspected – plastic outweighed zooplankton by three to one.

it looked just like the rest of the ocean, but our findings proved otherwise.

On one particularly memorable day, a minke whale graced us with his presence for more than an hour, cruising through the waves that peeled away from the hull of the boat. His slow meandering below the surface was mesmerising and the entire crew was transfixed. Minke whales are in the baleen family and are small in comparison to most other whales. They don’t actually have any teeth, instead they have baleen (long, flat keratin plates that hang from the whale’s mouth). They engulf water and then filter it out again through these plates, capturing shrimp and other prey in the process. It was at this moment, watching him glide through the waters below, when we realised that this magnificent mammal was almost certainly ingesting plastic, as only a few miles away on that same day, we had gathered samples loaded with tiny fragments. I felt helpless and feared for the future of this whale. We all knew how important it was to continually speak up for those underwater and out of sight species that are so underrepresented when it comes to public awareness and protection.

Currently the subsurface is lacking scientific data on microplastics, which is why we also took samples in the water column using a Niskin bottle. The bottle is lowered over the side of the boat to a depth of 25 metres, at which point it then snaps shuts to contain the water sample. The bottle is then brought back on board where the water is filtered through a conical flask and vacuum pump onto filter paper, which is then stored in a petri dish and sent back to the lab at the University of Plymouth for analysis. Tiny fibres and fragments have been found in these samples, providing evidence that plastic does not just remain on the surface, but slowly sinks down to the seafloor. During this journey downward it is likely that marine animals will come into contact with the plastic and potentially become contaminated. Where are these plastics coming from and what was their original purpose? A Plymouth University research team is currently trying to answer these questions. If we can find out the original producers of the plastic, we can hold them accountable and work towards reducing the chance of this product polluting the ocean in the future.

An integral part of our travels to different countries is to connect with local authorities so we can find out the main issues within waste management and work together on finding solutions for these issues. We found that there is not one single solution for everyone and that each community needs a tailored method to improve waste management and reduce pollution. As we cruised closer to Aruba, a synthetic stench of decay filled the air. We quickly realised that the culprit was the landfill Parkietenbos, which has placed the adjacent mangroves and indigenous parrot species at severe risk. Rubbish shaped the landscape and plumes of toxic smoke fogged the sky. Having reached its full capacity many years ago, the landfill is now expanding towards the sea, causing waste and plastic to overflow along the coastline and beyond.

Rubbish shaped the landscape and plumes of toxic smoke fogged the sky. 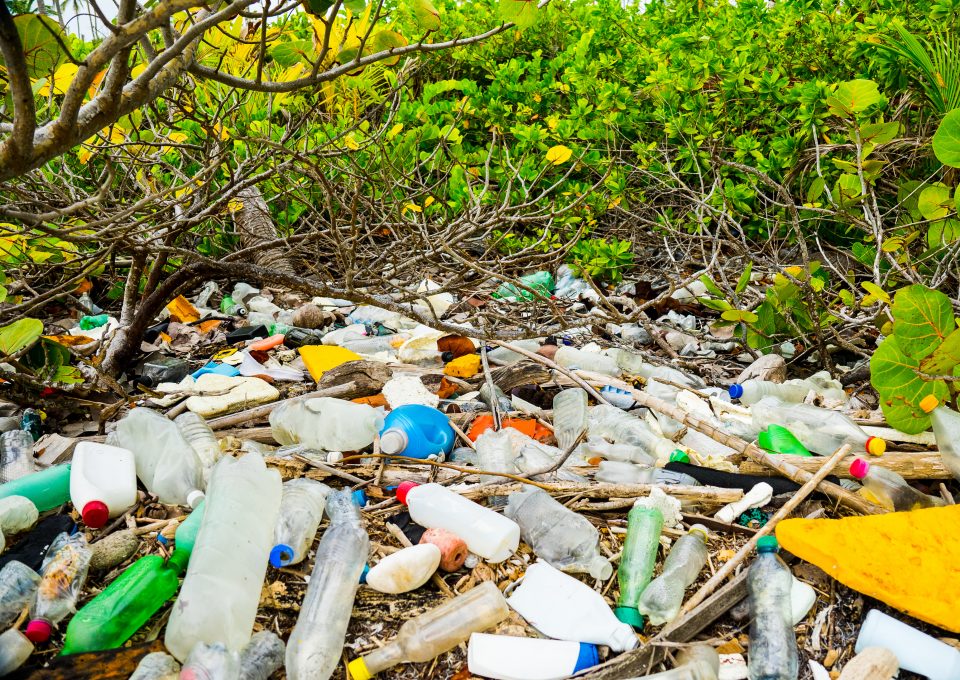 We have the capability to live in harmony with nature.

Aruba is working towards reducing waste. eXXpediton crew member and ambassador Juliet Carvalhal fought for a plastic bag ban on the island as co-founder of Impact Blue Foundation, which was successfully implemented in January 2017. Since then, 82.8 million plastic bags have been prevented from entering the ocean and marine environment. Most recently, her efforts have pushed the government to implement a new law banning all single-use plastics, bioplastics and oxo-degradable plastics. The scientific data collection methods practised on board have allowed her to use this research, develop from it and submit it as evidence to support her cases. If this isn’t proof that one person can make a difference, I don’t know what will.

The Bonaire government, alongside various independent organisations, have already protected specific areas of interest. However, that’s not to say they don’t have their fair share of plastic waste problems. Bonaire is lacking in legislation when it comes to plastic waste, as well as both infrastructure and resources. After partaking in an underwater beach clean-up, followed by a meeting with the local dive centre, it was clear that plastic waste was harming both the environment and the tourism economy that Bonaire relies upon. It was fascinating to see how the neighbouring Caribbean islands of Bonaire and Aruba were at such different stages of their environmental development. Although improvements are needed on both islands (and they are far from alone in this – every country around the world has work to do), what was clear was that there are numerous passionate residents who have dedicated themselves to conservation efforts in both of these unique places.

Each crew member had their own reason for joining the expedition, their own personal experiences that drove them to be part of a movement to help protect the ocean. The aim of eXXpedition is to create an ever-expanding team of ambassadors who will go on to be a driving force in revolutionising how we live and protect the environment that sustains human life. We are expecting the first official results of the eXXpedition data analysis to be published later this year, with plans to circulate our findings far and wide allowing groups and individuals to join our army and push for positive change.

As the most dominant species on Earth, humans alone have the power and responsibility to stop the exploitation and destruction of our natural resources. We have the capability to live in harmony with nature, but if we fail, the planet will eventually reject us. Nearly everything we do has an impact on the planet. I learnt a lot during my time with eXXpedition, but perhaps most of all, I understood the urgent need to not judge ourselves or others too harshly, to celebrate positive efforts and successful change, no matter how big or small. Together, we can do so much.

Find out more about the eXXpedition voyage in Issue 03 of Oceanographic, which features Emily Penn’s piece, ‘Changing Winds: Ocean optimism in the North Pacific Gyre.

We have the capability to live in harmony with nature.