Of all the extraordinary creatures that reside in the ocean, seadragons are some of the most mythical. But, like so many marine animals, they're at risk from heating waters and habitat loss. But what can be done to protect them?

There is an extraordinary creature that lives, camouflaged by nature, in the southern waters of Australia. It truly is an evolutionary chameleon of the ocean. I was exposed to the ocean at an early age and learnt to appreciate it as an intrinsic part of Australian life. But it wasn’t until I became a diver that I started to pay attention to the wonders that lie beneath the waves.

While the sheer variety of creatures that reside in the marine environment is somewhat incomprehensible, there is one delicate and little known species that has become my obsession. Weedy Seadragons (Phyllopteryx taeniolatus) have fascinated me ever since I first heard of their existence – I couldn’t believe these intricate creatures existed in my own backyard. Part of the sea horse family, Syngnathidae, they are only found along the southern coasts of Australia generally in the cooler temperate waters. The first time I finally saw one while out diving, I followed it for as long as possible, almost neglecting my air consumption. I hadn’t realised just how big it would be, how detailed it’s patterns. I held my breath to listen to the snap of their proboscis as they feed on the tiny mycid shrimp.

My fascination developed into a bit of an obsession. I have now seen weedy seadragons in all parts of the southernmost regions off Australia and even the tiniest differences in each individual fascinate me. The variations in their colours, their habitat and terrain, their physical size, their courting rituals – the list goes on. However, we are still unsure if these are variations are in sub species or simply examples of the same species adapting to their environment. I am driven to find out as much as I can about these bizarre creatures and how I can play a part in protecting them.

As syngnathids they are protected by some measures, but this doesn’t necessarily translate into tangible results. Protection generally relates to fishing and removal from their environment, but these are not the only threats to Australia’s seadragons. Species-level protection does help certain animals, but with declining habitat and poor genetic diversity weedy seadragons may suffer from bigger issues.

Weedy seadragons play an important role in maintaining the biodiversity of temperate reefs, as they feed on mysid shrimp and provide food for other species. The seadragon’s habitat can vary from seagrass to kelp forests and, in the east coast of Australia, we see the weedy populations mostly favouring the kelp and seaweed habitat, while further south in Victoria they will swim predominantly around sea grass beds and near jetties. One notable observation is that we are seeing incremental changes in the way these seadragons look in different locations, which raises the question – are they a sub species? Could they have genetic differences based on their location? Further research is being done to determine if these differences are enough to classify them as a separate sub species.

As with a lot of our marine life, they are under threat from habitat loss, the impact of climate change heating our oceans and increased pollutants from human excess. We have observed thinning of kelp in Sydney, which is an important source of shelter for weeds. This loss impacts seadragons heavily, as their environment acts as a means of survival through camouflage. Their ability to blend into seaweed, kelp forests and sea grass beds and move with the surging ocean is why they have been successful as a species. But in many parts of Australia, the kelp forests are dying, and the sea grass is diminishing which will have an immense impact on how these creatures will survive, or if they can adapt in any way at all.

“They are a truly magical animal to watch in the wild thanks to their almost invisible fluttering fins and genuinely dragon-like appearance,” said John Turnbull, a marine ecologist and President of the Underwater Research Group of NSW. He runs a community-based organisation that is dedicated to sharing information about the underwater world and ultimately helping to contribute conservation efforts through citizen science. One of the key areas of focus is the weedy seadragon monitoring project, which supports The University of Technology, Sydney, Underwater Research Group and Sydney Institute of Marine Science (SIMS). “They need habitat, which is diminishing, and so may become increasingly open to predation. They are also found in temperate waters only so may be impacted by warming oceans. We are seeing declines in numbers in some populations, which will impair their resilience due to diminishing genetic diversity.”

Their physiology is fascinating. They have a long snout that they use to catch their prey and have a close vision of focus that extends a little beyond this. It could be the reason they hunt their prey in such close proximity. They continually feed on mysids, small shrimp like crustaceans and from  juvenile age to being fully-grown they increase by 10 times their weight. Researchers have tagged weedy seadragons and have determined that their life span is approximately 6-7 years, which is longer than most seahorses of the Syngnathidae family.

The males carry a brood of eggs along the underside of their tail until they are ready to hatch which can be between 8-12 weeks. The brood of eggs are brightly coloured, possibly to deter predators as often bright colouring can serve as a warning to other marine animals that they are in some way poisonous.  However generally their colours and features are designed to blend in with their environment and provide a natural camouflage. The hatchlings are then on their own to blend in and survive from any predators until they are fully grown. Weedy seadragons tend to have fewer offspring than many other fish species, but this may be a strategy to produce strong and healthy babies that have better chances to survive. They do have some predators including moray eels and octopus, however they seem to be a resilient creature despite their lack of defences. 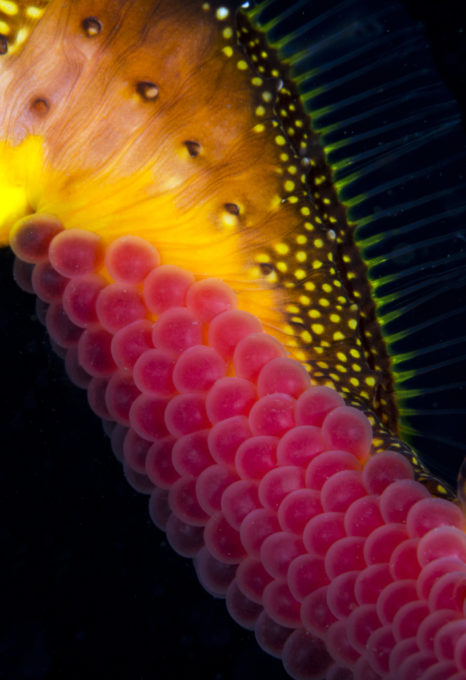 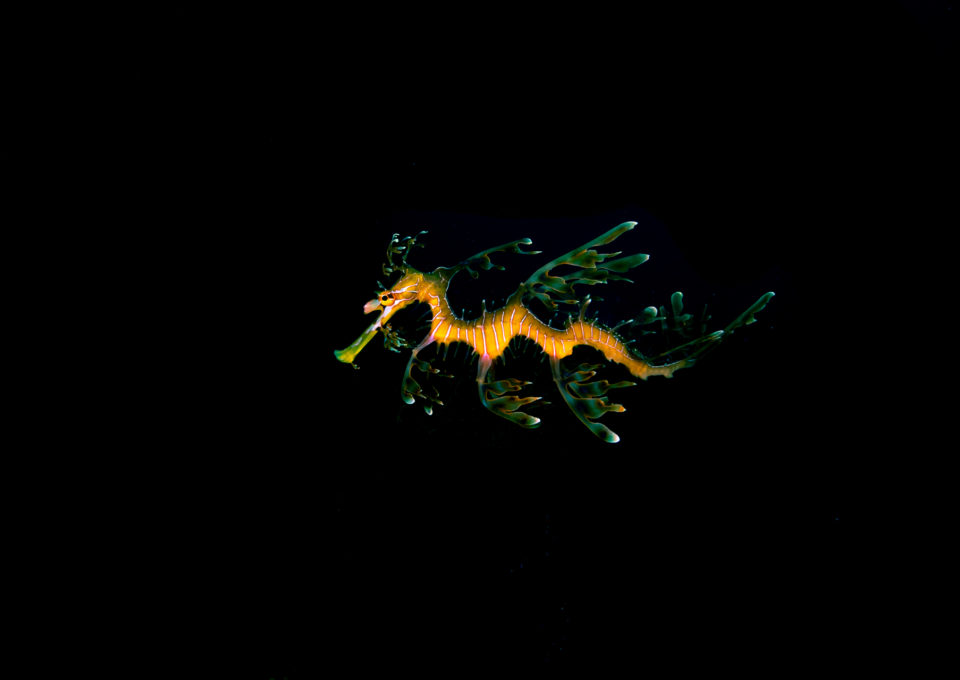