The Welsh seas hold many surprises, including critically endangered angelsharks. Filmmaker and scuba diver Jake Davies shares the special moment he was able to take the first footage of one of these rare angelsharks off the UK.

Over the years of diving there was one species which was at my personal top of the list to encounter and film: the angelshark. The species is listed as critically endangered on the IUCN Red List. Angelsharks are known to be present off the Welsh coast, where the multidisciplinary project Angel Shark Project: Wales has been working with fishers and coastal communities since 2018 to better understand and safeguard the species off the coast.

While records of angelsharks being accidentally caught by fishing vessels have been shared every year, no underwater footage of the species off the UK coast has ever been recorded. I tried to change that. However, trying to find a well-camouflaged species whilst diving off the coast can be considered a near impossible task, something I had to learn the hard way when previously looking for more common elasmobranch species such as spotted rays or thornback rays. They often completely bury themselves in the sand with only their eyes peeking out. That’s why searching for a critically endangered species that’s perfectly camouflaged and that little is known about seemed like a major challenge. I personally thought it was impossible.

No underwater footage of the species off the UK coast has ever been recorded. 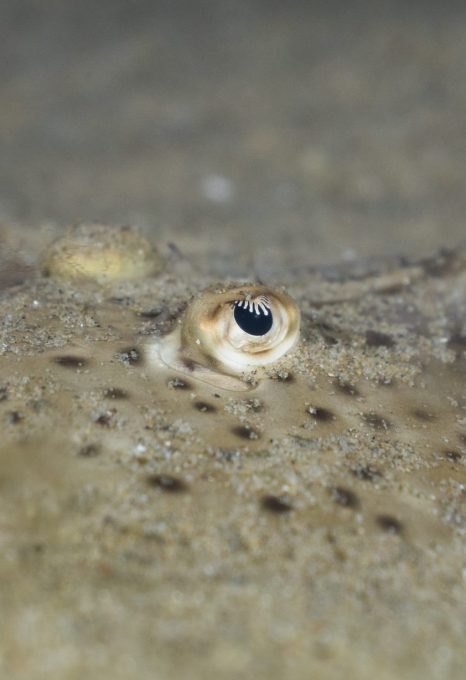 A spotted ray under the sand. 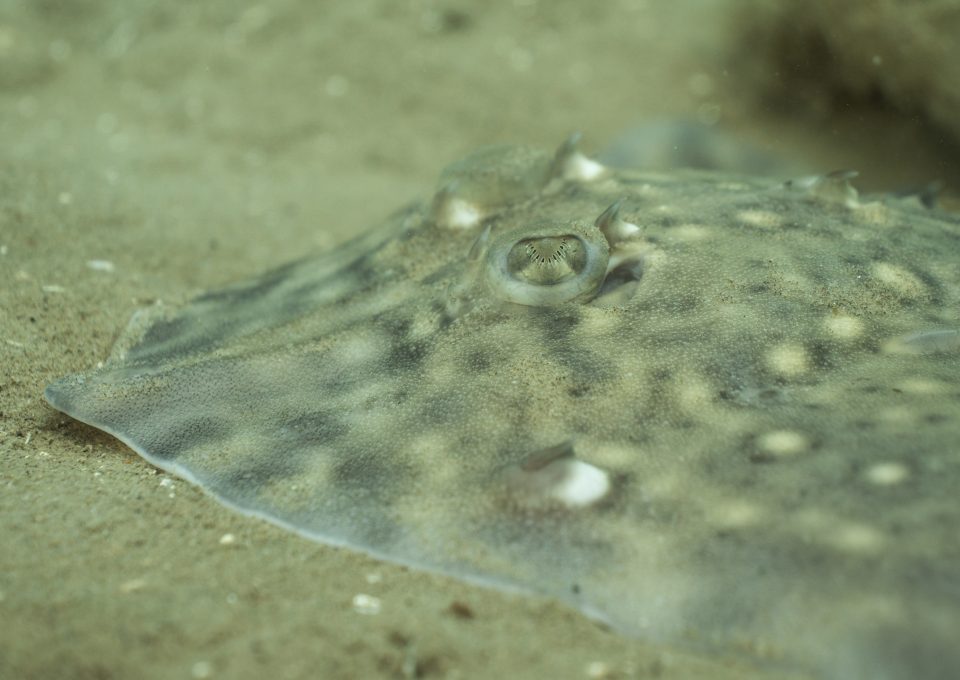 On a bank holiday Monday in August of 2021 this changed. It became a day that I’ll never forget. I was planning to dive with a local dive club that day and I I debated whether to go for a dive or to complete some work that needed to be done. Luckily, I ended up deciding that I should get out and in the water. Arriving at the dive location, a site we regularly dived at, we decided that it would be good to try a slightly different area than usual.

After carrying out all the gear checks and making sure the camera setup was working, we jumped into the water, first swimming over a small patch of pebbles before heading out onto some clean golden sand. Keeping an eye out for the many species that are found in the area, I was seeing numerous flatfish that buried deep into the sand as I passed. There was one species in particular that I was hoping to find – the thornback ray. They are occasionally seen in the area and even though they are considered fairly common in the area, they are rarely seen by divers. I swam slowly across the sand, waiting to see some eyes popping out from the sand but there didn’t seem to be anything to see here.

The ground at the site then transitioned quickly into a varied underground of gravel and small pebbles. It was here that I suddenly spotted a tail outline that caught my eye. Initially, it looked like the tail of an adult thornback ray but a sudden thought brought back an image that I had only seen whilst out in the Canary Islands. I didn’t think it was possible but swimming closer to the outline made me realise what I was looking at: one of the elusive angelsharks I’ve been looking for for so long! The distinct outline of a ‘sand angel’ in the sand with a pair of small eyes looking up and two dorsal fins reaching out the sand gave it away.

As soon as it sunk in, my breathing rate doubled so that the consumption graph on the computer shot up alarmingly quickly. After the initial shock and excitement, I called my buddy back. It was time to regain focus and get the shots that I had dreamed of getting for so long. I positioned my camera to reveal how well the species remains hidden within the sand. I tried to capture as many clips as possible as I thought to myself that this could very well be the only time that I would be able to spend time with the species off the Welsh coast.

I didn’t think it was possible but swimming closer to the outline made me realise what I was looking at.

What made this special encounter even more special was the realisation that the individual was a juvenile. It was only around 30cm long. The sighting therefore was able to be seen as further evidence of a breeding angelshark population off the Welsh coast – an important indicator for Angel Shark Project: Wales to further understand the species. As time is limited underwater, it was time to head back after what felt like a short moment with the shark.

After getting back home with plenty of time in the day, I couldn’t stop thinking of possibly heading back in the water. We decided it might be worth heading back during sunset to have a look and see whether we could find the individual again as they tend to be more active during the darker hours. Knowing it would be pretty unlikely, we still thought it would be worth it. A couple of hours later we got back in the water. After a short swim over the sand, we not only passed a thornback ray and a spotted ray – the species I was looking for earlier – we saw the outline of an angelshark. I couldn’t believe it. For the second time in one day, I had found it.

With the species being more active at night, it swam off but quickly re-buried itself. This behaviour helped build up a film sequence that shows why they are so well-adapted as ambush predators. Once settled, the individual even gifted me with a golden shot: its famous lightning fast strike it uses to capture its prey; in this case a small goby. To see angelsharks hunting is incredible and I felt incredibly lucky that my camera was still running.

This behaviour helped build up a film sequence that shows why they are so well-adapted as ambush predators.

Over 25 elasmobranch species can be found along the Welsh coast.

Many people think that Wales is primarily cold, dark and has very little life underwater. Below the surface of the Welsh coast, however, there’s a diverse range of marine life and habitats to be found; from colourful macro subjects like nudibranchs (sea slugs) to oceanic wanderers such as leatherback turtles, it is home to myriad wonderful species. There’s one family that fascinates me most and that is a surprise to many: the elasmobranchs, the sharks, skates and rays of Wales.

Over 25 elasmobranch species can be found along the Welsh coast, from the second largest fish in the sea, the basking shark to the perfectly adapted ambush predator that is the angelshark as well as the fastest shark in the ocean, the shortfin mako shark. They are found hidden below the sand in shallow waters, hunting amongst the reefs as well as cruising out in the open ocean.

Whilst diving and exploring the many diverse underwater habitats along the Welsh coast I’ve been fortunate to encounter many of these elasmobranch species which have provided unforgettable moments. During these encounters I’ve captured incredibly rare moments of a pair of lesser spotted catsharks mating and have taken footage of lesser spotted catsharks developing at different stages within egg cases attached to kelp. Spending time with each species is a real honour and every species can provide a range of unique and different interactions.

A day which I started off by debating whether to go for a dive, ended up being incredibly remarkable. I saw a remarkable species on two dives; absolutely unforgettable moments that I didn’t think were possible off the Welsh coast. This experience just goes to show that you never know what surprises and adventure can occur below the waves. Even though a site might have been dived numerous times, doesn’t mean it can’t reveal something new.

Watch the first footage of an angelshark caught on camera off the Welsh coast here:

Over 25 elasmobranch species can be found along the Welsh coast.