“That was it for us. We needed to showcase a few of these animals that are actually here right now.”

Throughout periods of great change, many of us find it comforting to return to the stories we know well. They provide safety, stability and a sense of security – even if just for a few pages. While reading a new column by marine social scientist and Finisterre ambassador Dr Easkey Britton in Issue 13 (coming soon) I was grateful to be reminded of the sanctity of storytelling.

She writes: “Stories help us make sense of the world, our places within it, and can spark curiosity and wonder that can form new connections, new ideas and new ways of thinking about the ocean and our relationship with it.”

Stories can, and should, be told in as many ways as is possible. Tales of bold ocean farers, naturalists, biologists, explorers and scientists from our history should be retold, not only to inform new generations of past triumphs, but to inspire them to carry the torch forward.

It’s likely that if you’ve found yourself here with Oceanographic, then you’ve already heard of Finisterre. Founded by Tom Kay in 2003, it has spent nearly 20 years tracking down and utilising the most sustainable methods and materials to create their pieces. In 2018, it became a B Corps certified company. They offer a repairs service. They work out of a building in St Agnes that overlooks the sea and the team go surfing and cliff walking together.

“I spent sixteen years in the city, always yearning to be by the coast,” the Finisterre lead menswear designer, Andrew Todd, told me. “They first time the team took me surfing, I was just staring down at the water and then out to sea. To be able to look into the distance, to look out at miles of unknown. It’s something incredible. I think that’s how my Finisterre career has been so far.”

The stories the team choose to tell through their collections are authentic and absorbing. From collaborations with the RNLI to ground-breaking research into creating the Seasuit, the team at Finisterre preserve their material for deeper messages.

“We do a lot of collaborations, but it’s not about hype or fashion or trying to churn out a product,” said Todd. “Originally, the collaborations were about trying to maybe turn our hand to a product that wasn’t so easy to create. But it’s also about who we can introduce our customers to – like-minded businesses and groups that stand for something.”

Stories can, and should, be told in as many ways as is possible. 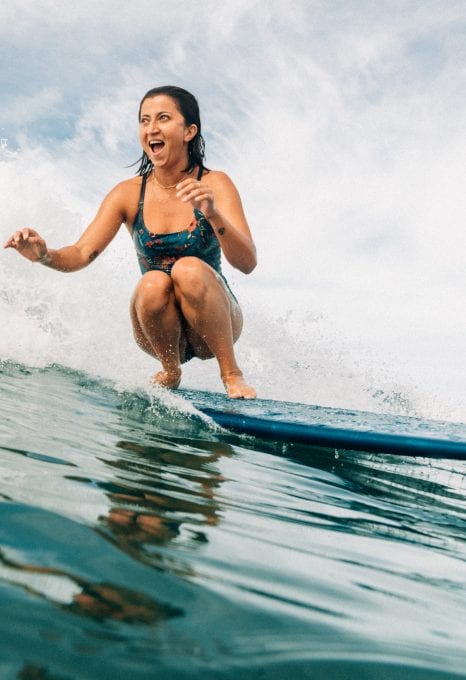 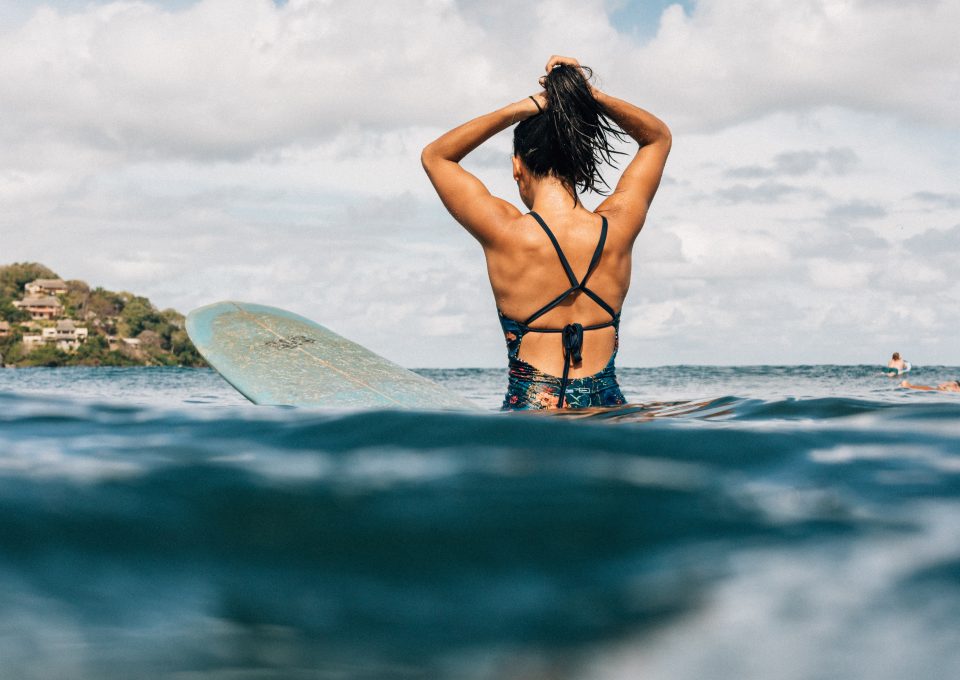 In a recent collection, Finisterre got the call to collaborate with a world-renowned British institution – the Natural History Museum (NHM). “This was something different,” said Todd. “It was about the environment and the ocean, spreading awareness and taking care of the planet.”

The NHM doors first opened in 1881, with Charles Darwin as one of its first visitors. Within its striped walls, skeletons and relics from the past never fail to intrigue with their stories. “Originally, a lot of the exhibitions seemed to be about extinction, showing you creatures that had previously existed,” said Todd. “We see these creatures that don’t exist anymore, and that can be quite overwhelming. It’s almost like they’re not real, because you’ve never experienced the real thing. I started asking myself, ‘what are tomorrow’s dinosaurs?’ There are numerous species that are on the edge of extinction. And if we don’t act or do something now, they will be tomorrow’s dinosaurs. They will just be hanging up in this museum, on this rolling platform of the same people having never witnessed them in reality. That was it for us. We needed to showcase a few of these animals that are actually here right now.”

In our modern and fast-moving world, we’re encouraged to always be looking for the next new thing. Whether it’s a never-seen-before exhibition in a museum or a new trend on the high street, the conveyor belt of new information never ceases. In some cases, this is no bad thing – we are continuing to discover new evidence about the world that is vital to our continued existence, adding to pre-existing literature. But fast fashion relies on our forgetting the old stories to replace them with the new.

“Fast fashion needs trends, because that’s how they convince you that last season’s thoughts are over and now it’s time to get onto this,” explains Todd. “It’s about business and selling you more product. But long-lasting products have almost been deconstructed and simplified to the point where you can’t get too caught up on the fashion details. For us, it’s definitely about a piece that is built to have longevity, and that’s in everything – it’s the fabric, it’s the construction and the components but it’s also the aesthetic of it too.”

“It was about the environment and the ocean, spreading awareness and taking care of the planet.” 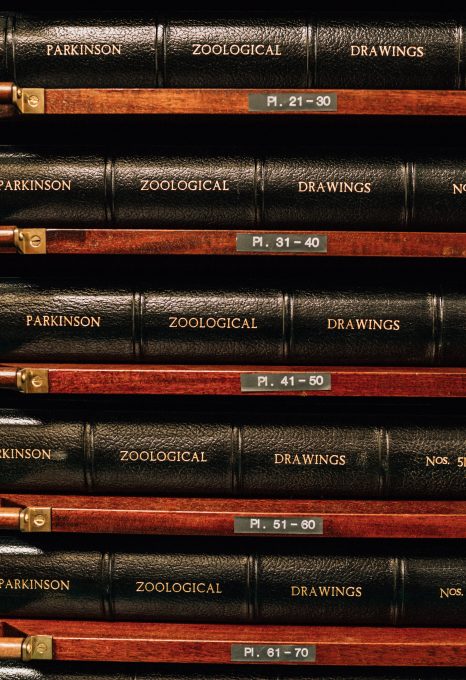 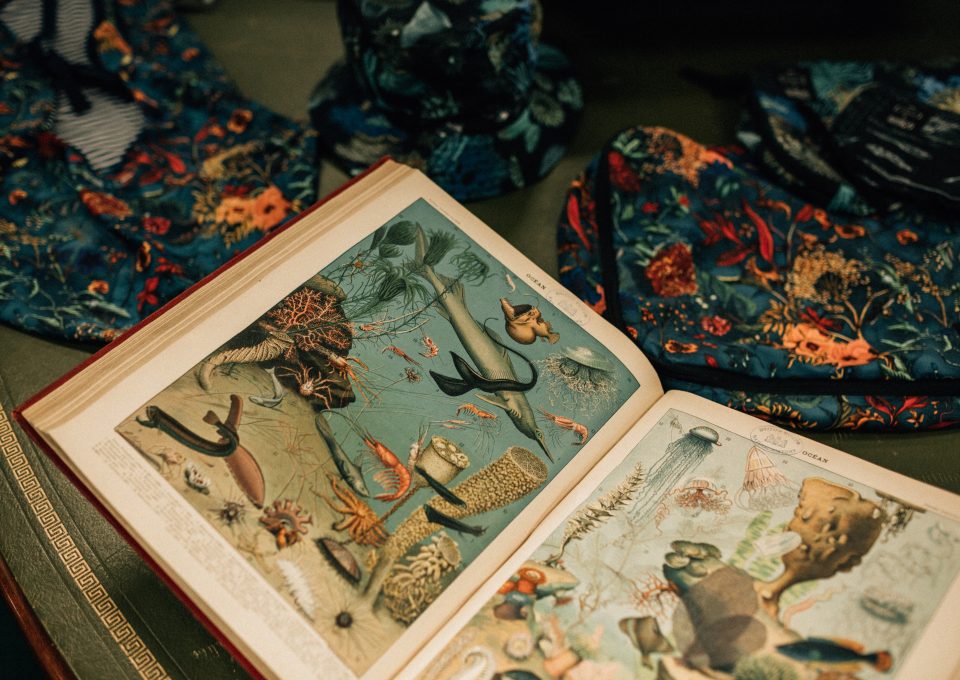 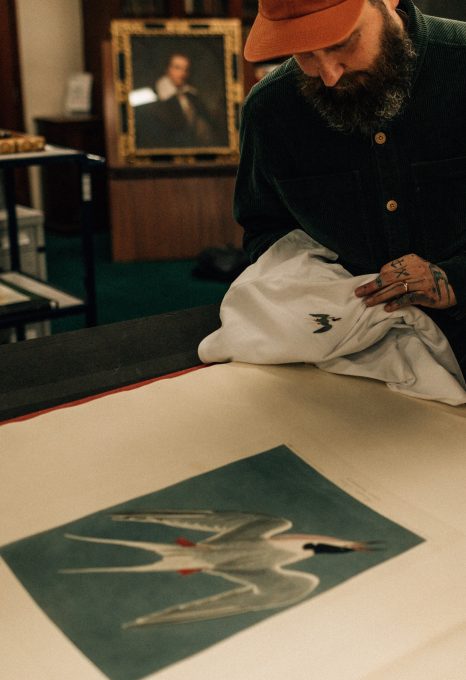 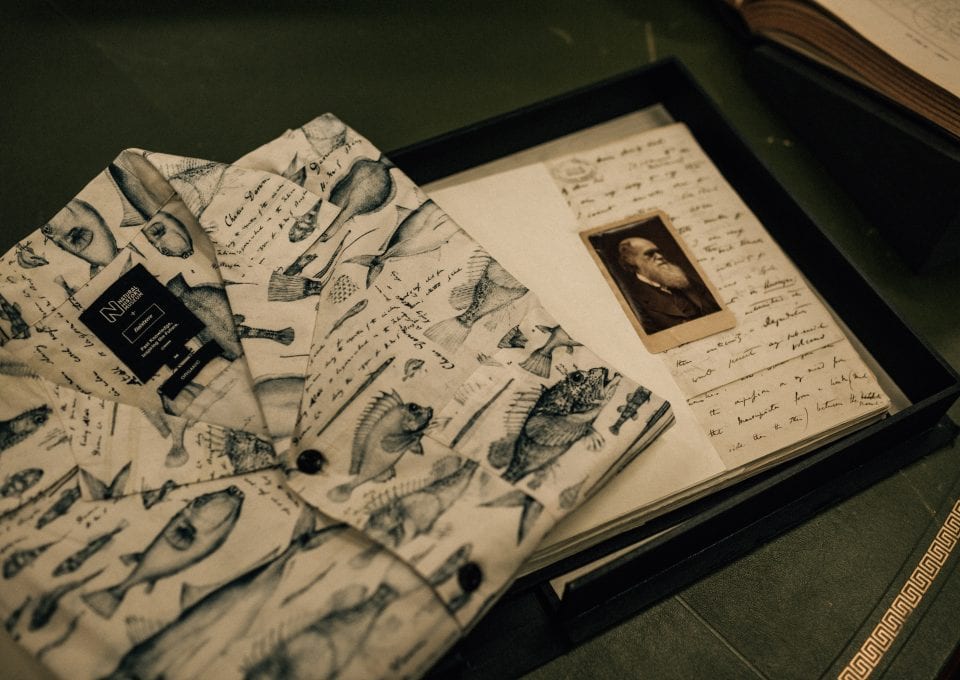 To help pull some ideas for prints together, the team enlisted the help of Andrea Hart, Head of Library Special Collections at the NHM. She said: “It is an enormous privilege to curate and look after these wonderful collections that inspire not just future scientists but also people like yourselves [Finisterre] to come in to collaborate with us, create new ways of engaging and inspiring others.”

Together, they selected four icons of natural history to feature within the folds of the new collection. Charles Darwin, John James Audubon, Pierre Larousse and the revolutionary Maria Sibylla Merian, who took to the high seas in 1699 to travel the Globe, illustrating the insect world. “She [Merian] was outstanding, I think that’s why she is so celebrated today,” said Hart. “She used the sea, she travelled to Suriname at the age of 52, following her passion.”

“You can’t really not talk about Darwin, so that was a no-brainer,” said Todd. “They had his original hand-written letters. We actually used his signature on the Darwin print. He used to write just as you do normally, but then because he would be off exploring on the HMS Beagle and started running out of space, he would turn the pages sideways and write back across them – it was like a checked shirt of writing.”

Some key players in the collection include Audubon’s Roseate Tern, which he described as the ‘Humming-birds of the sea, so light and graceful were their movements’ in his celebrated work, Birds of America. Merian’s detailed illustration of a bee has been used to represent hard work in the face of great challenge, highlighting their importance as key pollinators that enable both plants and animals to survive. And finally, there’s Hope the blue whale, a famous character from the NHM’s main hall. Hope is a symbol of how we have the power to protect our ecosystems and species. Famously, the global blue whale population recovered from the brink of extinction, after being placed under protection in 1931.

With great stories come great responsibility. When creating art or fashion celebrating the natural world, it would be in poor taste for those pieces to potentially cause further damage to the already struggling environment. After years of scouring trade shows in search for recycled fabrics, they discovered a company called Econyl, which creates Eco Nylon using discarded fishing nets. There are now schemes where companies pay fishermen to collect plastic waste from the ocean for the production of Econyl.

“Nylon is an incredible fabric,” said Todd. “It’s very easy to blame all synthetics and want to use only cottons and wools and natural fibres. For its intended purpose, there is still a value to synthetic fabrics, but durability is the key. With a circular economy, these fabrics essentially should be able to be melted down and repurposed and then built back into a yarn over and over again. The sad truth is, there’s a hell of a lot of waste out there. When we’re trying to protect our playground, we want it to be protected in every way possible. That’s about preservation above and below the waterline.”

“The sad truth is, there’s a hell of a lot of waste out there.” 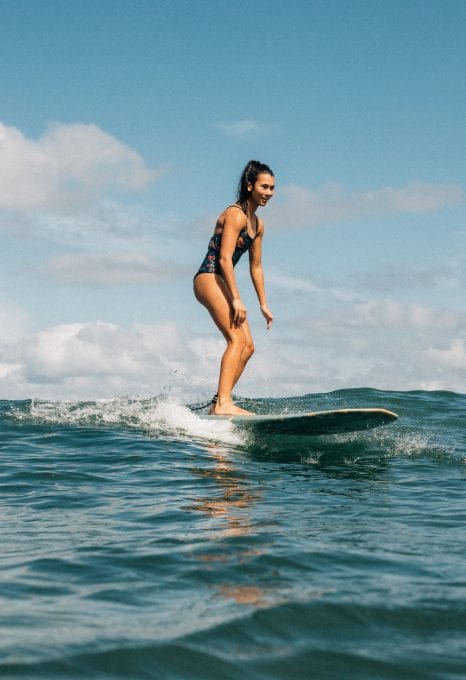 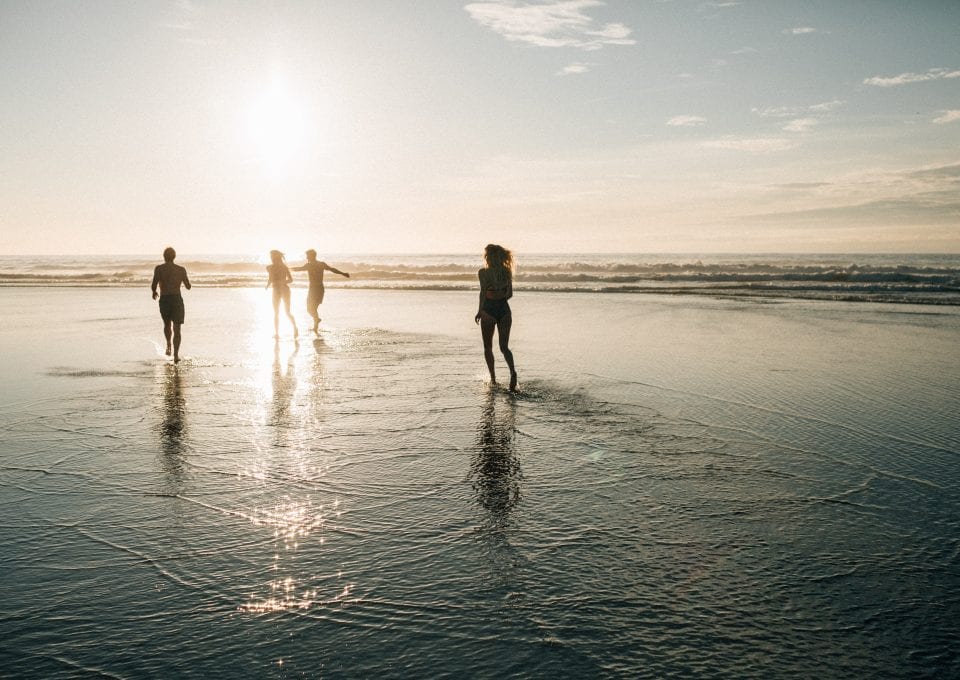 “We were able to communicate all those stories about exploration and adventure across the ocean.”

“I think it’s so important that organisations are looking at their sustainable footprint,” Hart told the team. “It’s a cross generational issue and I think the more that we can use knowledge and history of the past, but bring that up to date with technology either through science or through collaborations to visually stir people into either actions or to be more conscious of how they’re living and what they’re using is absolutely wonderful and essential.”

Our bodies have been used by brands as billboards for a long time. While the passing trends of slogan tees and the latest must-have pieces may come and go, it’s becoming more possible to literally wear our passion for conservation on our sleeve. Simply by buying sustainably sourced products from brands with messages that we believe in, that make a positive contribution to the causes we care about, we are making a choice about the stories we share with the world. And it’s our day-to-day choices that form the steps to greater change.

“It’s more than just a trend aesthetic,” Todd mused. “For us, it was definitely that association with one of the world’s greatest museums and getting these stories out there. We were able to communicate all those stories about exploration and adventure across the ocean, but also about extinction and preservation. I think when you apply a deeper meaning like that there’s just something more desirable, there’s something more considered that makes you want to be a part of the project.”

Oceanographic Magazine is available to buy in all Finisterre stores, and from the Finisterre website.

“We were able to communicate all those stories about exploration and adventure across the ocean.”