20 February marks World Whale Day and there really is nothing more magical than an encounter with a gentle giant underwater. Looking into their all-knowing eyes, you’ll quickly realise you are a visitor in their world. Supporting responsible whale tourism around the world is a great way to support local conservation efforts and catch a glimpse of the ocean’s largest ambassadors.

Thanks to the brutal practice of whaling over the last century, whales are still recovering from plummeting populations: nearly three million whales were killed. Today, whales (and their dolphin cousins) face constant threats from entanglements in fishing gear, ship strikes, noise, pollution, and habitat loss. Further, plastic particles outnumber plankton in many of their key feeding grounds.

Researchers from Harvard University have determined that whales’ feeding habits actually ‘fertilise’ phytoplankton, which in turn provides half the world’s oxygen, scientific evidence that firmly links healthy whale populations to the fight against climate change.

Whether you love whales, or not – it’s critical to protect them. Healthy whale populations play a vital role in our world’s largest and most important ecosystem – an ecosystem that provides more oxygen than all the rainforests combined is our best defence against rising CO2 levels, and provides more than a fifth of the world’s population with food.

By protecting whales and their habitats, we are ultimately protecting ourselves. Taking action to protect whales could come in the form of going plastic free, joining a local beach clean or becoming a diver, while supporting responsible ecotourism and whale tourism by swimming with whales. When we see something, we care about it more. Your first whale encounter will make you a whale advocate for life – and you can do so with dive providers all over the world. It also ensures that whales are protected around the world – thanks to the tourism impact upon local economies.

Researchers from Harvard University have determined that whales’ feeding habits actually ‘fertilise’ phytoplankton, which in turn provides half the world’s oxygen.

As protected species in most of the waters of the world, often you are limited to viewing whales from afar on the deck of a boat. But if your dreams of swimming with whales run deep, then the diving organisation PADI knows where in the world it is possible to not just view them from the deck of a boat, but to enter the water and do responsible swimming with whales. From sperm whales to humpbacks to the charismatic orcas (who are actually dolphins but definitely deserve a spot on the list), we explore some of the places around the world where it’s possible meeting and swimming with whales underwater.

Humpbacks are famous for their mesmerising whale songs, which can be heard by other whales many thousands of miles away. Growing 50 to 60 feet long, they are strong swimmers that can propel themselves completely out of the water and into the air (aka ‘breaching’). Getting their name from the small hump in front of their dorsal fin, the underside of each whale is unique in its pattern and pigmentation. Perhaps the greatest thing about humpbacks (besides their crazy water acrobatics) is that they are known to blow bubbles in order to confuse and catch fish.

Their long migrations lead humpback whales from the poles to the equator, allowing whale lovers to have close encounters along many diverse coastlines. While there are pretty tight regulations against swimming with humpbacks in much of the world, there are a few where it is legal through sustainable tourism operators.

Every July through October, huge numbers of humpbacks travel north from Antarctica to Tonga to mate and calf. The best places to swim with the whales from my experience are the islands of Vava’u or Ha’apai. Only a handful of boat operators receive permits to go near the whales each year, and each boat can only take a small number of people. From August to October, humpbacks travel to Tahiti to birth their calves in the calm, warm waters off the island. Today, French Polynesia is a designated shark sanctuary and exclusive economic zone (EEZ) in order to protect its incredible marine life. 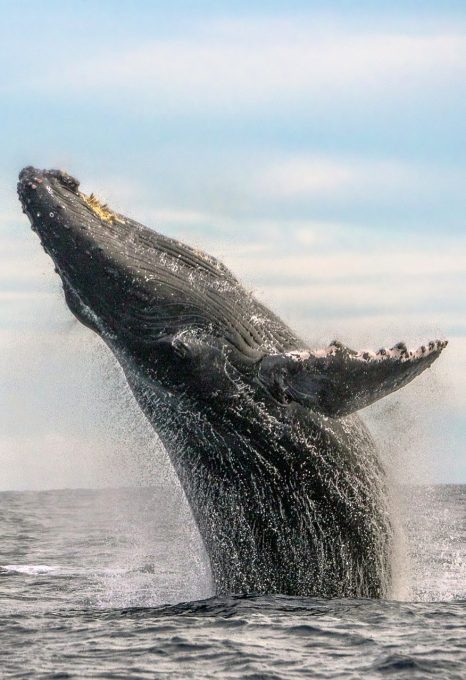 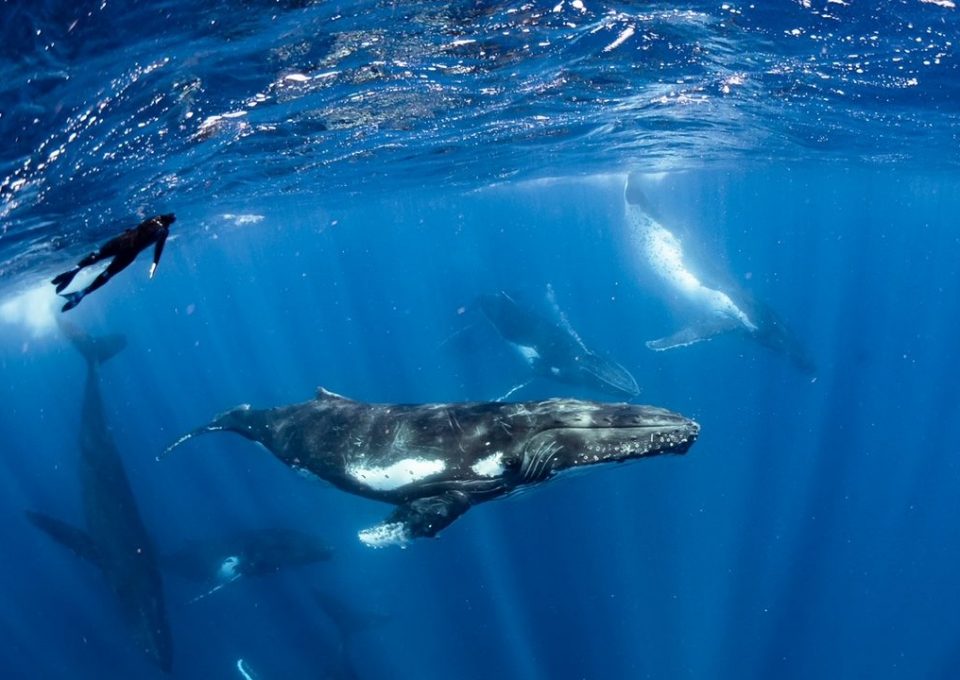 From June to November each year, approximately 40,000 humpback whales migrate along the coastline of Ningaloo Marine Park, including Ningaloo Reef, in order to feed at the poles. Also referred to as Australia’s coral coast, Ningaloo is the site of a thriving coral reef which is home to other marine life including dolphins, rays, and turtles.

Hundreds of humpback whales travel up the coast from Durban to Mozambique each July through October to mate and calf in the Indian Ocean. The coastal town of Tofo, which is also known for its population of whale sharks, is a great home base, where you can both snorkel and dive with the whales, as well as the countless other marine creatures that call the area home. Or you can catch them off the coast of South Africa during the infamous and epic sardine run.

The Dominican Republic’s Silver Bank is in a 650-square-mile marine sanctuary (now expanded as part of the ‘Sanctuary for the Marine Mammals of the Dominican Republic’) located about 50 miles north of the island. A large population of North Atlantic humpbacks gather here each winter and spring to mate and calf from the months of January through April.

Sperm whales are the largest of the toothed whales, as they can grow to be nearly 60 feet long, and are recognisable by their huge, rounded foreheads. They can dive down more than 3,000 feet (deeper than nearly all other whales) and hold their breath for 90 minutes, which helps them in their quest to eat giant squid and 2,000 pounds of fish per day. Female whales and their calves travel in groups of 15 to 20, while male sperm whales usually travel on their own. They are the loudest animals on the planet, as the clicking sounds they make reach such an intense frequency (more than 200 dB) that the whales can hear each other’s clicks from thousands of miles away. To a human, sounds over 110 dB can be painful, so sperm whale sounds could blow out your eardrums. They’re not just loud, though, but also highly intelligent. A sperm whale’s brain is approximately six times the size of a human brain, making it the largest brain of any animal on Earth.

Given that they dive down so deep and can be shy, the best way to swim with them is to find a group of ‘standing’ sperm whales, which is how they sleep. Through and through, sperm whales are gentle giants who sometimes even take interest in interacting with humans. In the winter, females and their calves can be spotted off the shores of the Dominican Republic which is located halfway between the islands of Guadeloupe and Martinique. Swimming with these whales requires some pre-planning: permits are required, only snorkeling is allowed, and you must be accompanied by a licensed operator. Furthermore, off the northern coast of Sri Lanka, sperm whales can be spotted from February to April. Tour operators need to obtain a permit from the Sri Lankan government.

They can grow to be nearly 60 feet long, and are recognisable by their huge, rounded foreheads. 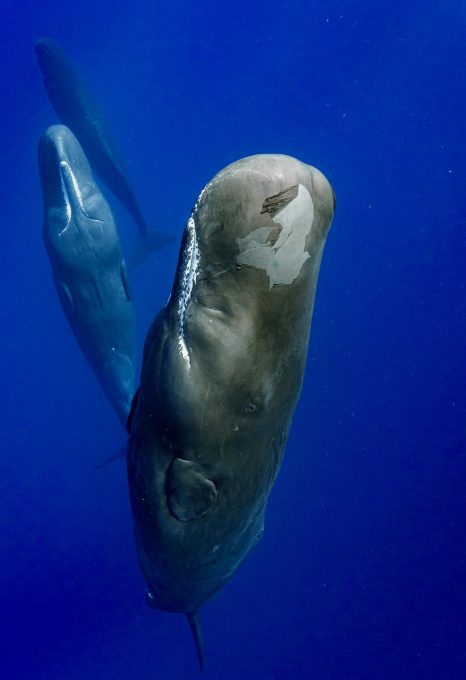 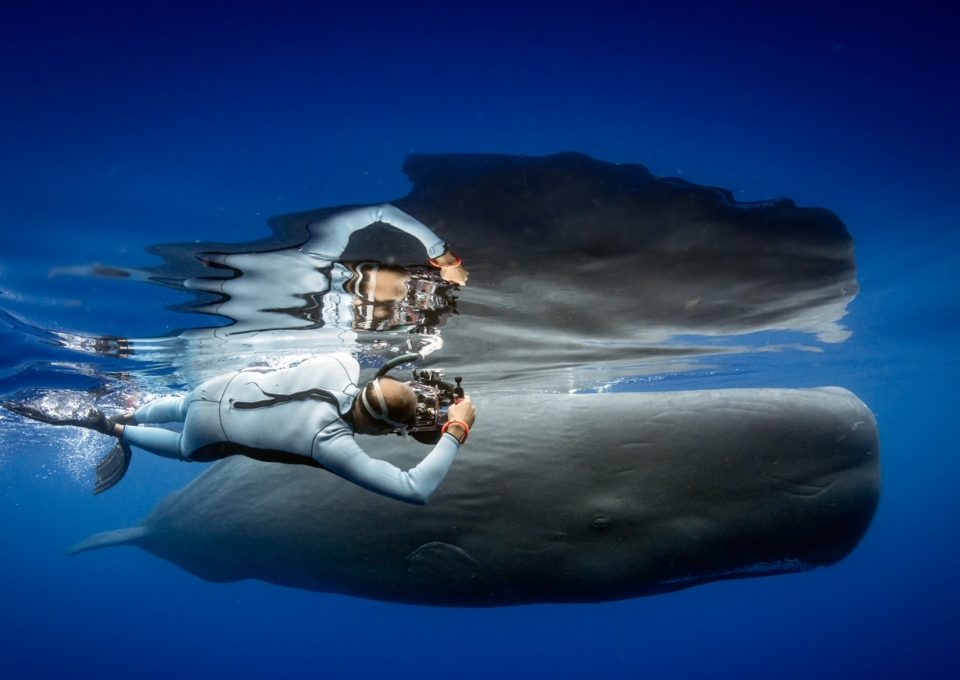 They are known to one of the most intelligent species in the ocean and they can even hunt great white sharks.

While orcas are actually in the dolphin family, they also deserve a spot on this list because they’re beautiful, amazing and a once-in-a-lifetime opportunity to swim with. They are known to one of the most intelligent species in the ocean and they can even hunt great white sharks. Orcas travel in pods of up to 40, so if you see one, there’ll be dozens more close by.

From the end of October to the beginning of February, the Tromsø region in the far north of Norway is perhaps the best place to see killer whales in their natural habitat, thanks to the high concentration of herring which brings thousands of orcas (and humpbacks, too) all to one geographical location. Scuba diving typically is not necessary, as the whales remain pretty close to the surface, but snorkelling and swimming are common each winter. Luckily, the orcas are not on the hunt for anything but fish, so they won’t take any interest in you. Because an adventure like this must be so tightly planned and regulated, spots are few and planning ahead is important.

Baja California Sur’s magical waters offer an incredible array of opportunities to swim with all sorts of marine life, including orcas. You can easily hop on an exploratory trip with PADI Dive Center Dive Ninja Expeditions with the goal of finding resident pods of orcas that live and hunt off the coastline. There are on average, three core pods of orcas that swim through these waters, making an encounter with them highly likely.

They are known to one of the most intelligent species in the ocean and they can even hunt great white sharks.