In the wild setting of Southern Leyte in the Philippines, some natives still mine sub-aquatic gold for their day-to-day survival.

It has been centuries since the tiny village of Pinut-an became something of a gold mining hotspot for explorers. Today, remarkably, there are still people who harvest the area’s gold-bearing quartz underwater, using coconut shells and high-pressure hoses which supply oxygen to their lungs. Many of the small-scale mining families have set up temporary homes and sluice boxes right on Pinut-an’s shoreline, base camps from which they can follow the gold vein extensions in search of the precious element.

During the summer months when the sea is calm and the currents mellow, Pinut-an’s shoreline is crowded with gold miners diving in search of gold or processing their silica-quartz. With the first sunbeams dancing across the rocky beach, the early risers appear from their makeshift houses to set up sluice boxes and check their mining gear. The equipment usually consists of helmets, coconut halves for digging, a weight belt made of stones wrapped in rags and clipped to a rope around the hips, home-made teak goggles and, occasionally, footwear to withstand the currents. For health reasons, an underwater work shift shouldn’t exceed two hours, but many miners work until they’re tired or the currents get too strong.

Young Danian puts on his favourite baseball cap and starts the diesel-powered compressor which will feed the lungs of five fellow gold divers. Nourished by a bowl of rice, 58-year-old veteran miner Severino Mujar who has nine years of gold diving experience checks the pressure of his hose. Whilst underwater, Severino will bite the end of the hose with one side of his mouth and move his jaw slightly to inhale some oxygen. Once the air has circulated, he will bubble it out through the other side of his mouth.

Next to the Jesus tattoo on his forehead which he believes will protect him underwater, he’s imitating the Christian cross, indicating that he’s all set for the dive. As for above-water mining, the glittering yellowish colour of the silica-quartz will indicate whether there is a possibility of sub-aquatic gold under the surface. Since the visibility underwater can be poor, the miners smash out samples of the suspected silica-quartz first to check the sound of the material close to their ears. Quartz will make a different noise to ‘standard’ rock and tell the miners if they’re close to the ore.

Today, Severino is hauling out the sand which he has collected over the previous days. The fine offshore sand around Pinut-an also bears a relatively high content of sub-aquatic gold that has collected on the bedrock through centuries of erosion and the impact of the pounding waves. Severino is pulling himself along the rope, down to a depth of 15m. Near his collection of sandbags lies the entrance of Severino’s underwater tunnel in which he was working for years until he couldn’t find any more high-grade gold, seeing nothing but mustard yellow water all day long. To haul out the sand, Severino places his bags into a big bowl which he brought down to the bottom by using buoyant drums.

He measures the weight of his load, inserts oxygen into the drums with a different pressure hose and tows the rickety construction back to shore. The following day he will run the sandy harvest through the sluice box to concentrate the gold before panning it. It took Severino four days to shovel the sand into the bags with his coconut shell, and one more day to bring the whole load to the beach. This work will likely bring him up to $170, so a total of $30 for a day’s work, just enough to feed his family of four and get the children to school. Like most of his colleagues, Severino sells his treasure to a financier in the village, or if it’s worth the trip, he brings it over to a gold buyer on the nearby island of Mindanao. The melted gold will then be sold off to get refined in major Philippine cities like Tagum or Davao from where it finally finds its private buyers in the form of jewellery or tiny gold bars.

Whilst underwater, Severino will bite the end of the hose with one side of his mouth and move his jaw slightly to inhale some oxygen. 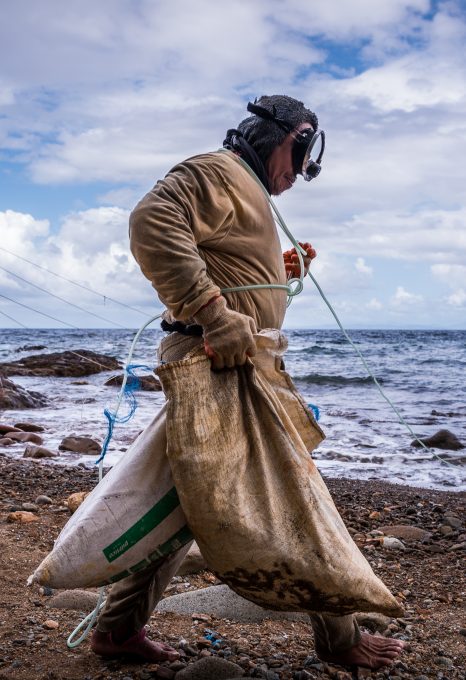 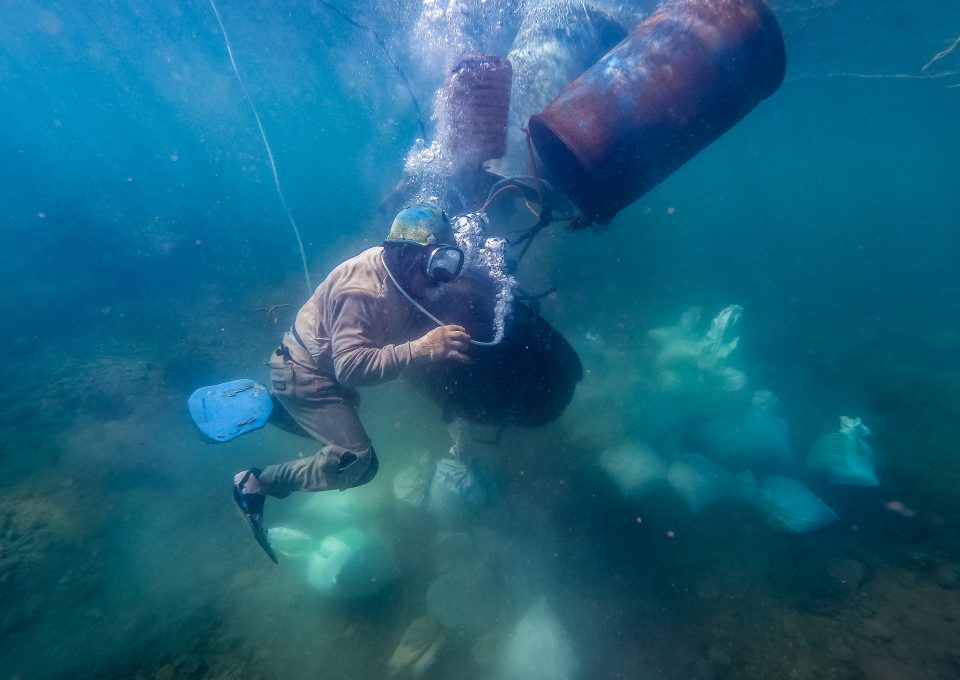 Despite the sub-aquatic gold diving venture being dominated by men, their wives and children also participate in the mining process, mainly in the amalgamation process or panning and sluicing the quartz-bearing pebbles. Small-scale mining has become an important source of income for financially vulnerable families in an overpopulated country where a tenth of its citizens work overseas for better pay. While many families strive to provide a different future for their children through education, not everyone on Pinut-an’s shoreline is fortunate enough to have someone to look after them. Many young Filipinos who join the mining operations come from broken families or dropped out of school at an early stage.

In nearby Mindanao, sluice mining was banned a few years ago by the provincial government due to its destructive environmental effects such as mercury contamination. Despite this, the small-scale gold diggers in Pinut-an continue with their livelihoods. Gold mining, even on a small scale, is practically illegal in the region but since it has been practiced for several generations, the bureaucrats can’t push through the idea of a ‘permit-only’ kind of business. It’s a tricky situation. Officials would would have to arrest three different Barangays (sub-villages) with around 300 miners of the more than 2,000 inhabitants of Pinut-an who currently work as selfmades in order to feed their families. According to locals, the Department of Environment and Natural Resources (DENR) recently investigated the region, telling the villagers that their mining operations would be environmentally distressing and affecting corals. However, the corals have been gone since the gold rush around 50 years ago. Ernie Gaylo, one of Pinut-an’s veterans who spent his entire life in the gold mining industry and about five years in submarine mining after graduating as a mechanical engineer, explains: “It looks like a desert down there.” Hence, many believe that intervening in the mining operations due to environmental concerns comes half a century too late.

But, how did a small village in the Philippines become a gold mining hotspot? It remains unclear if the Spaniards have named their outpost near the later established village Pinut-an ‘Esperanza’ (meaning ‘hope’ in Spanish) because of their gold discovery when surveying the eastern shores in the Philippines in the 18th century for a new El Dorado. But that is exactly the timespan when the search for the precious metal in the region took off. At the mining site of Pinut-an which in the local Visayan language refers to ‘a very narrow place’, the Filipinos assisted the gold-hungry Conquistadores retrieving ore from mining tunnels without obtaining any knowledge of the whole process. Instead, their labour was in high demand, and with 25 centavos per day fairly paid back then. This collaboration would not last for too long since the Spanish abandoned site and their machinery due to major landslides.

With the U.S. government declaring military rule in the Philippines on December 21, 1898, the Aldecoa Mining Company flagged interest in the promising ore veins on the shores of Southern Leyte and started operations in 1935. The Americans followed the same course as the Spaniards did, digging for gold mostly below an elevation of five metres close to the Philippine Sea. However, during World War II, the mining operations froze once again with most of the Filipinos turning back to farming and fishing.

Right after the liberation, the Aldecoa Mining Company was back at work in Pinut-an with the support of the natives until the tides of a heavy typhoon in 1949 interfered with the operations once again. The Pinoys would not show any interest in mining themselves as they were only familiar with mucking the ore out of the mountain slopes and they only had a vague idea of processing and purifying the ore. This changed in 1968 when small-scale mining above and below the surface kicked off with some gold diggers from the nearby island of Mindanao discovering gold right at Pinut-an’s beach. Observing the temporary settlers shovelling pebbles onto a sluice box with its carpet catching tiny nuggets, the locals were soon to imitate the process and became experienced small-scale miners themselves.

The main gold rush got off the ground in the mid-70s, with some 10,000 Filipinos from all over Luzon, Mindanao and other parts of Visayas flocking into Southern Leyte only armed with basic tools like gold pans, shovels, and helmets. Although classic tunnel mining marked the daily normal for the majority of freelance miners, a few brave ones started their first underwater explorations by venturing out to sea and diving from their wooden boats. From 1975 to 1978, the amateur sub-aquatic miners couldn’t afford compressors, so they would freedive for a minute or so with their Antipara (handmade goggles made of wood and plastic), while stabbing metal bars into the boulders to harvest smaller pieces of ore. Back then, the gold-bearing quartz was still covered by corals, which disappeared with the ongoing underwater gold rush. Today, since there are no more quartz-boulders left in shallow waters, the miners either harvest the oceanic sand or they dig closer to the bedrocks with tunnels measuring up to 30 metres in length that follow Pinut-an’s six gold veins extensions. After three years of freediving, the locals had earned enough money to finance diesel-powered compressors which can cater up to six divers with constant air supply, turning the submarine mining into an efficient 9-5 job.

Severino is pulling himself along the rope, down to a depth of 15m.