Unravelling one of the greatest mysteries of the ocean

Unravelling one of the greatest mysteries of the ocean

Surprisingly little is known about the reproductive cycle of whale sharks. A team of marine scientists convened in Galapagos - along with an underwater ultrasound - to see if they could unravel the mystery at all.

Whale sharks: the largest fish on the planet. And, arguably, one of the most enigmatic. While there are many things we don’t know about whale sharks, one of the greatest mysteries surrounding the species is their reproductive cycle. How and where do they mate? How long is their gestation period? How and where – and to how many pups – do they give birth? How do those pups survive in the big, bad ocean? A team of scientists in Galapagos is trying to find answers.

It’s been more than 20 years since the only pregnant whale shark to be physically examined was found in Taiwan in 1995, carrying 304 eggs and pups inside her – more than any other shark species. All of them were less than 60m in length and all of them – despite being at different stages of development – had the same father. Since then, researchers have been unable to learn more about their reproduction – until a recent expedition promised a research breakthrough.

In 2018, a team of whale shark experts visited Darwin Island in the Galapagos as part of a Galapagos Whale Shark Project (GWSP) initiative. The research they undertook in Galapagos was a world first: successfully completing ultrasounds on, and taking blood samples from, free-swimming adult whale sharks. An incredible feat which has never before been done in the wild.

The ultrasounds identified the sharks’ reproductive organs, such as the ovaries, as well as developing follicles. However, none of the scans captured embryos or egg capsules inside the uteri.

So what do these results teach us? And what does this mean for whale shark conservation? Alongside expedition leader and founder of the GWSP, Jonathan R Green, the team comprised global experts Dr Rui Matsumoto and Kiyomi Murakumo (Okinawa Churashima Foundation, Japan), Professor Alex Hearn (University of San Francisco/Galapagos Science Center, Ecuador), Dr Simon J Pierce and Dr Chris Rohner (Marine Megafauna Foundation) and Dr Alistair Dove (Georgia Aquarium). According to Mr Green, their main aim was to assess the sharks’ reproductive state because “almost nothing is known about the reproduction of these giant sharks”. The team chose this remote area in the far north of the Galapagos to undertake their research because it is one of the few places where adult female whale sharks, reaching up to 14 metres in length, can be seen each year. With a high number of females to scan, they hoped some of them would be pregnant.

On each occasion the team got into the water, it was a waiting game. “You just don’t know where the shark will come from,” says Dr Pierce. “It could be ascending from 30m, appear right at the surface or even come from behind you on the coral plateau.” Because of this, he explains, the team often spent time “hanging in mid-water doing 360s.”

Once a shark did appear, it was all systems go. “When a whale shark appears out of the blue water, we usually only have a minute to do everything we need before it disappears again,” says Dr Rohner, “either because it is faster than us or because it swims too deep.” In that minute, they attempted to capture an ID photo, collect blood and tissue samples, record ultrasound images and attach satellite tags. 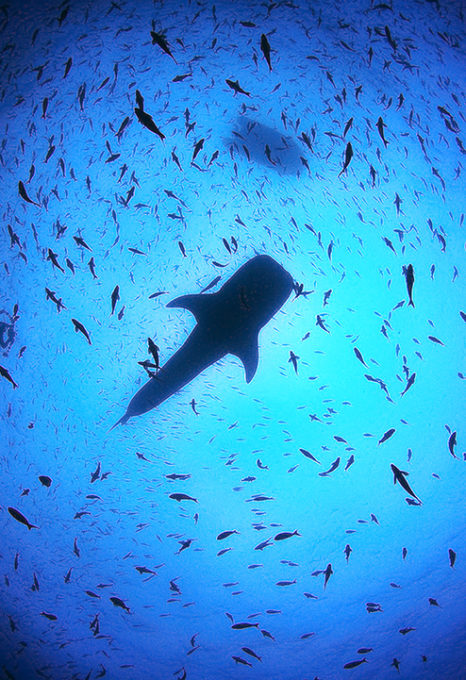 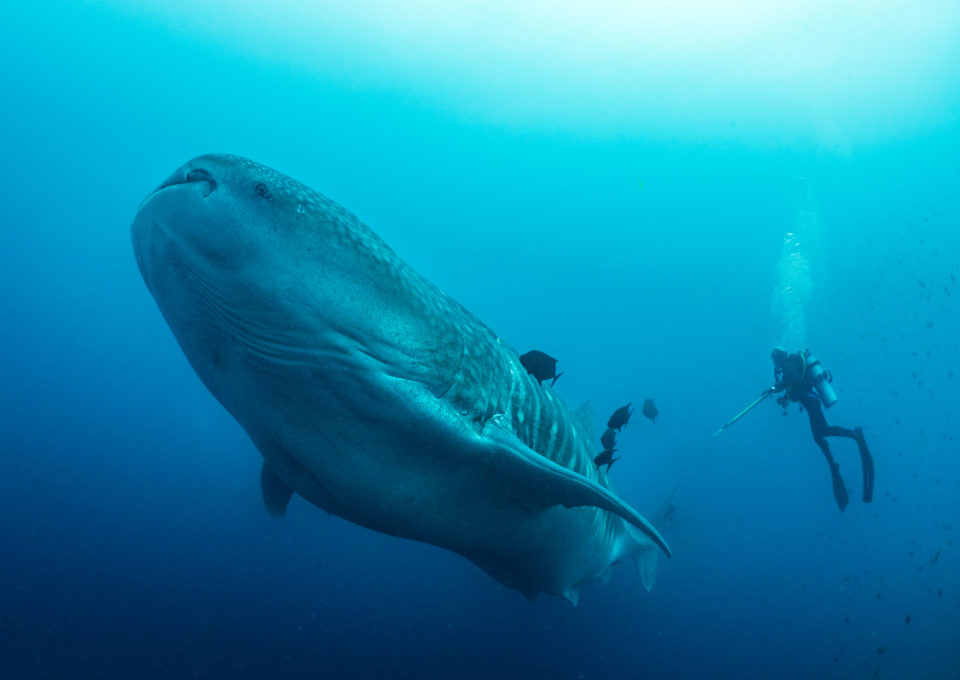