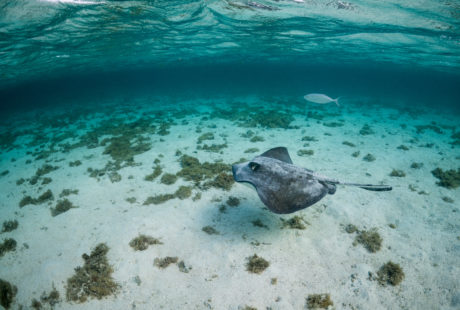 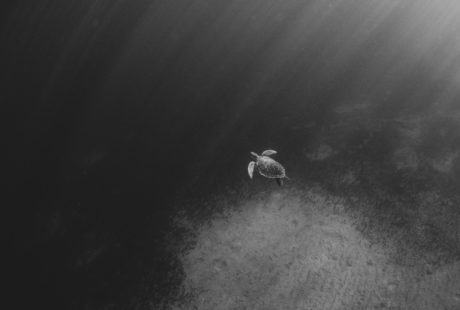 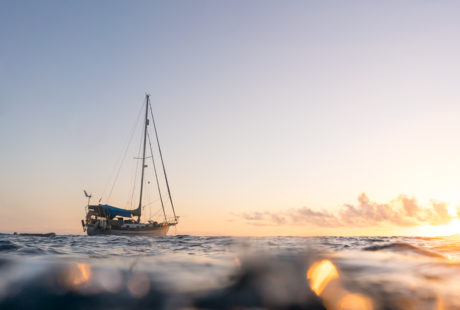 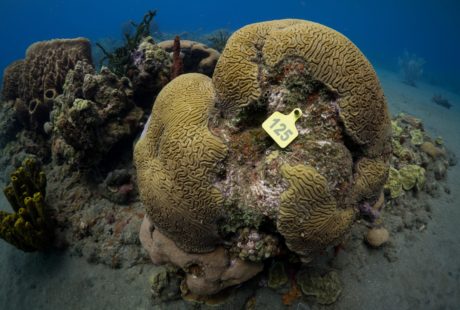 Their habit of resting almost stationary at the surface meant that they created a lingering silhouette on a smooth sea.

“Whales!’ Climbing the companion-way steps, tea in hand, three broad black fins pierced the glassy ocean surface, 100 metres off our starboard. Switching the much-anticipated cuppa for my camera and long lens, I scrambled on deck to find the best vantage point. Unlike the dolphins we had grown accustomed to seeing on passage these were slow moving and lolled at the surface, breathing noisily. Great puffs of exhaled air rose as small clouds of spray from water cleared from the blowholes. As we drew closer we cut the engine and drifted on a smooth ocean, unruffled by wind. The only sounds were the occasional clack of the boom as we rolled in the swell and short-finned pilot whales blowing as they surfaced for air; a moment that seeped deep into my being and stirred an upwelling of love for the whales.

Journeying from south-west Tenerife to La Gomera, Canary Islands, Spain on our liveaboard sailing boat, we knew our crossing would take us through waters declared a Hope Spot by Mission Blue, one of many marine areas worldwide considered critical to the health of the oceans and targeted for enhanced marine protection. This stretch of water supports an extraordinary collection of open-ocean species including a resident population of short-finned pilot whales (Globicephala macrorhynchus) and was also recently awarded the first Whale Heritage site in Europe in recognition of its outstanding whale and dolphin watching. Although wind for sailing was lacking, this made for pristine wildlife spotting conditions,  so we had high hopes of seeing whales. It  turned out they were easy to spot; their dark broad-based, sometimes hooked dorsal fin and their habit of resting almost stationary at the surface meant they created a lingering silhouette on a smooth sea. On more than one occasion during our journey we stopped to drift with them; for minutes at a time they floated at the surface resting and breathing, sometimes swimming under the boat then away again. These fellow air breathers are highly evolved masters of apnea and deep diving. Described as the cheetahs of the deep sea, the hunting strategy of the Tenerife pilot whales is to dive deep and fast in pursuit of giant squid to depths of 1000 meters or more; a high-risk/high-gain approach that targets large, speedy prey.  In freedive training we are taught to moderate our speed to conserve oxygen during the breath hold. The same applies to other deep-diving mammals where swimming speeds are optimized to reduce oxygen consumption and maximize foraging time. Yet in contrast with other apneists these pilot whales sprint to the depths and back again. This may explain their mellow demeanour at the surface, where long, relaxed recovery breathing replenishes oxygen and rids their tissues of carbon dioxide.

After a short time the whales cruised off towards the horizon and we continued on our journey east to La Gomera. As we pottered along we started noticing the shiny floats of Portuguese man of war (Physalia physalis) bobbing past. Keen to get some photos and video footage at water level we stopped the boat and took it in turns to swim over to get a close look. Fully aware of their potent sting we kept a close eye on their far-reaching tentacles. Seeing them in their natural, deep-ocean habitat like this as opposed to washed up on a beach in Wales, explained their intense blue and violet coloration. Here they blended in with their cerulean surroundings, disguised in plain sight.  Aptly named after a warship at full sail they travel by wind for thousands of miles, float trimmed and dragging behind stringy tentacles that deliver a venomous sting to prey and foe. Though most creatures suffer their fearsome sting, some predators are undeterred. Both leatherback and loggerhead turtles are too tough to feel the sting and happily include them on their menus. In fact not long after our dip, we spotted a loggerhead turtle resting at the surface, perhaps replete and digesting after a breakfast of slippery tentacles.

Our time with the whales was truly joyous and memorable, yet I feared for their safety. One very real threat we witnessed on our journey were the high-speed inter island ferries. For a whale with a tendency to rest motionless at the surface they are a perilous force to be living with and one of several threats that are driving the campaign for better protection of this area. Securing their future felt imperative that day. Their magic and vulnerability was stark but I felt a swell of hope knowing that Mission Blue is working from its own place of love to protect the whales and their ocean habitat.

Their habit of resting almost stationary at the surface meant that they created a lingering silhouette on a smooth sea.

This column appears in ISSUE 18: End of the line of Oceanographic Magazine