Marine biologist and photographer Clément Brun witnessed orcas and humpback whales feeding on giant herring bait balls in Norway. In this online feature, he shares more about this special experience.

It was 2:30pm and the sun had already set. Although the water was clear allowing for great visibility, the overall conditions for taking photos were challenging. A grey sky delivered a few snow showers reducing the amount of light underwater. In the water, I was left in awe. Everything came together. I was at the right place, at the right time.

Right in front of me, a pod of orcas worked together to push a herring bait ball towards the coastline. At the shore, there was no easy escape for the fish. They became an easy target in the shallows. The fish were trapped in water that was less than 10 metres deep, surrounded by orcas who were soon joined by several humpback whales.

When the pod of orcas left the area after feasting on the bait ball, the humpback whales kept feeding. While embracing the moment, I aimed my camera at the action to capture a glimpse of the beauty of this special predator-prey interaction. The underwater ballet-like movements of the humpback whales feeding and manoeuvring so gracefully in shallow depths and the mesmerising circling of the herring ball that looked like all the fish transformed into one single organism were breathtaking. The rocky bottom of the fjord added a sense of roughness to the scene.

The underwater ballet-like movements of the humpback whales manoeuvring so gracefully in shallow depths were breathtaking. 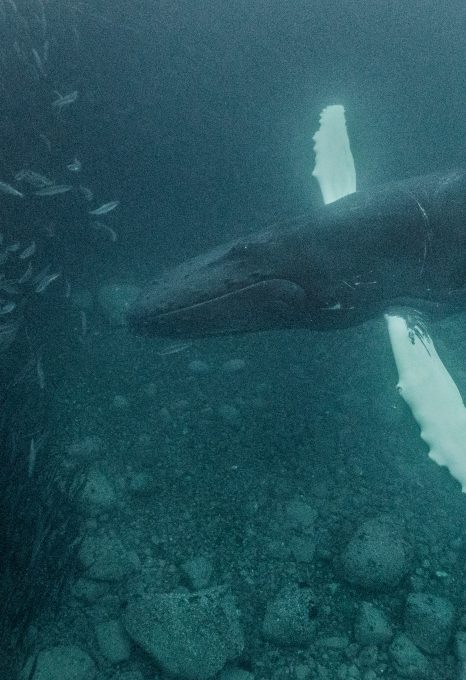 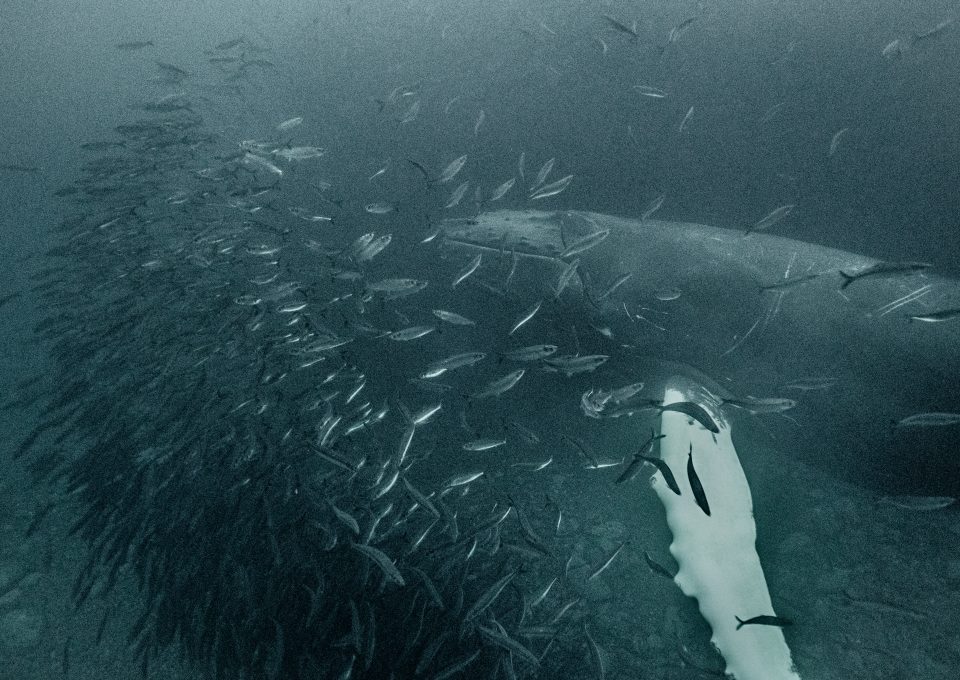 When the humpbacks swam close to the school of fish, it looked as if they were flying with their distinctive white pectoral fins. They would slowly approach the bait ball, would speed up with their tail and lunge feed. On one of the images, we can clearly see the extended lower jaw right after the humpback had engulfed a large quantity of prey. After a few lunges, these true leviathans seemed to have had their fill and left the fish alone. I have been fortunate enough to witness many feeding events over the past four years during this special herring migration event. This collection of images illustrates one of the most special moments I was lucky to see with my own eyes. A combination of luck and great planning resulted in these 15 minutes of water magic in which I saw the large humpbacks circling and lunge feeding in the shallows.

Humpback whales (Megaptera novaeangliae) are known for their long annual migrations on which they travel back and forth across ocean basins. A significant part of the North Atlantic humpback whale population feeds in the Barents Sea during the summer months, a shallow shelf located to the East of the Svalbard archipelago and to the North of the Norwegian mainland. At the end of the feeding season, in the fall, these whales start their journey south towards the tropics where they gather to reproduce. Mainland Norway is thought to be a migration corridor for this part of the population between the feeding grounds in higher latitudes and the breeding grounds in lower ones.

Mainland Norway is thought to be a migration corridor for this part of the population. 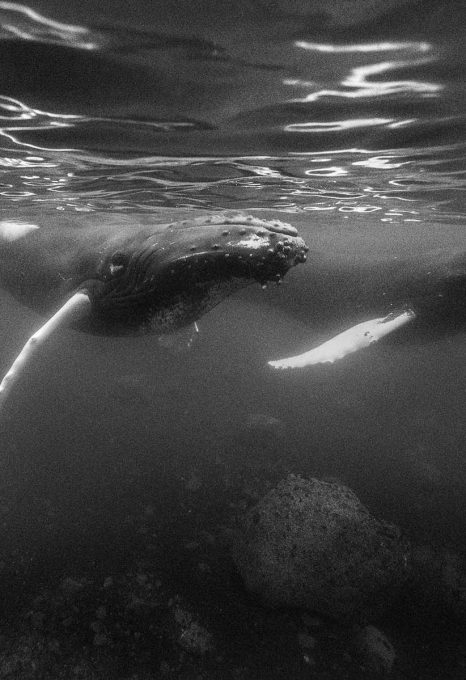 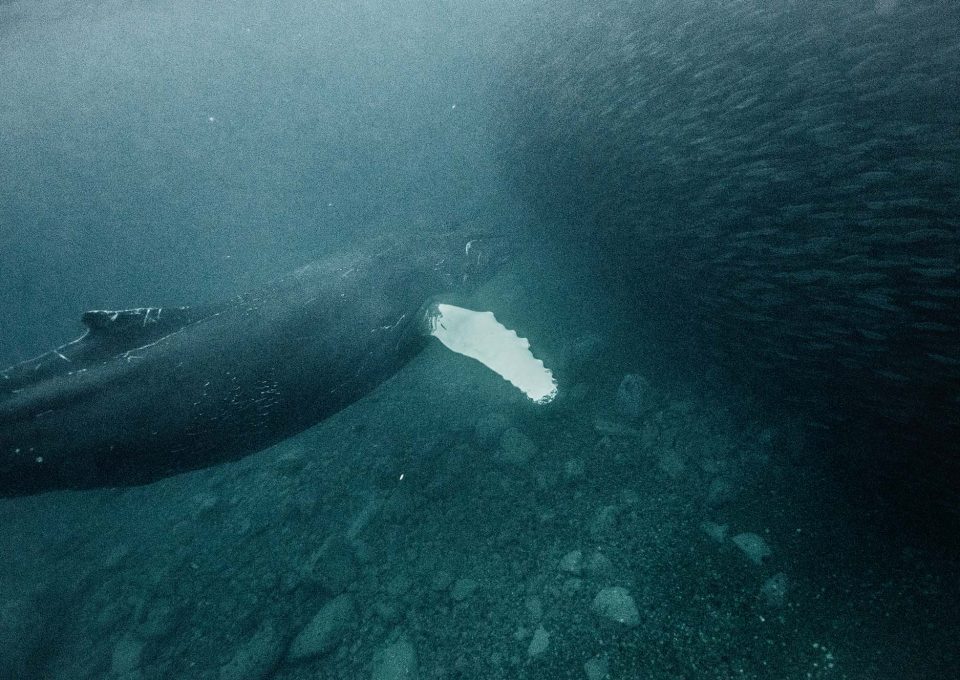 Interestingly, while on their way to lower latitudes, some individuals delay their migration. They seem to prolong their feeding season to forage on herring that have been consistently overwintering in coastal areas of Northern Norway for the past ten years. Herring enter the fjord system in the fall and gather in large numbers in the region. The high density of herring might provide important additional energy for these humpbacks before they cross the Atlantic Ocean basin and reach their breeding grounds thousands of kilometres away.

But not all individuals decide to stop over and feed on herring. This suggests that some individuals might need this extra energy intake more than others. By looking at the size of the whales which do stop over here (they mostly are big whales) and deciphering very old whaling record data from around 100 years ago, it is thought that a large proportion of these humpback whales could potentially be pregnant females. Because they are not in a hurry to get to the tropics, they would take advantage of the herring availability in Norway before embarking on the rest of the migration.

These ‘winter humpbacks’ usually feed in the presence of orcas, a species that is known to follow the herring all year around in Norway. Although orcas belonging to this population occasionally feed on marine mammals, such as seals and harbour porpoises, herring constitute the main food source of their diet. During winter, the herring usually try to stay in the deep parts of the fjord to be better protected from predators. That’s why these encounters are so special – it’s absolutely fascinating to see humpback whales and orcas interacting with each other, while feeding on the same prey. After all, in other parts of the world, orcas are known to attack and feed on humpback whale calves occasionally.

But not all individuals decide to stop over and feed on herring. This suggests that some individuals might need this extra energy intake more than others.

Sharing images of the natural world has the power the bring us closer to nature and I believe it can shape the way we connect to wildlife. While contemplating the natural world, I always feel hopeful because there is still so much beauty to be seen. We need to protect what we have left. We need to change the way we look at wildlife and at marine life in particular. We need to love, respect and protect it.