Marine artist, Jason deCaires Taylor’s latest installation addresses our species’ connectedness with the ocean, our comprehension of the damage being done by climate change and, critically, the generational divide regarding both culpability and willingness to act.

At first glance, the glistening metallic structure appears as a mirage on a horizon. Located in a remote turquoise Maldivian lagoon, figures come into view on the shining cube, taking in their Indian Ocean surroundings from their elevated vantage point. On closer inspection, the figures reveal themselves as jesmonite sculptures, encrusted with the coral of the lagoon.

Welcome to Coralarium, the latest installation from British sculptor and underwater artist Jason deCaires Taylor. Coralarium, located in the clear shallow waters of the house reef of Fairmont Sirru Fen Fushi, is the latest jewel in the crown of deCaires Taylor’s growing body of work in unusual aquatic locations around the world.

Stylistically, the installation riffs off a theme familiar from deCaires Taylor’s previous permanent exhibitions, including Museo Atlántico in Lanzarote and Museo Subacuático del Arte (MUSA) in Mexico: submerged human forms that are subsequently colonised by the coral and sea life surrounding them. In the Maldives, he takes this theme to the logical next step, teasing the viewer as figures are concealed and revealed with the incoming and outgoing tide. Now you see me, now you don’t.

Coralarium is a triumph of grace, serenity and intrigue. Viewed from the shore, the exposed portion of the structure reflects and mirrors the sea and the sky, taking on the hues of the sun and the moon as they change throughout the day and the night. Jason deCaires Taylor’s installation is visually arresting, especially in its shoreline location on this tiny island where little more can be seen than the sun, the moon, the stars and the occasional seabird.

Viewed from the water, thirty hybrid forms, part-human, part-plant, part-coral, symbolise the dependence of humans on the natural environment. Moulds of endemic banyan trees, screw pines and corals are integrated with casts of local people to demonstrate our connectedness.

As strong as the visual cues are in his art, deCaires Taylor spins an equally strong narrative theme. “I’m always trying to walk the line between creating something that is aesthetically interesting while putting out a positive message and highlighting some of the negatives,” he says. “With Coralarium, the stainless steel building reflects all the light from the horizon and brings together the sky and the sea in one art installation.

“But at the same time, I’m trying to talk about rising sea temperatures and rising waters. A lot of the sculptures at the bottom of the installation are of children and some of the higher ones are of adults. It asks: what kind of future are we leaving to the next generation?”

Viewed from the water, thirty hybrid forms, part-human, part-plant, part-coral, symbolise the dependence of humans on the natural environment. 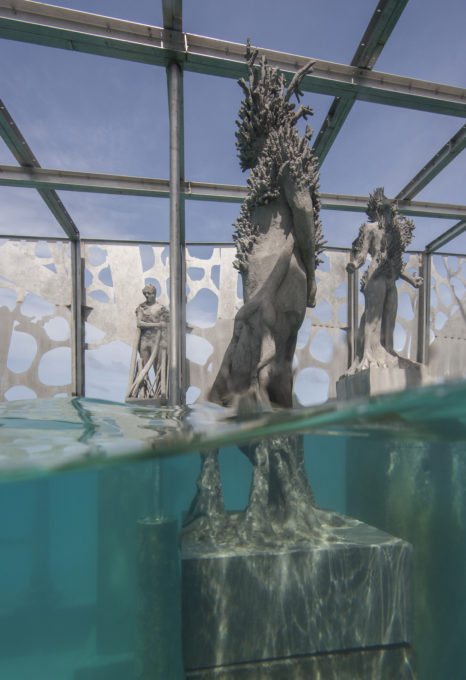 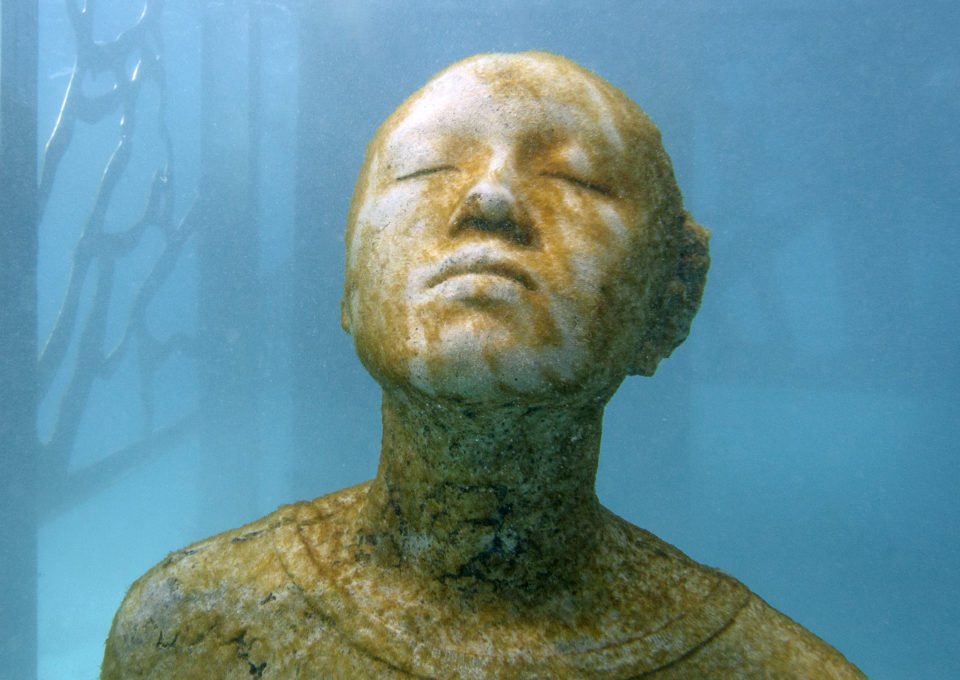