Birth of a jellyfish

Birth of a jellyfish

We started our studies on zooplankton in the Mediterranean more than 35 years ago.

By that time, we were surprised, that some groups of animals such as gelatinous zooplankton were hardly studied (in most cases due to the lack of adequate means) and did not arouse the interest of scientists. We set out to change this trend and, little by little, we became involved in an exciting field of research.

We discovered the high diversity of species and their abundance and, above all, the important ecological role of jellyfish and siphonophores in planktonic communities and in marine food chains. A few years later, interest in the study of jellyfish grew enormously due to a phenomenon that even today worries both scientists and society: jellyfish blooms. Despite the fact that we still lack conclusive data, there is enough evidence about jellyfish populations increasing year after year in some areas of the Mediterranean and in the global ocean. Moreover, large numbers of jellyfish increasingly interfere with different anthropogenic activities, leading us to expand the lines of research on jellyfish in order to help explain the causes of these proliferations.

One aspect that has always attracts our attention is where large amounts of jellyfish appear in coastal areas during the summer. We know from previous studies that many jellyfish come from small polyps installed on different substrates in coastal areas. From these polyps the new jellyfish are born, but this moment is almost impossible to see in the field. Thanks to the jellyfish cultures in our experimental aquariums we were able to observe and study this impressive moment of the birth of a jellyfish. A unique phenomenon in marine life and, despite knowing the whole process of transformation from the polyp well enough, it still fascinates us.

There is enough evidence about jellyfish populations increasing year after year in some areas of the Mediterranean. 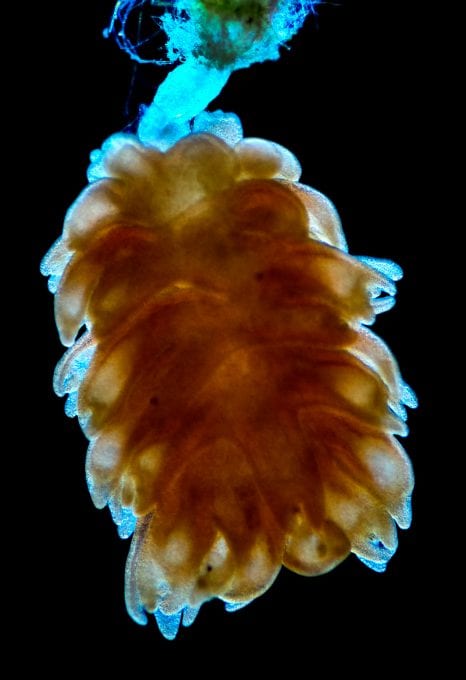 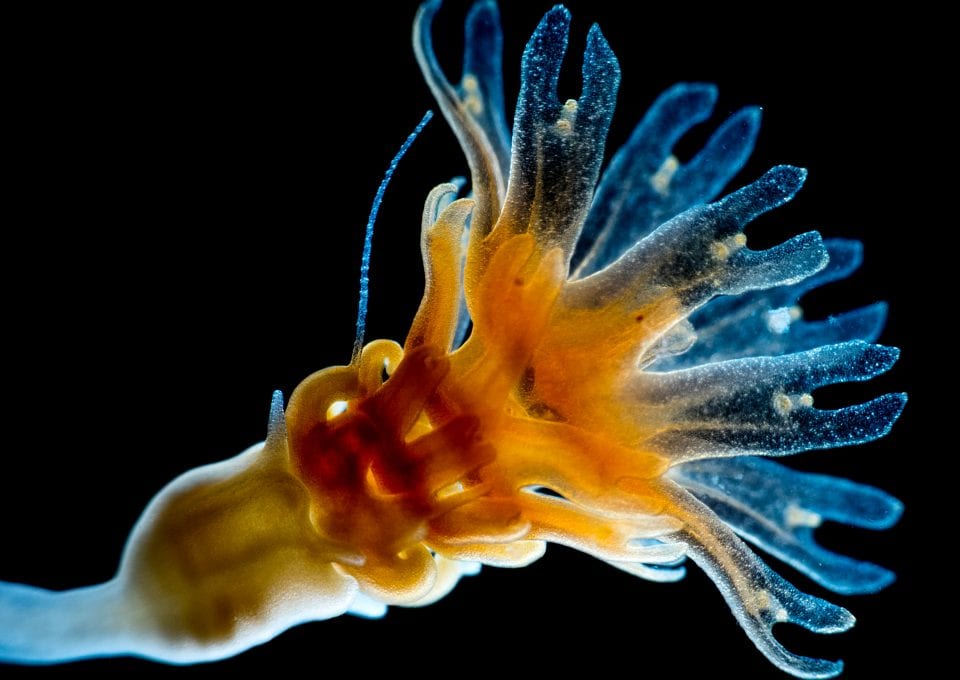 The life cycle of the scyphozoan’s jellyfish are cataloged as simple or complex. The complex life cycles are represented by a metagenetic model where individuals alternate different live forms and reproductive models due to the highly seasonal environment. We can start describing the life cycle when males and females of adult jellyfish release sperm and ovules into the ocean. The fertilized eggs undergo a metamorphosis into planulae, which sits on the benthic substrate and gives rise to a polyp in a slow process.

The morphology of the polyps varies according to the species, but they are generally concave upwards with a lot of tentacles that contain stinging cells called cnidocytes, used to catch plankton and feed. The reproduction of the polyp is asexual. During this stage, parental polyps generate new polyps through buds and stolons. When the resources are limited, the polyps are able to adapt to the environment for long periods of time in resting stage. However, when the environmental conditions are optimal for their development, the polyps through an asexual reproduction process known as strobilation, fissions perpendicularly from the oral-aboral axis giving rise to multiple ephyrae that develop in a pelagic environment corresponding to the medusa phase. The amount of newly released ephyrae from a polyp varies according to the species. In the case of the Aurelia genus, a polyp can release between six and 21 ephyrae into the ocean in each strobilation. This reproduction strategy implies that the survival of the species is ensured, because only a low percentage of the ephyrae will grow to become adult jellyfish capable of reproducing sexually and starting the biological cycle again.

Although there is no clear evidence, some studies suggest that the increase of artificial structures mainly in coastal areas, such as dykes or docks, provide more space for the larvae to settle, giving rise to new polyp populations of for example the most common jellyfish species in the world, Aurelia aurita. Therefore, coastal habitat modifications as well as other human activities like eutrophication (when a body of water becomes overly enriched with minerals and nutrients), global warming, translocation and overfishing have been considered significant reasons of jellyfish outbreaks seen most frequently in recent years. What a paradox, right? We as humans and the consequences of our activities are responsible for jellyfish blooms.

Some studies suggest that the increase of artificial structures mainly in coastal areas, such as dykes or docks, provide more space for the larvae to settle.

Adult jellyfish are easier to differentiate among species because they have different morphologies and coloration patterns. However, identifying ephyrae is more complicated, even for us. If we think of an ephyra, a snowflake comes to mind. The growth rates of ephyrae vary according to environmental conditions, like the quantity and quality of food in the ocean. In captive conditions, an ephyra can develop typical jellyfish morphologies in about four weeks; however, polyp cultures can go years without strobilation. In the laboratory, when we need jellyfish for experiments, we force the strobilation process through changes in temperature and food increase. To obtain small ephyrae of Aurelia spp. it is enough to simply lower the temperature to 12ºC, feed the polyps daily and make water changes, so that they have the optimal quality. In our opinion, working with jellyfish in the laboratory is an easy task thanks to the polyp phase, that represents a resting and resistant stage that can be maintained in laboratory easily and induce strobilation only when needed.

The switch between asexual (polyp phase) and sexual (medusa phase) generations does not always occur in scyphozoans species. The mauve sting Pelagia noctiluca, the more common jellyfish in the Mediterranean, has a simple life cycle. Their larva planula is metamorphosed directly in ephyra lacking the polyp phase. These tiny jellyfish we’ve seen hatch are in the most fragile phase of the jellyfish life cycle. With almost no predators, these small jellyfish will grow into large populations.

The switch between asexual (polyp phase) and sexual (medusa phase) generations does not always occur in scyphozoans species. 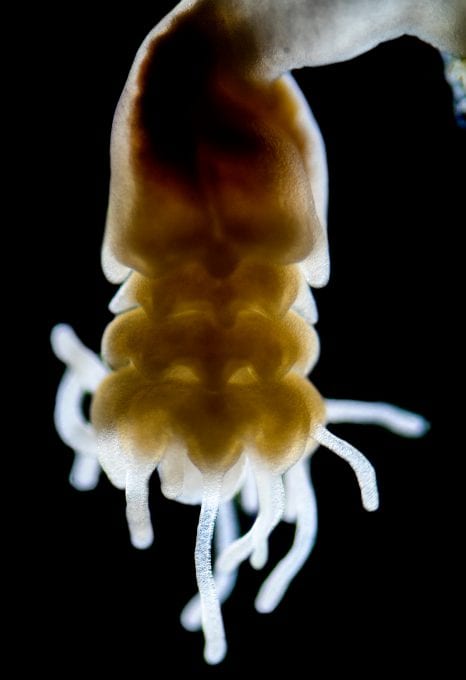 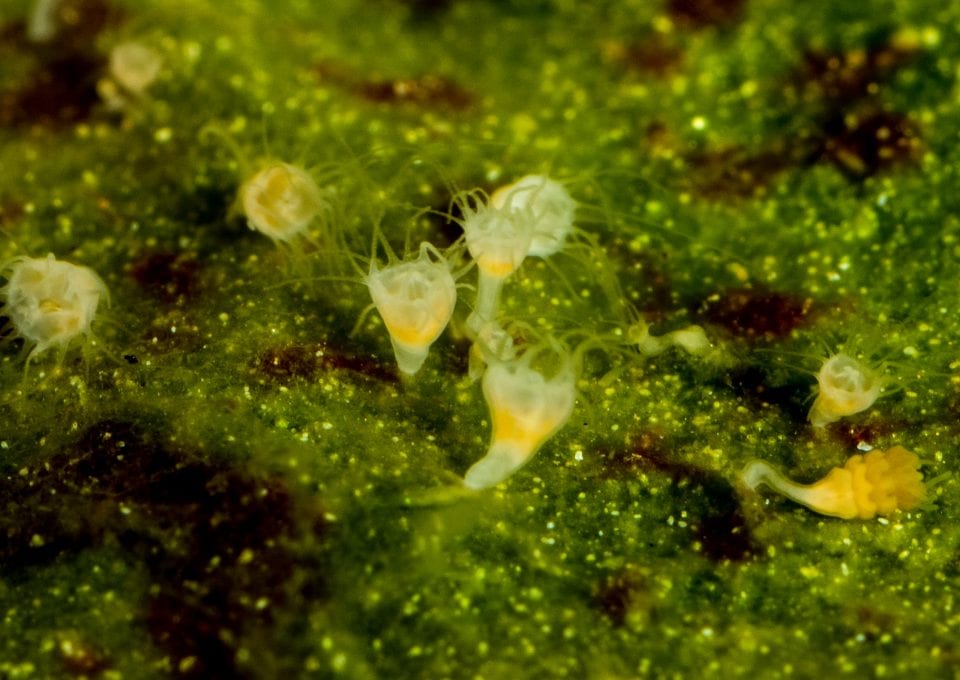 The massive and more frequent arrivals of jellyfish into coastal areas of the Mediterranean are a warning indicating that something is changing.

Probably one of the characteristics that have allowed the incredible success of coastal jellyfish, is the fact of having two very different stages in its life cycle, which also inhabit in two different systems. The polyps are benthic and ephyrae and medusae are pelagic. If one of the stages suffers an environmental or biological impact, the other can resist. Jellyfish are one of the most successful organisms of animal life on the planet. Fossil records tell us that they have been around for more than 500 million years and their morphological characteristics have hardly changed.

When we can swim near a jellyfish, we see a simple animal but one that is very well adapted to its environment. They swim calmly and wait to contact prey with their tentacles and/or oral arms. They never attack, they sting us because we just happen to come into contact with their tentacles. The beauty of a swimming jellyfish is comparable to that of beautiful animals like butterflies.  In fact, jellyfish are sometimes known as sea butterflies. Just like butterflies, which that are born from the transformation of caterpillars, jellyfish are born by asexual reproduction from polyps that – unlike caterpillars – remain alive for many years. Both butterflies and jellyfish are born to carry out the sexual reproduction of the species and once they have fertilised, they die or become senescent. The life cycle of both groups is similar even the biological processes involved are different.

Our current studies are focused on the biology and ecology of jellyfish but also emphasising in the relationship between these organisms and human society. The massive and more frequent arrivals of jellyfish into coastal areas of the Mediterranean are a warning indicating that something is changing. The overexploitation of fisheries resources has left jellyfish without predators and without competitors, encouraging their growth. When we see many jellyfish stranded in the sand, it is as if we found a bottle with a message inside. So, we open the bottle, we take out the message and read it. The sea is asking for help.

The massive and more frequent arrivals of jellyfish into coastal areas of the Mediterranean are a warning indicating that something is changing.