Streets were empty, shops were closed, only police cars were on the move.

When the pandemic took a hold of Australia, I no longer recognised my hometown Byron Bay. But looking out at Bryon’s deserted main beach, all the tourists gone, I realised the local dive spots would be just as empty of people. My mind turned instantly to Julian Rocks, one of Byron’s most popular dive sites, and one I have visited hundreds of times – but always with crowds of others. I imagined diving it alone. It was a once-in-a-lifetime opportunity. I had to get out there.

With 2.5km of ocean between the mainland and Julian Rocks, and with no dive boats running to get out there, I enlisted the help of good friend and keen kayaker, Roger Koenig. Amusingly, Roger had been the subject of an anecdote relayed to me just a few weeks earlier, a local skipper and lifeguard telling a story of a man out at Julian Rocks on his own, in a kayak, in two-metre swell. Needless to say, the skipper thought it was foolhardy. I knew he was talking about Roger, but decided to keep that information to myself. A few weeks later, here I was looking to do the same…

On a flat day, a 5km round-trip kayak to Julian Rocks is no big deal. However, Byron is rarely flat. The weather conditions at the time were far from ideal and showed no signs of abating. My choice was a simple one: face the swell or stay on land. I couldn’t face not diving, potentially for weeks, maybe even months.

With our five-metre, bright orange twin sea kayak hanging out the back of the van, we headed for the beach early. Waterside, we started to figure out the most effective ways of attaching fins, wetsuits, food, water, camera gear, weight belts, phones, and so on, to the kayak. We also set it up in such a way that if we happened to stumble across something interesting on our journey there or back, we could quickly reach for our cameras and be in the water straightaway.

I imagined diving it alone. It was a once-in-a-lifetime opportunity. I had to get out there. 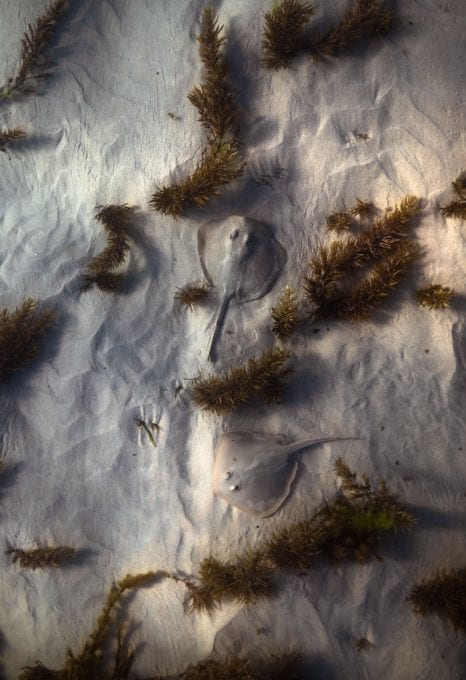 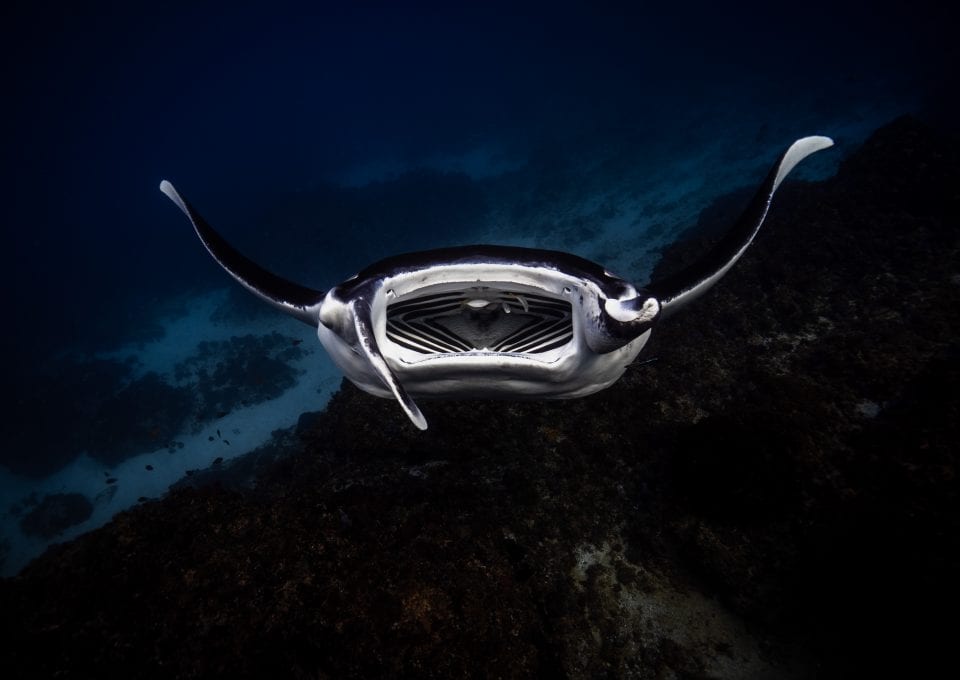 That logistical setup proved to be the easy part. Standing waist-deep in the water holding the double kayak by my side, looking ahead at the swell, I thought about the power of those waves, my camera equipment and the sandy seabed beneath my feet…

Once out to sea, we found a rhythm. After an hour, and with two burning arms apiece, we arrive at the Rocks, proudly jutting from the sea’s surface. To our surprise and consternation we were not alone. There was a small boat at the site, fishing. Julian Rocks is a protected marine sanctuary, so Roger and I quickly made our presence known. The boat quickly left.

We were alone, the only people at Julian Rocks.

Freediving the site by ourselves was amazing. Despite being very familiar with the area, I’d never seen it like this before. The marine life was calm and approachable. Inquisitive green turtles came to within just a few inches, presenting us with their barnacle-riddled shells as if asking us to clean them. Schools of fish allowed us to get so close they clouded your peripheral vision, eagle rays lolloped about rather than darted off, and the golden leopard sharks cruised past without a care in the world.

The visual aesthetics were also different. My dive boat visits were formulaic in their timing, the site always flooded in bright light. It wasn’t something I was even aware of, until now, but I realised, with a satisfying clarity, that the repetitiveness of my prior visits was heavily impacting the style of imagery I was producing. I was now seeing the rock with new eyes.

Over the coming weeks, Roger and I visited Julian Rocks frequently, sometimes in the early morning, sometimes in the late afternoon. The photography conditions varied enormously. It was exciting and liberating. At sunset, warm orange sunrays burst through the surface, subject backgrounds darkened as colour tones grew richer. Golden hour underwater.

Inquisitive green turtles came to within just a few inches, presenting us with their barnacle-riddled shells as if asking us to clean them. 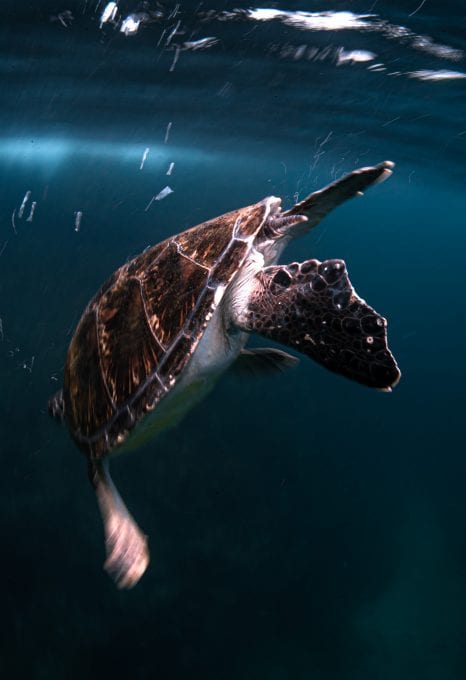 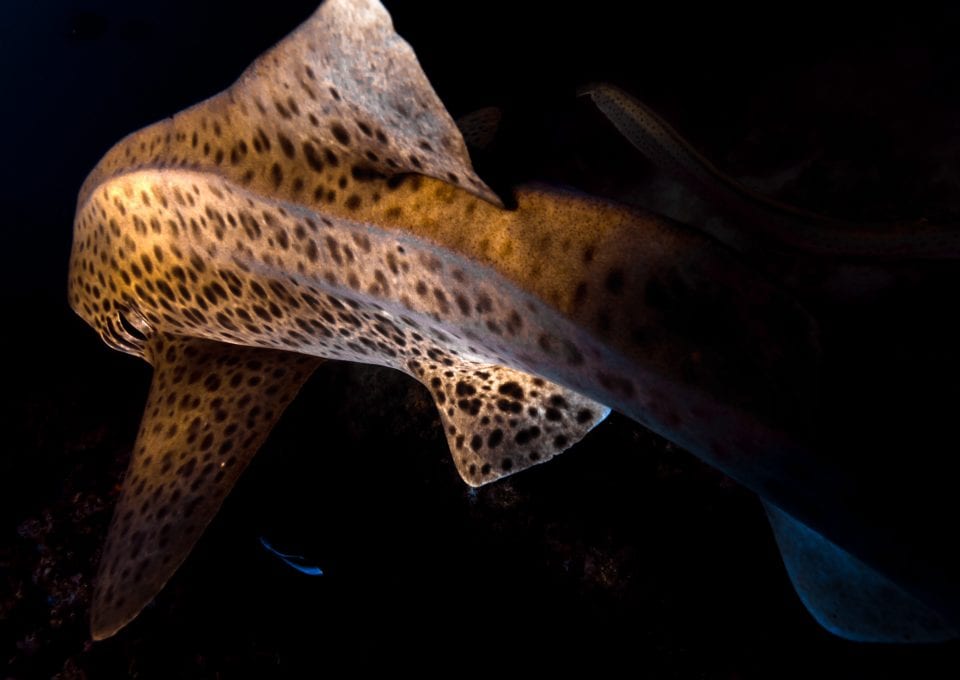 I started working on putting creativity back into my photography.

The cumulative effect of those quiet and creative visits was photographic freedom. The freshness of it all provided the catalysis I needed to break out of the artistic rut I didn’t even realise I was in – I had been shooting the same marine life at Julian Rocks for years, at similar times. Having the opportunity to enjoy the Rocks on our own, along with golden hour light that I had never worked with before, was a gift.

Energised, I started working on putting creativity back into my photography and focused on exploring new approaches to my work. I began capturing slow exposures with marine life that was now moving much slower than usual. I allowed wildlife to get so close it filled an entire frame. I started focusing on unusual parts of a creature’s body, such as the back fins of turtles, or the side of a shark’s dorsal fin. I would look for ways to capture the beauty of the ‘mundane’ wildlife, creatures I normally wouldn’t look twice at. I sought to capture entire underwater landscapes, wildlife just a part of the scenery, rather than a subject.

While the pandemic has had a crippling impact on our town, I am thankful for the small slice of happiness, distraction and learning a quiet Julian Rocks has provided me. It was a time I will never forget and one that has taught me to be braver photographically. To experience somewhere so familiar in such a new way was illuminating. I’m grateful for that.

I started working on putting creativity back into my photography.