The residents of Manta Bay

The residents of Manta Bay

The Nusa islands of Penida, Lembongan and Ceningan that lie off the east coast of Bali hold many wonders for ocean lovers.

Passing by the soaring cliffs of Nusa Penida on my way out to dive Manta Point always make me think of the opening scene in Jurassic Park. I can almost hear the Pterodactyls swooping by as the wind blows on my face and the smell of the salt spray fills my nose. The high limestone cliffs have been shaped by years of erosion and tower tall above us. Below, large swell hits the rocks where small unreachable beaches and rock pools have been formed over the years. On the southern tip of Penida lies a dive site we call Manta Point. Here you will see not Pterodactyls, but Mantas flying. Heading out to Nusa Penida always fills me with excitement as it’s one of my favourite places to dive – you never know what you might find.

There are several sites in Nusa Penida where you can be lucky and encounter some of our majestic friends, the manta rays. The most popular sites are Manta Bay and Manta Point where your chance to see mantas feeding or cleaning are quite high. Visitors travel from all over to dive and snorkel here. I’m very lucky because they share my office. Despite diving with them countless times, any manta encounter is always a thrill. My experiences here have not only been some of the most magical, but also some of the most important moments of my life. Moments that you can look back on and think, this is what life is all about.

I have been living in Nusa Lembongan for nearly three years now. In my time here I have been working as a dive instructor and underwater photographer. My passion for the ocean and for marine conservation eventually lead me to get involved with Marine Megafauna Foundation (MMF). The work of MMF here in the Nusa islands has been to monitor the local manta ray population. As you may know, manta rays can easily be tracked and ID’d using the spot patterns on their belly. This essentially is like a fingerprint which can be useful for non-invasive tracking of individual manta rays. A manta catalogue has been created here with photos of each individual manta ray uploaded into a database. Currently, there are 691 mantas in the Nusa Penida database. During my dives here, I help out by taking photos of the manta rays and making note of other data that they use in their research. The ability to track manta ray movement and behaviour allows us an in-depth look into what our local mantas are up to. This information even led to the blanket protection of mantas in Indonesia in 2014, a huge win for manta ray conservationists.

Despite diving with them countless times, any manta encounter is always a thrill. 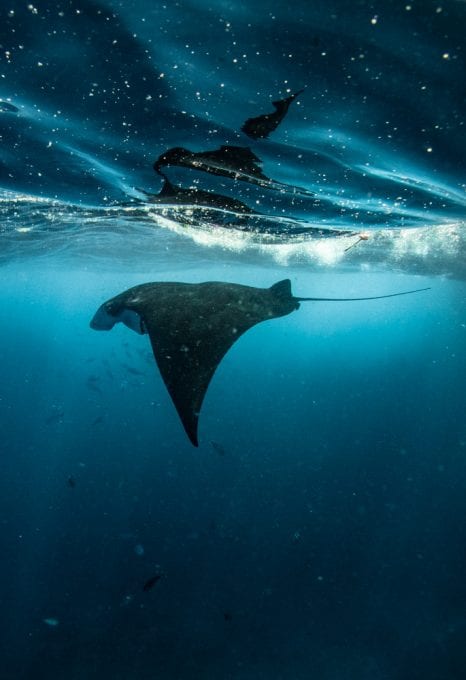 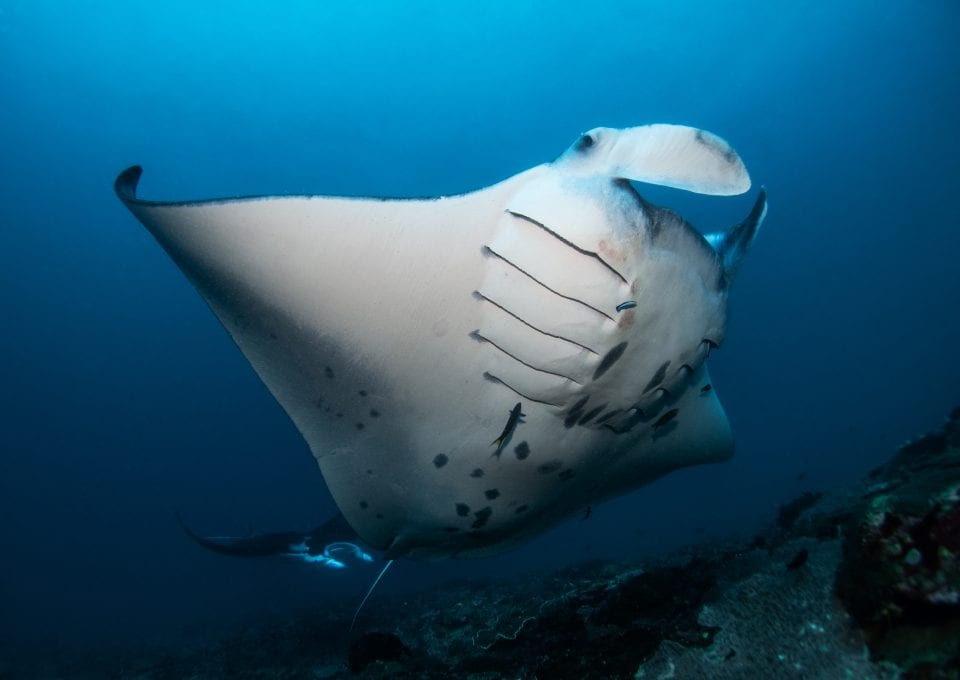 Collecting data for MMF research has been an eye-opening experience. Spending time with researchers and helping out where I can has taught me so much. I’ve learnt a lot from the mantas too, simply by observing them, videoing them and taking photos. Many of them I’m now familiar with and know them by name. I have now captured hundreds of manta ID’s, and their spot patterns really do start to stand out. Often I’ll see one swim by and think “oh, that’s Cauliflower” who at one time was heavily pregnant, but the next time I saw her she had given birth.Looking into the eye of an intelligent fish, a curious one that looks right back at you, can be a little bit of pure ocean magic. Mantas have the biggest brain to body ratio of any fish and exhibit complex social behaviours, which become obvious if you watch closely.

One day, I was out at Manta Point where I was teaching an open water course. My student and I came across two large female mantas cruising along in the shallows. They began to circle us slowly, examining us curiously. We both stayed very calm and still, and we watched their eyes staring straight at us. This went on for a few minutes and then they continued on their way. My student after surfacing was in tears of joy! 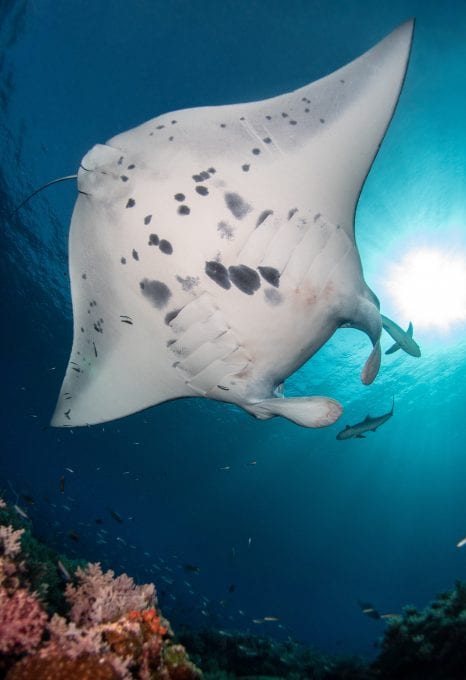 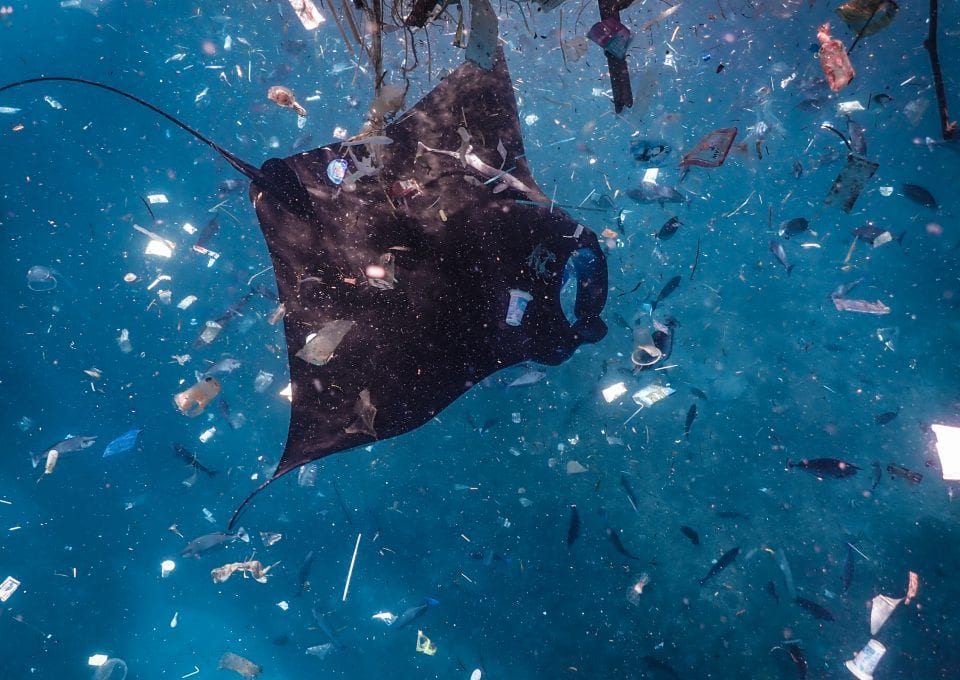 With time, plastics break down into smaller pieces called microplastics that large filter feeders might accidentally scoop up because they float among their prey.

Being here over several years has given me both incredibly beautiful and memorable moments in the ocean, but also some heartbreaking ones too. My more troubling experiences began at the end of my first wet season here. If you have ever lived in the tropics you will know that the rains can be heavy, and the streets quickly flood. Across Indonesia there are huge issues to do with plastic waste. The rivers, streets and roads are heavily polluted. After a heavy rain fall much of it ends up washed out to sea. This has become a very important issue with regard to manta ray conservation. One of my friends and I were out diving in Manta Bay, a dive site where many of the juvenile manta rays can be seen surface feeding. That day the wind and currents had swept in a mass of trash into the bay. There were about five manta rays feeding amongst the plastic and waste. Mantas eat zooplankton which is filtered through their giant mouths from the water column. It’s estimated they can filter up to 90m3 of water per hour. You can just imagine what kind of things they were ingesting on that day. Since then I have now witnessed and documented many more of these ‘plastic soup’ days. People across the world are still so unaware of the severity of this issue. So I’m on a mission to document these problems as I see them in a small hope this message can be shared, and some day one of my favourite animals will be safe.

Another big part of MMF’s research here is on marine debris. Elitza Germanov is the lead researcher on Lembongan and has just completed her PhD studies on the effects of microplastics on marine megafauna. She says: “With time, plastics break down into smaller pieces called microplastics that large filter feeders might accidentally scoop up because they float among their prey”.

Her studies suggest that manta rays may ingest up to 63 pieces of plastic per hour feeding in Nusa Penida. Part of our (not so glamorous) data collection on our dives also included trying to capture samples of manta faeces and vomit. After the testing of these samples it was found that they were positive for plastics.

In a changing world it can be so hard to stay positive when there are so many things going wrong. I hope we can all make some small changes in our lives – when we all work together, these can lead to bigger changes. In my moments of doubt I always think of this wonderful quote by Jane Goodall. “You cannot get through a single day without having an impact on the world around you. What you do makes a difference, and you have to decide what kind of difference you want to make”.

With time, plastics break down into smaller pieces called microplastics that large filter feeders might accidentally scoop up because they float among their prey.