Manta rays of the North

Manta rays of the North

In 2021, Ulster Wildlife’s Sea Deep project recorded the first juvenile flapper skate in Northern Ireland; an exciting discovery that might suggest that flapper skates breed in the area. We caught up with project officer Erin McKeown to talk about how flapper skate conservation can benefit from angling and what the sighting could mean for conservation efforts.

Often referred to as the ‘manta ray of the North’, the largest skate in the world can attain lengths of up to 3m. Just like with so many species in the oceans today, flapper skates are critically endangered following decades of overfishing. In Northern Ireland, however, an exciting discovery made the headlines in 2021: an extremely rare juvenile flapper skate was recorded by Ulster Wildlife’s Sea Deep project.

Erin McKeown (EM): Flapper skates are really impressive. At Sea Deep we fondly refer to flapper skates as the ‘manta rays of the North’ as it is an equally iconic species. It is the largest skate in the world, reaching 3m in length. It can live to a phenomenal 100 years of age. Unfortunately, the flapper skate is listed as critically endangered on the IUCN red list, with further declines risking species extinction.

OM: How did the species end up being classified as ‘critically endangered’?

EM: The flapper skate was historically overfished, both commercially and recreationally. In fact, species was the first clear case of a fish brought to the brink of extinction by overfishing, according to Brander, 1981. It was a popular sport fish due to its size. Before 1970 angling for most shark and skate species followed a ‘catch and kill’ procedure. This overwhelming fishing pressure resulted in drastic species declines. Additionally, the flapper skate like many other sharks and skates, displays slow life history characteristics, such as late maturity and small litter sizes. Therefore, it can take a long time for populations to recover if decimated. These factors, alongside several other threats in our modern-day seas result in the flapper skate requiring urgent protection to conserve the species.

OM: How exactly did you record the juvenile flapper skate last year?

EM: Sea Deep is supported by a community of Northern Ireland based volunteer anglers. We train them in best practice ‘shark & skate catch, tag and release’ techniques, so they can effectively gather data on local species when at sea. Our juvenile flapper skate was recorded in April 2021, off the east coast of Northern Ireland and was a first for the project. The juvenile was caught by a licensed Sea Deep angler, authorised to collect data on this critically endangered species under the NI wildlife order (1985). We did not tag this catch in order to minimise stress because juveniles are at a more vulnerable life stage. Instead, we recorded other information, such as location, sex and general species health.

Before 1970 angling for most shark and skate species followed a ‘catch and kill’ procedure. 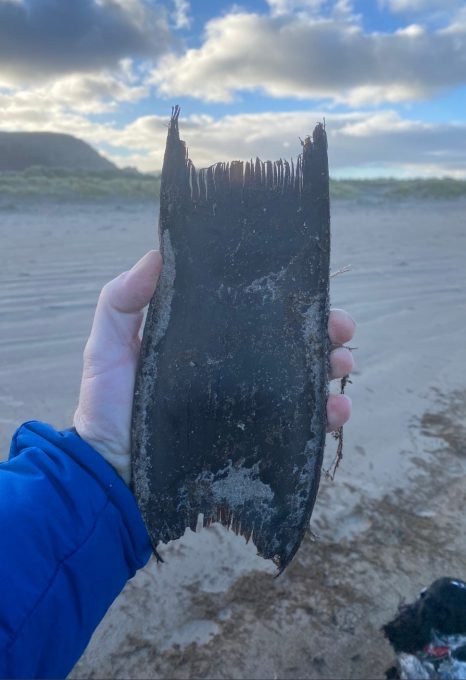 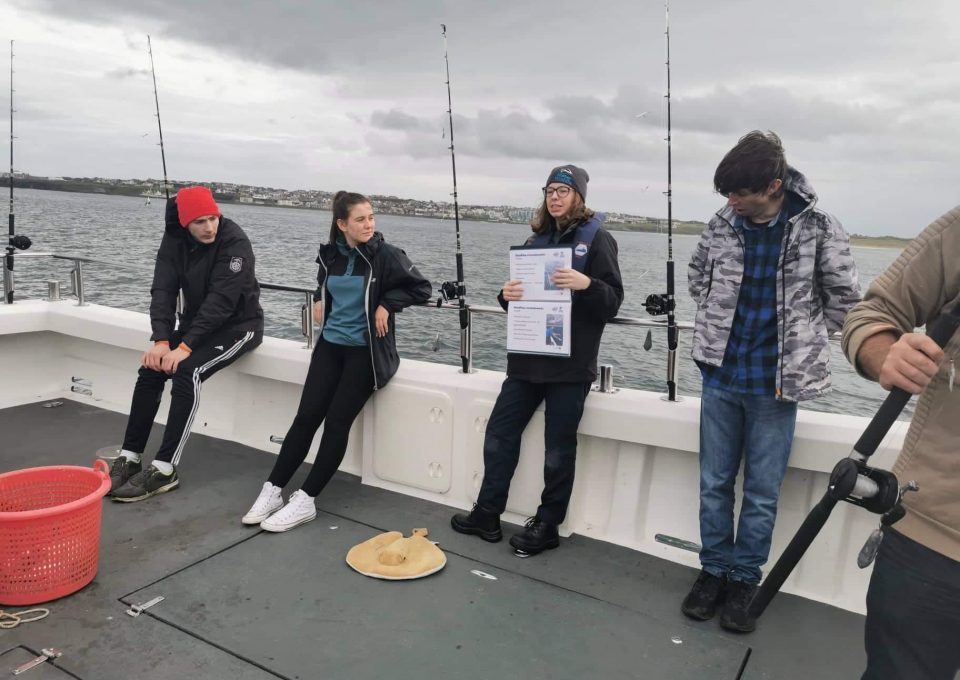 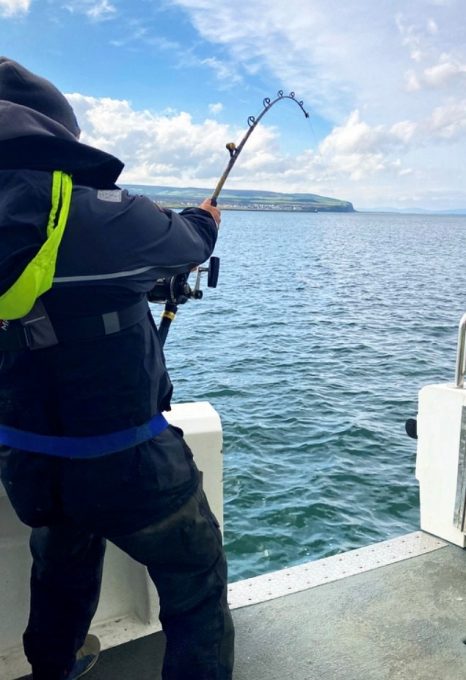 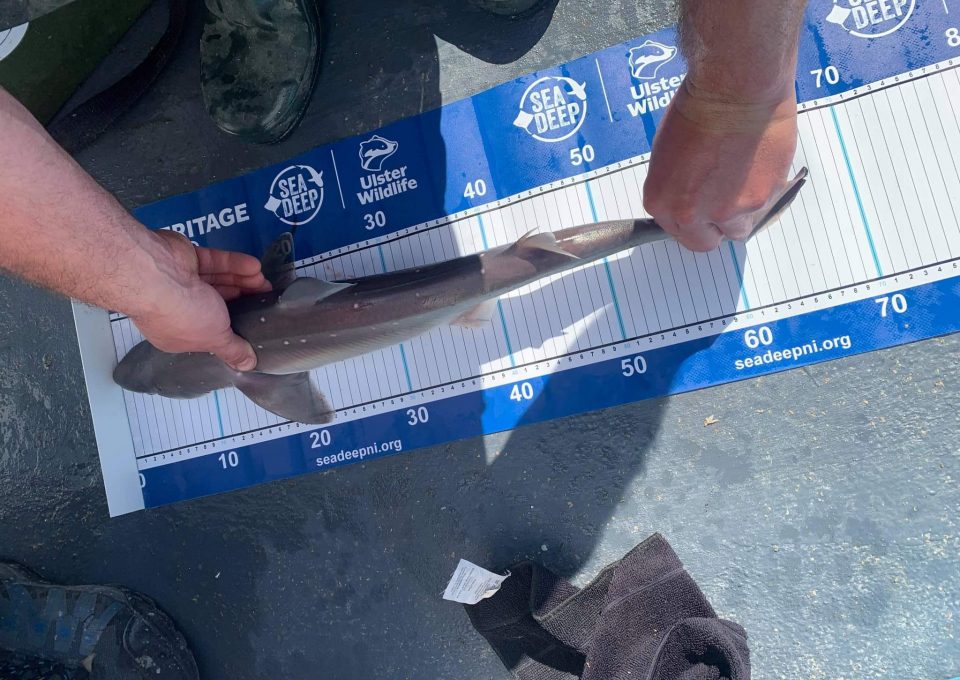 OM: Do you suspect the area could be a breeding ground? What indicators are found in the area for this?

EM: By recording data on local sharks and skates we are gradually beginning to understand more about what species we have and how they are using our local waters. The flapper skate is a mobile species so our juvenile catch cannot confirm that there is a nursery in the area. However, it does makes us aware of sites that require further monitoring to build a better picture of how the critically endangered flapper skate is using our local seas. For example, if an increased number of juvenile flapper skates are recorded within this region, that would indicate that this is an area of high importance to the species. Other important indicators could include an increase in flapper skate egg cases washed up on the nearby shoreline. Sea Deep recorded our second flapper skate egg case in late November of 2021, along the north coast of Northern Ireland. Further monitoring will be needed in both these sites to understand more but these finds are still very exciting. They definitely show that some flapper skate activity is occurring off the coast of Northern Ireland.

OM: How does the angler tag and release project come into play here? How does it help with conservation of the species?

EM: Sea Deep has been training anglers in best practice ‘shark & skate catch, tag and release’ techniques since the project began in 2018. We currently have over 80 sea users trained, resulting in more individuals tagging local sharks and skates than ever before in Northern Irish waters. Tagging local sharks and skates provides us with a wealth of knowledge on these species. We can find out what species we have in our seas, where they’re present and at what time of year they can be found. With more of this information we can then work towards impactful conservation measures that will safeguard local species into the future. These discoveries wouldn’t be possible without our volunteer anglers and the tagging programme throughout Northern Ireland. Anglers play a really important role as they have unique expertise, resources and historical knowledge of our seas that support the Sea Deep tagging programme. They have also displayed a real enthusiasm for shark conservation, with some even establishing the first Northern Ireland wide angling club dedicated to conservation, entitled the ‘Belfast Lough angling and conservation club’. All of these members are encouraged to partake in Sea Deep training.

OM: What exactly does the Sea Deep project entail?

EM: Sea Deep is Ulster Wildlife’s shark conservation project. Ulster Wildlife is the largest local nature conservation charity in Northern Ireland, working for 40 years to protect local wildlife and wild places. This sentiment is reflected in the work Sea Deep is carrying out. The project supports volunteers in gathering information about local sharks and skates so we can conserve them in our waters. We work with Northern Ireland’s angling community to tag species at sea, whilst also engaging the general public in shark conservation work through shore-based egg case surveys. By gathering shark and skate egg cases, commonly referred to as ‘mermaid’s purses’, we can gain an insight into the potential location of breeding grounds whilst also promoting our incredible local species. We then analysis all our data and work alongside groups like volunteer dive club SeaSearch NI, to survey underwater areas that may be a potential hotspot for elasmobranchs. In addition to this, at Sea Deep we have engaged the general public with local sharks, skates and rays. We’ve worked to dispel common misconceptions that sharks are simply man-eating, scary animals and instead highlighted the value of sharks for healthy seas and the urgent need to protect them locally.

They definitely show that some flapper skate activity is occurring off the coast of Northern Ireland. 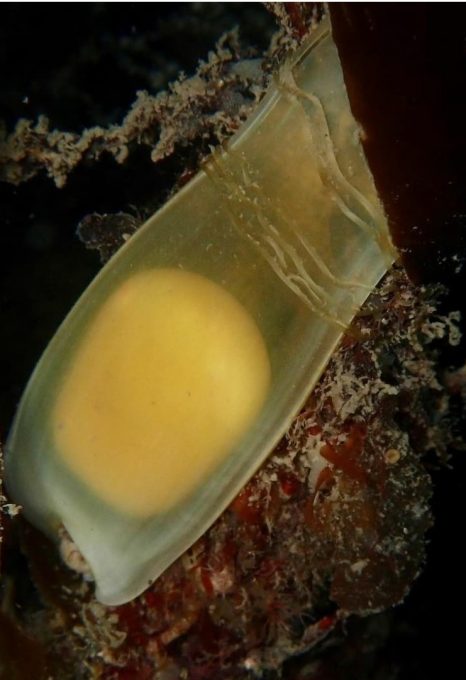 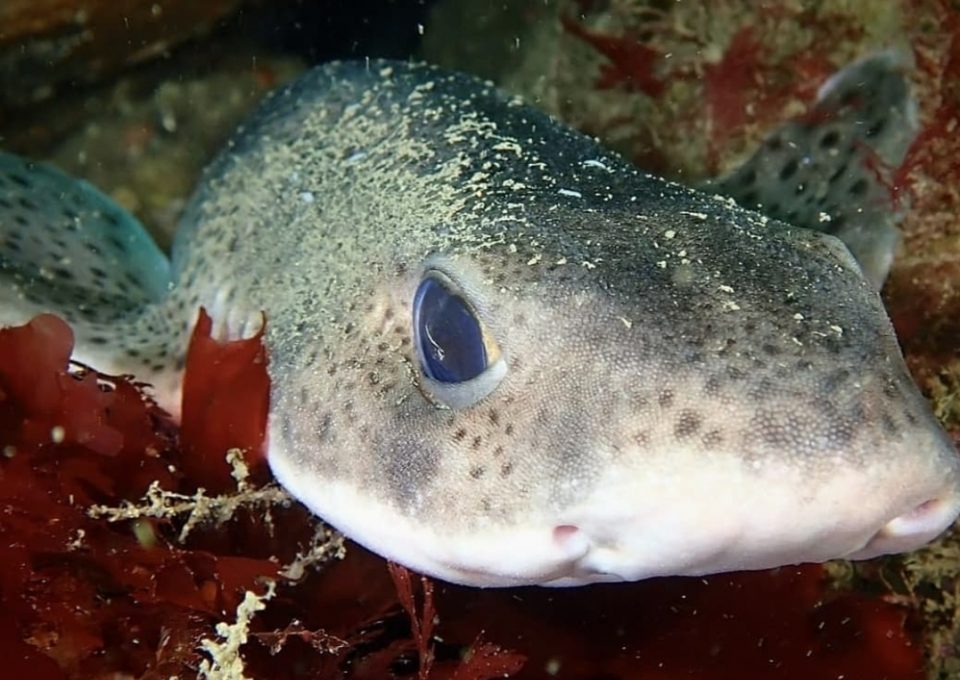 This growing fondness will ensure the people of Northern Ireland act as guardians of our local seas.

OM: What are your hopes for the project?

EM: Due to its critically endangered status, the flapper skate is a species of conservation priority for the Sea Deep project. We hope to continue monitoring this species in our local waters to identify areas of importance, such as feeding or nursery grounds. If an important site is discovered, Sea Deep will then advocate for spatial protection through the designation of a marine protected area, offering the flapper skate a fighting chance at flourishing in our local seas once more. Currently only one MPA in the world is designated for the flapper skate, Scotland’s Loch Sunart to the Sound of Jura Nature Conservation MPA. A second MPA in NI waters would provide refuge for individuals showing site fidelity whilst also offering protection for mobile flapper skate travelling throughout Scottish, Northern Irish and Irish waters, providing a network that will safeguard this critically endangered species. We hope from Sea Deep’s work there will be a lasting legacy of renewed appreciation for all our local sharks and skates within angling, coastal communities and the general public. This growing fondness will ensure the people of Northern Ireland act as guardians of our local seas, working to ensure the conservation of local sharks and skates into the future.

OM: What data were you able to collect so far?

EM: Sea Deep has collected a momentous amount of data since the project began. Our volunteer anglers have tagged over 600 fish, including 120 critically endangered flapper skates. Analysis of our flapper skate data has resulted in a site of search for the species being identified off the East coast of Northern Ireland. Over 2,000 shark and skate egg cases have also been submitted to the project. This data is a result of incredible efforts from the general public and has allowed Sea Deep to build a picture of what species live in our local waters. These finds include two flapper skate egg cases, contributing to our understanding of how this species is using our coastal waters. Sea Deep has undeniably increased data available on local sharks and skate in NI in comparison to pre-project records, giving us useful insights into these highly elusive species in our seas.

OM: What are the prospects of the Sea Deep project for 2022? What else is planned?

EM: The project is currently training some of our most dedicated anglers to deliver Sea Deeps best practice ‘catch, tag and release’ tagging training. In doing so, we’re ensuring the growth of conservation minded anglers fishing in NI waters and preserving our sea deep community for future generations. We also have many exciting events planned for 2022. Sea Deep will be hosting egg case hunts and flapper skate celebration days as part in NI Science Fest 2022, as well as many more outdoor events and talks to come.

This growing fondness will ensure the people of Northern Ireland act as guardians of our local seas.