New York City has a rich heritage of maritime history.

Like coastal waters around the world, New York’s marine habitat has been exploited for centuries. Until recently, its fisheries were exhausted and the resident marine life populations were greatly depleted. However, in recent years, the state of the waters in and around the New York Harbor and Hudson River has been improved, thanks to the hard work of various citizens, activists, campaigners and environmental groups. As a result, the biological food chain has bounced back, and now supports a diverse ecosystem teeming with marine life. The waters of New York now provide a feeding ground for seals, dolphins and whales.

New York has the busiest port on the eastern seaboard. This puts whales in a high traffic area and subject to potential ship strike and entanglements. Concern for boat traffic is critical, but the reason for the whale’s return is a good news story. The waters have been cleaned up, the environment provides a food source (plankton) for the fish, and the fish, predominantly menhaden, are the prey species for the whales. A recent cap on the commercial fishing for menhaden has been reduced in recent years and has allowed the species to rebound. We need to keep that in place.

I founded Gotham Whale in 2011, after retiring from a career in the public aquarium world both in Boston and New York. I had had numerous experiences of responding to stranded whales as a curator at both the New England Aquarium and the New York Aquarium, and I always had a fascination with the species and their natural history. Being at the forefront of such a major change – making NYC a new feeding ground for humpback whales – is exciting and challenging. Our boat captain likes to say: “Rockaway, the new Cape Cod”. Who would have thought of NYC as a whale watching hot spot? My hope is that we can go from a merry band of volunteers, to become a self-sustaining organisation that can be a positive influence for the whales and marine mammals of NYC.

Concern for boat traffic is critical, but the reason for the whale’s return is a good news story. 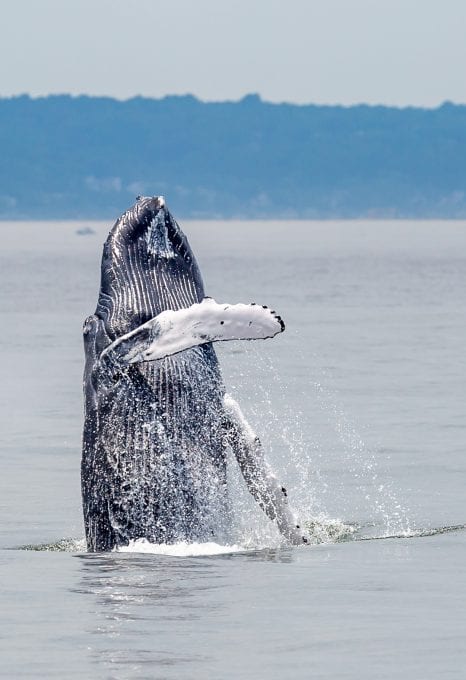 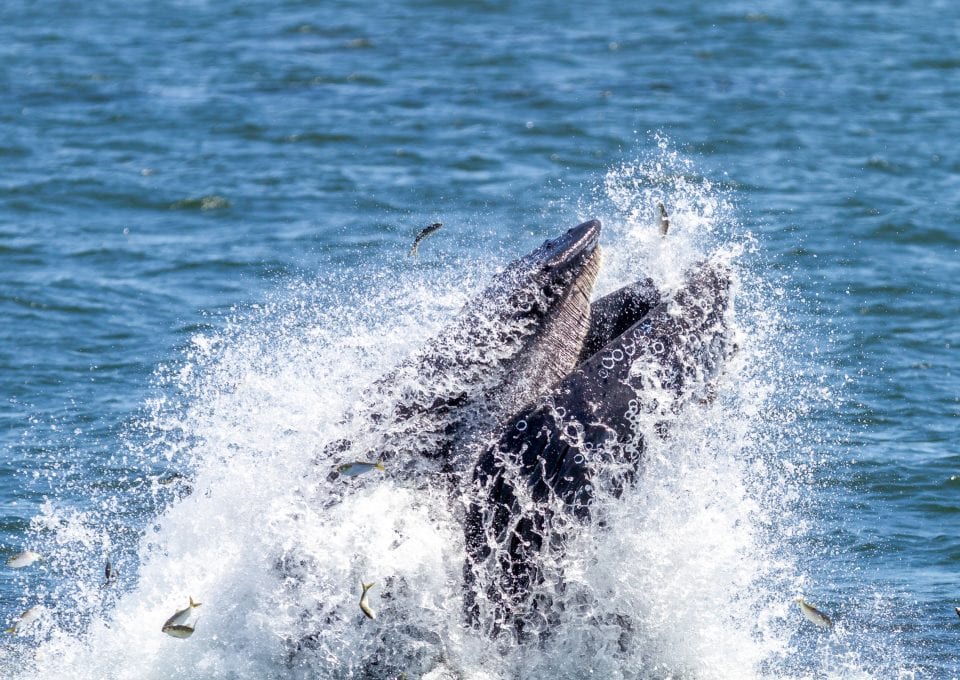 Each year the number of whales coming to the waters around New York has increased. Our counts have increased a hundred-fold since 2011. Many variables make that number imprecise, but the magnitude is astounding. Prior to 10 years ago, it was only an occasional whale that wandered through the waters around NYC. Now they come here to eat regularly. Our goal with Gotham Whale is to study, advocate for, and educate about the whales and marine mammals of New York City, using citizen science from a plethora of volunteers. Our involvement in each area is growing, but the underlining basis, is data collection. That is the ‘currency’ from which our other activities gain creditability and authority.

Since we began our study in 2011, we have recorded almost exclusively humpback whales. The same is true for the dolphin species we see, bottlenose dolphin. Harbour seals are the dominant species now, but we expect the grey seal population to grow over time. The few other species of whales are minke and fin on occasion. Common dolphin also are occasional visitors.

Our main conservation work is to support other larger environmental organisations by adding ‘the voice of the whale’ to their efforts. These include opposing offshore gas and oil exploration, pipelines through feeding areas, and in particular, we oppose the industrialised menhaden purse seine boats that fish in areas where we know whales feed.

Currently, we are looking at what our collected data means. Clearly, the numbers are increasing, we are charting the locations of highest density and the seasonality. All will give a picture of where and when the whales are likely to be. We are finding that, as is to be expected, the whales occur where the fish are. Our researchers are working to get these findings published. Often the public does not realise that unless information has been published in a peer reviewed report or journal it does not exist for decision makers. ‘The best available science’ is required for what determines legislation and regulation. We are working to present our findings so that they can be used for science and conservation.

Prior to 10 years ago, it was only an occasional whale that wandered through the waters around NYC. 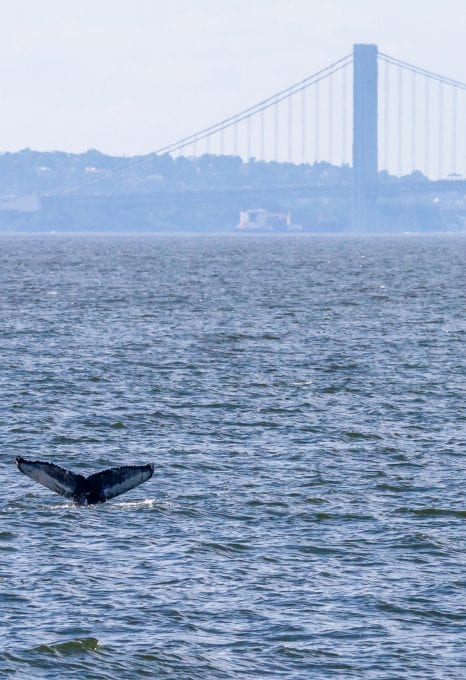 Every entry helps us to build a clearer picture of where and when marine mammals are sighted in the waters of New York.

We ask regular citizens with eyes on the water – fishermen, boaters and even beach walkers, to report marine mammals when they encounter a sighting. We ask for the citizen to give their contact info, the date and time of the sighting, how many animals, latitude and longitude, and any note of the behaviour. Most importantly, we ask for a photo to document the sighting which allows our biologists to verify the species. All these data are easily acquired and transmitted via a smart phone. Every entry helps us to build a clearer picture of where and when marine mammals are sighted in the waters of New York.

One observation we have gathered from this process is that the whales of NY seem to be juveniles. They are not as large as those seen off Massachusetts and Maine. We have not deduced a reason as yet, but it’s a consistent observation.

I am hopeful that the whales of New York and the vast human population can live harmoniously. Wildlife is encroaching on areas that have been completely dominated for human use in the past. Can we work out behaviour that is mutually beneficial? I certainly hope so.

The story of whales in New York is one of hope. The environmental work that began in the 1970’s has brought us to the point where the Hudson River discharges nutrients, rather than pollution. Legislation protects the wildlife and the environment. The abundance of fish species, in particular, menhaden, attract the marine mammals. We need to keep the positive trend in place and each new whale that comes to NYC proves that it can be done.

Every entry helps us to build a clearer picture of where and when marine mammals are sighted in the waters of New York.