…but not as we know it. Scientists studying the daily movements of marine zooplankton have uncovered their incredible ability to detect light hundreds of metres below the ocean surface. The findings give insight into how marine creatures perceive the world.

The next time you’re stuck in traffic, your train runs late, or your bicycle gets a puncture on your way to work, spare a thought for our ocean’s zooplankton, which have the hardest daily commute of all.

Zooplankton, which form a crucial part of the ocean food web, and range from millimetres to just a few centimetres, make daily vertical migrations up to a few hundred metres in the water column. Sheltering in the safety of the deep ocean during the day, these small animals migrate upwards to feed near the surface at night, using the cover of darkness to reduce the risk of being eaten themselves, before once again swimming to the deep. Such vertical migrations through the water column, in response to the changing light, are a mammoth challenge – if you compare body lengths, it’s the equivalent of humans completing two ultra-marathons a day.

But even more fascinating is how zooplankton ‘see’ this underwater light at depth, especially at the poles when they have light all summer and darkness all winter. 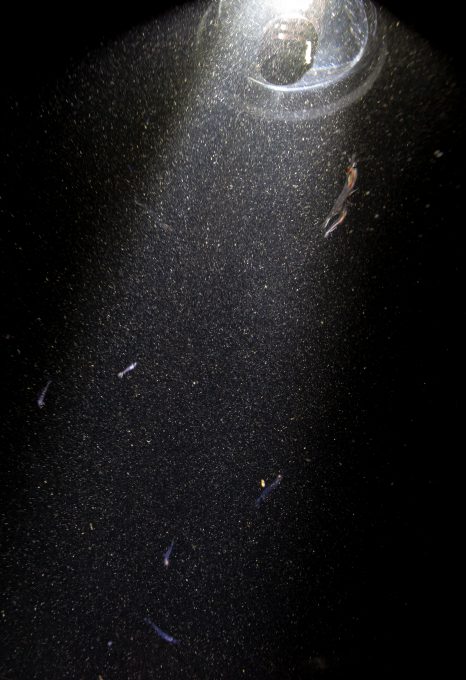 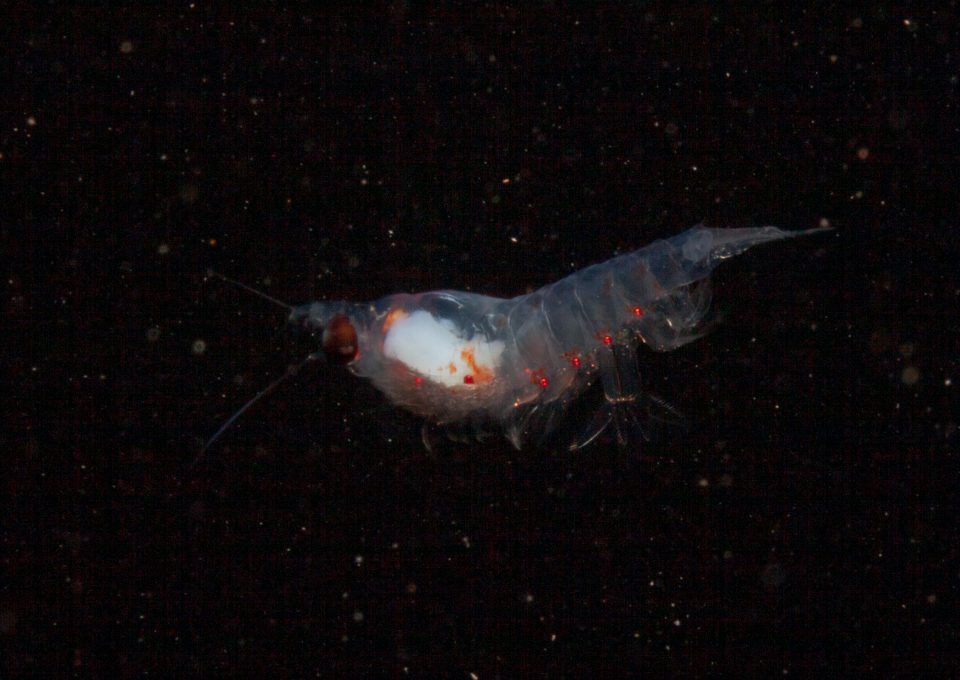 An international team of researchers from the Scottish Association for Marine Science, University of Vienna, University of Strathclyde and the University of Delaware conducted fieldwork in north-west Svalbard – 79 degrees north – to understand how zooplankton see light in the underwater world.

They have uncovered an incredible ability to detect light; but not as we humans know it. The team found that although the zooplankton migrate along similar intensities of light, they actually experience very different colour spectrums on this daily journey. Different colours of light penetrate the ocean at varying depths, quite possibly allowing the zooplankton to detect the most subtle of changes and informing their ‘body clocks’ accordingly.

The findings, published in Communications Biology give insight into how marine creatures perceive the world. SAMS marine ecologist Dr Kim Last said: “It is quite remarkable how little light is required to drive these zooplankton migrations into an undersea world dominated by vastly different spectrums of colours than at the surface.

“The zooplankton are dominated by copepods and krill which possess circadian biological clocks informing them of the time of day. It is revealing that in the depths of the ocean these clocks are probably ‘set’ by much lower light levels, and with a kaleidoscope of different colours, than we had anticipated.”

The research team conducted fieldwork in an Arctic fjord in springtime 2018. Using data from the Norwegian Research Council’s land-based ArcLight Observatory and underwater acoustic sensors, they were able to track the so-called ‘diel vertical migration’ of the zooplankton in the water column and compared this to the available light in the water.

Zooplankton were found to undertake daily migrations to the very bottom of the fjord. But even by the point they reached 120 metres, the animals would have experienced nearly four orders of magnitude change in light levels (i.e. 10,000 times darker than at the surface).

Whilst near the surface they would have seen the full spectrum of light colours, but at the migration depths their world would have been predominantly blue. Dr Kim Last thinks there may be some fundamental mechanisms which are adapted to this low blue light dominated world.

“We know that krill and copepods possess circadian biological clocks much like the one which tells you to wake up in the morning or gets desynchronised when we fly across time zones, a condition we all know as jetlag. These clocks are particularly sensitive to blue light which is detected by pigments in the eyes (rhodopsins) and proteins (crytochromes) in precisely setting the clock.

“Since life evolved in the primeval ocean, we suspect that clocks adapted to the underwater world of light are still evident to this day.”

We know that krill and copepods possess circadian biological clocks much like the one which tells you to wake up in the morning. 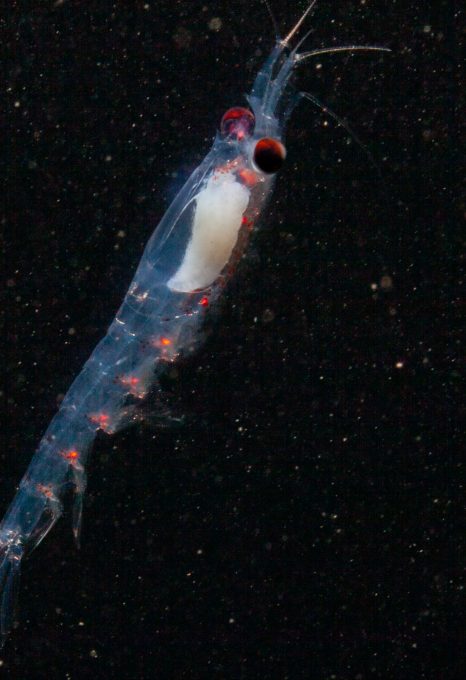 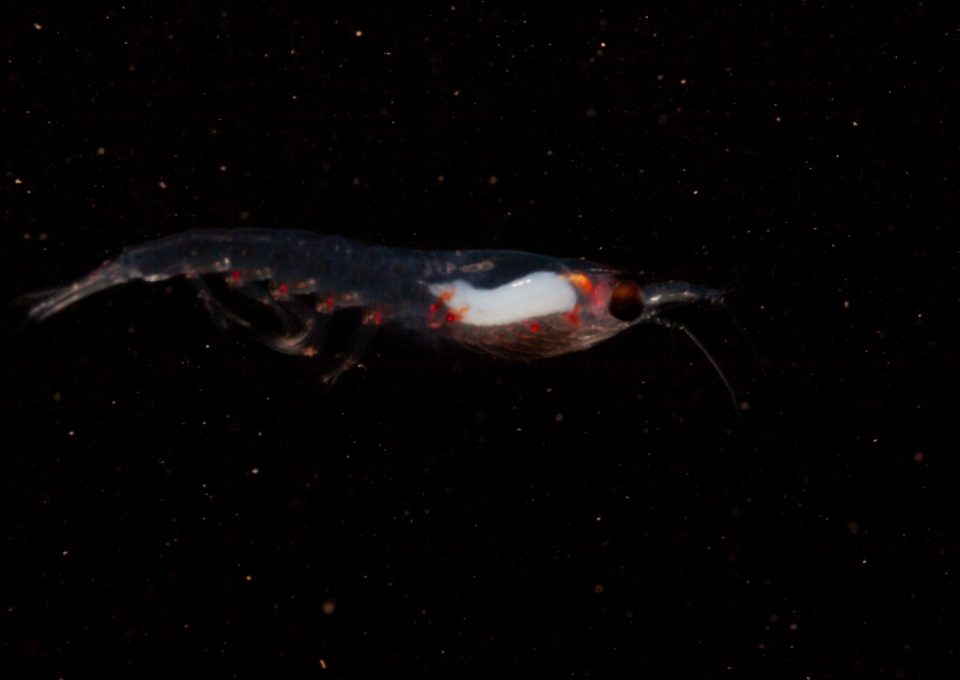 Their sensitivity to light and spectral changes must be extraordinarily high.

Dr Laura Hobbs of SAMS, a co-author on the paper, said: “Although the zooplankton experience a large range of light levels, this is still much less than if they were to remain in the same position or at the surface. In this case they would experience up to six orders of magnitude light change (i.e. a million fold). It is a bit like a nightshift worker who sleeps during the day, so is only ever exposed to a limited range of light levels.

“The study was conducted in the spring when there are normal day/night cycles, yet we see migrations pretty much all year. Considering the lack of light variation at the height of summer or depths of winter in these polar environments, we wonder: how do these organisms continue these extraordinary migrations? Their sensitivity to light and spectral changes must be extraordinarily high.”

The researchers suggest that such behaviourally modified daily light environments which they term the ‘realized diel light niche’ should be considered to create more realistic lab experiments. The findings are also particularly relevant to scientists studying the mechanisms and limits of how circadian biological clocks are set by light.

All krill images were taken by Dr Geir Johnsen, NTNU (Norwegian University of Science and Technology). The copepod image was taken by Kim Last, SAMS.

Their sensitivity to light and spectral changes must be extraordinarily high.

Photographs by The Scottish Association for Marine Science
Share