It is sometimes difficult to pinpoint the moment when a passion takes root in your soul.

For some, it creeps in softly, building over the years, while for others there is a lightning-strike moment when you just know that you have come across something that will change your life forever. For me, it was a bolt from the blue, the sighting of a whale off Provincetown, Massachusetts.

The naturalist on board a whale-watch vessel shouted, “whale at nine o’clock”, and I leaned over the port-side rail of the boat to see the dark, glistening head and back of a humpback break the surface of the water. The whale, a matriarch identified as Salt, exhaled, and I felt a cool mist blow over my face. I drew in a deep, wild, briny, wonderful breath, and embarked on a journey that has now spanned decades. I stood in awe watching Salt that day, and she inspired my work in the whale conservation movement, leading me to my current role as marine animal consultant for the Animal Welfare Institute.

Following decades of overexploitation, which saw more than two million whales killed and species after species of great whales brought to the brink, the International Whaling Commission (IWC) finally agreed in 1982 to a moratorium on whaling for commercial purposes, which took effect in 1986. Unfortunately, not all nations have respected the ban – notably Iceland, Japan and Norway. Since the moratorium began, these three nations have killed nearly 40,000 whales.

In fact, Norwegian whalers slaughtered more whales in 2020 than in each of the last three years, according to statistics released this month by the Fishermen’s Sales Organisation (Råfisklaget). So far this year, 492 minke whales have been killed — 63 more than last year — and the whaling season is still underway.

Despite the notoriety of both the Japanese and Icelandic whale hunts, it is the Norwegian whaling industry that continues to lead the world in commercial whaling. The invention of the harpoon cannon by Norwegian whaler Svend Foyn in the 19th century allowed the country’s whaling fleet to industrialise. By the late 1920s, Norway was the dominant force in global whaling, responsible for more than half of all whales killed and the leading producer of whale oil. A 1928 New York Times article acknowledged this, stating that “the centre of the world’s whaling interests… has shifted to Southern Norway”.

I drew in a deep, wild, briny, wonderful breath, and embarked on a journey that has now spanned decades. 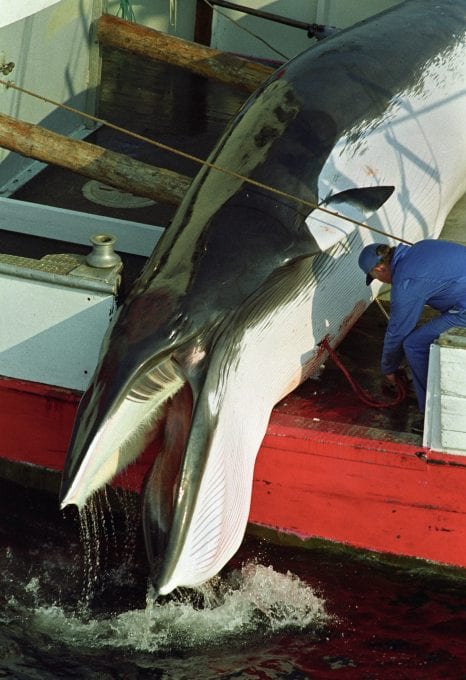 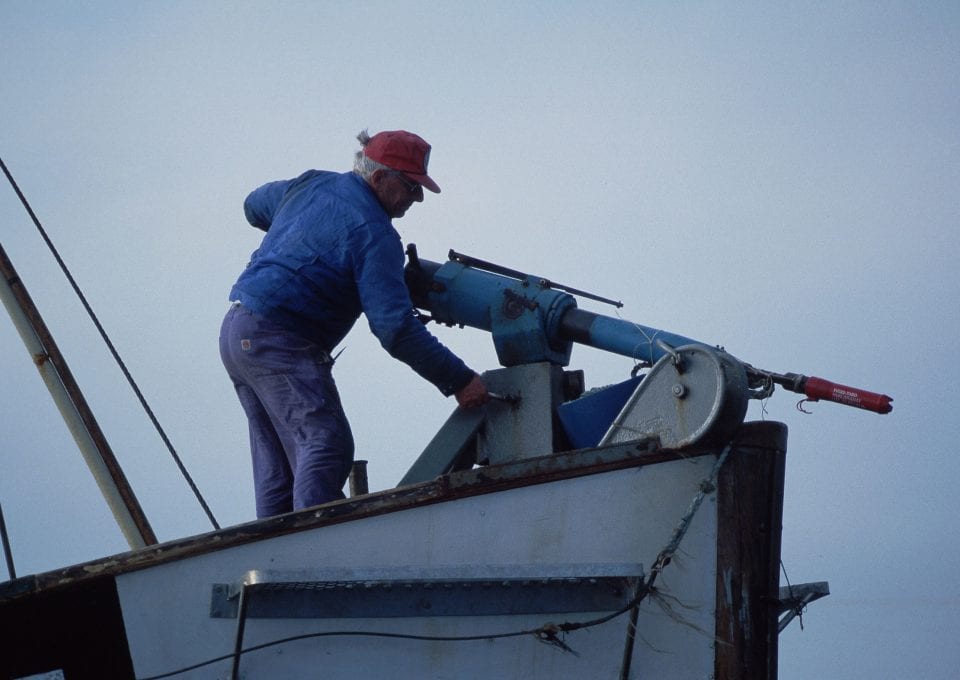 After the commercial whaling moratorium took effect in 1986, Norway initially engaged for the next six years in “scientific” whaling, taking a small number of whales ostensibly for scientific research. The country then resumed full-scale commercial whaling in 1993, using an objection to the moratorium that it had lodged with the IWC to exempt itself from the ban. The target of Norway’s hunt is the minke whale, the second smallest species of baleen whale. Minkes initially escaped rampant commercial whaling because they were considered too small to be profitable.

Female minke whales average about 8.5m in length and tend to be slightly larger than males. They reach reproduction age at 7-8 years, and their calves are believed to stay with them for the first 5-6 months of their lives. Little is known of the minkes’ Northern Hemisphere winter breeding and calving grounds. There is evidence, however, of sexual segregation during summer months in the Northern Hemisphere, with females tending to congregate at higher latitudes than males.

It is this segregation that has led to one of the more disturbing aspects of the Norwegian whale hunt. Norway has killed more than 9,000 female minkes since 1993; approximately 42% of these whales were pregnant. A 2019 study by Norwegian scientists noted with concern that these heavily sex-biased removals have negative consequences for minkes, as both genetic diversity and population growth rates may be much lower in a population that skews heavily towards males.

The Norwegian whaling industry portrays itself as an environmentally friendly industry, yet it is incredibly wasteful. Blubber, meat and bones are often dumped at sea. According to a 2015 article in the Norwegian newspaper Nordlys, as communities in northern Norway protested the dumping of whale remains, one local stated: “I found stinking whale stomachs, blubber and intestines floating in the fjord and stuck on land.” The captain of the Reinebuen vessel (pictured in the title photograph) who had been hunting in the area admitted in an interview that this was a common practice.

One possible reason for the dumping is that whalers focus on only the leanest cuts of whale meat to try to entice potential consumers and boost sales, given that consumption of whale meat has been steadily declining in Norway for the last two decades. A 2019 survey of 1,071 adults found that most Norwegians have little interest in eating whale meat, with only 4% of those polled stating they eat whale meat often. Two-thirds of respondents either never ate whale meat or only did so a long time ago.

The target of Norway’s hunt is the minke whale, the second smallest species of baleen whale.

For decades, Norwegian whalers have benefitted from government programs such as fuel subsidies. In addition, state funds have propped up the industry with marketing campaigns encouraging Norwegians to eat whale meat and promoting whale meat to tourists. The government has funded research into alternative uses for whale meat and blubber, including their use in nutraceutical supplements for humans.

The Norwegian whaling industry provides relatively few jobs and represents an infinitesimal percentage of the national economy. Many of the whaling vessels operating today also engage in fishing, holding quotas for species such as cod, haddock and herring. Whaling and fishing have been linked for centuries, sharing common ports, vessels and processing infrastructure. In Norway, there are a number of companies that process and sell whale meat alongside other seafood products, and they can easily transition to dealing only in fish.

Similar to Norway’s objection to the whaling ban, the country also claims a reservation to the ban on international trade in whale products imposed by the Convention on International Trade in Endangered Species of Wild Fauna and Flora (CITES). One Norwegian company, Myklebust Hvalprodukter, has taken full advantage of this reservation. The company has been relatively successful in finding a market in Japan, going so far as to open a branch there. In the past five years, Myklebust has shipped hundreds of tonnes of whale products to Japan. At the same time, Norwegian fisheries ministers keep promising to increase Norway’s whale meat trade with Japan.

The Norwegian government has also bolstered the industry by loosening regulations. In 2001, when a formula established by the IWC as a basis for potential whaling quotas would have resulted in lower quotas because of the higher proportion of female whales being killed, Norway opted to use a less conservative approach in order to keep quotas high. Norway has also abolished a requirement for inspectors to be on board every whaling vessel and has allowed some boats to opt out of mandatory vessel monitoring systems.

This year, in an effort to recruit more whaling vessels, the government has again relaxed regulations, requiring only one person on board to have whaling experience. This raises significant concerns for the welfare of the whales targeted, as research has shown that whales struck by less experienced harpooners take longer to die. It has been found that 18% of whales do not die instantly in Norwegian whale hunts, and the suffering has been documented to last as long as 25 minutes.

In Norway, there are a number of companies that process and sell whale meat alongside other seafood products. 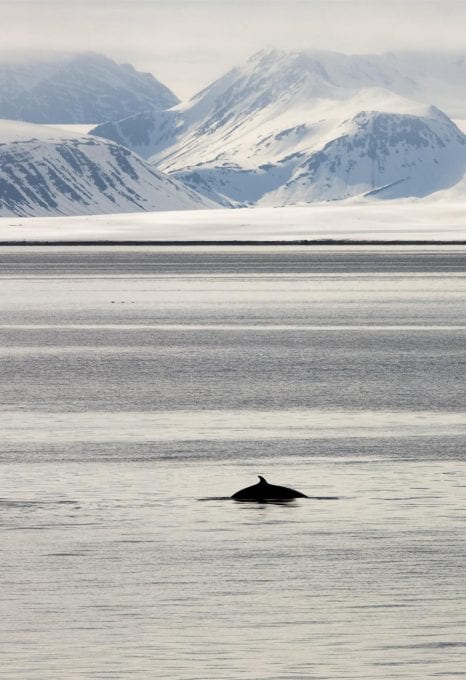 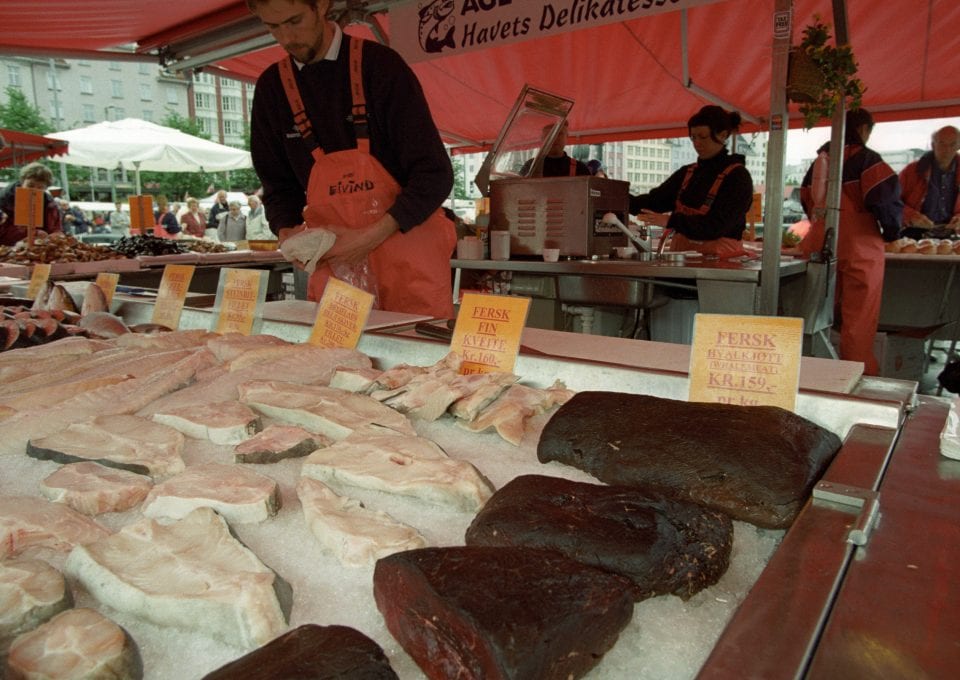 Hunting is only one of the many threats minke whales face.

Watching a whale kill is a visceral, heartrending experience. I have not witnessed a Norwegian hunt, but I have seen Icelandic whalers harpoon a minke – the animal thrashed and twisted before being hauled on board, staining the deck with blood. I have observed a majestic fin whale in Iceland reduced with ruthless efficiency to giant slabs of meat and blubber in less than an hour. The wind carried the scent of that dead fin to me, corrupting my memory of my first whale encounter, tainting their usual vibrant, briny smell with coppery tones of blood and decay. That smell permeated my body, and, to this day, lingers in my soul.

Hunting is only one of the many threats minke whales face. The cumulative impacts of entanglement in fishing gear, habitat degradation and plastic pollution are similarly alarming. Given the rapid rate of environmental change in the Arctic and subarctic, these threats will likely be magnified in the coming years. Minke whale abundance off the Svalbard archipelago in northern Norway dropped by 45% from 2008 to 2014, and scientists documented a fall in minke numbers in the Norwegian Sea from 2008 to 2017. Furthermore, the bodies of minke whales in the North Atlantic appear to be less robust, with two decades of data (1993-2013) suggesting that whales in more recent years have a thinner blubber layer.

All this devastation is occurring at the same time that Norway is experiencing a growing demand for whale watching, since the country offers some of the most spectacular locations and varieties of whale species. During the summer, orcas, humpback, pilot, minke and sperm whales can be seen off the craggy coastline and fjords of western Norway. Further north, blue, fin, humpback, minke and beluga whales can be observed from May to September in the Arctic waters around Svalbard.

To its credit, the government in Norway has introduced new regulations for whale-watching ecotourism operations to protect whales from “unwanted contact with humans” and to “ensure that whale watching is conducted in a secure, sustainable and gentle manner.”

I think of Salt, the sublime New England humpback, and can only hope that the leading commercial whaling country in the world is finally turning a corner and breathing new life into its relationship with whales.

Hunting is only one of the many threats minke whales face.