The Hellenic Republic is situated on the southern tip of the Balkans, a modern society born from those ancient lands that have long been regarded as the cradle of Western civilisation. It was in these lands that humanity witnessed the birthplace of today’s European democratic systems. It was here in Greece that humanity experienced great leaps in political philosophy, and the birth of a great nation that became globally renowned as a seat of literature and learning. Major advances in political, social, and natural sciences have been made in Greece, not to mention the creation of modern mathematical principals.

It’s 2013. I’m living in Wales and we have just founded Project Seagrass. Suddenly I find myself heading out to Greece to undertake research for my doctoral thesis, with lofty ambitions of making some relatively modest scientific contributions of my own. I think it is a quote from the film Zorba the Greek which goes “Happy is the man, I thought, who, before dying, has the good fortune to sail the Aegean Sea”. It’s certainly easy to get lost in the romance of the region. There’s history around every corner and you can feel like you’re living in your very own Greek Odyssey. For me though, it is not the spectacular sites above the waters that thrill me, but what is to be found below the surface.

It’s certainly easy to get lost in the romance of the region. 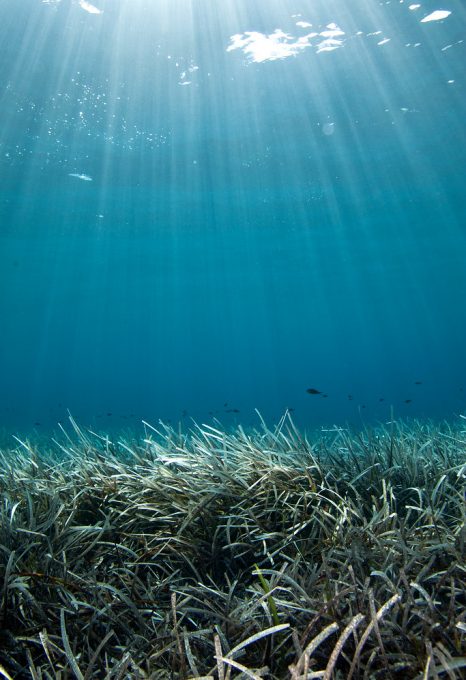 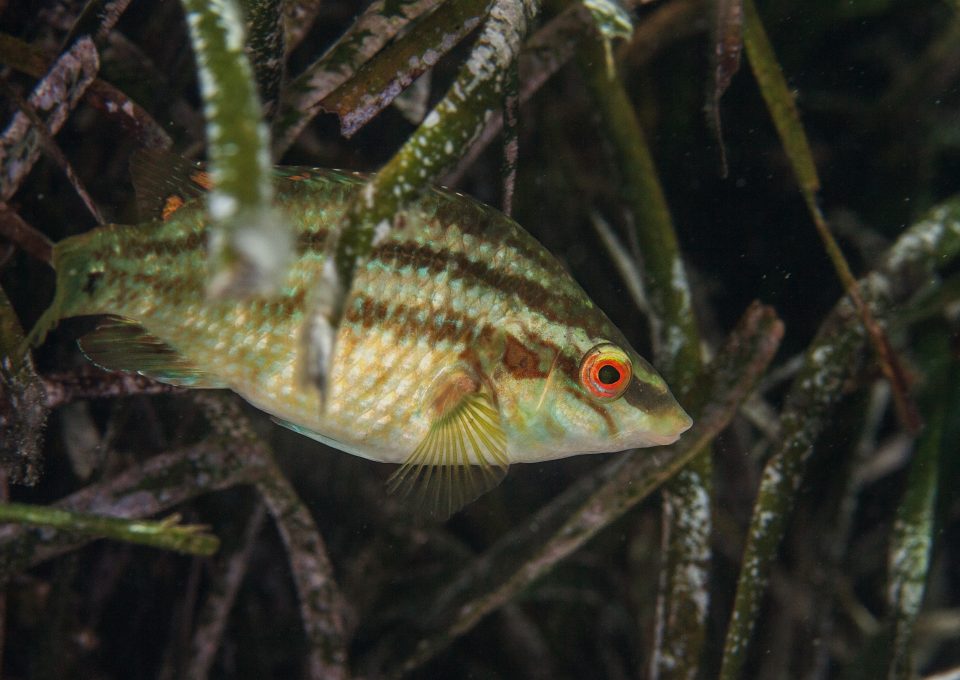 The view from our drone reveals dark coastal carpets of marine vegetation, deep blue shapes contrasting sharply against pristine white sands. We use the drones to get an understanding of the habitat mosaics of the coastal seascape; seagrass meadows, sandy flats, and rocky-algal reefs. Whilst both useful, and undoubtedly beautiful, the real magic is to be had with that first immersion into the crystal-clear waters. I can vividly remember the first time I donned my mask, secured my snorkel and flicked my fins to propel me over my first Mediterranean seagrass meadow, a bed of Neptune grass, into that enchanting space between the green and the blue.

It is through a shared passion for this particular plant and seagrass meadows that I connected with Dr Dimitris Poursanidis, a pioneering marine scientist now working from Iráklion, Crete, and a man with a life dedicated to the conservation of this plant. “I was born in 1981 in a small village in the Attica region, weekdays were for school, Saturdays were spent on in the fields with friends and Sunday was for the sea,” he recalls. Dimitris attributes his love of the ocean to his parents and grandparents who trace their routes to the edge of the Black Sea. “It was they who – perhaps subconsciously – encouraged me to connect with the marine realm and to dedicate my life to connecting the spirit of the sea to new generations.” Later, he fondly recalls that his uncle would give him, as a present, a book with “all the amazing life of the oceans along with the encyclopedia of Cousteau”.

Dimitris strolls down to the shore and levels his gaze at the early morning beach raking activities that try to clear the beaches of anything but sand. This activity has become popular across the region, but here is taking place in front of the new seaside developments that now occupy the same space where he had spent those first happy memories playing in the dunes as a child.

“You know RJ, on those Sundays at the beach, we looked for shells. They were the first thing I used to collect. As a kid I would always be looking to add to my seashell collections. Some of these local beaches would have lots in summer, but others were often covered in these thick mattes of brown rotting seagrass leaves. I thought they were both disgusting and fascinating. I loved to observe the small creatures in the banquettes, the marine isopods that used to jump around when we disturbed the mattes.” He stares out at the horizon. “My Mum used to say, it was in part because of humans, that lots of dead biomass would arrive on the shore and that human activities had meant that the sea wasn’t clean and had turned many areas into places that were no longer suitable for swimming.” It is through Neptune grass that our worlds have collided.

The real magic is to be had with that first immersion into the crystal-clear waters. 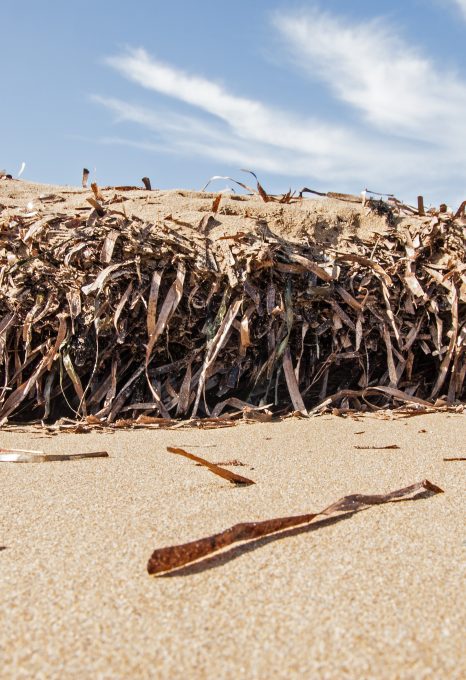 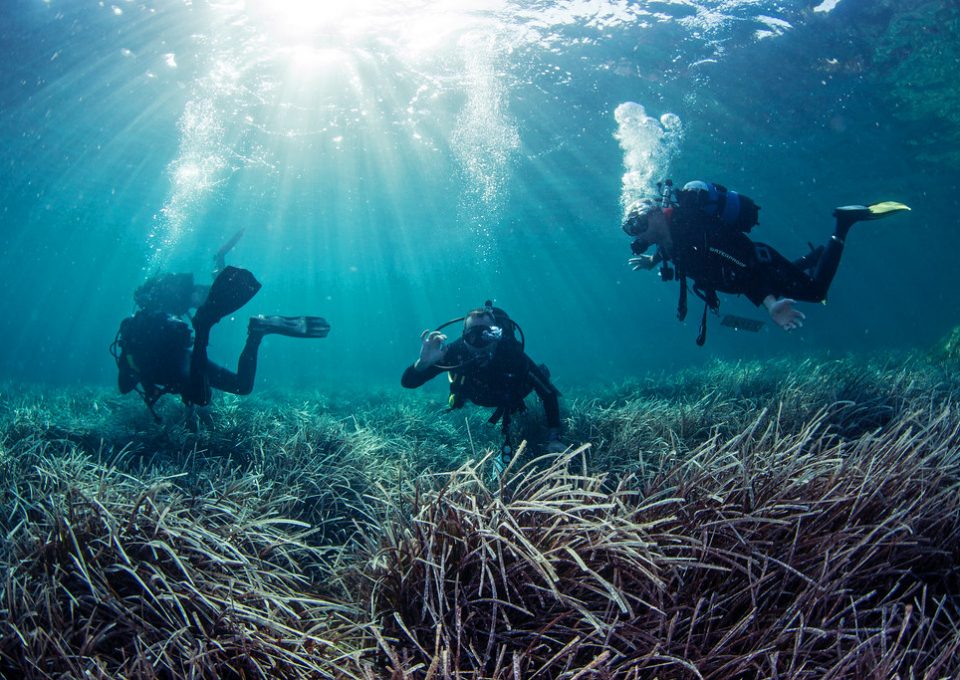 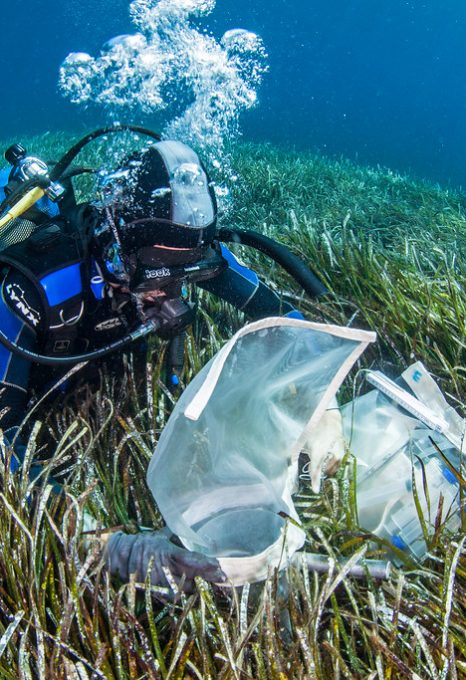 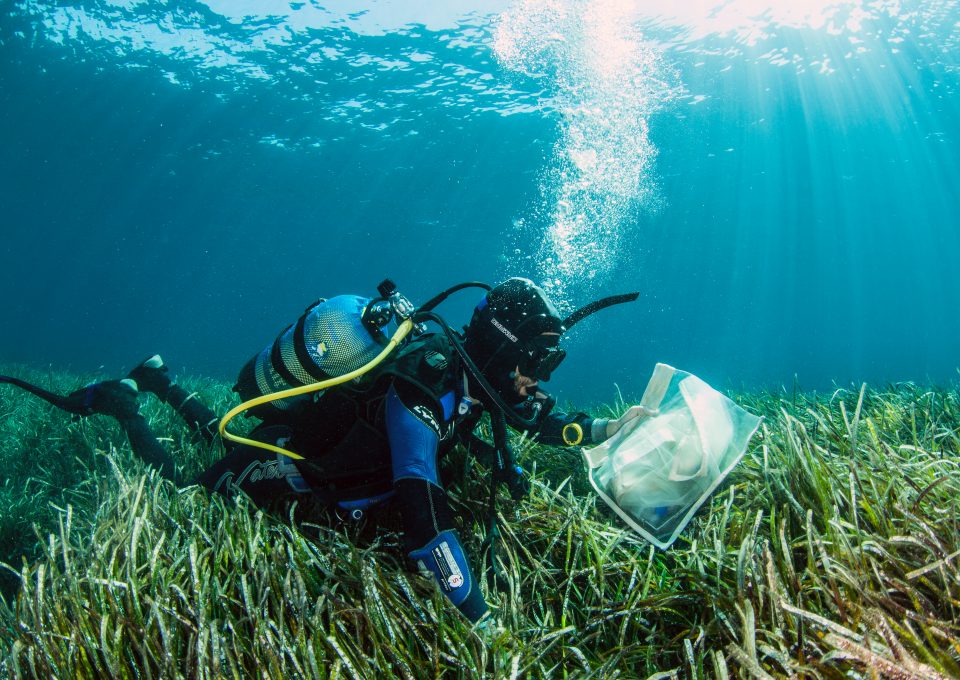 Today, we’re on a work call talking about Blue Carbon, the term for carbon captured by the world’s ocean and coastal ecosystems. We’re discussing how to best communicate the nuances of seagrass science to the world. How to communicate the importance of these seagrass meadows, and their variety, without oversimplifying the story. A constant challenge for any science communicator.

Seagrass meadows occupy only 0.1 percent of the seafloor, but they remove up to one-third of all the carbon that gets sequestered in the seafloor annually. Has the font changed here? Seagrasses also grow by extending a rhizome – a subterranean stem that elongates along the seafloor. They essentially make copies of themselves much like spider plants do, just the stem is underground. Scientists have recently found a clone of Neptune grass in the Balearics that occupies an area a little shy of the size of the island of Manhattan! Not only is this a truly remarkable clone, but the initial seed that gave rise to this seagrass meadow must have germinated on the seafloor nearly 200,000 years ago.

Between the science chats, we shared a coffee and our memories of growing up, of learning in our teenage years that freediving was the best way for us to discover what treasures were to be found in those dark areas on the seafloor that were a mystery to us. Dimitris recalls the fear he felt when first swimming out over the Neptune seagrass meadows in Euboea, Leros where he used to go on holiday. He smiles at the memory of how that same fear triggered what he refers to as an ‘exploration instinct’. The adventure was always to go down, for as deep and as long as possible, to see what was hidden in the dark. For it was down there, in Neptune’s Lair, where we would discover creatures from another world.

The initial seed that gave rise to this seagrass meadow must have germinated on the seafloor nearly 200,000 years ago. 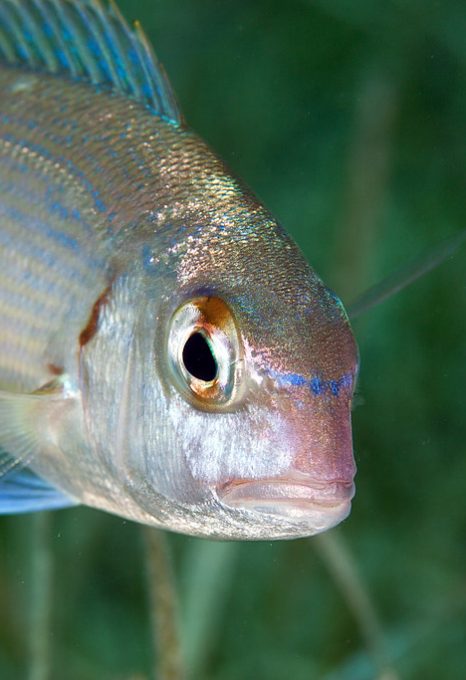 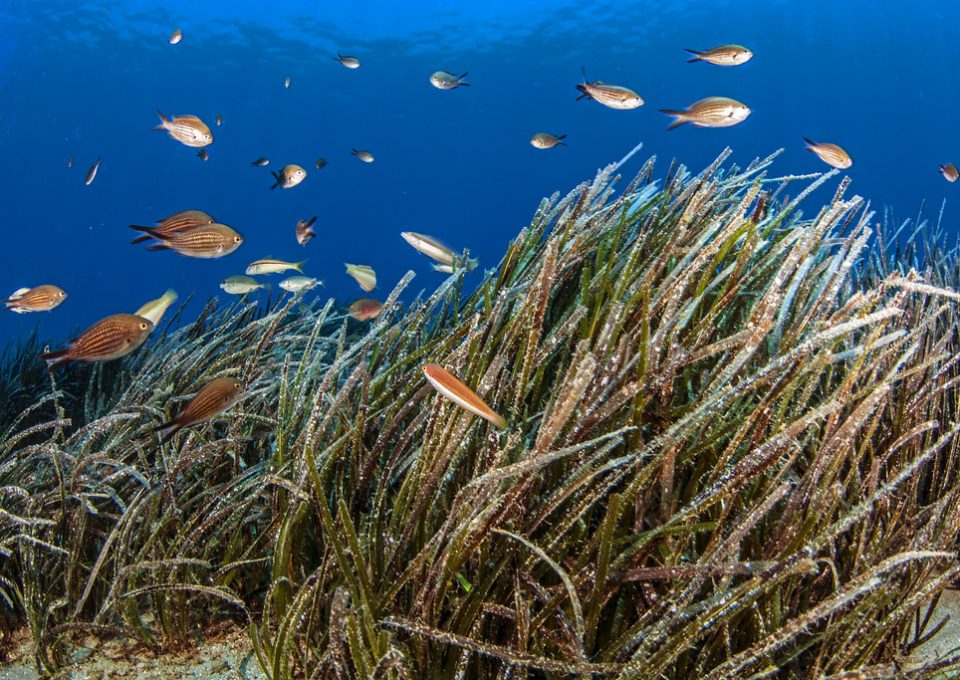 Tranquil moments in these meadows would reveal big schools of fish, schools that seemed to hover above the meadows, or indeed other individual fish that darted in and out from the protection of the canopy. We firmly agree that it was always the seagrass that provided the intrigue, concurring that if we were ever to move to a nearby sandy area, the clear difference in the biodiversity between these seemingly bountiful prairies, and the barren nature of the adjacent bare sand habitats were clearly visible, even to our then, untrained eyes.

As adults we often talk about how revisiting the same meadow day after day was a great way to connect with the habitat and its inhabitants to observe how different species might react to our approach, to see the sea squirts hanging down from the shoots of the meadow, or the nudibranchs that climb on the leaves, the schools of tiny little juvenile fish that swim around the meadow edges in summer and seem to dance under the leaves under the motion of the currents.

I don’t think it would be an unpopular opinion for me to say here that, in my opinion, Neptune grass is the greatest of all the seagrass species. Indeed, its scientific name, Posidonia oceanica, derives its meaning from the god of seas and oceans, ‘Poseidon’ in Greek mythology. And I don’t know of any other seagrass species that has had a TED talk dedicated to it.

I don’t know of any other seagrass species that has had a TED talk dedicated to it. 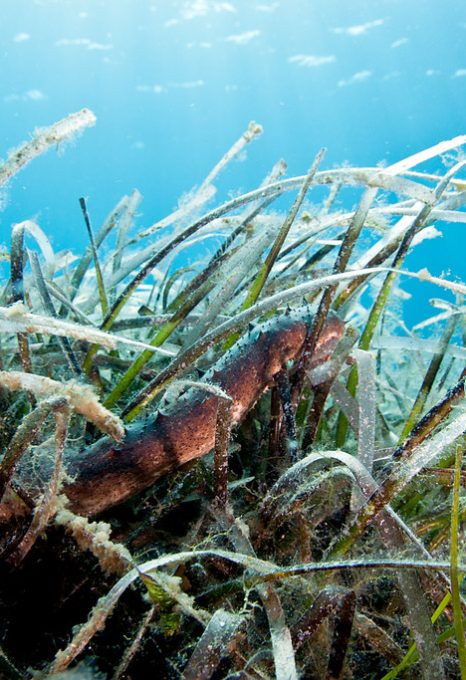 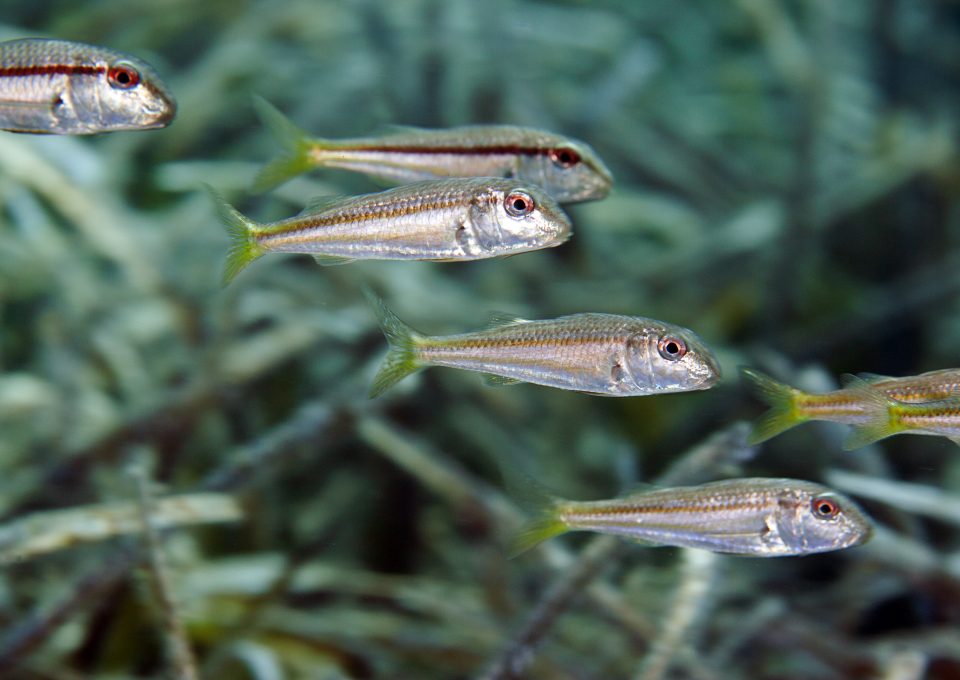 Healthy seagrass meadows are harbingers of a healthy ocean.

Despite it being found across the Mediterranean basin, I think that around the Greek islands, in absence of rivers which transfer sediments that effect the transparency of the water column, the leaves of Neptune grass seem particularly long and clean of epiphytes. Here, in these crystal-clear waters, the meadows can grow to depths of over 40m. Recently, on a project funded by the MEDPAN, Dimitiris discovered a meadow that grows on rocky reefs. Its shallow end was found at 22m and it ended down at 39m where it hangs over coral formations. Here, the divers found several sites that grow far away from the shoreline, being regulated in the deep by the wave break zone and the local hydrodynamic conditions.

Dimitris laughs at the term ‘discovery’ and says he was certain those meadows were there before. What else would have created the banquettes piling high on the coastline? We continue our science communication discussion. It’s never easy to agree entirely as scientists but today, there is one thing that we can absolutely agree on: It’s high time to ditch the idea that seagrasses are the “ugly ducklings of environmental conservation”, as Carlos M. Duarte nicknamed them 15 years ago. As Carlos himself has stated recently, we can now truly recognise seagrasses as the beautiful swans that they are.

Healthy seagrass meadows are harbingers of a healthy ocean. We should be inspired by the tide change from a century of loss of seagrass towards two decades of recovery and the belief that that we can do better. Indeed we must!

Healthy seagrass meadows are harbingers of a healthy ocean.