The storm that was about to sweep the Shetland Islands from west to east was expected to be rough and intense.

I had prepared myself as for a polar expedition, only my eyes were in contact with this cold and biting air that the North Sea pushed back by gust on the bare coasts of the island of Unst. Wanting to reach a small cliff overlooking the sea, the walk was difficult as I struggled against the wind to drag my photographic equipment there. Barely arrived at the top of the promontory, I found myself in front of an extraordinary spectacle.

The sea was white to the horizon and its movement seemed slow as the waves were immense. They came to break below, revealing in whirlwinds of foam bluish shards sometimes so clear that you could almost glimpse the color of the southern seas. The air was saturated with spray and the waves rolling in a continuous din expelled their foam up to the top of the cliff. Looking at these mountains of water rolling in a last dash, I saw a white flash like crossing the wave.

It was what I had come for. In this apocalyptic setting, seabirds, here more specifically gannets and northern fulmars, continued their comings and goings as best they could between the open sea, where they go to feed, and their nesting area on land. During strong gales, seabirds protect themselves from strong gusts by flying low, in the trough of the waves, moving from valley to valley to cut themselves off from crosswinds. I stayed there for several hours observing and photographing this spectacle. Several times, I was interrupted by a squall of hail so violent that I had to take shelter behind a rock. The grains of ice were flying horizontally and yet, looking out to sea, I saw that the birds continued their incessant broom.

If me, I felt violated by the elements, they, apparently not. It is by making these observations and by imagining that for many of these birds the current conditions were in fact almost daily during the 7/8 months of wintering, that I understood that their passage on earth is in fact only a very short stage during the year and that they are above all inhabitants of the sea. 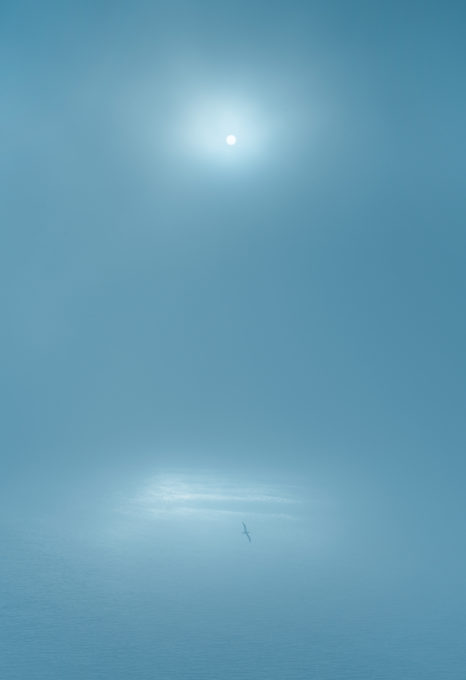 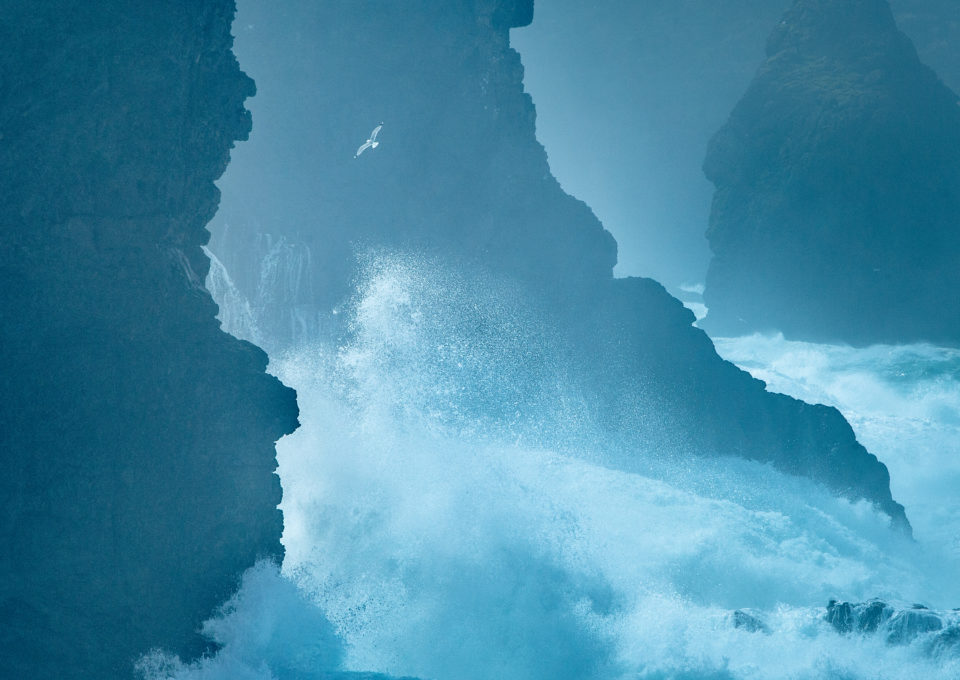 This strong link that unites them to these two environments makes them very vulnerable species because they are also dependent on the fragility of their maritime and terrestrial biotopes. The degradation of the maritime ecosystem, with locally overfishing and more generally the modification of marine currents and the warming of the waters, disrupts the course of fish in the nesting areas. This disturbance, in connection with global warming, forces some birds to travel great distances to feed themselves and their young.

For example, in 2013, the colony of common guillemots at Sumburgh Point, south of Shetland, lost 40% of the eggs at the end of May because the adults, too busy foraging for food very far away in sea had to abandon their spawning. This upheaval in the diet of this colony, at such a delicate moment as that of egg-laying, created generalized stress and led to great losses for the birth rate. This type of event can indeed be repeated if the course of the fish deviates far from the nesting grounds (a northward movement of many species of fish has been observed in recent years).

These disturbances can sometimes affect one species, sometimes another because their fishing techniques and the characteristics of the fish to be sought differ according to the species. Alcids (puffins, guillemots, etc.) seek out large schools of small fish (often sand eels) and their fishing technique allows them to descend deep enough to reach their prey. Larger birds like gannets will seek larger prey and can swoop down more than five meters deep. However, other birds, such as the fulmar, the gull or the great skua for example, remain on the surface and will also feed on fish waste floating on the surface.

These different fishing techniques allow them not to enter into direct competition and allow a very good cohabitation. However, a disruption in the food chain with fish evolving at unusual depths or at latitudes different from normal, causes a real cataclysm in these species. Observations of the widespread decline of some species due to this global climate change, has led the IUCN to classify some of these species such as the  Atlantic puffin and the Northern fulmar as ‘vulnerable’.

The degradation of the maritime ecosystem, with locally overfishing and more generally the modification of marine currents and the warming of the waters, disrupts the course of fish in the nesting areas. 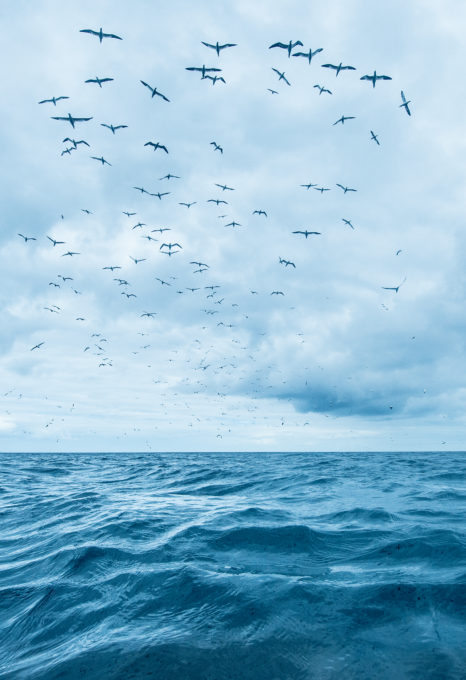 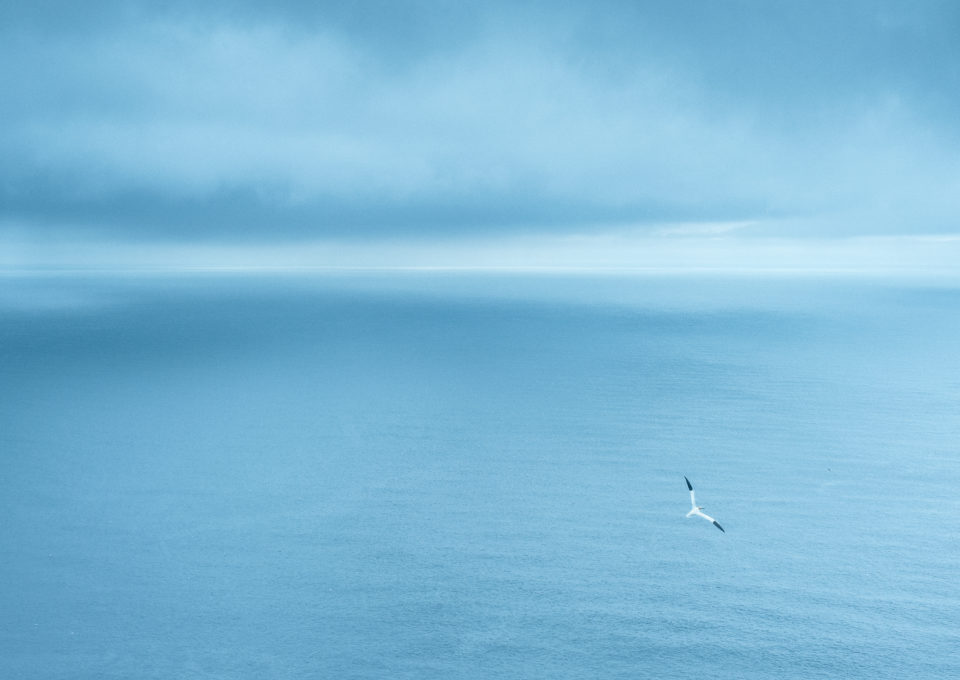 For more than ten years I went every year to the Shetland Islands. This allowed me to better understand the evolution or the decline of certain colonies: some of them decrease until they almost disappear, others relocate due to soil erosion, some remain and seem to be in healthy. This year 2022 has been particularly disastrous for the colonies of gannets, great skuas and gulls because, as if all the problems mentioned above were not enough, they were hit by a terrible epidemic of avian flu. It was very difficult for all observers to see these hundreds of corpses strewn on the ground of the colonies, these disoriented birds and the inability to act in the face of this disaster.

My observations made me feel the fragility of these species and my duty as a photographer is to make others feel it. Very early on, I started to take pictures of birds in their nests of rope and plastic to show the impact of pollution on their habitat, but for me it was necessary to show this strong bond that unites them to sea to also highlight the fact that they are above all inhabitants of the sea and that the impact of the poor health of this biotope affects them strongly. This is where I decided to give a large place to the sea by photographing these birds in the turmoil of the elements during storms or in the vastness of the ocean in calmer weather. This was not an easy task and it earned me very long hours of waiting in the middle of a storm while keeping the tiny hope that two totally random movements would meet: the burst of a wave and the stealthy flight of ‘a bird.

By photographing these birds confronted with the violence of the ocean, I tried to highlight this fusion which binds them to the sea but also and above all their fragility. The population of seabirds is in sharp decline. Seabirds play a key role in the ocean ecosystem and various multidisciplinary studies (oceanographical, ornithological and ichthyological) have shown that their decline is linked to the general poor health of our oceans.

This finding challenges us and we obviously have a duty to protect them. For this, we must in particular accentuate our efforts for the sanctuary of the nesting places but also of wintering by creating more Marine Protected Areas. Every gesture to help these species will contribute to making our oceans healthier.