Stockholm-based Alex Dawson is an acclaimed underwater photographer who specialises in underwater wreck and cave diving. His iconic images are instantly recognisable and have won awards around the world. In this interview, we find out a bit more about his attraction to wrecks, his equipment and his most memorable photograph.

Oceanographic Magazine (OM): When and how did you first connect with the ocean?

Alex Dawson (AD): I first connected with the ocean in Greece in 1993 where I first came in touch with snorkelling and freediving. Shortly after, I got certified as a scuba diver and since then, the oceans and the underwater world has played a huge role in my life.

OM: How did your love for wreck and cave photography came to life?

AD: I dedicated the first 15 years of my diving to capturing marine life. Back then, I wasn’t fond of wrecks at all, especially not of wrecks in dark, cold, green Swedish waters. Around 2007, I was asked to do an article about wrecks around Stockholm by a dive magazine and was kind of forced to dive the many wrecks around there. That’s how I came in contact with many other wreck diving specialists. And since then, I have more or less only dived wrecks. As my experience increased and I received more training I started to also dive deeper and with longer decompressions. My cave diving started during the Covid-19 pandemic and the travel ban. I just wanted to continue educating myself in diving and that was the natural path.

Back then, I wasn’t fond of wrecks at all, especially not of wrecks in dark, cold, green Swedish waters. 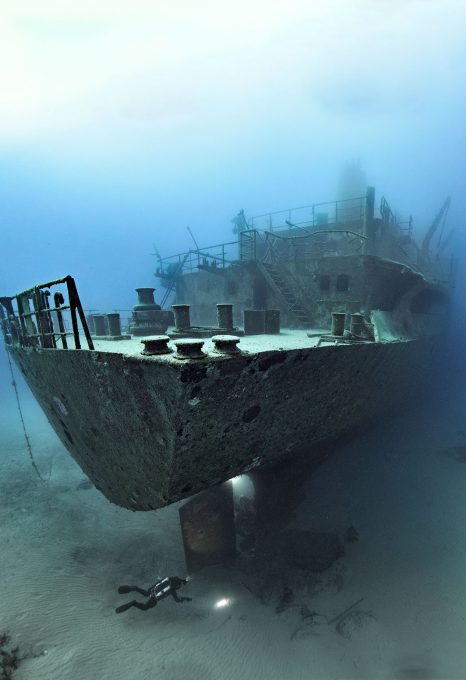 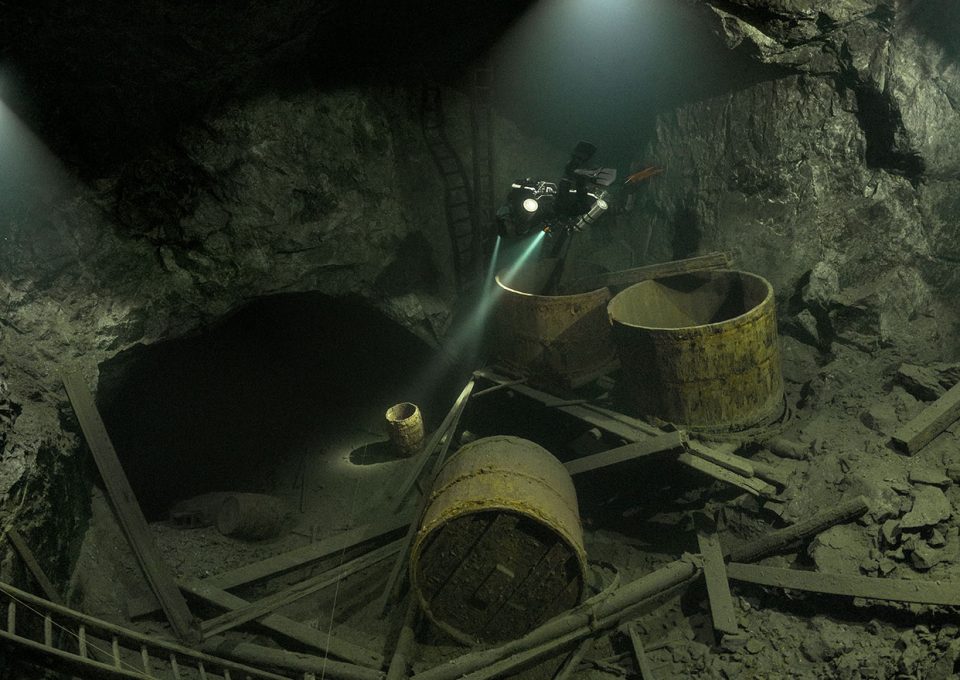 OM: Why do you think wreck and cave photography are such beautiful fields of photography?

AD: I like the big picture. Basically, I shoot landscape photography underwater. For me, it’s important to include a diver in the shot to show the perspective and the actual size of what you’re looking at. It gives a sense of size and depth to the image. I love taking ‘hero shots’!

OM: Which dive sites are your favourite?

AD: It’s really difficult to name one favourite dive site. A great dive site is one where even bad dives end up being good, a site where you can dive hundreds of times without ever getting bored. One of these would be the Wreck Haven in Italy’s Arenzano. Some others are Dirty Rock in Cocos Island as well as the Fakarawa Pass in French Polynesia.

OM: Tell us about your most unexpected wildlife encounter in a wreck or cave.

AD: I once met a seal inside a wreck unexpectedly when I was a less experienced diver. I really don’t know if the seal or I were more scared.

OM: Some of your impressive photos are shot below thick ice blankets. Explain how it feels like to be stuck under ice.

AD: For me, diving under ice, or in ice caves for that matter, is not much different to regular diving in terms of feeling safe or scared. The emotional part of diving under ice is amazing – especially on a sunny day when you get beams of light shining through the ice. It creates fantastic light patterns over your head. Ice diving in Greenland is one of the best experiences I’ve ever had underwater.

OM: Tell us more about your most memorable photograph. How did it come about? What went into the shot?

AD: This will have to be the photo I took when my friends found a wreck in the Baltic Sea. It had many bottles in it that turned out to be the world’s oldest champagne! We recovered almost 90 bottles that were around 200 years old. I was the official photographer during the bottle recovery and I remember I wanted to take a close-up image of a bottle down at the wreck sand to make the image more interesting. I placed a light behind it to give it some backlight and it turned out really cool.

For me, it’s important to include a diver in the shot to show the perspective and the actual size of what you’re looking at. It gives a sense of size and depth to the image. I love taking ‘hero shots’! 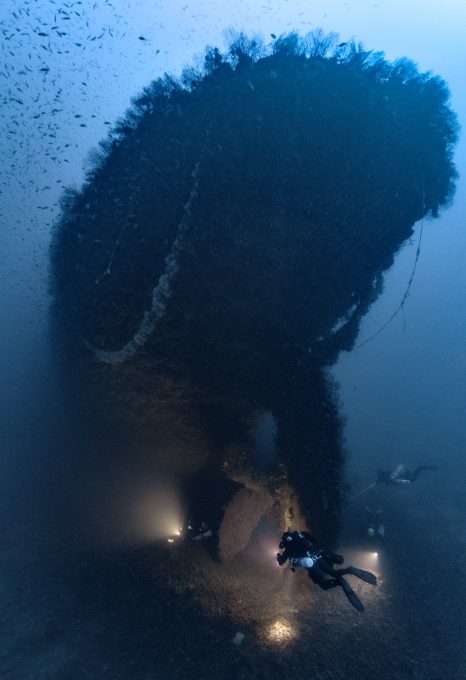 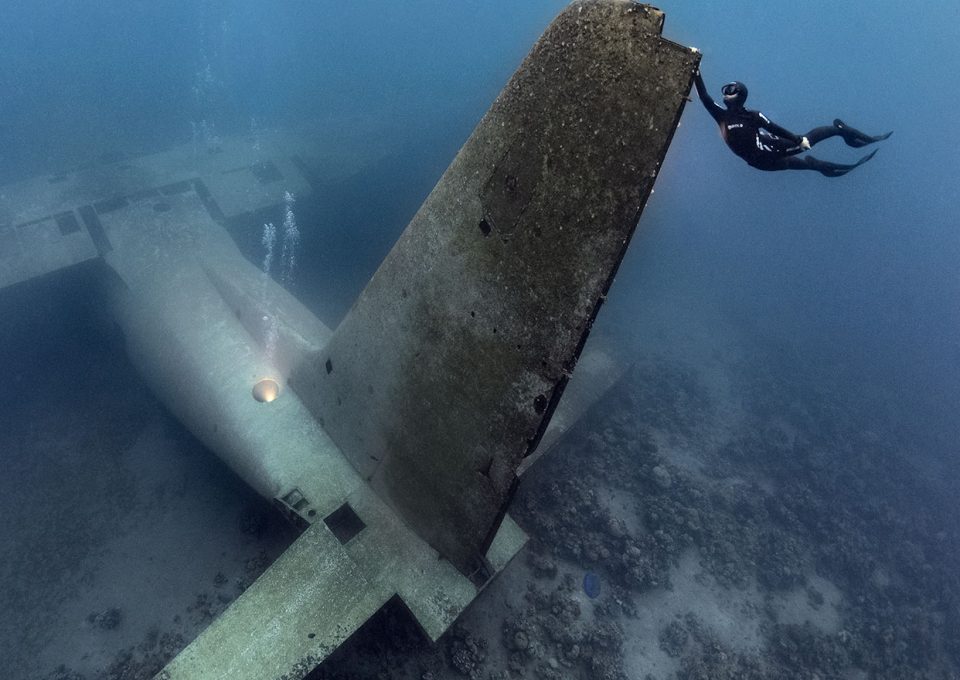 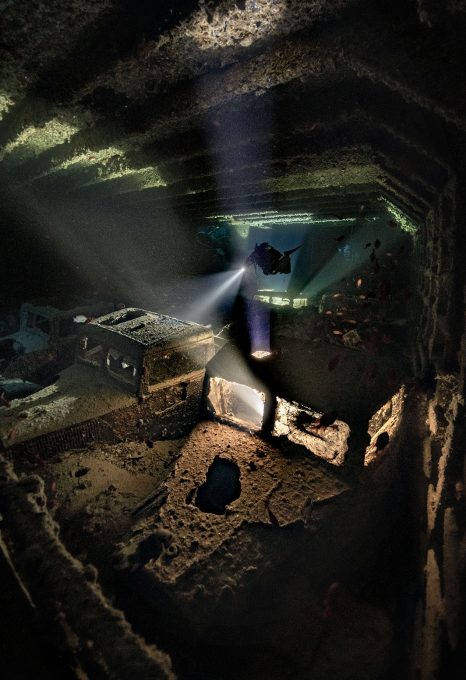 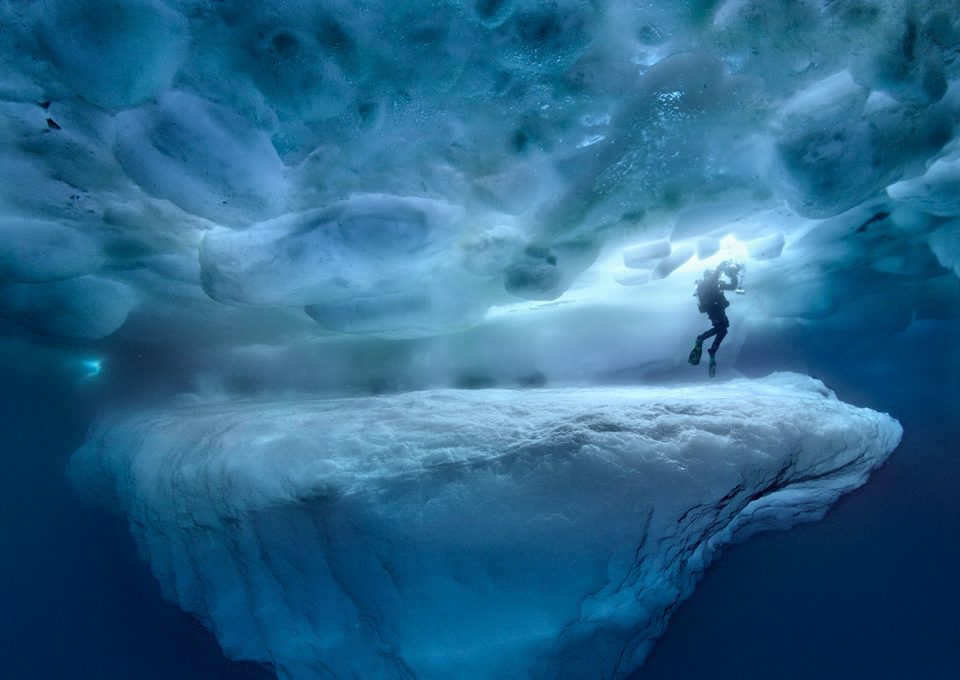 OM: How do you usually plan your photographs?

AD: First of all, I find it very important to know your dive site so the more dives you do at one particular dive site, the better the results will be. Then it’s all about briefing the team of divers on where they should be and where to point their lights and so on. The most difficult part of this kind of photography is that we don’t have that much time for each shot; often, it’s very dark and deep. That’s why preparations on land are key.

OM: You use rebreathers to photograph wrecks. Why is this difficult?

AD: The rebreather is a fantastic tool for many photographers. However, it takes a lot more focus, training and attention than diving open circuit. The most important part is to train a lot and gain experience on your rebreather before you move on to bringing the camera. Today, I’m using the Divesoft Liberty sidemount rebreather and it’s a fantastic tool. It’s great for traveling since it’s a light machine to travel with. My next step is to start using a dual rebreather so I will be able to use my sidemount together with a backmounted rebreather to increase safety. 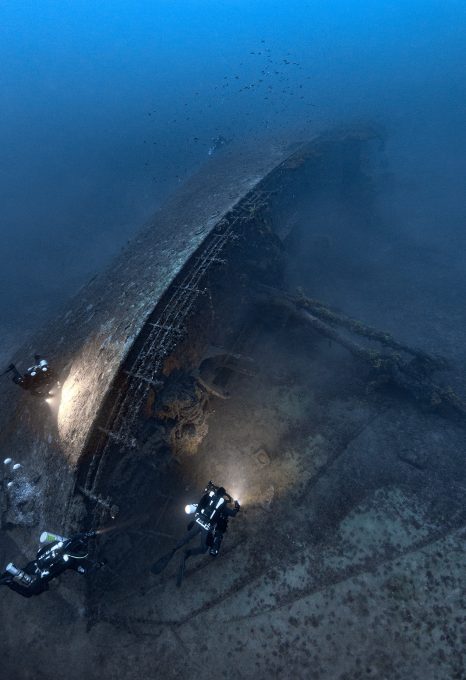 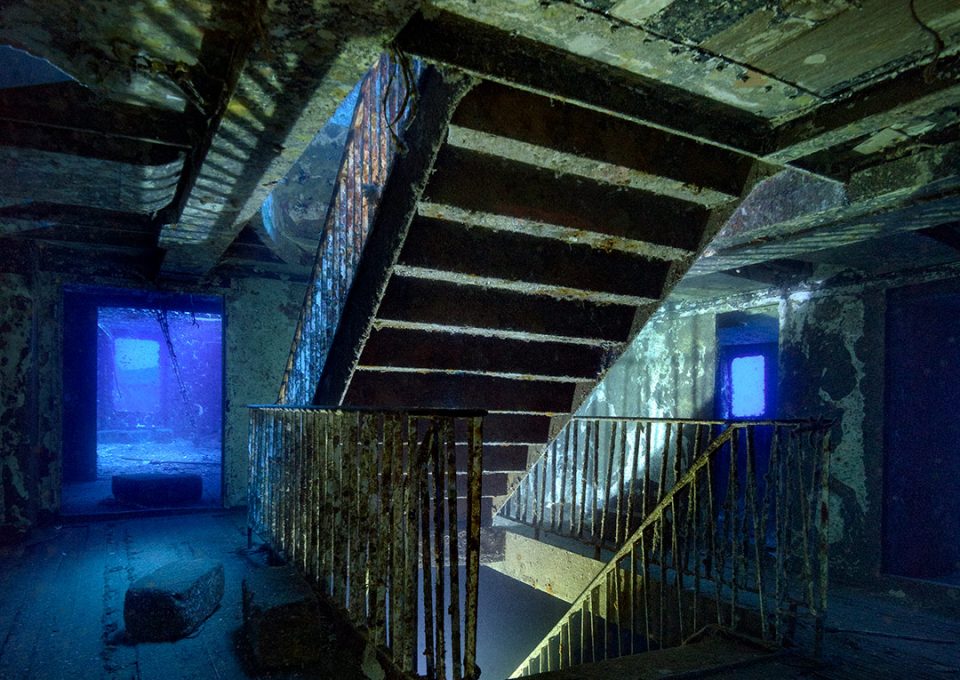 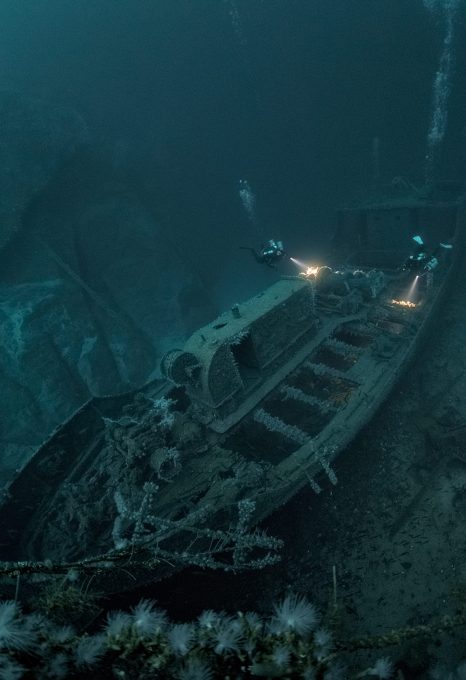 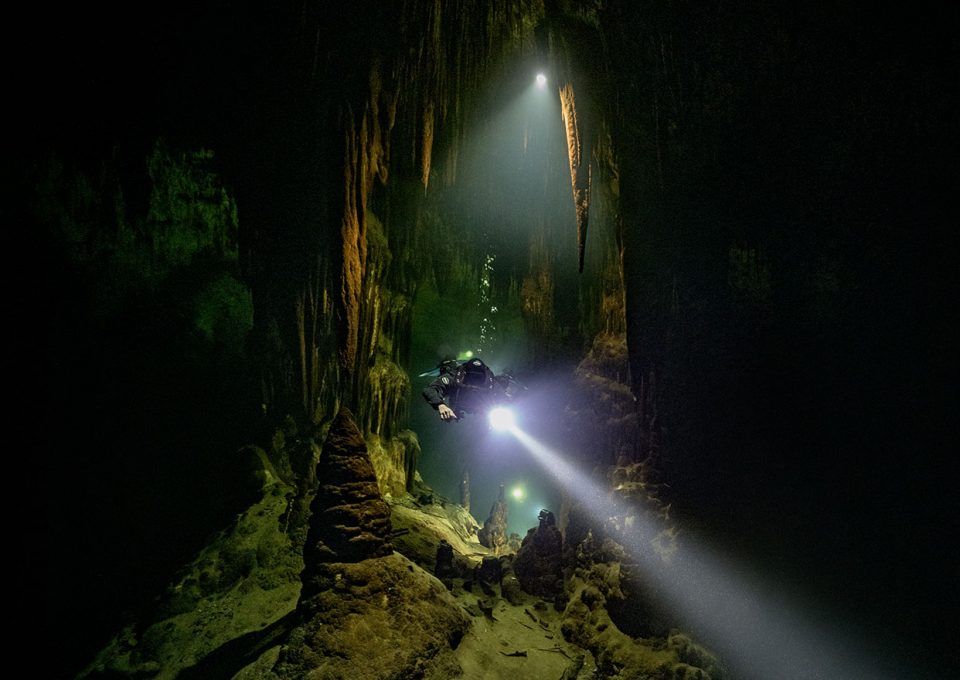 OM: What is in your underwater photo kitbag?

OM: What is your top tip for aspiring wreck and cave photographers?

AD: When it comes to any wide-angle photography such as cave, wreck or reefscape photography it’s extremely important to have a great camera with a good wide-angle lens. At the moment, I use the Nikon Z7 II for its fantastic dynamic range and incredible colour science and detail. The next important thing is to really get to know the limits of your camera which is easiest on land. Really make sure you know your max ISO, shortest shutter speed you can use and how to work the aperture for depth of field.

Head over to alex-dawson.com to discover more of Alex’s journey.