When the lights go out on a ship it’s an unnatural and slightly unnerving experience.

In the great maritime disaster movies, the final death throes of the ship are always accompanied by the lights going out. A secure, functioning ship is illuminated; always. At sea in the high Arctic during winter, the sensation of abandonment is perhaps even more intense. The remoteness, the proximity of ice and the cold are all more keenly sensed. As the eyes begin to adjust, we realise that the darkness isn’t as intense as we might have first thought. Stars appear brighter and the moon casts a glow over the ice and water. Only now can we begin to study the real response of organisms to illumination in the polar night.

Ships at sea are always illuminated; they never turn out their lights. And that’s part of the difficulty faced when trying to understand how complex marine ecosystems respond to natural illumination. When a research or survey vessel operates at night they are illuminated, not just their navigation lights, but also a raft of intense deck working lights. Ships have been described as a ‘cathedral of light in the darkness’. Yet we know that marine organisms will respond to light so the very presence of the ship becomes a huge influence on what we are trying to study. I’ve been working with colleagues at the Scottish Association for Marine Science (SAMS) and in Norway investigating how the marine ecosystem in the Arctic functions at the darkest time of the year, the polar night. It’s a period when the sun is well below the horizon and humans perceive continuous darkness. The popular understanding of the polar night is a period of exceptionally low temperatures and an ocean that is ice-covered and biologically barren. Our first hints that this was not the case was over a decade ago. We had deployed instruments, similar to an echo sounder, on moorings in fjords around Svalbard. The instruments could measure aggregations of zooplankton in the water for a full calendar year, which included the period of the Polar Night. What we saw was organisms moving up and down through the water in a coordinated way during the darkest part of the year on a regular daily cycle. This active biological behaviour was totally unexpected and raised questions about what was moving and why – what the risks and benefits of this rhythmic activity were. And so, a decade or more of polar night research started.

Yet we know that marine organisms will respond to light so the very presence of the ship becomes a huge influence on what we are trying to study. 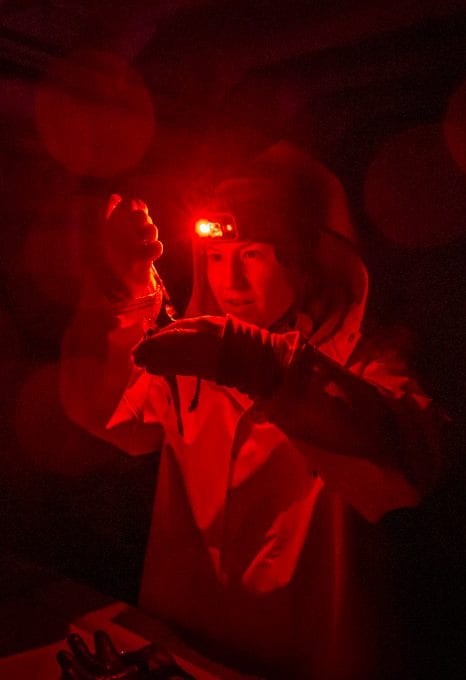 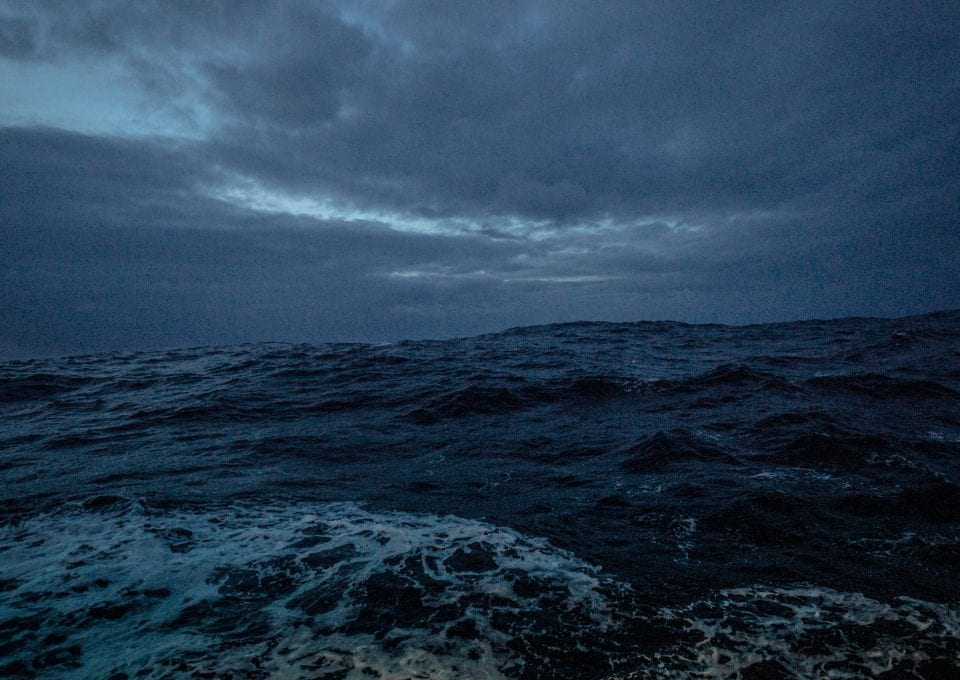 “It is quite ironic to think of, but just like stumbling over something in the dark, the focus on the dark and unknown polar night started out by ‘accident’ – we actually wanted to study marine processes in the midnight sun,” says my colleague on the study, Professor Jørgen Berge, from The Arctic University of Norway (UiT). “But in order to do so, we had to deploy our instruments in the autumn before the sea froze over. Hence, the instruments were in place and took measurements long before the sun returned in the spring – we expected them to record nothing during the polar night, as this was a period of the year when we all assumed activity levels were at a bare minimum. We were in for a real surprise when we first had a look at the data, and actually though that there was something wrong with the instruments!”

Typically, Arctic research has focussed on the summer and a few months either side. The light, the slightly warmer temperatures and the reduced ice extent at those times of year mean that access is easier and the science activity is at its peak. I don’t know the exact proportion, but I wouldn’t be surprised if for every thousand data points collected in summer there is just one from winter. We just know a whole lot less about the polar night. Yet it is very much part of the annual cycle of the Arctic ecosystem; we shouldn’t just ignore it and pretend nothing happens – a scientific equivalent of ‘move along please, nothing to see here!’ We have referred to this gap in our knowledge of the polar night as our ‘Black Box’, and we have been gradually prising open the lid and beginning to see what is inside.

One way of opening the lid is to be out on the ocean during the polar night. Jørgen has organised annual research cruises (an unfortunate term given the conditions to be endured) for the last ten years. These have focussed on the waters around the Svalbard archipelago at latitudes of 80°N or more.

We had to deploy our instruments in the autumn before the sea froze over. 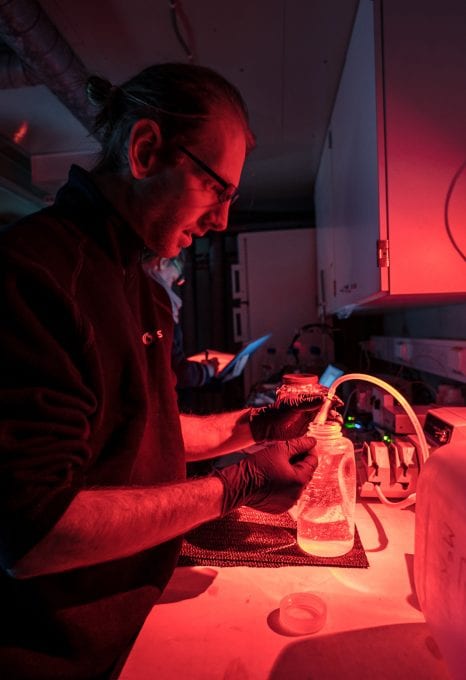 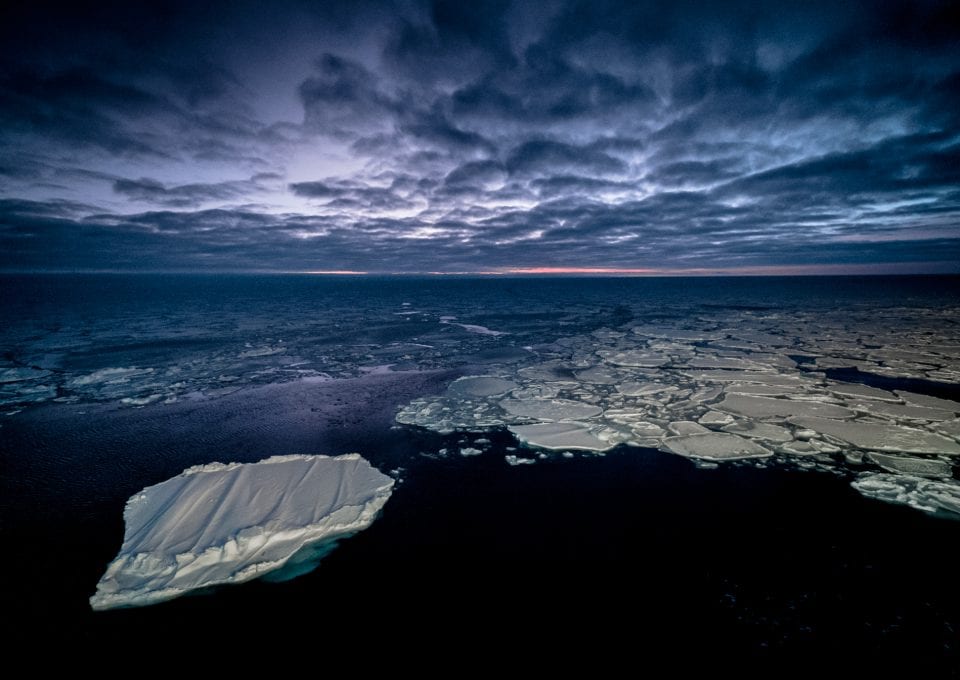 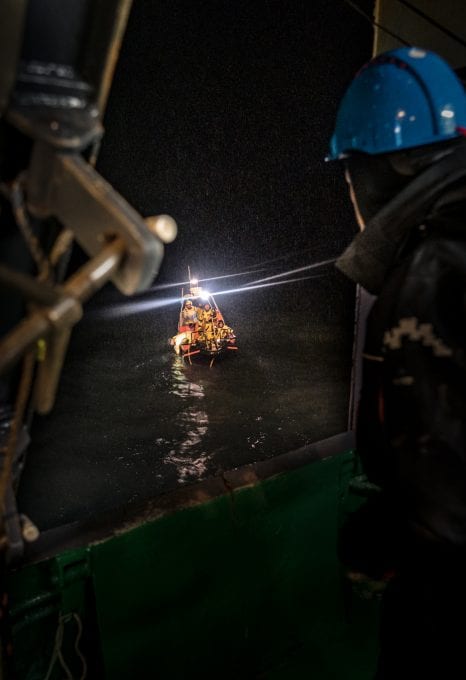 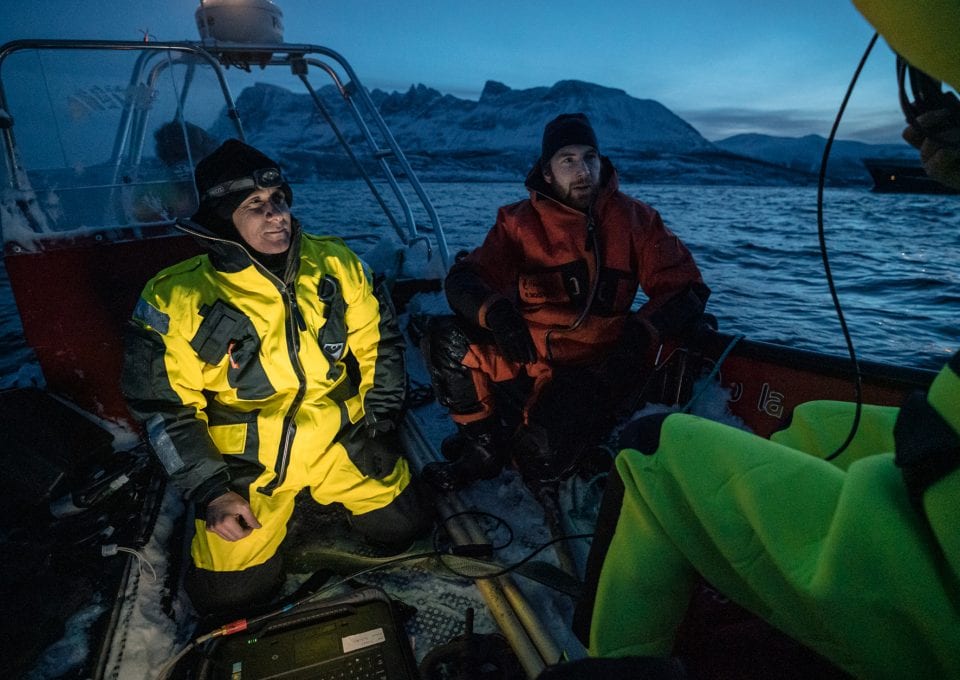 “Some of the most inspiring moments I have ever had has been when left alone in a small boat in the polar night,” says Jørgen. “Only then, when you get away from the safety and illumination of a research vessel, you really start to grasp what the polar night really is – lights from the stars, the flickering aurora borealis, the bioluminescence from organisms in the sea, and a soundscape totally dominated by soft environmental sounds. But then, literally out of the dark, the sound of a fulmar flying above your head or the chattering of little auks identifying the whereabouts of their mates as they break the surface after a foraging dive in the dark ocean below. For me, in such a moment, it is impossible not to be taken by the beauty of the darkness and the mystery of the polar night.”

On recent cruises we’ve tried to integrate many more measurements to include the ocean conditions and water chemistry, the illumination and optical properties of the water, the levels of phytoplankton and zooplankton, behavioural work and animal physiology. We are also starting to make greater use of technology, particularly robotic vehicles that allow us to make observations of the marine environment at a distance from the ship or long after we have returned home. Sensors are also important and we have given particular attention to new sensors for measuring light at extremely low intensities and new designs of echo sounders that allow us to discriminate between different types of marine organism.

The work we undertook in January 2018 brought together a number of these new approaches. What we wanted to do was test the impact that an illuminated ship would have on the vertical distribution of zooplankton and fish. We had assembled a great team of researchers from Norway, USA and UK with all the sensors necessary to answer the question. Critically we also had a ship crewed by some of the most experienced Arctic seamen available to us – they were willing to work with small boats, near the ice, in complete darkness to support the science. These investigations are impossible without those crew.

Jørgen notes: “I know not of any other ship where this could have been done. In fact, I know this kind of work has been declined on other large research vessels operating in the Arctic polar night.”

I know this kind of work has been declined on other large research vessels operating in the Arctic polar night. 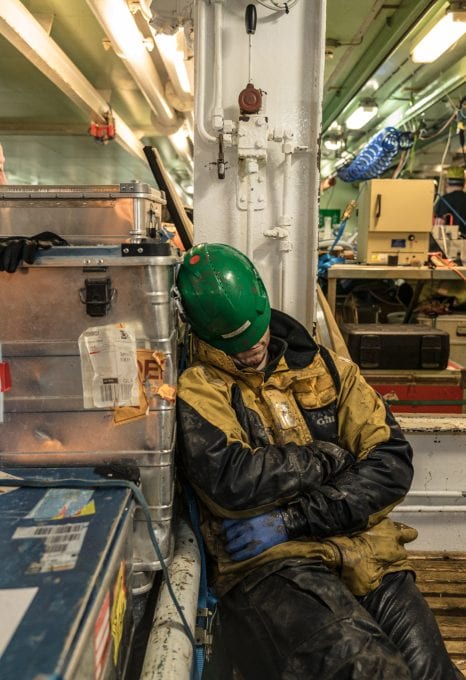 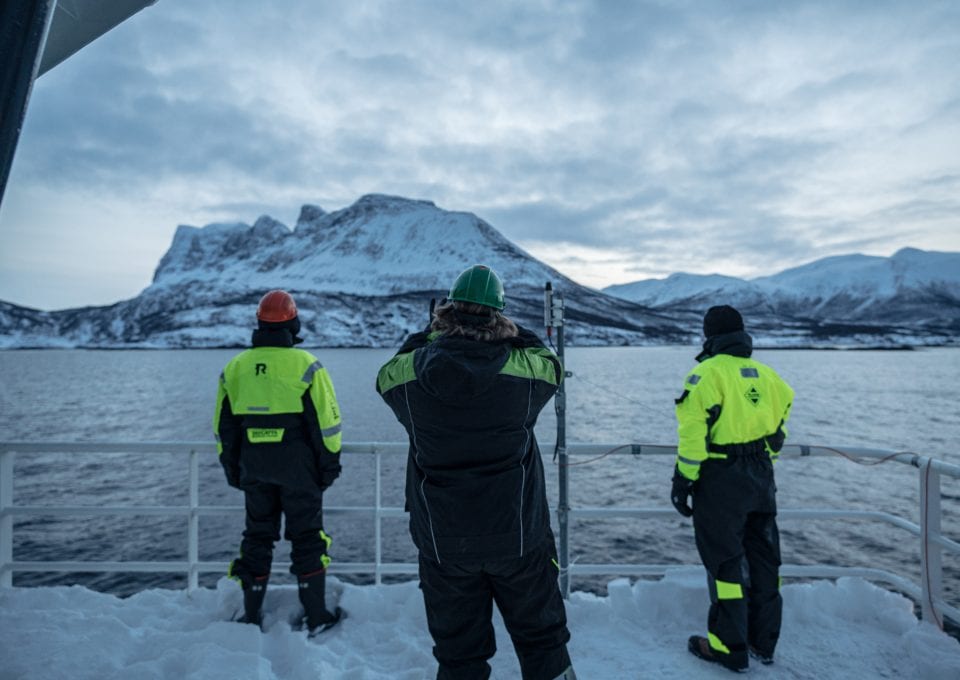 The work now is to understand how sensitive these organisms are to light.

With the small boat we carried light sensors and echo sounders so we could measure the ecosystem response to illumination hundreds of meters away from the ship. By alternating between a fully darkened ship and full illumination, we found that the lights influenced a region of water that extended many tens of meters away from the ship. By making measurements during the polar night from an illuminated research vessel we in fact modify the very thing we are trying to study – the distribution of organisms through the water.

Once we return to shore from such an expedition the careful work of analysing the data begins. There is always a desire for more data and that particular experiment could only be conducted at three locations. At each location the response of the organisms was different. What to make of it? Well it gets us thinking; one answer prompts three new questions. The work now is to understand how sensitive these organisms are to light, how they will respond to reduced ice cover in winter and to find ways to extend our understanding across the Arctic. Whilst understanding how the Arctic Ocean functions today is of course interesting, there is much to be gained from being able to use mathematical models to project forwards in time and see how the marine ecosystems of this ocean will respond to the rapid changes in climate that are being witnessed. What will our “Black Box” look like in the future?

“We know that the Arctic Ocean is changing, and we know that ship traffic – fishing, research, transport and its like – in the polar night will increase as sea ice declines,” adds Jørgen. “Operating in the dark, these ships will be permanently illuminated while at sea. What we do not know, is what impact this will have on the ecosystem and the highly light-sensitive organisms that live there.”

The work now is to understand how sensitive these organisms are to light.