As the race to mine the deep sea increasingly becomes a cause for concern, learning more about this elusive space could help to conserve it. Underwater photographer Henley Spiers joins the Nekton Maldives Mission to help uncover the secrets of the deep.

Imagine having a house but only light on the first step of the stairway…” At a restaurant in Malé, I quiz marine scientist Paris Stefanoudis on the need for deep sea exploration. His analogy strikes a chord. Rather than the vastness of the ocean, I relate more easily to a home, one in my possession and yet one in which I only truly understand the smallest of areas. In such a scenario, how would you realise your home’s full potential? Moreover, working in the dark, how could you make the right decisions to safeguard the blind zones? It’s commonly cited that 71% of the Earth’s surface is made up of ocean, but this only paints a two-dimensional picture. With an average depth of 3.7km, it is even more impressive to appreciate that the ocean makes up 99% of our planet’s biosphere. Of this habitable, underwater space, we have only explored a tiny fraction of a percent.

Aboard the RV Odyssey, the Nekton team, at the invitation of the Maldives government, delves into these unknowns, conducting the first systematic study in the waters of the world’s lowest-lying ocean nation. ‘Nekton’ means aquatic life which swims against the current, and the charity by the same name was founded by Oliver Steeds, present as mission director in the Maldives. As a successful investigative reporter, Steeds thrived on asking uncomfortable questions in dangerous places, and after an assignment brought him face to face with the destruction of the seabed by trawlers, the same probing line of questioning was turned internally. Kept awake by the challenges facing the ocean, the most important yet least protected part of our planet, Steeds resolved to dedicate the rest of his life to its preservation. It is this final step which marks him out as a tide-changer. For most of us, ecological anxiety is followed by a sense of helplessness, but Steeds’s unshakeable determination has led him to action – personally and in setting up some of the most ambitious ocean exploration and conservation missions operating around the world today. The current mission is no exception. Aboard the same vessel used to film Blue Planet 2, an international team of 25 scientists will spend 34 days at sea, forensically examining the Maldivian atolls.

Even on a ship brimming with high-tech wizardry, sometimes simple is best, and at daybreak the ever-smiling team of South African researchers deploy landers into offshore waters. These baited remote underwater video systems are rudimentary in construction: red metal bars, cushioned by bright yellow foam blocks, with a small, circular bait box sticking out of the front end. A metal weight sinks the system down to between 300m and 900m, and many hours of solo diving later, an acoustic tag will release the landers rig back to the surface, ready for collection. Their cameras have the habit of returning with jaw-dropping footage from inaccessible depths, with visitor logs from the ‘landers cafe’ displaying for the first time the diversity of sharks in the Maldives’ deep sea, from enormous six-gilled sharks through to scalloped hammerheads and the very rare bramble shark.

In sharp contrast to the low-maintenance landers, a pair of acrylic domed submersibles are the stars of the Nekton Mission. Each day centres on these incredible, yet demanding machines, with a devoted team providing round-the-clock care. It turns out that to follow a career as a professional aquanaut you must not only be a cool-headed pilot, but an industrious mechanic. Offering a front row seat to the depths of our planet, these are not just scientific tools but vessels of inspiration, with the power to shock and awe passengers, carried in comfort to our biggest ocean blind zones. On this mission, the first Maldivian aquanauts, including Environment Minister Shauna Aminath, will boldly go where no other Maldivian has gone, returning as national heroes. 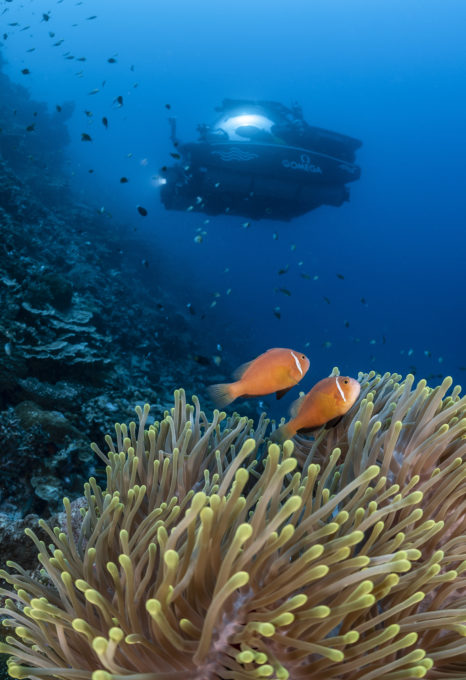 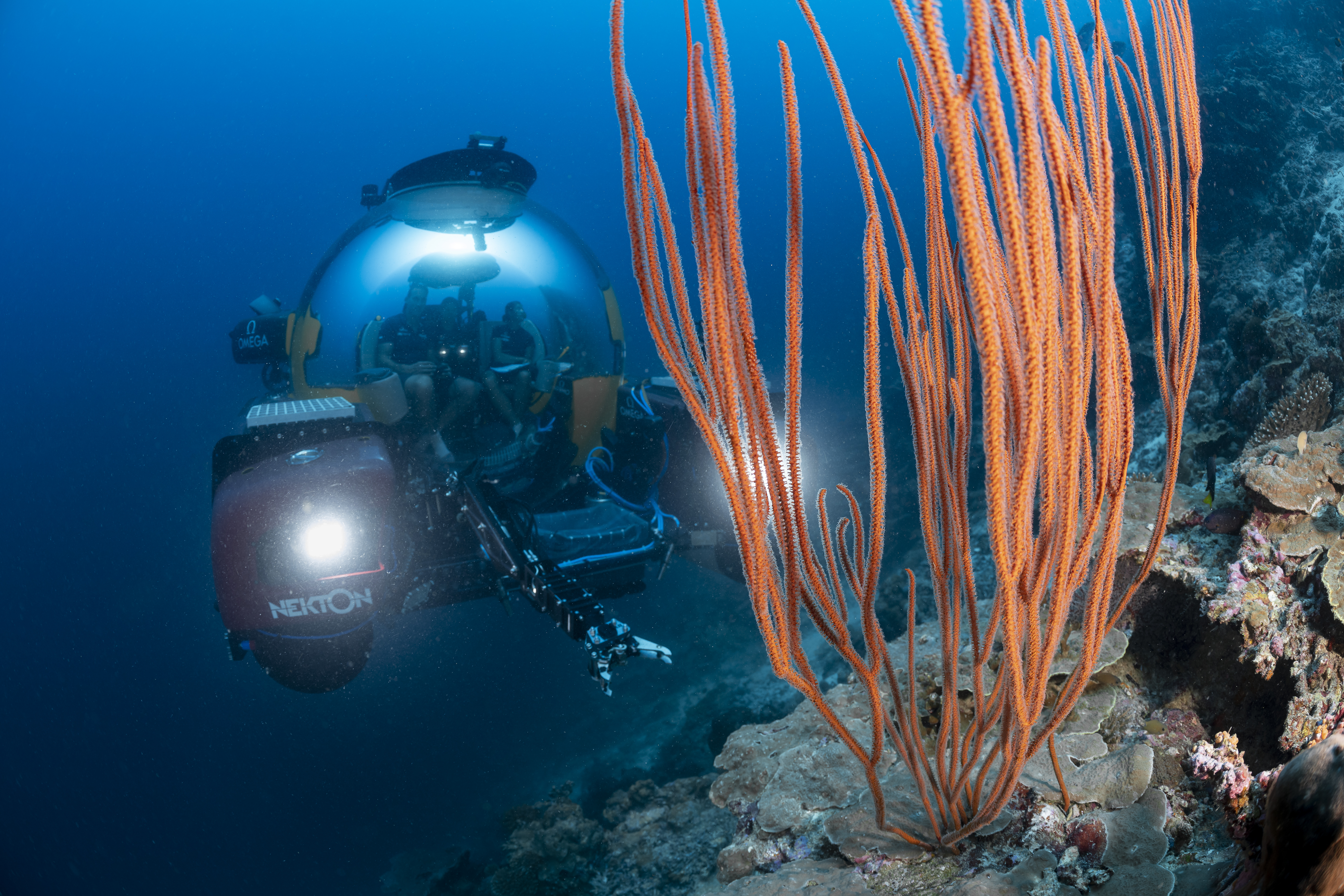 My first date with the Omega Seamaster 2, the mission’s lead submersible, occurs outside the bubble on the fringing reef of Addu, the Maldives’ southernmost atoll. The rendezvous requires unusual protocols, with the sub blowing bubbles from depth to allow us to find its location from the surface. Following the sound of whirring engines and crackling radio, the submersible displays impressive agility as I swim to meet it down at 40m. As a dive destination, the Maldives is famous for its plunging walls and pulsating currents. The submersible must contend with these too, skilfully plotting its way along the seascape. Nitrogen courses through my body and the dive computer warns that the dive must soon draw to a close. Whilst my physiology pays a steep price for time at depth, the team inside the submersible suffer no such constraints. For the first time in a long time, I feel the allure of going deeper, yearning for just a few more minutes, a few more metres… Pushing aside these dangerous urges, the scuba diving team waves goodbye and we head for the surface.

The previous day’s frustration has given way to anxiety as I slip feet first into the acrylic bubble. The safety video was comically reminiscent of an airline equivalent and, even if we will soon be subject to crushing pressure 51 times greater than at the surface, I recognise this anxiety is not driven by fear for my safety. Admittedly, there is some nervousness at an unfamiliar experience, and worry about biological needs striking during the five-hour submersion, but most of all I am overwhelmed at the opportunity to visit the otherwise inaccessible, the hidden parts of an environment around which my professional and personal life revolve. Today’s planned 500m dive is well within the sub’s 1,000m range, and whilst the 16.5cm-thick acrylic dome protects us from the pressure, the interior functions as a giant rebreather. Comfortably attired in shorts, t-shirt and socks, we are even permitted drinks and snacks on this deep-sea safari. Release valves open, bubbles escape, and the sub plunges beneath the waves. The world turns blue, colour draining from our faces and the sub’s red livery.

Our field of view is impressive through the sphere, so great you barely know where to look, fearful of missing out on an exceptional sighting. As the sub drops beneath 100m, light diminishes noticeably, as if we have crossed an invisible border between the bright blue overhead, and the gloomy depths beneath our feet. At 200m we enter the twilight zone, it feels like complete darkness and from here on we are entering virgin territory. Once the seabed comes into view at 500m, we are almost certainly the first humans to ever set sight on this patch of ocean.

Utilising the claw comes with a dexterity reminiscent of a first-time chopstick user.