In September, while the skies were still mostly clear and the waters still mostly warm, we set sail on the Rara Avis.

Its steel hull is painted a bleached-out blue and the wooden seats are worn into dips where thousands of different people have sat and watched the rolling horizons since its construction in 1957. The three-mast schooner belongs to the Brittany-based charity Les Amis de Jeudi Dimanche (AJD), and it never stops sailing, picking up passengers from all walks of life, taking them on journeys to help with addiction, isolation or social exclusion. This journey was a bit different (the boat had been filled only with people we knew) and our objective was more philosophical, as we were attempting to answer the question: How can we put the world on a boat?

The journey began long before the actual departure. Thomas, my odd, French and entirely wonderful partner, had crossed the Atlantic onboard the Rara Avis in the 1990s along with our friends Eric, Valerie, Poulon and Françoise – all of whom were back onboard for this trip. They had intense memories of their initial crossing. It was time to hoist the mainsail again and let the boat bring people together in unexpected ways, starting with the sourcing of 30 willing souls ready for the high seas. By mid-August, we had assembled our varied group, which ranged from teachers and chefs to captains and artists, as well as a core team of seven crew in their final week of work experience with the AJD.

We climbed on board at 8pm on August 31st. Our first meal was spent moving through the lives of others, asking benign and generous questions about where we live, what we do and how we know each other. At 2am we left l’Aber Wrac’h for the Scillies, leaving the haven of Land for a deep black and heaving swell, sleep or sickness keeping most people below deck. I stood outside from 3am-7am, watching France’s street lights disappearing one by one.

we were attempting to answer the question: How can we put the world on a boat? 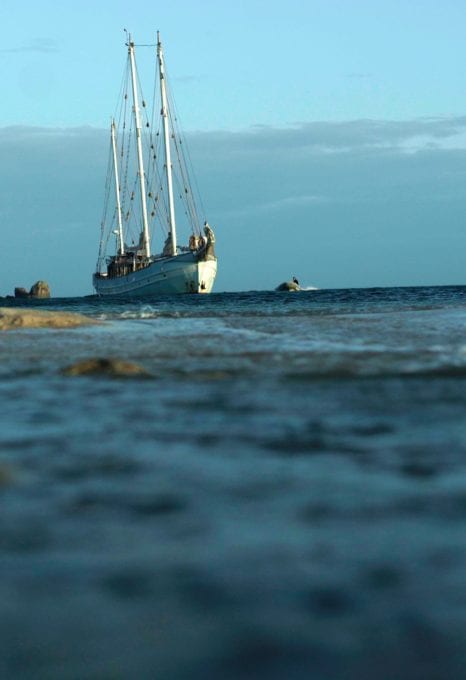 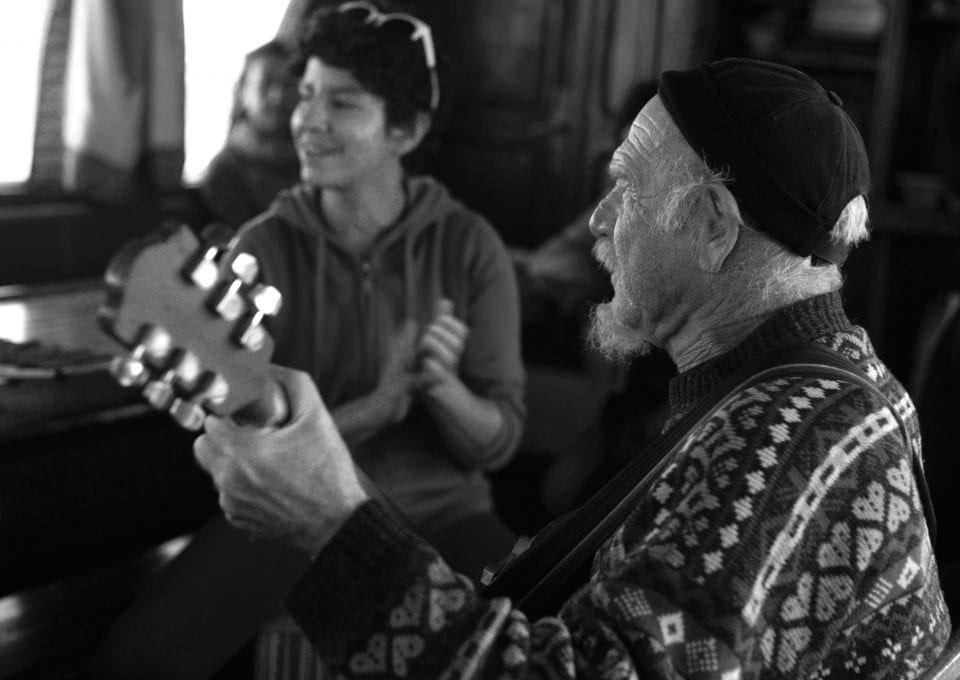 After 16 hours of sailing across the Channel, cycling through the rota of meal preparation, food service, washing up, cleaning and optional watch, we stopped in the Helford Passage to spend a night in a Cornish creek and wait for the wind to turn. The sound of the engine brought people up on deck at 6am to a pale gold summer rain, which drifted down as the boat glided out to choppier waters. Out of the creek, we stumbled our way through raising the jibs, led by the more experienced crew members. Thick spits of foam were cresting 100m away, and the Rara Avis was surrounded by common dolphins and nose-diving gannets right the way up to Land’s End.

As we edged around Cornwall, we didn’t say much to each other beyond a basic, repetitive vocabulary of aquatic mammals, cliffs and the swaying of the schooner. The context of the boat had replaced any need to search for entertainment, and we became plankton, brought by the wind and currents to wherever we were going. There were no provocations, no coups, mutinies or attempts at taking centre stage. None of the anticipated drama from such a varied clutch of egos was taking place, but its absence went unnoticed. The usual distractions of land had been replaced by ropes, duties and collective squinting for fins on the water’s surface. We were content and contained, melded together by the lulling ship and its routines.

We first anchored at Tresco, shuttling to New Grimsby in the RIB, little teams dispatching to the pub, to the beach or to the public gardens. I ran around the island to scout out a good spot to return to for a post-lunch snorkel, and Gimble Porth came through with schools of wrasse and deep, thongweed cathedrals. Walking past the New Inn pub on the way back, we could hear splits of laughter and French expletives tumbling over the garden wall. They had occupied the whole beer garden, letting their personalities accordion out on land, filling back up with air and squeezing out notes of chaos among the pristine hedgerows.

That evening onboard we ate shrimps by the kilo, fished with nets at midnight, and a lobster that weighed more than Yaël, the three-month-old on board. There was also smoked and baked pollock, line-caught over the side of the Rara Avis. 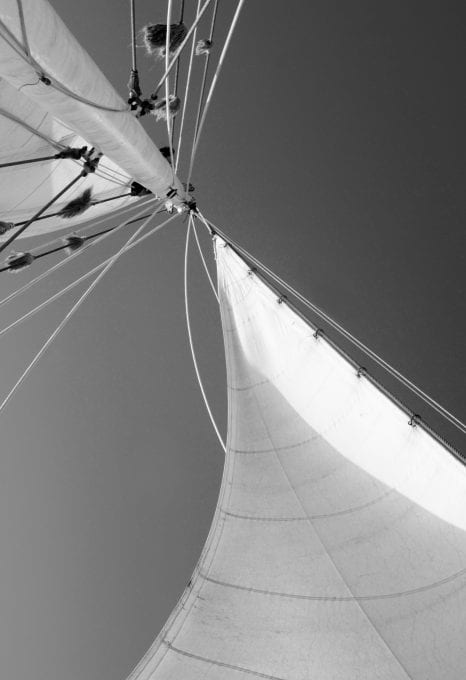 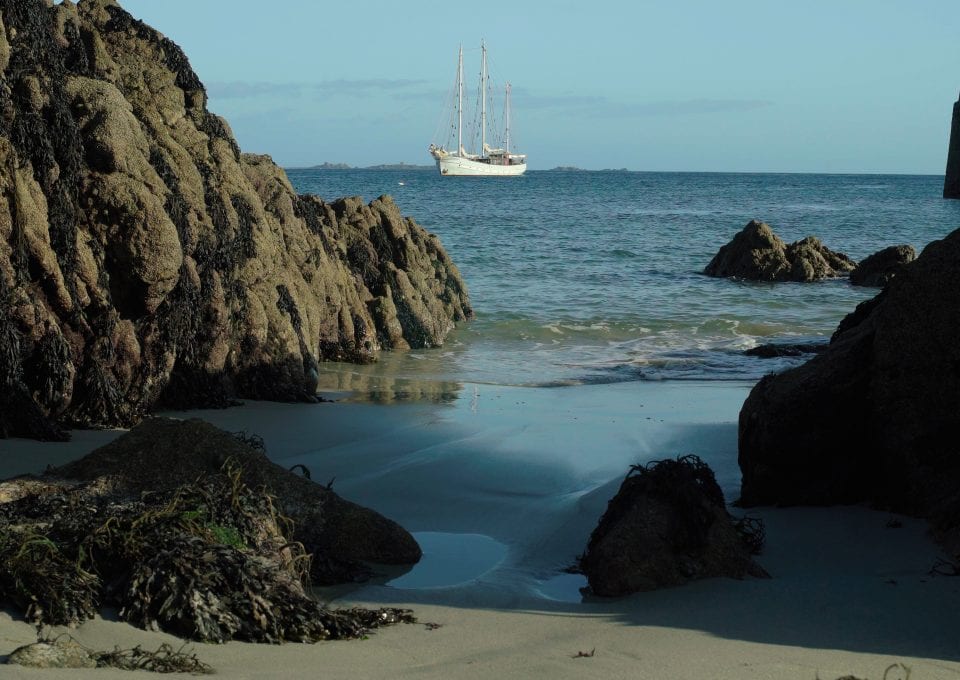 It’s an achievement that 40 people were sustaining themselves on a 38.5m length of wood, floating in the Atlantic.

By day four, we’d anchored off St Martins, and spent the day diving around Great Merrick Ledge looking at comb jellyfish. I started asking myself if we had indeed managed to put the world on a boat. Everything was so familiar and easy, people seemed so in sync with each other and with the Rara Avis and we knew so clearly what was expected of us, that it didn’t feel like real life, where these personalities might have clashed. There were some clear highlights – Captain Poulon pouring someone’s clandestine Ricard into the high seas (it’s a dry boat, so no alcohol on board), the improvised violin-clarinet-guitar orchestra, the experience of a night walk below deck and hearing the roars of snoring in every cabin. But because there was no real conflict, there was no way in which to scrutinise this small sample of society.

I realised, then, that I was looking too hard, peering down a microscope at conversations, weaknesses and movements hoping to find some kind of truth that might also be applicable to every other ecosystem on Earth, something that would give the journey meaning and potency. In actual fact the experience didn’t need this. The bigger picture was much more important.

It’s an achievement that 40 people can sustain themselves on a 38.5m length of wood, floating in the Atlantic. The boat navigated across nations and around islands, powered by wind and human knowledge, taking a course of its choosing with a tiny carbon footprint. All food on board was waste and donation from the surplus of local supermarkets, restaurants or bakeries, and freshwater is created by an onboard reverse osmosis system. The Rara Avis arrived back in Aber Wrac’h, put down the walkway, emptied itself of this round of passengers and filled itself back up again with another 40, continuing to provide powerful memories to everyone on board. The boat never stops, sailing all year either around the French and British coasts during the Northern Hemisphere summer months, or making a transatlantic crossing via the Antilles and New York, primarily helping to fill community gaps in the lives of thousands of disaffected and distracted people. The trainee crew also do shifts in the workshop, learning to build masts, as well as confidence, links and forward-moving motivation. It’s far-reaching, huge-scale, and – despite being tucked away down one of Brittany’s creeks – its impact cannot be underestimated. The Rara Avis writes its own, long-term stories, continuing to bring people together in unexpected ways to form unanticipated bonds.

It’s an achievement that 40 people were sustaining themselves on a 38.5m length of wood, floating in the Atlantic.