Marine biologist Emma Williams researches blue sharks in the Celtic Deep, a stretch of water found off the Pembrokeshire coast in Wales. In this online feature, she tells us about a new, non-invasive method to take blue shark skin swabs which might prove invaluable for the wellbeing of the sharks.

The exciting thing about any trip into the blue is that you never know what you might see. We spent many hours drifting out in the Celtic Deep somewhere between Wales and Ireland, hoping for someone to shout “SHARK!”

Everyone’s eyes are on the water. Aware of every flick of colour and breaking wave. Wondering if it is what we have all been waiting for. As the anticipation of getting a glimpse of the incredible blue sharks grows, your brain starts to play tricks on you, making you see what you want to see. And then it happens. After witnessing these animals’ vibrant colours and elegant movements, you will never mistake them for anything else again. A majestic blue shark (Prionace glauca) has arrived.

You will never mistake them for anything else again.

Despite growing up in the countryside, the fear of sharks had not escaped me. Every now and then, whilst playing at the coast, we would freak out, thinking a shark was going to get us. Fast forward to the present, and I am part of the Celtic Deep and Marine Research and Conservation Foundation (MARECO) team, actively looking for sharks. The first sign of a fin or shimmer of their bodies swimming through the water sends waves of excitement through my body. Rather than running from the ocean at the word ‘shark’, I now find myself running towards it, hoping to get a glimpse of these amazing animals as they go about their business.

This change in mindset from unwarranted fear to an informed love of sharks didn’t happen overnight. Instead, it was slowly built during my early 20’s through increased awareness and personal experience. Like many people, I had what appeared to be an innate fear of sharks. However, I don’t believe this is innate at all. Instead, it’s born from a persistent perception painted by the media depicting sharks as evil, cold-blooded, mindless, man-eating villains that should be feared, or better yet, exterminated. Thankfully, as soon as I learned about sharks, their behaviour, diversity and intelligence, these preconceived perceptions, which turned out to be based more on fiction than fact, quickly began to wash away.

As a postgraduate student during COVID, I struggled to find a research project. Thankfully, collaborating with Celtic Deep and MARECO was the perfect opportunity for me to get involved with shark research in British waters. And it has completely opened my eyes to the incredible wildlife and ecosystems found here. Richard Rees and Nicki Meharg founded Celtic Deep to connect people with the extraordinary marine life found off the Pembrokeshire coast by creating exciting trips that provide opportunities to observe and experience wildlife in its natural habitat. Both Richard and Nicki are true conservationists, actively participating in preserving and protecting the marine world. MARECO, founded by Dr Gonzalo Araujo, works to tackle marine conservation challenges focusing on threatened marine megafauna, such as sharks. Gonzalo accomplishes this using a collaborative multidisciplinary approach, working with different groups from NGOs to academics and governments to the general public.

Together, we are currently developing and building evidence for non-capture methods of studying blue sharks with minimal disturbance. Traditional studies often require the capture of animals which can have adverse effects on their wellbeing. Additionally, a recent assessment by the IUCN Shark Specialist Group reported that blue sharks in the North Atlantic are ‘endangered’. Therefore, the use of novel non-capture and minimally invasive research methods would be favourable.

Traditional studies often require the capture of animals which can have adverse effects on their wellbeing. 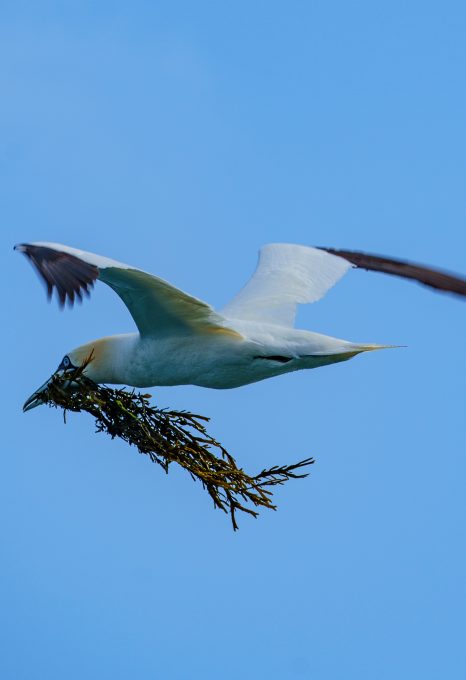 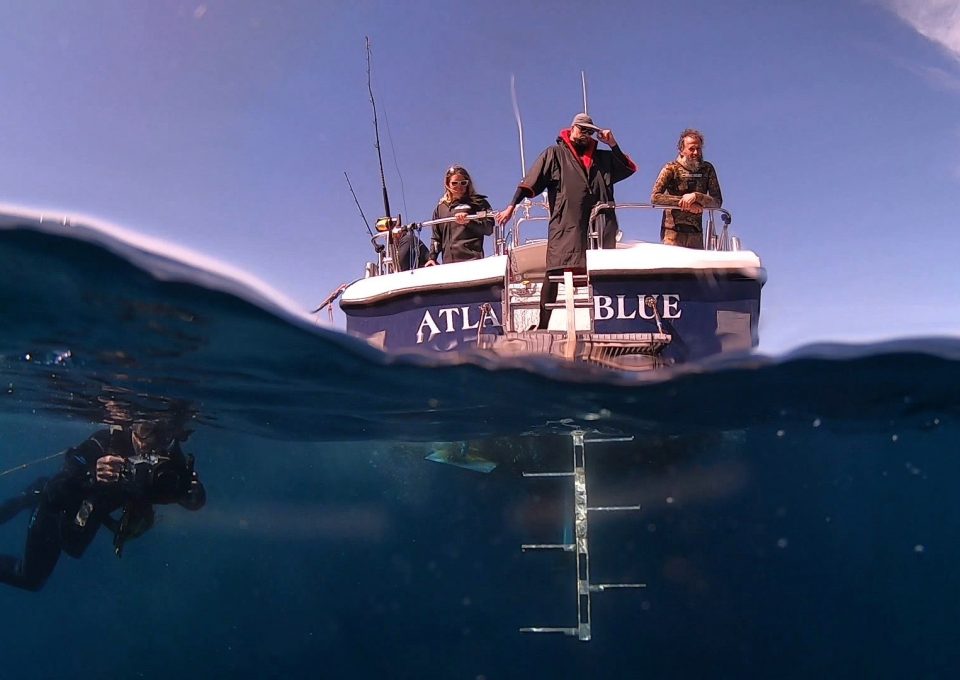 After admiring her beauty from the surface, I grabbed my mask and snorkel, put on my fins and quietly slid into the water. It’s hard to describe the feeling of interacting with such a beautiful animal in its own environment. I was filled with excitement but also calmness as I watched her swim around and check out my fins. Swimming with blue sharks is not simply an observation or fleeting glimpse as they swim by. It’s an encounter, an experience, something that will stick with you for a very long time. It’s rare to have any wild animal express such a genuine curiosity and interest in you as the blue shark. After a few minutes of observing her behaviour and ensuring she was settled, four guests joined me. It’s wonderful seeing people’s faces as they watch the sharks swim around them and the excitement in their voices. It is a privilege to share these experiences with others, watching how the sharks themselves challenge people’s preconceived perceptions.

In oceanographic terms, the Celtic Deep is relatively shallow, but at 100 metres, it is deep compared to the surrounding areas. Coldwater upwellings bring nutrients to the surface, making it a very active region, with common dolphins to fin whales, blue sharks to bluefin tuna, and gannets to sunfish. Despite this incredible diversity, few people know about the animals found around the UK, particularly when it comes to sharks. Sadly, despite the array of life found in this region, many animals are threatened with extinction. The porbeagle, shortfin mako, basking, and blue shark are all listed as either ‘endangered’ or ‘critically endangered’ by the IUCN locally and/or globally. The main threat these large sharks face is commercial fishing. Globally, blue sharks are the most heavily fished shark species. An estimated ten to 20 million individuals are taken annually, and in the North Atlantic 80 per cent of their habitat overlaps with heavily fished areas.

Our lack of awareness and understanding of sharks has led to a dangerous apathy towards them on a global scale. Approximately 100 million sharks are killed each year. That’s over 11,000 sharks killed every single hour. It’s easy not to care about animals that you fear or even hate, but sharks are not something to be feared. On the other hand, the loss of sharks from our ocean is a truly frightening thought.

Our lack of awareness and understanding of sharks has led to a dangerous apathy towards them on a global scale. 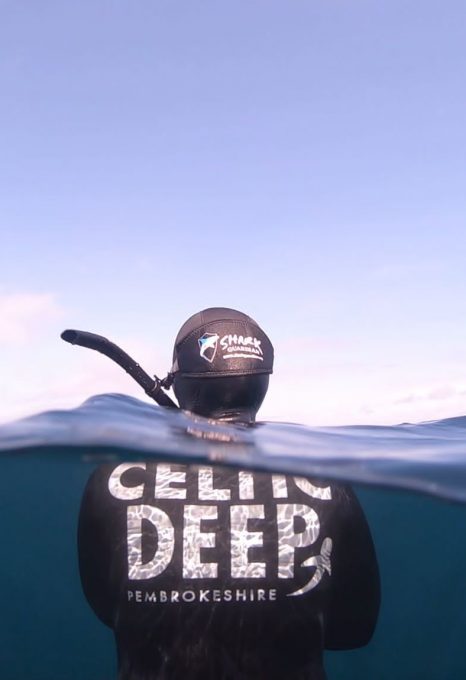 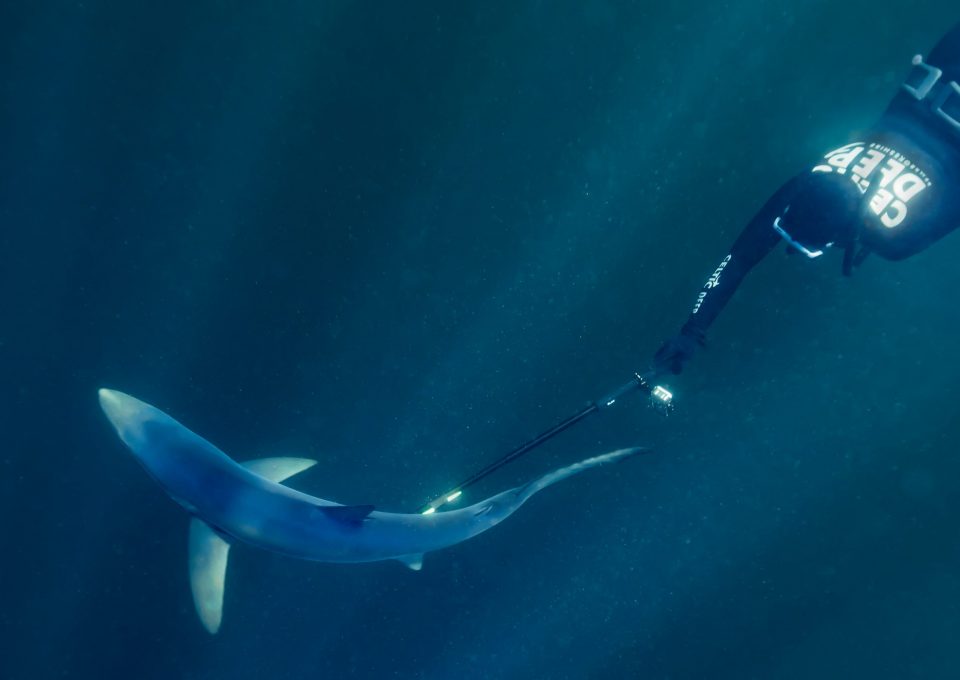 It’s vital that we continue to research sharks because we still have so much to learn. Working with MARECO has provided me with the expertise needed to develop novel research methods. Our new sampling method uses a shallow freedive below the surface to meet the sharks. Here, we collect a quick skin swab using very simple equipment – a toothbrush on the end of a pole. The sharks displayed minimal reactions to the swabs, often twitching and swimming away briefly, only to circle back around again. Once a sample is collected, it is passed back to the team on the boat and put into a preservative. I will be analysing the samples this autumn to determine the success of the method.

However, I firmly believe that research alone is not enough. We must engage and communicate with the public. That’s why organisations like Celtic Deep are so vital. By providing opportunities to interact with sharks firsthand in their natural habitat, you create experiences capable of altering people’s perceptions of sharks, leading to greater empathy, support for conservation and public outrage over the irresponsible depletion of sharks. As Baba Dioum said: “In the end, we will conserve only what we love, we will love only what we understand, and we will understand only what we are taught.”

Sharks shouldn’t be feared! They are also not cuddly puppies! They are highly evolved predators in their own right, and their elegance, intelligence, and power demand respect. However, you can have safe encounters with sharks by keeping activities within the boundaries of respectful interactions. I am so pleased that these experiences have become available in the UK in recent years. Still, it’s crucial that operators are responsible, knowledgeable and promote passive interactions with wildlife. And that’s what Celtic Deep do.

In addition to research, it’s important to have people out on the ocean recording wildlife sightings. As for other animals, climate change is a concern for sharks. Although the impacts on sharks aren’t yet understood, we are already witnessing changes possibly attributed to climate change. For example, this season, we had a colder than usual spring, which we believe may have altered the typical migratory timings leading to the late arrival of the sharks. Followed by an abnormal algae bloom, which may have further displaced the sharks causing them to stay deeper or use other areas. If conditions keep changing, sharks could be displaced to less favourable habitats, which could impact the use of critical sites, including feeding and pupping sites. Spending time at sea gives an opportunity to record sightings and highlight any observed changes in animals’ behaviour and movement patterns early.

This season, we had a colder than usual spring, which we believe may have altered the typical migratory timings leading to the late arrival of the sharks. 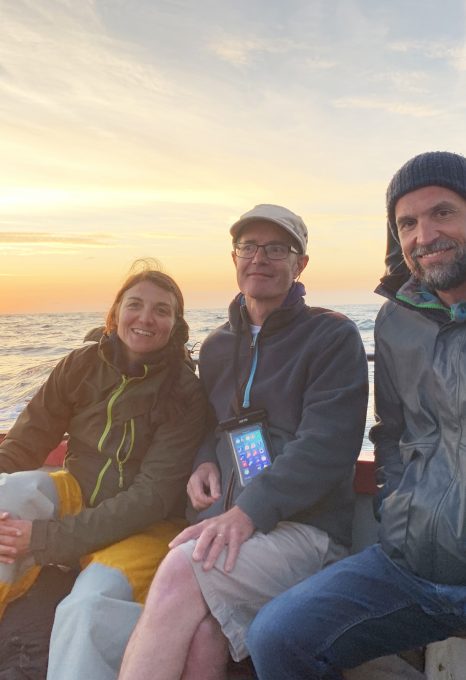 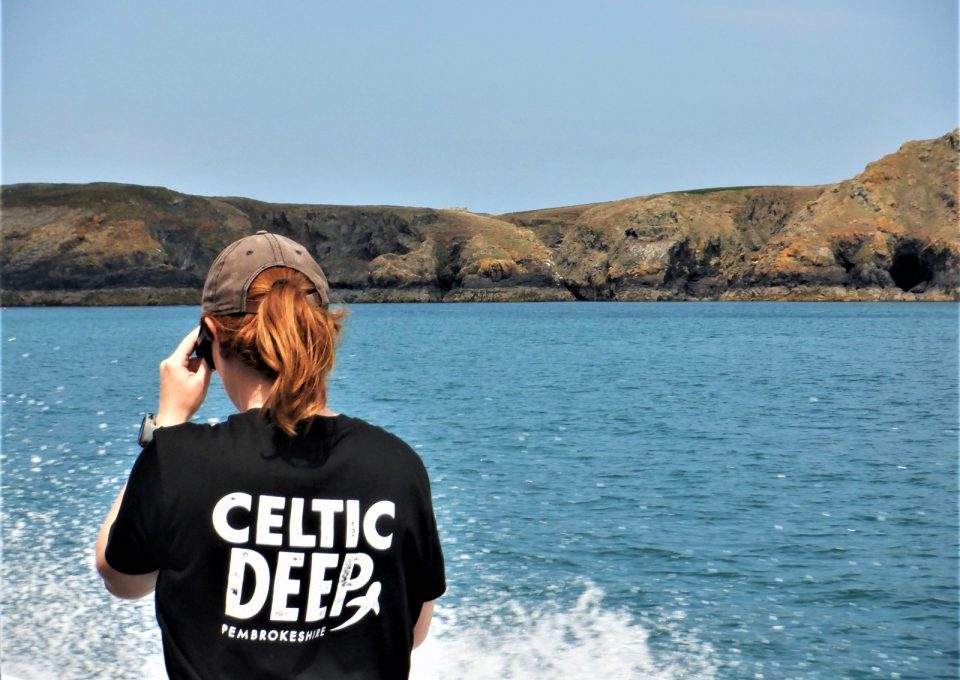 I cannot wait to get back in the water with these beautiful animals and show more people the true nature of sharks. Meanwhile, the research will continue in the lab analysing the samples. We hope to replicate our methods on other threatened megafauna, particularly in regions with highly restrictive biopsy permits or limited access to expertise and resources. If the findings allow, we will expand our study to address population and conservation genetic questions without capturing the animals. All while using a modern approach to answer traditional questions.