The small coastal town of Cabo Pulmo in Mexico has a big conservation reputation, an abundant underwater haven returned from the brink. How was such success achieved?

As our panga cuts through the shimmering waters of the Sea of Cortez, the distinctive, oily scent of fish hits my nostrils. The source of the aroma is soon revealed, as I don scuba equipment and backroll beneath the waves: a shoal unlike any I have seen before, so gigantic its presence can be smelt from the surface. Mainly comprised of bigeye jack, the school extends further then the eye can see, even with excellent underwater visibility. Twenty metres down, I look up to find the sky blotted out by a ceiling of trevally, their metallic bodies moving in unison, creating a tornado of stern-faced fish. In the heart of Cabo Pulmo National Park, this unforgettable scene is an irrefutable reminder of why a small, Mexican coastal village has become a global poster child for marine conservation.

The headline stats make it look simple: Cabo Pulmo National Park was founded in 1995 with a 100% no-take policy implemented. From 1999 to 2009, fish biomass increased by 463%. It’s a sensational success story, carried by news outlets around the world, and yet, for those who lived and breathed it, the story of Cabo Pulmo is far more nuanced.

Sitting at the southern tip of the Baja California peninsula, the road to Cabo Pulmo weaves through a mountainous, desert landscape, with alluring views of the coastline winding in and out of sight. Coming off the highway, the final stretch takes you along a bumpy, dirt road: an appropriately low-key entrance to the humble village of Cabo Pulmo, where the trappings of mass-tourism are still held at bay. The desert landscape gives way to an idyllic beach, and the surrounding sea frames it all, its water offering the chance to cool off from the arid heat. In his ‘Log From the Sea of Cortez’, John Steinbeck reserved special praise for the area, writing:

“The complexity of the life pattern on Pulmo Reef was even greater than at Cabo San Lucas. Clinging to the coral, growing on it, burrowing into it, was a teeming fauna. Every piece of the soft material broken off, skittered and pulsed with life, little crabs and worms and snails. One small piece of coral might conceal 30 or 40 species, and the colours on the reef were electric.”

Indeed, this bay is home to the oldest coral reef on North America’s Pacific coast, one of only three such reefs on record. 20,000 years in the making, the corals adorn enormous mineral fingers that cross the seabed. The colours are more understated than those found on reefs in south-east Asia, with muted, earthy tones, befitting the location. Hundreds of small, terracotta sea fans cover the rocky reef, their pattern broken up by the magenta sea fans in their midst. Curious Mexican hogfish explore the seascape, with puckered mouths and a paintbrush tail trailing behind.

This is an extraordinarily productive sea, and fishing was a central part of life for the community in Cabo Pulmo, but in the second half of the 20th century, advancements in refrigeration, motorised vessels, and fishing techniques would change everything. Modern methods were adopted locally, but also by an armada of industrial fishing ships. The next part of the story is one oft repeated around the globe: soon enough, the sea had been plundered at an unsustainable rate, and Jacques Cousteau’s description of the Sea of Cortez as the “aquarium of the world” was no longer fit for purpose. The residents of Cabo Pulmo, now forced to travel further offshore and with only meagre returns to show for the arduous journey. It was a precarious existence, but a few visiting divers offered an idea for a different path. If people would pay to be taken out to explore these dilapidated reefs, what could be achieved if the aquatic environment was restored? The rumblings of change began in the eighties, with residents and university researchers pushing for the benefits of tourism and protected waters. 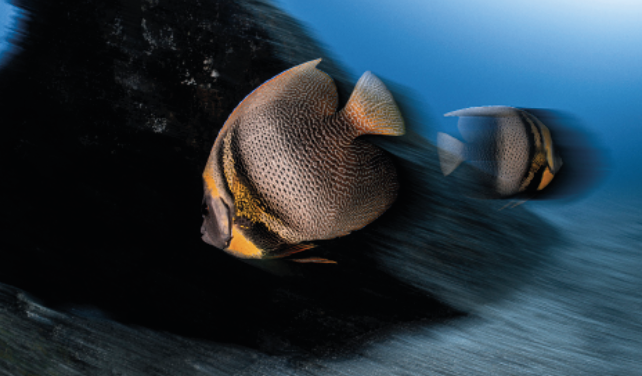