When it comes to saving a species on the brink of extinction, it takes collaboration, creativity, and unwavering commitment. The work of a student-run film collective shows how Hawaiian communities have creatively come together to save the last remaining Hawaiian monk seals.

When it comes to saving a species on the brink of extinction, it takes collaboration, creativity, and unwavering commitment. The work of a student-run film collective shows how Hawaiian communities have creatively come together to save the last remaining Hawaiian monk seals.

“It’s crazy because we would be doing these dives and we would see monk seals diving in those places that are severely impacted by marine debris and hazards in the water. It makes sense why that’s one of the biggest threats to these animals,” says Lauren Chamberlain, marine programmes manager at Hawaii Marine Animal Response (HMAR).

Endemic to the Hawaiian archipelago, the Hawaiian monk seal is found nowhere else in the world. They are predators in the marine ecosystems of the islands and balance a healthy marine food web. As one of the most endangered seal species in the world, the most recent population estimate revealed there are only 1,400 individuals left globally, meaning the species is teetering on the edge of extinction.

Marine mammals such as Hawaiian monk seals are long-lived. Therefore, they are slow to recover as a population. Yet, experts do believe their numbers are on the rise with the population growing “at an average annual rate of 2% since 2013”. This positive trend can be associated with management strategies employed by governments, local nonprofit organisations, and research institutions. And this commitment becomes clear when you understand the passionate groups on the frontlines of saving the endangered Hawaiian monk seal.

With less around 1,400 seals left in the world, a student-run film collective aiming to tell environmental stories across the world through docuseries, called Outspoken Narrative, and a local conservation media company working to conserve our oceans through education, media, and empowering communities, called The Conservationist Collective, teamed up to give a voice to this species by producing a film that highlights the dedicated individuals working to save this species in Hawaii.

The most recent population estimate revealed there are only 1,400 individuals left globally. 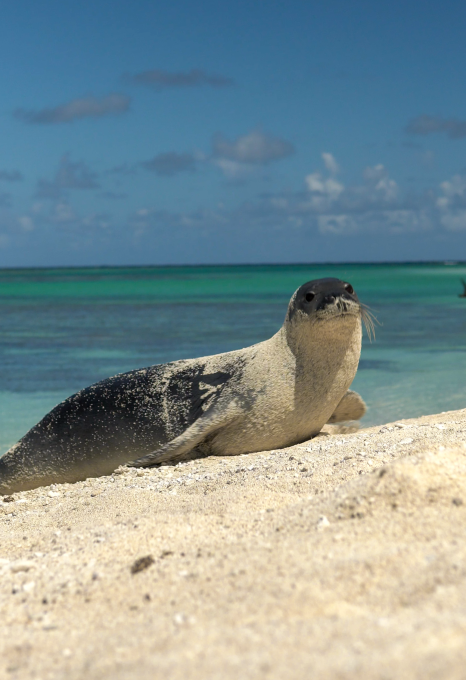 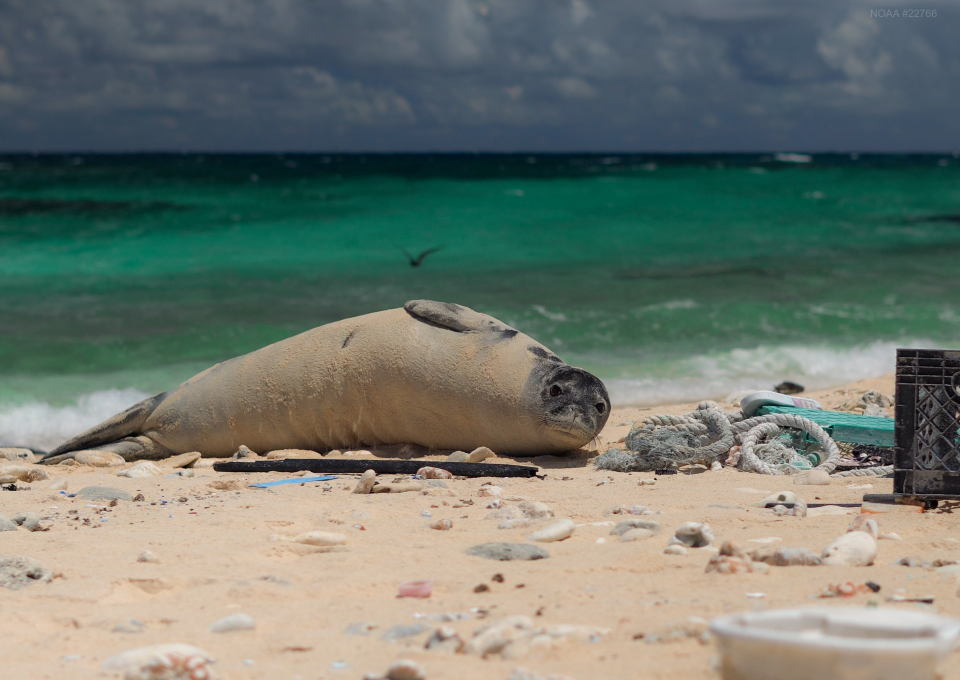 Telling the stories of wildlife extinction never gets easier. When it came to the Hawaiian monk seal, with only 1,400 individuals left in the entire world, we knew this story needed to come from those on the frontlines saving the species. From invasive species to marine debris entanglement, the Hawaiian monk seal continues to face numerous threats.

The film educates viewers on the primary threats to survival facing the endangered Hawaiian monk seal, and they are many of the same threats harming marine life around the world. Threats like entanglement in marine debris and derelict fishing gear, disease transmission as a result of invasive species, and changing oceanographic conditions such as sea level rise washing away essential habitat needed for rest and reproduction all contribute to survival challenges for this species. And there is one common thread connecting all of them: human activity.

“The biggest threat to Hawaiian monk seals is just simply human impact,” points out Chamberlain. Toxoplasmosis, a disease that stems from infection with the Toxoplasma gondii parasite that commonly can be found in domestic cat feces, is one of the main killers of the seals. Other threats include habitat loss, food limitations, the ingestion of microplastics and entanglement. “Hawaiian monk seals actually have the highest entanglement rates of any pinniped or seal species due to the mass number of marine debris and derelict fishing gear found in the South Pacific,” says Alex Filardo, field researcher, in the video. 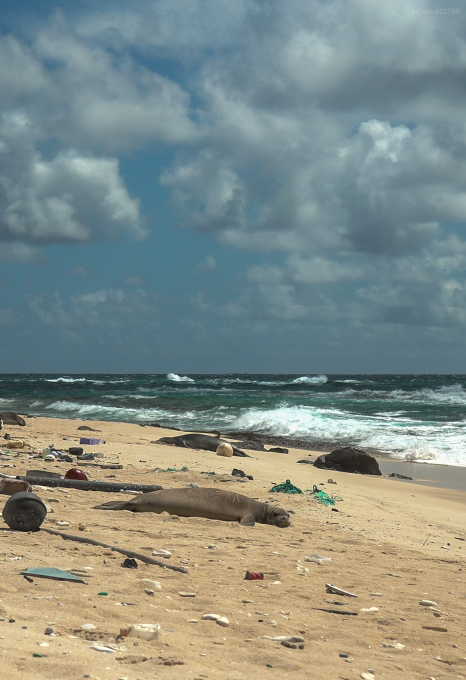 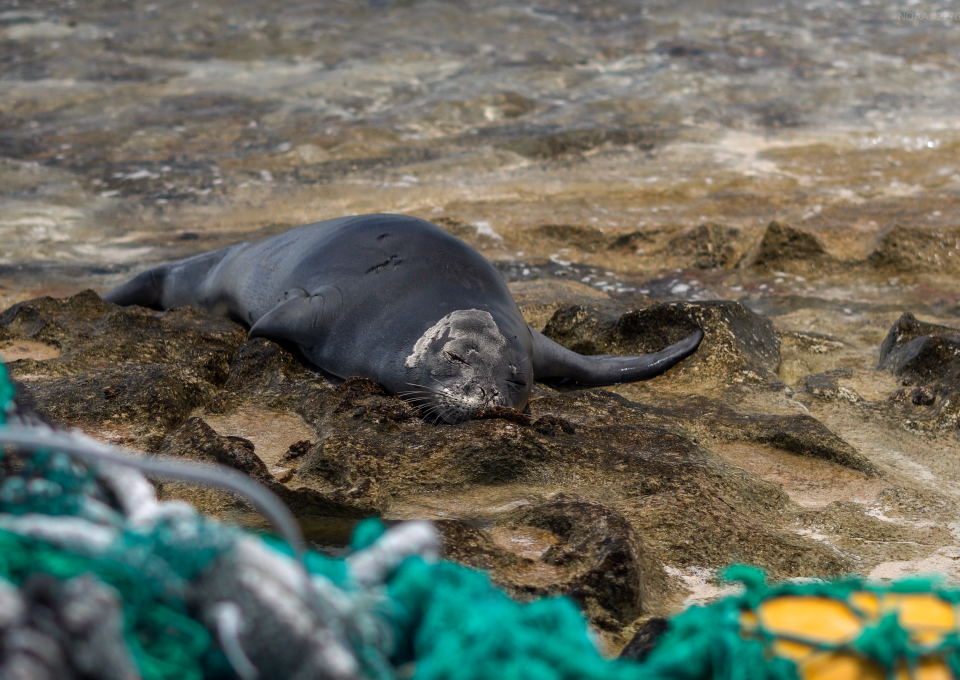 The earless seal in the family Phocidae is culturally significant to the people of Hawaii and is also mentioned in the Kumulipo, the Hawaiian creation chant. In Hawaiian culture, a name is often considered a sacred extension of a person’s identity. That’s why the Hawaiian community is greatly involved in the amplification of Hawaiian monk seals. An example of this can be seen in classrooms across the islands: Here, students get the task of naming new monk seal pups. They therefore give individual pups important identities that are used by photographers and monk seal enthusiasts for years to come.

As there is a wealth of individuals, scientists, animal rescue responders, and field researchers working on protecting the endemic species, Hawaiian monk seal numbers have recovered in recent years. As an example, every year, the National Oceanic & Atmospheric Administration leads field camps at Hawaiian monk seal protected habitat within Papahānaumokuākea Marine National Monument to monitor, assess, and survey the seal population. This annual programme has been integral in understanding the growth of the population, and what threats continue to reach remote, protected regions.

On the main Hawaiian Islands, nonprofit organisations such as Hawaii Marine Animal Response work year-round to respond to seal sightings, educate the community, and support interventions of at-risk seals. Researchers at the UH Marine Mammal Research Program are advancing our understanding of the species and use their findings to inform conservation management for future seals. The film highlights PhD candidate Kirby Parnellʻs work on underwater seal acoustics to assess how man-made noise can impact the species, a topic never studied before in the wild. Each of these efforts play a key role in a recovery strategy, giving Hawaiian monk seals their best chance at long term survival.

Students get the task of naming new monk seal pups.

The Hawaiian monk seal is just one species on the brink of extinction as a result of our actions. But in the same vein, countless species have also been brought back from the brink of extinction thanks to the invaluable work happening every day throughout the world. Their survival hinges on the actions of all of us, and those committed to protecting every individual seal.

The story of the Hawaiian monk seal is one of community, commitment, sound science, and resilience. We hope it reminds you of what can happen when passionate groups of dedicated people come together around what they believe in, including saving a species.