By far the most unusual and enigmatic fish to live in the sea is the seahorse.

As the early morning light filters its way down into the shallow depths where this little creature lives amongst weeds and rocks, the male is on the lookout for its mate. Hidden from prying eyes, the enigmatic, almost shy seahorse looks out from its ocean hideaway assured that it’s cryptic camouflage will hide it from even the most determined predator.

I have spent the last 42 years studying seahorses around the world, and yet, I still find them to be one of the most extraordinary creatures to dwell in the ocean. In 2000 I set up The Seahorse Trust, not just to look at seahorses but also the marine world as a whole. It was founded by my wife Maxine Garrick-Maidment and myself after we co-designed and built two public aquaria, including our own in Exeter, Devon in the south of England, which we closed to join the team at the National Marine Aquarium in Plymouth, UK. Funding for the Trust’s work comes from donations, grants and a membership and seahorse adoption scheme.

Key to the success of The Seahorse Trust is our partnership approach and with this in mind we set up the Seahorse Alliance to bring together like minded organisations and projects all over the world. We now have links to 33 countries worldwide and are starting a new project in Jordan, in the autumn of 2019. Currently, we’re partnered with projects in Bermuda, Malta, Peru and Spain that are recording data. This is crucial due to the fact that information about these creatures is relatively scarce. For example, of the five species of pygmy seahorses currently on the IUCN Red List of Threatened Species, four are categorised as Data Deficient.

Maxine and I think it is important to look at the natural world as a whole and not just individual species. With this in mind, the Trust advises and runs a number of projects in the UK and abroad looking at the habitats seahorses live in, the various species that live there and the problems facing them. Predominantly, the problems they face are human-related – habitat loss, trade for curios, pollution, overfishing, bycatch and rising water temperatures all play their part. Of the few statistics that are available, one particularly shocking figure is that of the wild population of the Knysna Seahorse. It’s primary habitat, the Knysna estuary in South Africa, is a body of water heavily-used by humans. This species, that went from vulnerable status to endangered in 2000, is inferred to have declined by at least 50% in the past 10 years.

They are truly unique in the animal kingdom. Each and every morning the male seahorse patiently waits in his small territory for his partner – many species are seasonally monogamous – to arrive after sending out a chemical message of pheromones. By pumping his brood pouch, the pheromones seep into the water, drifting on the current and let the female know the male is waiting to start their shimmering courtship display that will reinforce the pairs’ bond for the breeding season.

I have spent the last 42 years studying seahorses around the world, and yet, I still find them to be one of the most extraordinary creatures to dwell in the ocean. 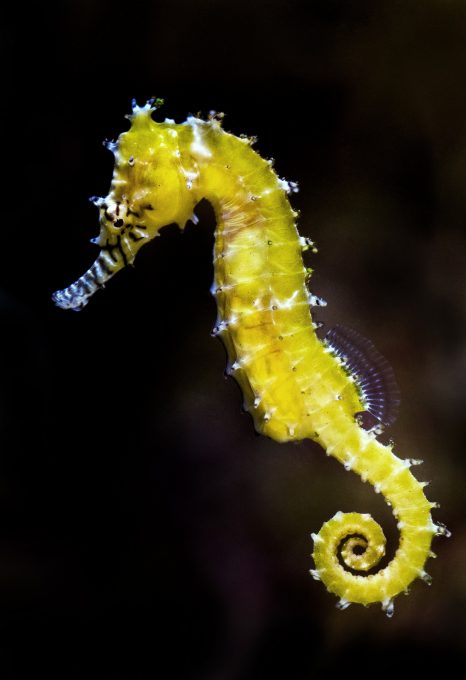 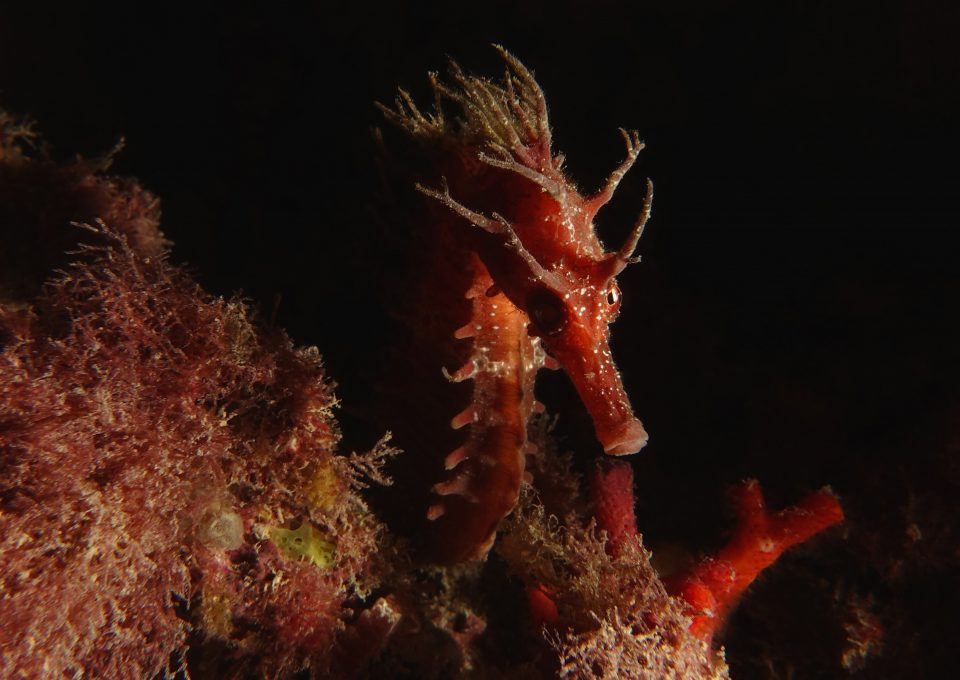 If the male has given birth during the night to his 300-500 fry (babies), it will be a call to the female to impregnate him again with her eggs through an ovipositor as happens every 14-28 days (depending on the species) in the UK.

The female drifts in from her wider territory, which overlaps the male’s, and as soon as they catch sight of each other they start to change colour and copy each other’s postures. The female dips her head down, a move mimicked by the male as he circles around her with a shimmying motion; as they slowly circle they lighten their colour and move with ever increasing vigour.

This beautiful dance can go on for up to or over an hour but at the peak of it, if the male needs eggs, they will rise in the water column together oblivious to the potential danger from predators, spiralling as they rise.

At the height of the dance they will face each other and the female, through her ovipositor inserted into the males brood pouch will deposit hundreds of eggs in a matter of seconds and then suddenly, the dance ends, once the eggs are in the brood pouch, the pair part from each other with the male dropping to the seabed as the female drifts away until the following day when the whole process starts again.

As the male sinks to the seabed he self-fertilises the eggs within the pouch and can be seen wriggling from side to side as the eggs get embedded into the lining of the pouch, where they will be nurtured. They also have the remnants of a yolk sac, a nod back to the days of being ‘ordinary’ fish – but they are far from ordinary.

It is not long after this that the pair start to feed again; in a 24-hour period each adult seahorse can eat a staggering 65-70 adult Mysis shrimp through their snout. Despite having no teeth the Seahorse is a formidable predator and will suck in shrimps from up to two inches away using a sophisticated siphon-like system through their snout and gills. This system is so powerful the shrimp disintegrate as they are sucked in, often with bits of shrimp being blown out of the gills looking like puffs of smoke; a possible source for the myths of dragons, a shape they greatly resemble.

Seahorses are, amongst other things, survivors. They have been around for tens of thousands of years and have adapted to extreme environments and often hostile waters. Before the onset of winter they move from the shallows into deeper water and overcome the harsh winter storms in what appears to be the most hostile of environments, with eyes that see in full colour in the shallows and black and white at depth – even in low light levels they are still formidable predators.

Seahorses are, amongst other things, survivors. They have been around for tens of thousands of years and have adapted to extreme environments and often hostile waters. 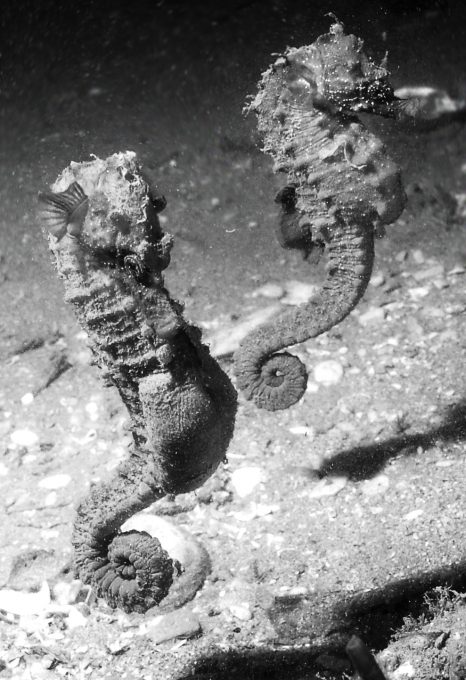 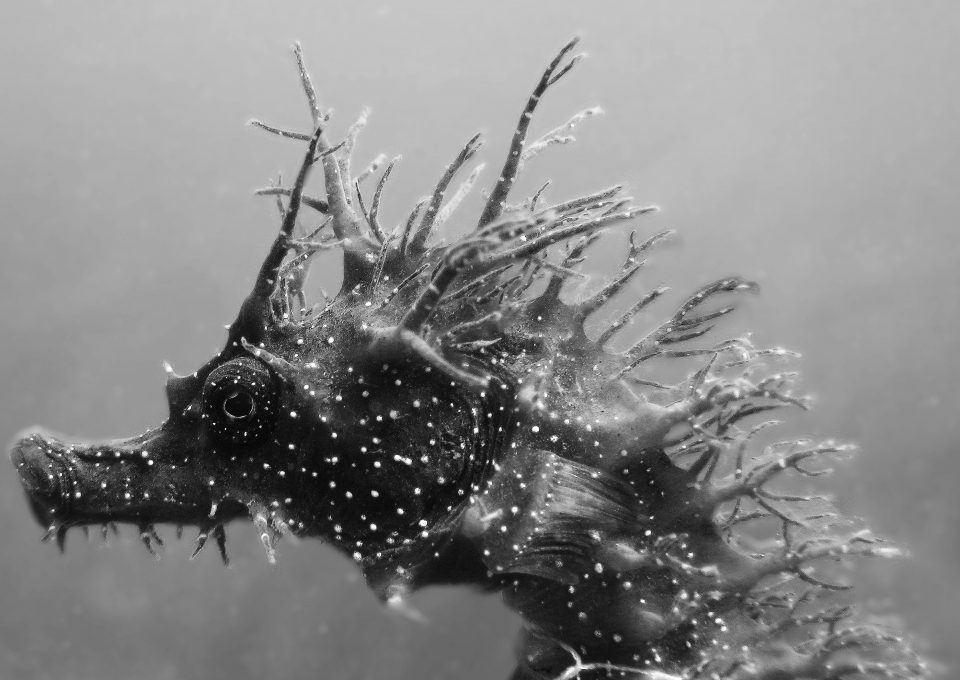 Victorians mistakenly thought seahorses to be insects because of their hard skeletal like bodies that are formed by bony plates under the skin.

But these incredible fish are being predated and disturbed by another more ruthless hunter, mankind. Every year humans pluck more than 150 million seahorses from the wild to satisfy a demand for traditional Chinese medicines and for the seaside souvenir trade where they are made into ‘ornaments’. Even the seahorse, with its phenomenal breeding ability, cannot overcome the odds and they are going extinct during our life time and could be gone in 25-30 years.

Although I’ve studied different species all over the world, I find those native to the UK especially enchanting. The UK and Ireland are home to two species of seahorse, the spiny seahorse (hippocampus guttulatus) and the short-snouted seahorse (hippocampus hippocampus), two very distinctive looking species that can often be found in the same areas all around the coast of the UK. These species are under threat too, despite their protected status – human activity off the Dorset coastline is having some worrying effects on the resident marine life.

These two British seahorses are fascinating and we are learning a great deal about them through the British Seahorse Survey, which is run by The Seahorse Trust. It was started in 1994 and is the longest running survey of its kind in the world; this longevity has allowed us to build a unique picture of these incredible fish. The survey is reliant on the kindness of others to send in their sightings. We’ve received information from public aquariums, divers, fishermen; the general public and through researching historical records.

Through our work at The Seahorse Trust and thanks to our huge team of volunteers, British seahorses were fully protected in 2008. We are able to work with and share information with other organisations all around the world. This allows for a greater understanding of our oceans and helps us to make a better future for all the amazing species that share our oceans with us.

Humans know very little about what lies behind the seahorse’s charm and grace. The Japanese name for Seahorse ‘tatsu no otoshigo’ means ‘dragon’s child’ and this gives just a little hint of the awe and mysticism that seahorses are held in.

But that same awe and mysticism has put them in danger – only one in 1000 seahorses survive more than six weeks, despite the fact that they can have a lifespan of up to 12 years. This is why we’re so dedicated to our work with The Seahorse Trust and hope that others can support us. Members and donors know that they are directly helping one of nature’s most enchanting species, 42 of which feature on the IUCN Red List of Threatened Species.

Seahorses belong to a group of fish that are called Hippocampus; their name is an anomaly, as ‘Hippocampus’ literally means ‘horse caterpillar’ or ‘Horse monster’, they were named by the Victorians who mistakenly thought them to be insects because of their hard skeletal like bodies that are formed by bony plates under the skin.

With a head like a horse, a tail like a monkey, the ability to change colour like a chameleon and to grow weed-like appendages on their body, seahorses are undoubtedly one of the most unusual creatures discovered.

Victorians mistakenly thought seahorses to be insects because of their hard skeletal like bodies that are formed by bony plates under the skin.