We are searching for the sounds of the ancient roamers, those who carry the power and gentleness of the sea. This is the story of serene giants found in Florida: Manatees.

When we listen to the sound of the seagulls and breathe in the salty air as we stroll along the beach, we sense a sweet balance of chaos and peace. Many of us come here for moments of pure bliss and a serene environment. Instead of hearing the daily sounds of wildlife, we have become accustomed to the persistent noise of boat engines, dredging, whistling, sonars, water parties, cruises, and the list goes on.

Manatees and dugongs, also named sea cows, are endangered species that belong to the scientific order of Sirenia. This order is made up of aquatic, herbivorous mammals that are mostly found in habitats such as coastal marine waters, rivers, estuaries and swamps. Here in Florida, our manatee is a subspecies of the West Indian manatee. When we think about the words ‘siren’ and ‘sirenian’, we imagine long tailed mermaids. Also known as the elephants of the sea, Sirenians are not mythological creatures that roam the oceans. They are real. They have purpose on this earth and we must take action in protecting them in order to allow them to thrive.

Busy coastal city life means endless cruise ships, fishing, boat parties, and water sports: the dream life for humans, but not for mammalian counterparts. Manatees love a good life as well. When it comes to eating, they can spend up to eight hours a day grazing on seagrass and other aquatic plants. Seagrass forms important ecosystems in coastal areas around the world, and seagrass meadows around the world have been suffering deterioration due to pollution and runoff that causes the notorious issue of eutrophication. As fertilisers filled with nitrogen and phosphorous leach into our waterways, the overwhelming growth of algae becomes an unavoidable dilemma. Algae thrive off of these two elements and take all the oxygen out of the water as a result of this growth. Other organisms become enriched in algae and sargassum while not being able to properly respirate and find food. This causes a cascading effect up the entire food web. 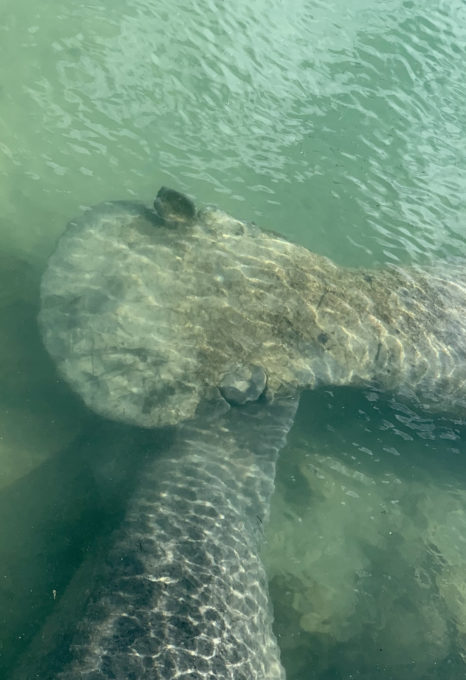 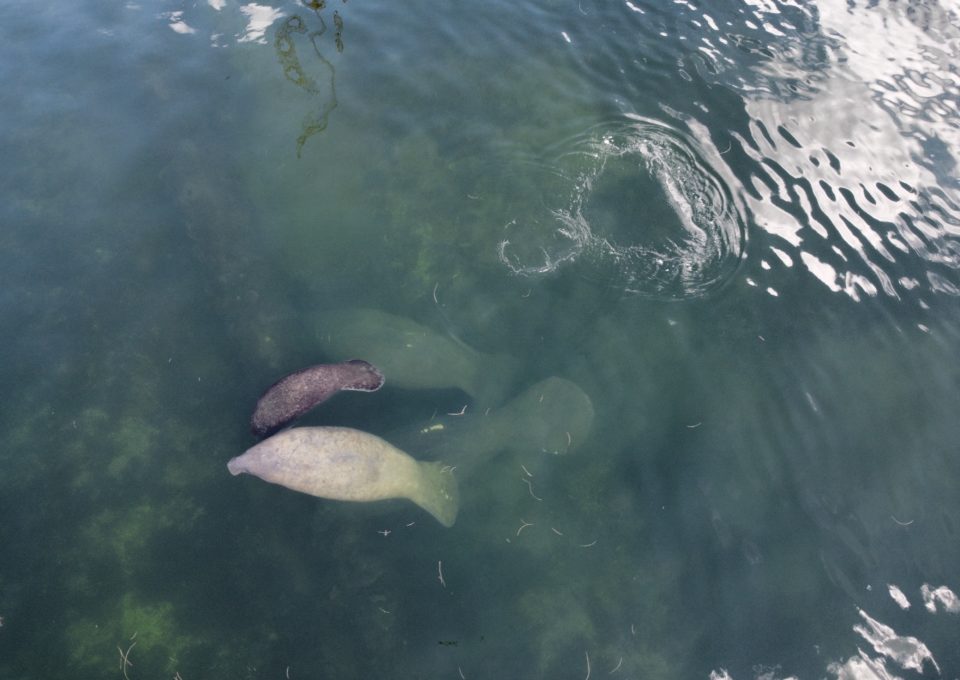 From a local perspective, the natural deterioration of our ocean is obvious. We both can remember days snorkelling through Key Biscayne with its thriving seagrass meadows filled with urchins, star fish, queen conch, colorful fish, and, of course, manatees. Fast forwarding to ten years later, at the age of 23, Bryce has witnessed more styrofoam than crabs and more sargassum than actual water in many areas. The deadly effects of eutrophication and water pollution are evident in the overwhelming growths of seagrass that clog our ocean’s surface in intertidal zones and make the waters impenetrable to the human eye. Oxygen supplies are at an all-time low as many water-breathing organisms struggle to respirate while performing their daily activities such as roaming for food. At the same time, our mammalian counterparts such as the dolphins and manatees struggle to find sea grass that isn’t saturated in algae or devoid of any life.

Adult manatees can reach a maximum speed of 19 miles per hour in short bursts: not nearly fast enough to escape the threat of an oncoming boat. There are vessel speed regulations placed in South Florida and manatee zones that must be respected in order to protect these gentle and slow-moving species. Despite these regulations, many manatees have been found to have severe boat strikes and injuries on their bodies. That’s why we have filmed not only the dangers manatees are facing but also the beauty these gentle giants represent as the serene creatures of the sea.

Manatees have also been largely affected by the increasing plastic waste and water pollution in South Florida. Tourism has reached its peak, impacting cities like Miami and Fort Lauderdale both economically and environmentally. The high demand for luxurious coastal developments has brought in crowds from all over to the world increasing rents and coastal construction of looming apartment buildings and entertainment venues. This has affected both our local residents and wildlife alike. As rents soar and many service workers are not able to afford a stable home, wildlife populations are being pushed out of their native territories as well. This is where we decided to take initiative and help the community and companies with their impact towards their environment, from both the ecological and economic perspectives. We formed a company called Green Life Visions in order to help firms, corporations, and people meet the evolving requirements and market pressures. Humanity has the largest impact towards the planet with our daily decisions and routines. Changing our perspective and lifestyle choices will benefit and assist our planet and its path towards healing. Every item we purchase can either contribute to climate change or help humanity and our wildlife. It’s about making the right decisions for ourselves, others and the planet.

As rents soar and many service workers are not able to afford a stable home, wildlife populations are being pushed out of their native territories as well. 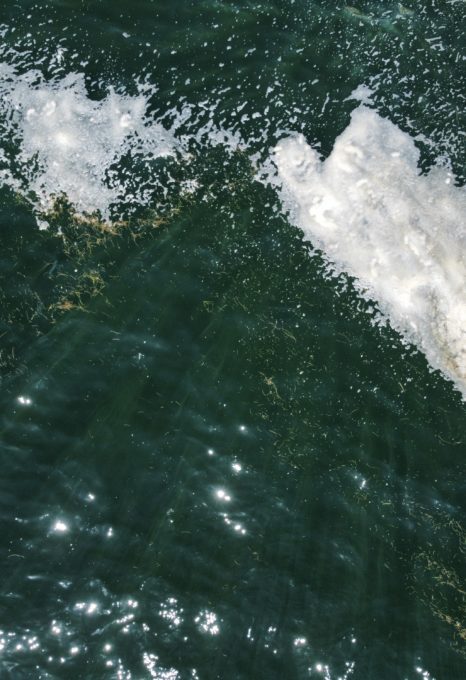 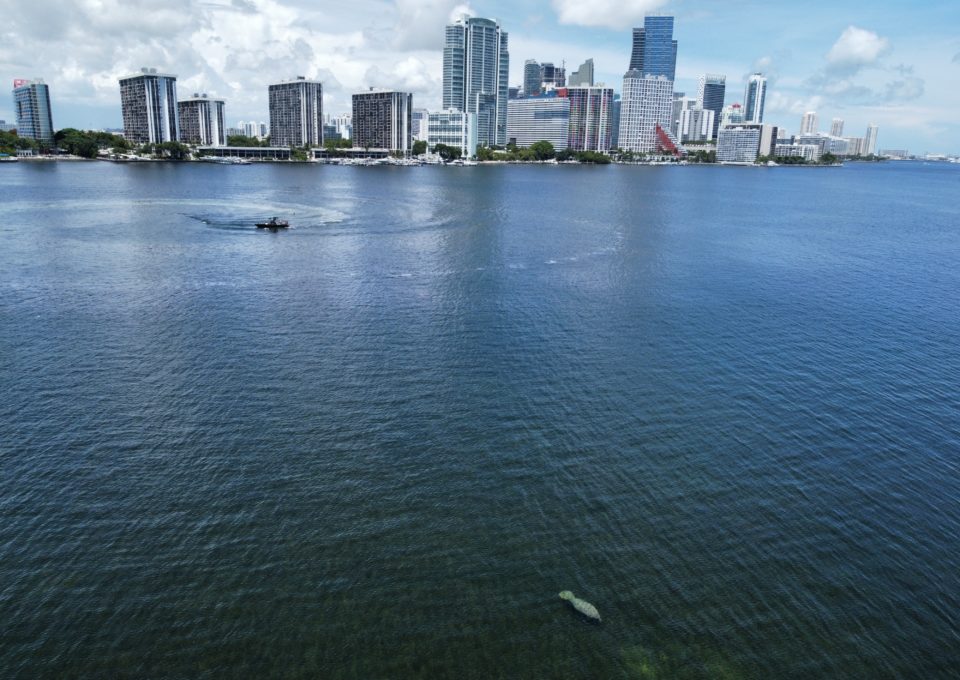 We love living near the ocean, yet we do not care about preserving it.

Coastal development is one of the leading causes of ocean ecosystem degradation. The majority of society has a preference to live in close proximity to the ocean. This is quite the paradox: we love living near the ocean, yet we do not care about preserving it. Our ecological footprints are so massive that we cannot even fathom the depth of the effect our daily activities have during construction. A prime example can be seen in Biscayne Bay. While scouting for marine life and visually surveying the ocean floor, Francesca witnessed gargantuan structures resembling what looked like pillars from large apartment buildings or highway bridges. Perhaps an infrastructural city project gone wrong or covered up?

It is important to showcase the effects we are having to our planet and our manatees; drone photography, such as through films of our project Fran7Films, has allowed us to be a higher witness to the unseen and to the caring moments shared from these serene mammals: the manatees. We must not interfere with wildlife and its life-course; we must let life happen without worrying about the outcome. When we are in stillness and flow, we can experience life in a higher measure, balancing both the chaos and serene times. May we continue to raise awareness of these gentle yet grand sea animals while protecting their habitat and, most importantly, our world. Sirenians depend on us to take the lead in being good stewards and create a better future for this next generation.

We love living near the ocean, yet we do not care about preserving it.