Staring into the eye of a sperm whale is a powerful experience.

My first interaction with a sperm whale was when I was just two years old. A young whale had stranded on the beach near my home in Long Island, New York, and a group of veterinarians decided to bring this whale into a nearby boat basin to get a closer look at him and determine if they could help him. The young whale was nicknamed Physty, a play on both the scientific name of sperm whales, Physeter macrocephalus, and on his seemingly feisty personality. Physty was approximately 25 feet long and was probably somewhere between five and seven years old when he found himself gravely ill and in the shallow waters of coastal Long Island. He stranded twice before the rescue team brought him into the basin for a closer look. While the veterinarians and rescuers were standing vigil thinking at any moment this creature from the depths was going to die, the scientists were also trying to determine what was wrong with this whale and why he had left his family unit, or was left by his family unit, ending up on the beach. It was determined that Physty had pneumonia and eventually, he was fed squid packed with antibiotics, and slowly started showing signs of improvement.

During this time, Physty was in captivity for nine days and people could go to visit him to see his progress. In the early days he simply wallowed, but as his condition started to improve, he started to swim around the boat basin. I was immediately captivated when my mother took me to visit him. I will never forget the first time I looked into Physty’s enormous eye and he looked back at me. It is one of my earliest memories and remains as vivid today as it was then. Here was an enormous mysterious creature that came from the depths of the ocean. It made me wonder, what else could be in the ocean’s depths? In that moment, I was hooked – the ocean and its conservation has been my life’s mission ever since.

He stranded twice before the rescue team brought him into the basin for a closer look. 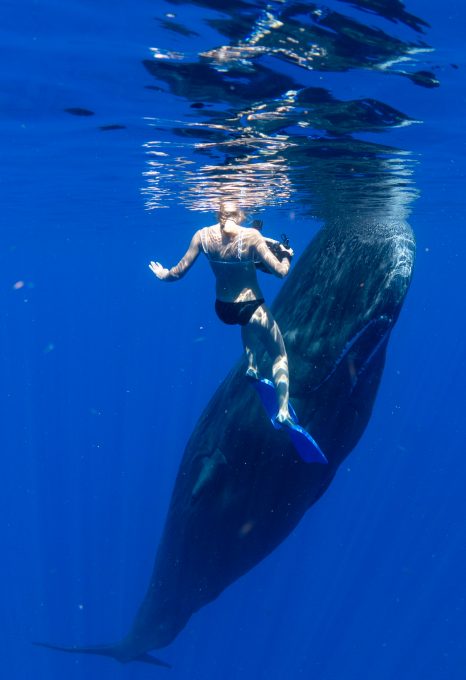 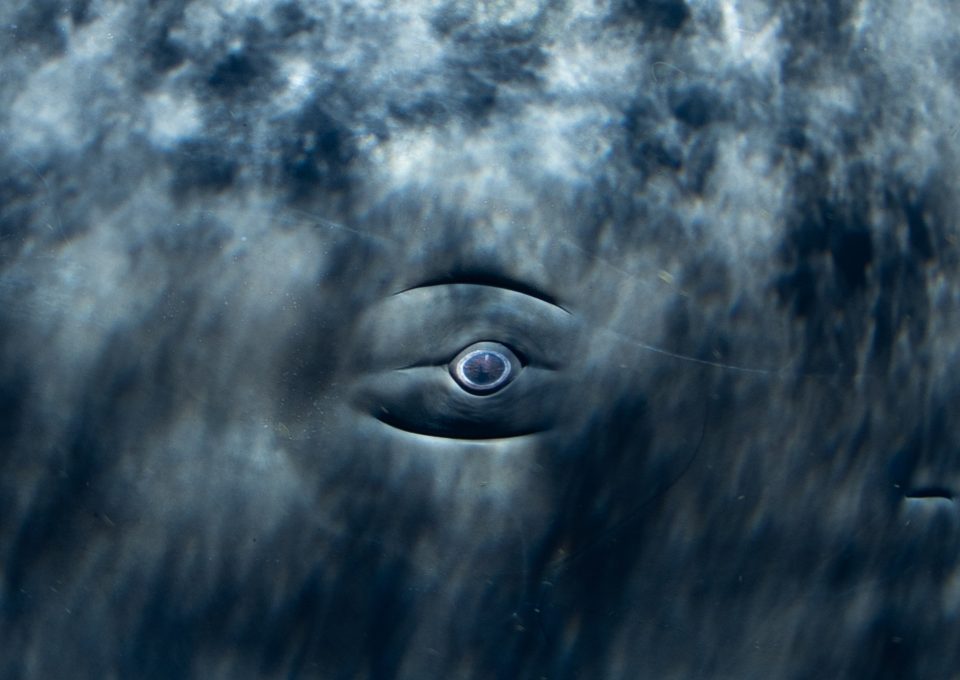 Throughout my career, as I moved from researching zooplankton in the Antarctic to studying Bluefin tuna in the Atlantic and Pacific Oceans, before pivoting to sharing stories of scientific research, those moments I spent with Physty were always in the back of my mind. I wanted to know more about his story and to see another sperm whale in the wild. The next time I saw a sperm whale, I was on expedition in the Norwegian Sea. I was filming for a project on Atlantic salmon when, out of the fog, I saw the telltale 45 degree blow of a sperm whale. I nearly fell overboard as I wanted to get as close as possible to this whale for a better look, but a few minutes later, it sounded and disappeared into the depths. Fast-forward to 2018 when, after years of expeditions during which I conducted scientific research, made films and photographed the underwater world, I made my first expedition to Dominica to try to reconnect with these fabled giants.

Our first trip to Dominica was a solid reminder of what makes wildlife filmmaking and ocean story telling so challenging. The weather was terrible, and the whales were nowhere to be seen. We spent long days listening for the distant clicking of whales but heard none. The ocean was silent until one afternoon in the pouring rain, we heard the sound we were waiting for, the gentle clicking of sperm whales hunting in the depths. After decades of dreaming about Physty and that quick glimpse in the frigid waters of the Arctic, this was my moment to reconnect with these incredible animals. However, this interaction would last only two minutes, and while brief, it only sparked my desire to spend more time in the water and learn more about these incredible animals. I had seen whales around the world and had spent time in the water with orcas and dolphins, but this fleeting moment solidified my understanding that sperm whales had truly captured my heart.

this fleeting moment solidified my understanding that sperm whales had truly captured my heart. 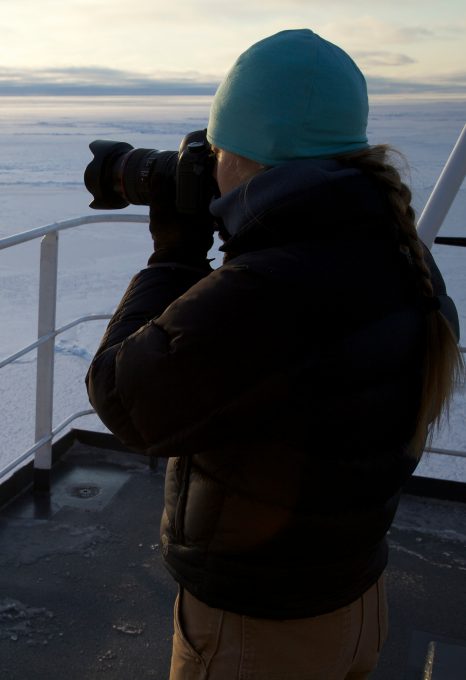 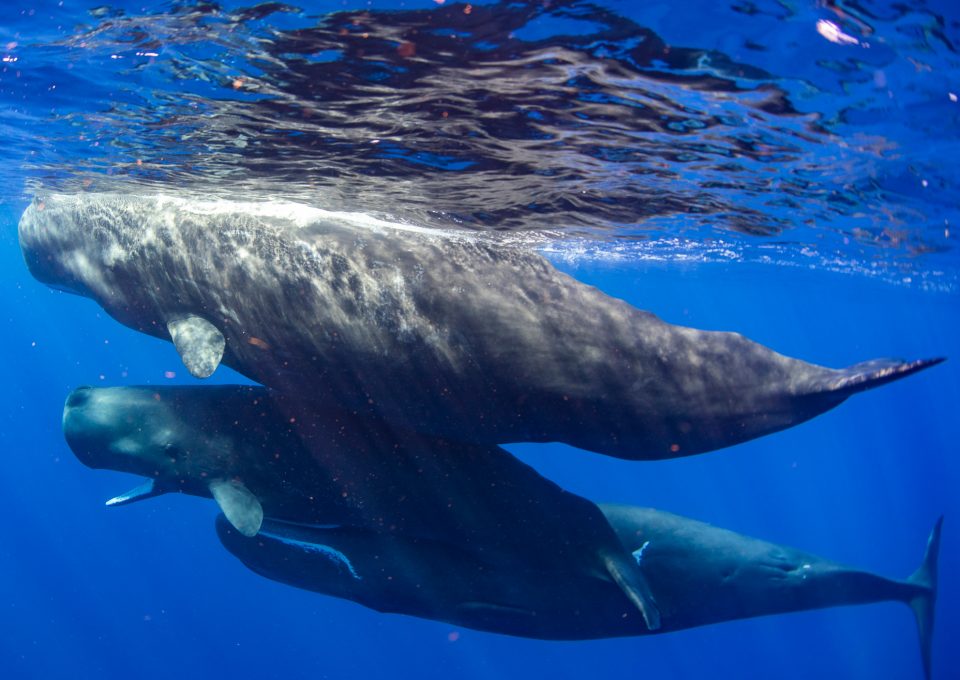 I found myself locked in a gaze with a pregnant female for more than 25 minutes.

Fortunately, luck was on our side in 2019 as I moved forward with my film project to tell the story of Physty and the incredible family dynamics and communities of sperm whales, and I found myself and my team back in the deep blue waters of Dominica under my second permit from the government to study and understand these incredible animals.

On the very first day in the water, I found myself locked in a focused interaction with one pregnant female for more than 25 minutes. She seemed to welcome me into her world, clicking on me, sizing me up and never letting me out of her sight. I had connected with Physty when I was a toddler, and now I found myself in an underwater dance with this beautiful female whale. Time seemed to stand still as she swam slowly next to me, seemingly trying to get closer and closer. At one point I was swimming backwards so as not to touch her; I don’t condone touching wildlife. As I tried to get out of her way to make sure she wanted me there, she would only move nearer. At one point, she went entirely vertical, closed her eyes and took a nap right next to me. She then opened her eyes, did a gentle twirl and began swimming slowly again. Finally, it was time for her to feed again, and with a casual flick of her tail, she disappeared into the depths. We would see this whale multiple times over the course of our ten days in the water. With one glance into her eye, I knew it was her; she was unmistakable.

The whales of Dominica are predominantly females, young and old. Like many whales, sperm whales are matriarchal with the females staying in their family units for the entirety of their lives. At one point, we were in the water with three generations of whales all at once. It was incredible to witness how these animals interacted with one another and to witness the female calf carefully mimicking the behaviours of her mother and grandmother. Like us, the whales learn from and rely on their mothers.  While we saw mostly female whales, young males will stay with their family unit for many years before venturing off into the ocean on their own. The more I learn about sperm whales, the more I realise how incredible it is that all those years ago, the rescue team was able to rehabilitate Physty who, being around five years old, should have still been with his mother and family unit. As I spent time in the water with the whales of Dominica, I couldn’t help wondering if Physty could have been born in these warm crystal-clear waters and perhaps more importantly, where he might be now.

I found myself locked in a gaze with a pregnant female for more than 25 minutes.