Despite sea temperatures rising faster in the Gulf of Eilat/Aqaba than the global average rate, its coral reefs exhibit remarkable resistance to global warming. Researchers are trying to find out why these ‘super corals’ exist.

According to recent research, 50% of the world’s coral reefs have already been destroyed. Furthermore, the scientific community estimates that over 90% of coral reefs will die by 2050 due to climate change and direct human impact. Reef death carries dire consequences for wildlife and the homes, health, and livelihoods of hundreds of millions of people: those who fish, work in tourism and dwell on low-lying islands rely on the reef’s survival. Coral reefs protect coasts against storm surges, waves, and erosion. Reefs reduce wave energy by 97% while being one of the most biodiverse ecosystems, supporting a third of all marine life. In this bleak outlook, a group of scientists from the Interuniversity Institute for Marine Sciences in Eilat, Israel (I.U.I.), have discovered a rare ray of hope. Corals in the Gulf of Eilat/Aqaba and the northern Red Sea may survive and even thrive into the next century. In fact, this region might host one of the last remaining complete coral reef ecosystems by 2100.

Human-produced carbon dioxide traps heat within Earth’s atmosphere and warms our planet, known as the ‘Greenhouse Effect’. Astonishingly, the ocean has absorbed approximately 90% of the excess heat generated by human-caused global warming, according to the 2019 Special Report on the Ocean and Cryosphere in a Changing Climate by the Intergovernmental Panel on Climate Change. But, even if greenhouse gas emissions are drastically reduced today, the ocean will continue to warm at an alarming rate for decades.

Corals typically live in nutrient-poor, tropical waters. Here, symbiotic algae in the coral tissues may provide up to 100% of the coral’s energy requirements by transferring sugar produced during photosynthesis. Acute ocean warming stresses corals, leading to a breakdown in their relationship with the algae. Without the brown algae, corals appear a ghostly white as the limestone skeleton is seen through the coral’s transparent tissue. In this state, the coral animal is alive but essentially starving. The water temperature must return to normal for the coral-algae symbiosis to recover. If temperatures remain elevated, there is a high likelihood of coral death. As global warming intensifies, such ‘coral bleaching’ events become more frequent and severe. The current warming rate is so rapid that many long-lived animals, such as corals, fail to adapt to the changing environment.

And yet, despite sea temperatures rising faster in the Gulf of Eilat/Aqaba than the global average, the coral reefs at this northernmost point of the Red Sea exhibit remarkable resistance to the effects of global warming. Corals in this region do not exhibit the expected bleaching response when exposed to high temperatures either in nature or in scientific experiments. 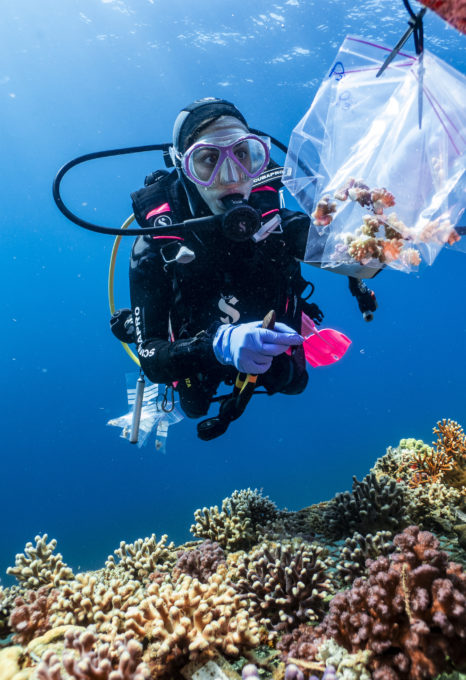 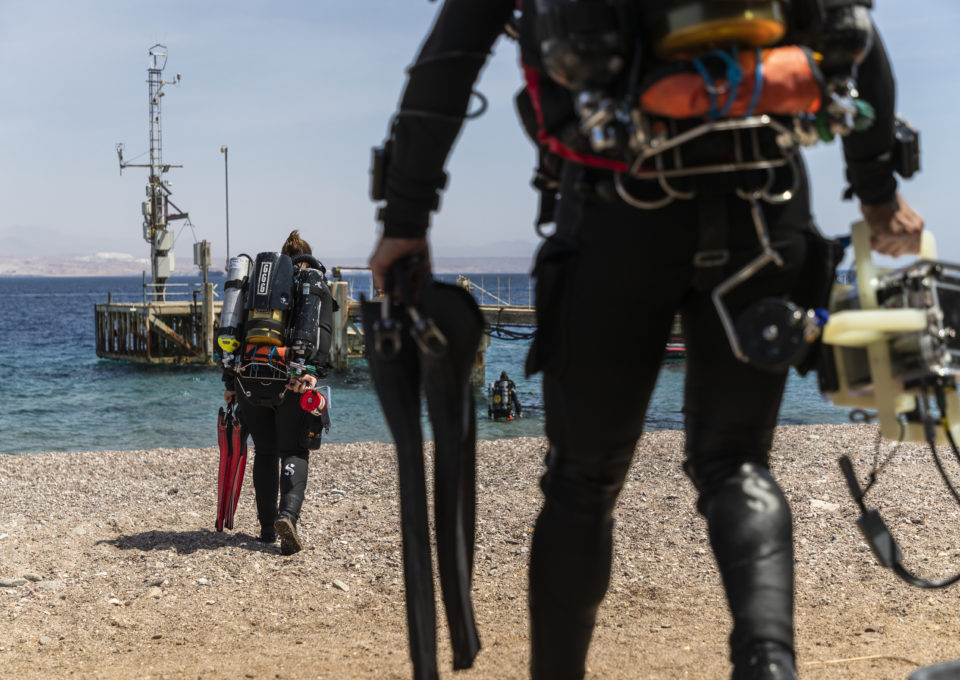 Scientists suggest that a significant natural selection event at the end of the last ice age is one of the reasons for the northern Red Sea corals’ response. Glaciers melted as the global temperature increased about 10,000 years ago, and sea levels rose. Water flowed into the Red Sea basin, which had been almost entirely cut off from the Indian Ocean. Coral larvae passed through the relatively narrow Bab el Mandeb strait to recolonise the southern part of the Red Sea. Until today, this southern passage is the only natural entrance for marine life into the Red Sea. Seawater temperature at the southern Red Sea can reach 36°C – which is considered extremely high for corals. This hot passage acted as a selective barrier; only corals capable of withstanding high temperatures could pass through and colonise the southern Red Sea. With time, corals continued migrating north into the Red Sea, where summer water temperatures were significantly lower. Today, these corals, evolutionarily selected for heat resistance, now live well below their thermal threshold relative to other corals worldwide. This history makes the Gulf of Eilat/Aqaba a refuge for corals in the face of climate change.

Innovative scientific research, started in the early 2010s at the Interuniversity Institute of Marine Sciences in Eilat and led by Professor Maoz Fine, revealed for the first time the extraordinary resistance to ocean warming that the corals in the Gulf of Eilat/Aqaba possess. Fine ascribed the resistance to their unique evolutionary history in a scientific publication in 2013. His research findings showed that whilst different species may have differing levels of thermal resistance, many retain a healthy population of photosynthetic algae with an increase of 4-5°C above the current summer maximum. In extreme cases, this may be extended up to 7°C. Furthermore, one locally important species showed a 51% increase in primary productivity (photosynthesis) with a 1-2°C increase in water temperature sustained for six weeks. This indicates that these corals live below their optimum temperature and may do better in warmer waters.

Coral reefs in other parts of the world do not have the same biological capacity to survive anomalously high water temperatures. A 1-2°C increase above the local maximum summer temperature would typically induce a mass coral bleaching event. At the current pace of global warming, we’re on track to increase ocean surface temperatures by 2-3°C or more by the end of the century, putting most of the world’s reefs at immediate risk. Over the last decade, the team of scientists from the I.U.I. have continued to delve deeper into the question of what makes northern Red Sea corals more resistant to temperature stress, targeting the topic from multiple angles, including genetics, reproduction, algae symbiosis, and energy consumption.

“Initial research showed adult corals to be resistant to temperature stress, but the reproductive and juvenile life phases, critical to survival, are typically thought to be more sensitive to environmental changes,” says Dr Jessica Bellworthy. “My PhD research focused upon these often overlooked life stages. I used the Red Sea Simulator system, developed by Professor Fine, to conduct experiments investigating cross-generational effects of climate change – if and how environmental stress is carried from parent to offspring”. The good news is that juvenile corals of the tested species from this region also appear extraordinarily resistant to temperature stress. Dr Bellworthy, now a postdoctoral researcher in the lab of Professor Tali Mass at the University of Haifa and the I.U.I., continues to investigate the capacity for coral adaptation during the first few months of life. For one of her experiments, net traps are placed over adult corals on the reef just before sunset, both in the shallows and the mesophotic zone. Coral larvae are then released into the traps at night, and divers return at sunrise to collect them. Experiments have once again shown that the photosynthetic algae are key to the coral’s adaptation and survival in a changing environment, even at this very early life stage.

The shallow reefs could be best compared to the tip of an iceberg, with most scientific research being conducted at depths of less than 30m. This recreational scuba diving limit and past technological limitations have made deeper reefs more logistically complex for scientists to access. The understudied mesophotic coral ecosystem (MCE), from the Latin word ‘meso’ – meaning middle, and ‘photic’ – meaning light, extends from 30 to 150m. It is thought to be less exposed to both global warming and human impact than the shallow reef but has a unique biodiversity and ecological importance.

Scientists suggest that a significant natural selection event at the end of the last ice age is one of the reasons for the northern Red Sea coralsʼ response.