The secret lives of seals

The secret lives of seals

Sightings of wild seals can be many things; dramatic, life changing, and all too often brief. For those of us who dedicate our lives to understanding how seal populations change over time, the flighty nature of these animals can present many challenges.

On the west coast of Sweden, we are taking advantage of new technologies, like drones and artificial intelligence, to observe seals in their natural environment without the risk of disruption. In the first year of a new individual identification programme, we have already made an unlikely discovery.

We have identified a young grey seal hidden among a harbour seal colony in the Skaggerak area of Western Sweden. Grey seals are extremely rare in this area and, when observed, are usually large males thought to be exploring far from their breeding sites. This sighting could be the first indication that the area is being recolonised by breeding grey seals after more than 100 years of absence. Although not enough on its own to draw firm conclusions, this sighting highlights the complexity of the marine ecosystem, where close observation is needed to unravel population trends and interactions between species.

Seals are members of the Pinneped clade, which translates as ‘fin footed.’ Although all seals share adaptations to their aquatic home, like streamlined bodies, individual species have vastly different lifestyles. Three seal species make a permeant home in Sweden, each with a unique method of survival and role to play in the ecosystem. In the Northern Baltic, the smallest of the three residents; the ringed seal, is perfectly adapted to living on ice. This species is considered vulnerable to extinction as climate change puts sea ice at risk.

The west coast of Sweden is dominated by the harbour seal. Slightly larger than the ringed seal, this opportunistic predator returns year on year to the same skerries to give birth during the summer months. The harbour seal population has shown an incredible ability to bounce back from natural and human made disasters. Over the previous century they have been hunted to the point of population collapse and experienced two outbreaks of the deadly Phocine distemper virus, also known as ‘seal plague.’ For two decades however, the population has been steadily recovering. Now, a new threat is on the horizon for this charismatic species as our surveys have shown lower than expected birth rates two years in a row, possibly as the result of limited access to food in the heavily fished North Sea.

The third and largest resident seal species in Sweden is the grey seal. A unique and isolated population of this species lives in the Baltic Sea. Unlike the ringed seal, who are completely reliant on ice to breed, and harbour seals, who are intolerant to the cold, grey seals in the Baltic can give birth on either land or ice. Grey seal pups have a better chance at surviving on ice where they can spread out, reducing the spread of parasites and infections. 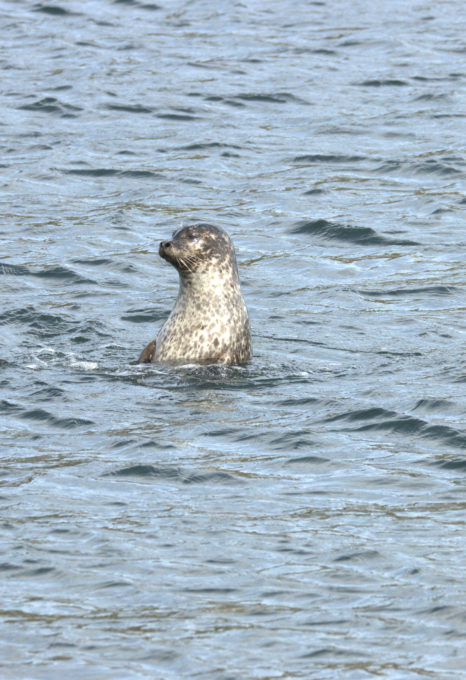 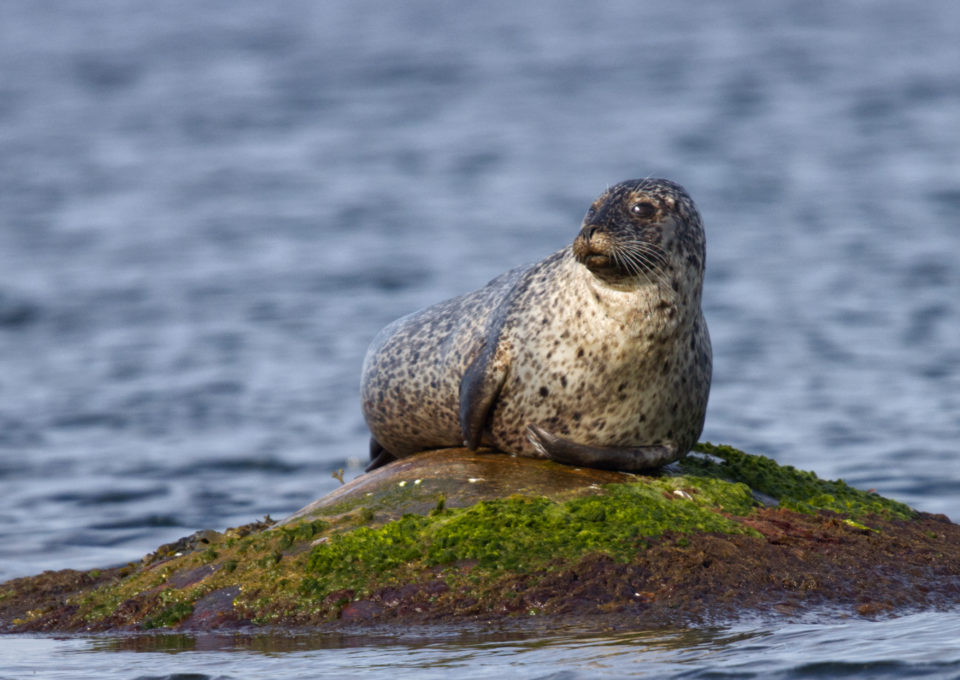 When seen side by side, the most obvious difference between grey and harbour seals is their size. Adult grey seals are between 1.8 and 2.1 metres in length, with males being significantly larger. Harbour seals are only 1.3 to 1.7 metres when fully grown. For younger seals which haven’t reached their full length, the two species can be difficult to distinguish from a distance. There are still key characteristics to look out for. In profile, grey seals have a flat nose, while harbour seals have a more scooped nose and a distinct forehead. From the front, grey seal nostrils are parallel, while harbour seals nostrils form a v shape and almost meet in the middle.

The difference between the two species is even more evident in newborn pups. Grey seals are born with a fluffy white coat called a ‘lanugo.’ This keeps them insulated and camouflaged when on ice, however it is not waterproof meaning they can’t spend any considerable amount of time in the sea. Harbour seals in contrast shed the lanugo while still in the womb and are born with a silvery grey waterproof coat. This gives them immediate access to the water and an escape route when disturbed. While harbour seals take full advantage of the summer sun and give birth in June, grey seals in the Baltic time their pupping season with the sea ice and give birth in February or March. In contrast, the grey seal population in the Atlantic gives birth over an extended period between September and December.

This history of seals along the Swedish coast is intimately tied to human exploitation and attitudes towards wildlife. Up until the 19th century, grey seals outnumbered harbour seals in the Kattegat-Skagerrak area and pups were born in many locations. Pupping coincided with the earlier breeding seen in the Atlantic population of grey seals. In the late 1800s, Denmark brought in a bounty system aimed at reducing or eradicating seals. This was matched by a similar scheme in Sweden at the beginning of the 1900s. Bounty hunting devastated all seal populations, reducing both the 90,000 strong Baltic grey seal and 30,000 strong harbour seal populations to less than 5,000 of each species. The effect on the western grey seals was even more extreme and the breeding population became extinct before 1900.

In the 1970s, all species of seal were protected in Sweden. The remnants of the harbour and Baltic grey seal populations began a slow journey to recovery; however, the western grey seals were completely gone. Like harbour seals, grey seals are creatures of habit and generations of animals will give birth in roughly the same location they are born. Only rarely does a seal break the mould and establish itself in a new location. The result is that the distribution of grey seal pupping grounds, which was overturned by human actions in a matter of decades, will likely take centuries of protection to recover from historical bounty hunting. This is assuming of course that the habitat is still capable of sustaining the species. Changes to the ecosystem, like disruption of potential pupping sites by tourists and the collapse of fish stocks, may have made the west coast less hospitable to grey seals. For this reason, the sighting of a young grey seal in the West is an exciting revelation. Is this a young explorer visiting our coasts, or a Skagerrak native and herald of recolonisation? Only repeated observation of the same individual and searching for a sighting of the distinctive white coat of a grey seal pup can tell.

Only rarely does a seal break the mould and establish itself in a new location. 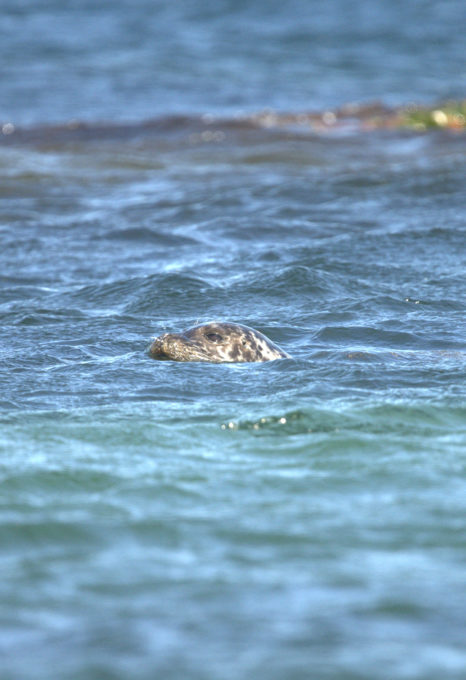 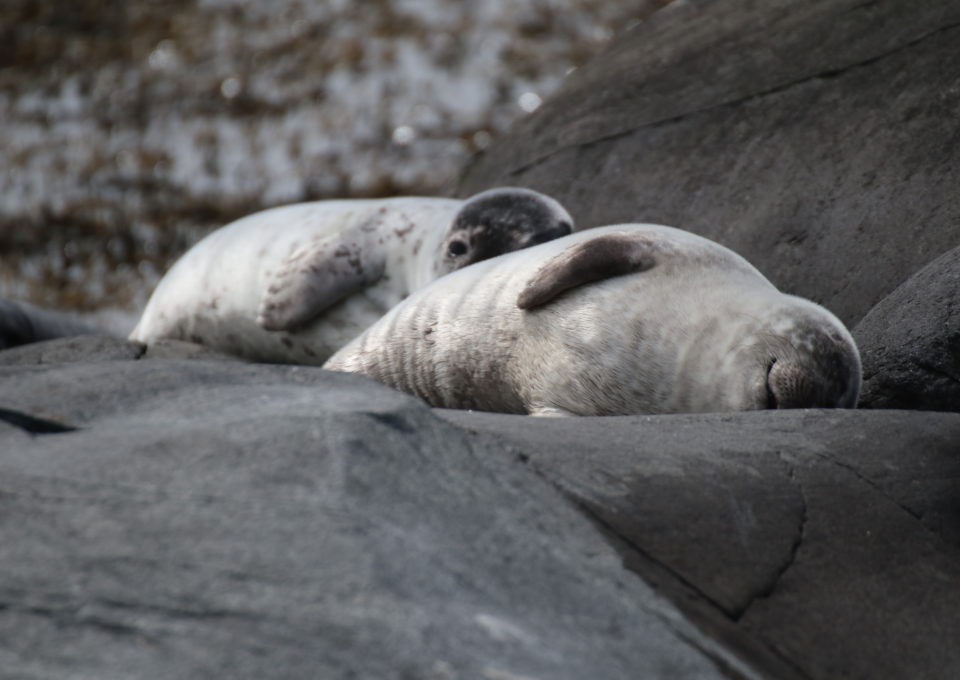 With the recovery of Swedish seal populations has come a renewed call for population control. While a protective hunt of animals directly interacting with fishing gear has taken place for years, 2020 saw the introduction of a new licenced hunt with quotas far higher than had previously been allowed. For the year 2021/2022, a quota of 2,000 Baltic grey seals and 700 west coast harbour seals has been listed. If such high quotas continue to be set and are fulfilled, both species will be at risk of population decline, especially if they are under stress from the changing environment and loss of key prey species. This is the reason we have begun to develop new techniques for measuring pup production using drones and individual identification to study seal movements and survival. It is more important than ever that we understand what controls population growth so that we can detect early warning signs of decline.

The young grey seal was photographed as part of an ongoing project to build a database of individually identified Swedish seals. Grey, harbour, and ringed seals all have unique patterns on their fur. These patterns can be used as a ‘fingerprint’ allowing the individual animals to be identified each time they are spotted. By recording where and when individuals are sighted, we can generate important information on how long seals live, how much they move around and how much use they make out of certain habitats. This information forms the basis of species assessments and can be used to develop management practices like establishing the most effective protected areas and avoiding unsustainable hunting.

With the recovery of Swedish seal populations has come a renewed call for population control.

With these keystone species comes the potential recovery of incredibly diverse ecosystems.

In a world where conservation success stories are rare, the recovery of the harbour seal population in Northern Europe and grey seals in the Baltic Sea should be a massive source of pride for the people of Sweden and surrounding nations. It shows the world that the recovery of top predator species from the brink of extinction is possible. With these keystone species comes the potential recovery of incredibly diverse ecosystems.

These ecosystems, both on land and in the sea, support all our lives by providing food, water, clean air, a stable environment, and peace for those who seek it. The story of seals does not end there, however. Like everything in nature, seal populations are in a state of constant change. If the mistakes of the past are to be avoided, continued effort needs to go into monitoring and understanding what new threats the next generation of seals face. This is part of what we must do on our own doorstep to tackle the global trend of biodiversity loss. The future of seals, and all the inhabitants of our waters rests in our hands.

With these keystone species comes the potential recovery of incredibly diverse ecosystems.