“That connection between past and present, alive and extinct, human and animal serves as a reminder that we’re simply a small part of an unfathomably large universe.”

It’s 6 am and the sky in Venice in Florida is painted with streaks of pink, red, orange and gold shimmering and intertwining on the horizon. The ocean spray forms a misty veil sparkling in the dim light and palm trees still draped in shadow hover like giants over the beach, swaying gently in the salty breeze. As the first rays of sunlight touch the beach the wet sand is transformed into tiny prisms of light that bounce off each other in an iridescent dance. The cacophonous squawking of gulls punctuates the rhythmic lapping of waves, and a handful of barefooted beachcombers are already scattered along the beach; eyes trained on the ground, scanning the sand for fossilised shark teeth of the ocean’s infamous predator.

My day starts before the crack of dawn, when it’s still pitch dark, save for the narrow beams of flashlights, darting from side to side over sand and shells. The sand is wet and cold beneath my feet, and my flashlight sweeps the ground methodically, until the tell-tale triangular shape of a shark tooth appears in the light of my torch. In a race against the receding waves, I reach down to grab it and my fingers close around the smooth surface. It’s the fossilised tooth of a tiger shark, with a slanted tip and sharp serrations. It’s smooth, pointed and in perfect condition. It’s the first tooth of the day, and I drop it into my bag. As the sun rises and bathes the beach in a gentle hue of gold, it gradually fills up with more fossil hunters and beachgoers. I continue down the beach, to less crowded areas, occasionally stopping for longer periods of time to dig through a good shell pile or to scan the water for dolphins. By noon I usually have at least a hundred teeth.

In a race against the receding waves, I reach down to grab it and my fingers close around the smooth surface. 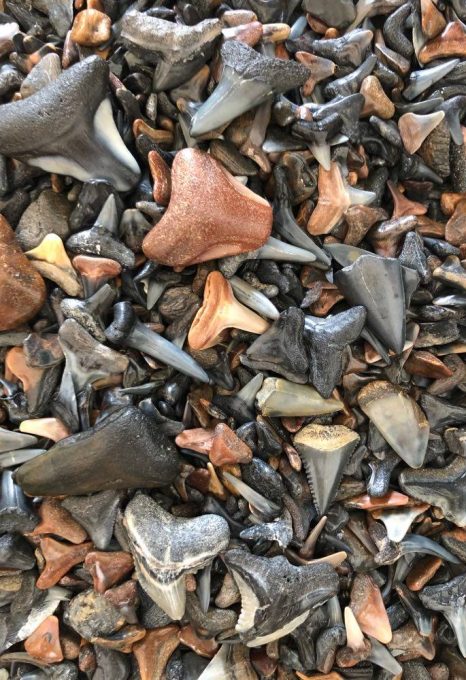 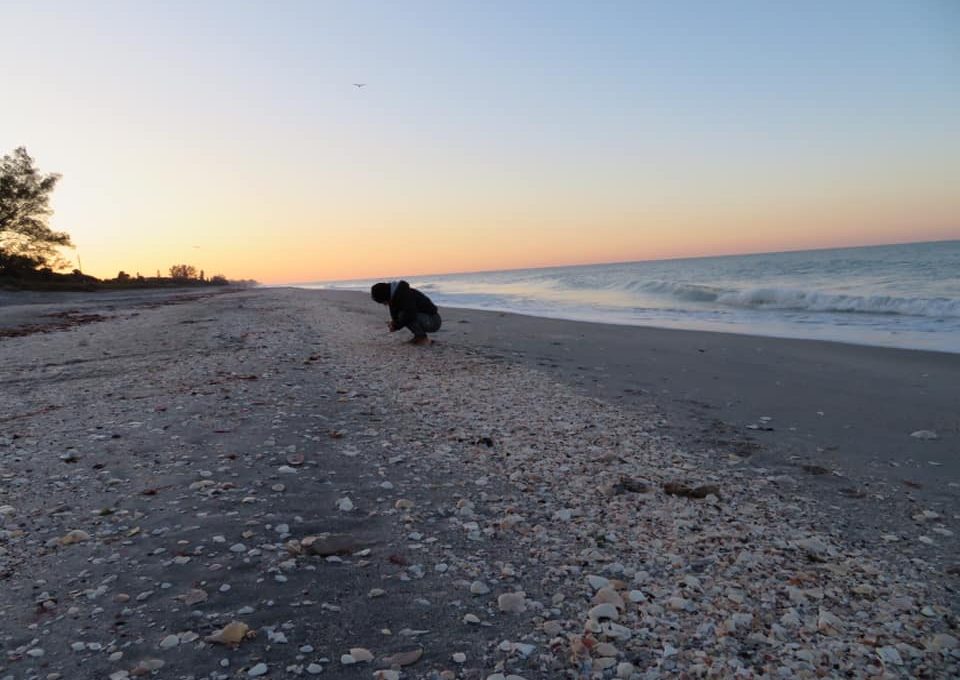 On multiple occasions over the last ten years, I’ve made the long drive from Ontario, Canada down to Venice in search of fossilised shark teeth. Searching for them is a fascinating treasure hunt that anyone can take part in, and if you know what to look for, just a few hours on the beach can yield a collection of a hundred teeth or more. Venice is the proclaimed shark tooth capital of the world, and while it’s not the only place in the world to find shark teeth, it’s certainly one of the best.  There is a seemingly inexhaustible supply of fossilised shark teeth that can be found scattered along the beach, buried amongst shell piles, washing up in the waves or simply sitting on the sand free for the taking.

Searching for fossilised shark teeth is a popular pastime for locals and holidaymakers alike, and with a good eye and a little bit of patience the teeth aren’t that difficult to find. Many people prefer to stroll casually along the tide line, scanning the sand and digging through shell piles, while other more ardent fossil hunters wade out to where the waves break and scoop up sand and shells using a shovel or strainer. I’ve had the most luck digging through shell piles at low tide, but whatever your method, finding teeth is almost a guarantee.

Venice is the proclaimed shark tooth capital of the world. 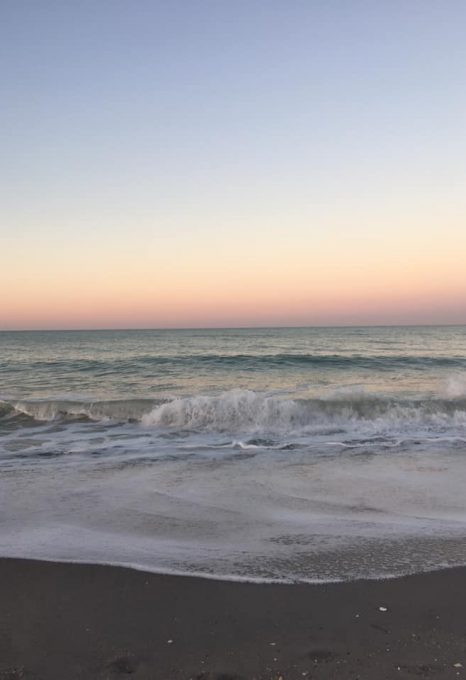 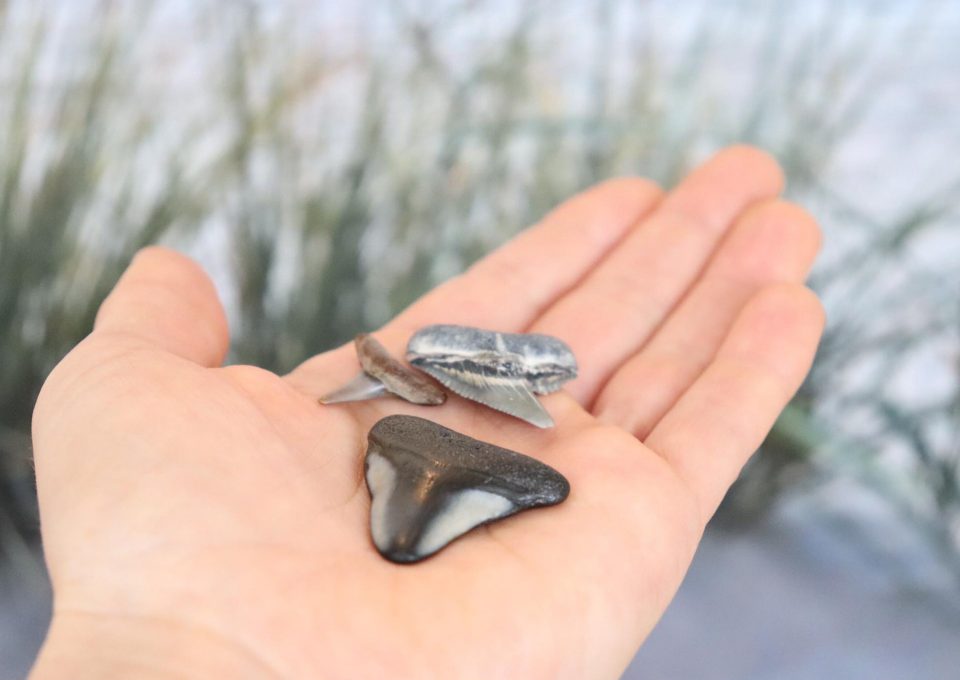 Sharks have multiple rows of teeth which are lost and replaced multiple times throughout their life, with a single shark losing 20,000 or more teeth in its lifetime. Many of these teeth get buried in sand and sediment, an oxygen deprived environment where the tooth absorbs the surrounding minerals and is preserved and eventually fossilised through a process called permineralization.  Florida was submerged and uplifted multiple times in geologic history and sharks were numerous in the warm gulf waters. As water gave way to land, a vast plateau rich in fossils was uncovered and fossils can be found all over the state today. A deep fossil bed sits just off the coast of Venice, and as it is constantly eroded by wave action, teeth and other fossils come loose and are eventually deposited on the beach.

The fossilised shark teeth on the beach are estimated to be between 2 to 35 million years old spanning the Pliocene to Miocene Epoch. They come from a variety of shark species including mako sharks, bull sharks, sand sharks, lemon sharks, great white sharks, tiger sharks, hammerhead sharks, and the massive megalodon shark which is now extinct. Most teeth on the beach are small; between 1 to 5cm in length, but megalodon teeth, which can be up to 7 inches long, are the most sought-after prize by shark tooth hunters here. Although they are most often found further out, you may get lucky if you go out after a storm when waves are powerful enough to carry up heavier sediment.

I’ve found thousands of fossilised shark teeth over the years; some so tiny that they are barely distinguishable from a large grain of sand and others the size of my palm. Many of the teeth are solid black or grey, while others are beautiful shades and combinations of green, red, rust or beige. The colour depends on the chemical composition of the sediment in which it was fossilised. You never know what surprises will wash up in the ebb and flow of the tide, and the excitement is in the search. You can visit the same spot multiple times, yet the experience is always different. We once spent hours and found hundreds of teeth, digging through deep shell piles after a storm. A few days later, that same section of beach had been utterly transformed, the shell piles washed away and not a tooth to be found.

Many of these teeth get buried in sand and sediment, an oxygen deprived environment where the tooth absorbs the surrounding minerals. 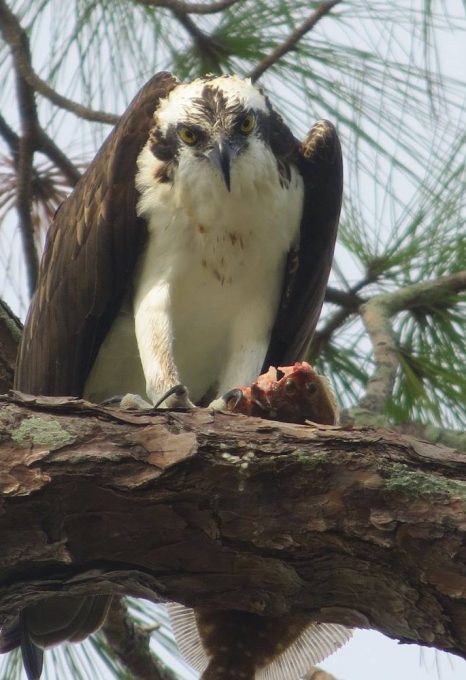 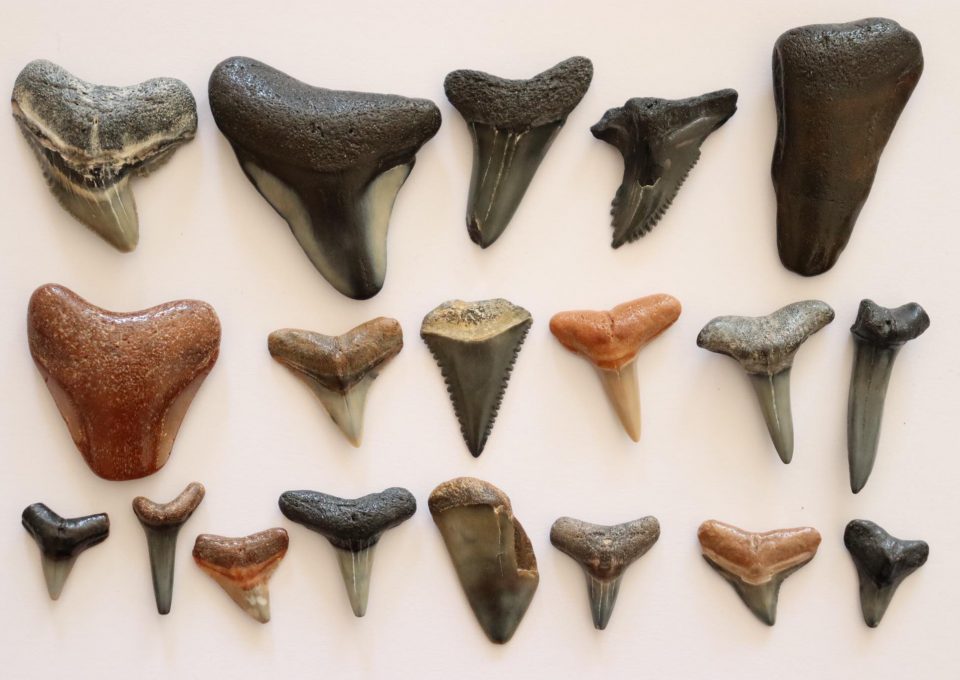 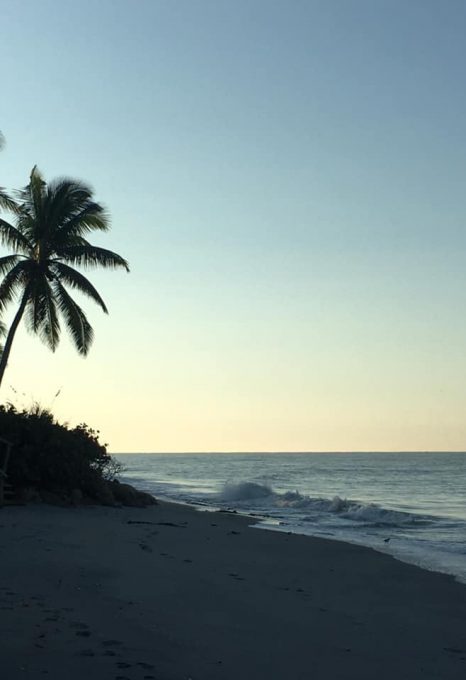 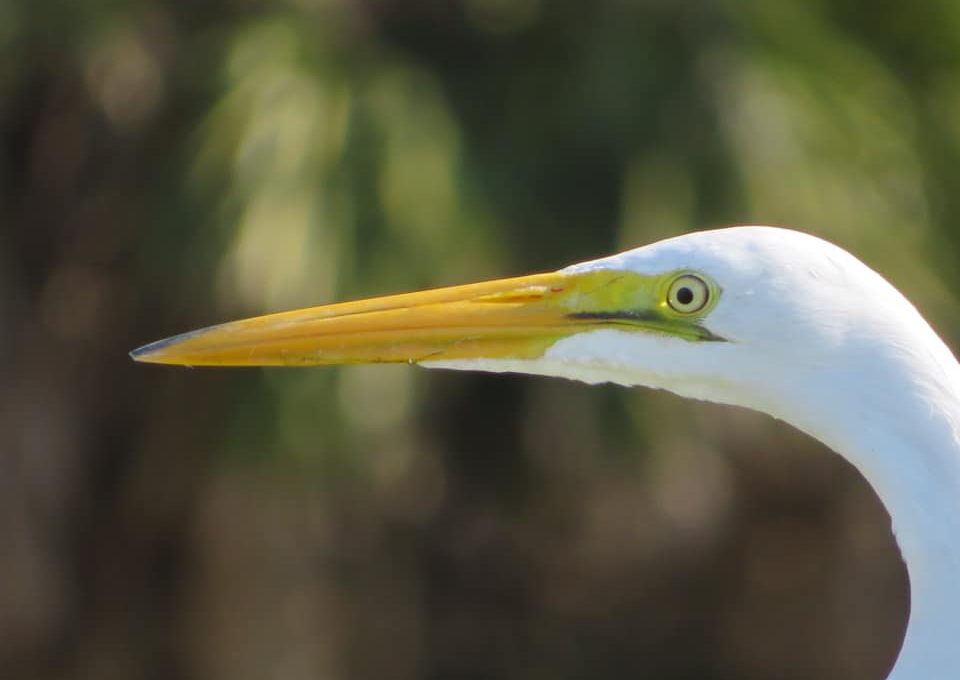 Holding a fossilised shark tooth is holding a small piece of natural history and establishing a connection spanning eons.

While Venice is best known for its shark teeth, this small corner of the world is also home to an abundance of wildlife both above and below water. I’ve seen osprey dive to catch fish, egrets silently stalking fish in the shallows, pods of pelicans dancing in flight, manatees soaking up the sun in the calm waters near a pier and dolphins playing joyfully in the waves. It’s an area of world class beaches, fossils, shells, and vibrant wildlife and birdlife.

Shark tooth hunting is an exciting and addictive treasure hunt in a dynamic environment. Every day is different, every tooth is unique, and you never know what fascinating finds will wash up. For me, the joy of finding a shark tooth lies in knowing that I’m likely the only person who has ever held it. Holding a fossilised shark tooth is holding a small piece of natural history and establishing a connection spanning eons. That connection between past and present, alive and extinct, human and animal serves as a reminder that we’re simply a small part of an unfathomably large universe and reinforces the importance of treating the earth and all of its creatures with kindness and compassion. In doing so, we ensure that generations to come can enjoy exploring the many wonders of our planet’s coastal areas.

Holding a fossilised shark tooth is holding a small piece of natural history and establishing a connection spanning eons.