Classified as critically endangered in the Northeast and Northwest Atlantic, the relatively high number of porbeagle shark sightings in Breton waters poses several questions. A group of researchers tries to find answers.

The shrill noise of the alarm clock rings in my ears, urging me to quickly get ready. As promised to the research team, I am at the port for 7.30am, ready for an exciting mission in the Northeast Atlantic that is made up of shark researchers, PhD students, volunteers, fishermen with an exceptional knowledge of the local waters and me as the mission’s photographer. When I first arrived here at the Trégor coast in Brittany, France, I was surprised by the abundance of life I witnessed. The area is part of the Seven Islands nature reserve, which is home to several dolphin species, a diverse abundance of seabirds, including the largest colony of northern gannets in France, as well as the charismatic porbeagle shark.

I board one of the three boats that are part of the research mission, and we make our way to the fishing area in only a few minutes. The fishermen prepare their lines and fix mackerels onto tiny circle hooks that are said to limit the risk of injury to sharks during capture. Now the waiting game begins and the fishermen’s boat drifts in the currents for a few hours. Suddenly, the fishing line moves. The fishermen jump up and try to reel in the heavy fish as quickly as possible, while we set up the scientific protocols and acoustic monitoring devices. Porbeagle sharks are powerful animals, but the fishermen act quickly and manage to control the shark by passing a lasso around its caudal fin. This is the signal for our boat to approach.

Once the two boats are next to each other, the two shark scientists, Nastasia and Sandrine, hop on to the fishermen’s boat to take all necessary measurements and tag the shark to study the animal’s movements. An acoustic tag gives the researchers precise data on how long the sharks stay in a particular region, how they use the water column and when they leave the fishing area. However, tracking is only possible for as long as the shark and the acoustic boat are in the same area. That’s why some sharks are also equipped with satellite tags that can collect information for up to a year. The combination of both tags could help identify the shark’s diving behaviour and migratory routes. Besides tagging, the research team focusses on biological markers present in porbeagle sharks’ muscles and blood that can help identify their feeding areas and prey. To obtain these samples, scientists follow established protocols for taking a classic blood sample from the tail vein of the animal and realise biopsies through a biopsy gun that works like a large needle with a receptacle.

The biological markers that interest the researchers are the isotopic ratios of carbon (C13/C12) and nitrogen (N15/N14). A prey living near the coast will have a higher quantity of C13 than prey living offshore. A shark with an isotopic ratio rich in C13 will be a shark that feeds closer to the coast. And when comparing the isotopic ratios of muscles and blood for the same individual, the researchers will be able to garner information on its movements. For example, a shark whose C13 muscle content is low and C13 blood content is high may have spent several months offshore before returning to the coast. The nitrogen isotope ratio, on the other hand, tells researchers about the trophic level of the prey consumed thanks to N15 enrichment along the food web. An anchovy will have a lower N15 rate than a bonito which itself will have a lower rate than a porbeagle shark. These two approaches are completed by scientists measuring the shark from the snout to the posterior notch of the caudal fin, allowing for an estimate as to where an individual is in its life cycle. They also note the presence of distinctive marks such as scars or spots that could help identify each shark at a later stage, much like a human fingerprint.

The entire procedure takes less than 15 minutes and is done in a way that ensures the animal doesn’t get harmed. It is then released – my cue to get in the water. In a few moments, the shark swims away in swift, powerful motions and volunteers start to use their acoustic devices to follow the tagged animal. The fishermen return to their position and look for the next shark of the day. In only a few hours, the team catches five sharks, ranging between 1.67m and 2.29m. One of the captured individuals already had a tag on his back, indicating that the shark had been tagged by APECS (Association Pour l’Etude et la Conservation des Sélaciens) during a previous mission. 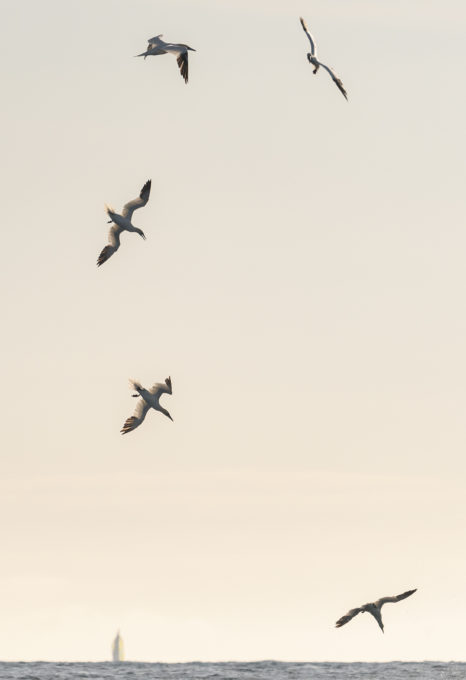 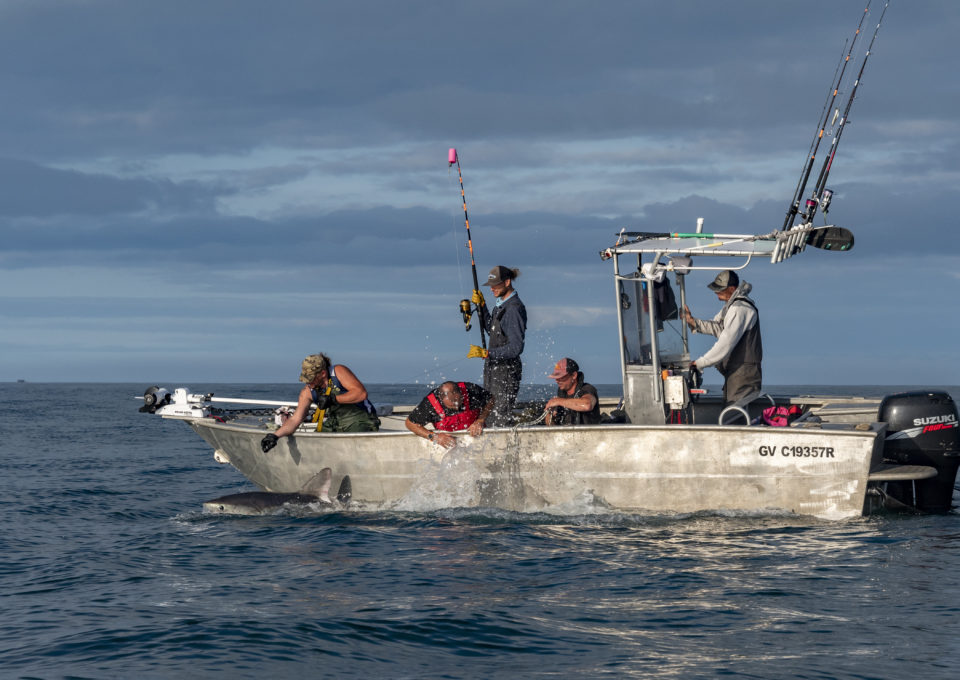