In the Bahamas, sharks are worth far more alive than dead.

It is estimated that 100 million sharks are killed every year, driven by a demand for fins, meat and other products. The global shark market is, ultimately, driven by money. What we need, therefore, is a better understanding amongst coastal communities where practices such as finning are rife, that living sharks have value.

In the Bahamas, sharks are protected. This has helped maintain a healthy ecosystem while also boosting the economy. The health and diversity of the shark population brings in people from all over the world – divers, photographers and filmmakers – benefiting local tour operators, restaurants and hotels.

Sharks have been around for more than 400 million years, surviving multiple mass extinctions. Despite their incredible ability to adapt and survive, they are perhaps facing their greatest threat yet – humankind. As our global population increases, the demand for more is relentless. Natural resources above and below are straining under the pressure. The ocean and its inhabitants have long been considered an endless resource, something we know now to be far from true. For island nations such as the Bahamas, which relies on fishing for employment and the wider economy, headlines such as ‘No fish by 2050’ and ‘More plastic in the ocean than fish by 2050’ are alarming. The ocean and the creatures that call it home are central to life on the island. As such, most Bahamians know the importance of protection.

I live in Bimini, the westernmost part of the Bahamas, a short distance from the coast of Florida. Bimini is known for its population of sharks. I see sharks every day and learn something new about these remarkable creatures every time I share the water with them. There are very few places in the world where sharks can be encountered so readily. The thought of being surrounded by sharks might terrify some, but for me it’s both a pleasure and a privilege. I take great pride in the programmes and operators working on the island – Sharklab, local research-supporting Bimini Scuba Center and the non-profit Sharks4Kids – and the fact that Bimini seems to be bucking the shocking global shark trends. Our healthy populations sit in contrast to global statistics that include 24% of sharks, rays and skate being listed as threatened or near threatened with extinction.

Sharks are perhaps facing their greatest threat yet – humankind. 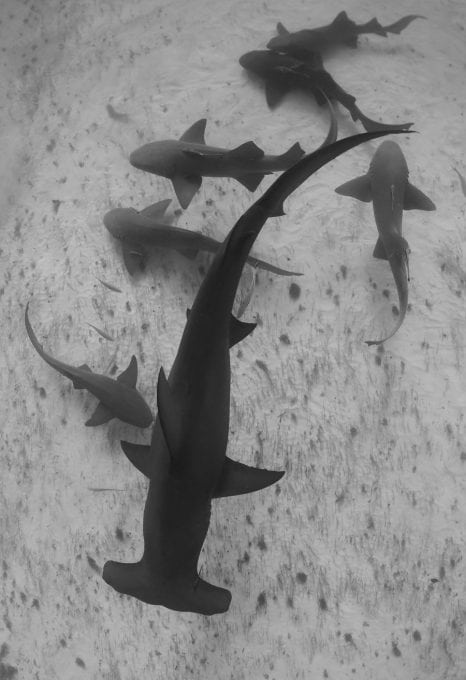 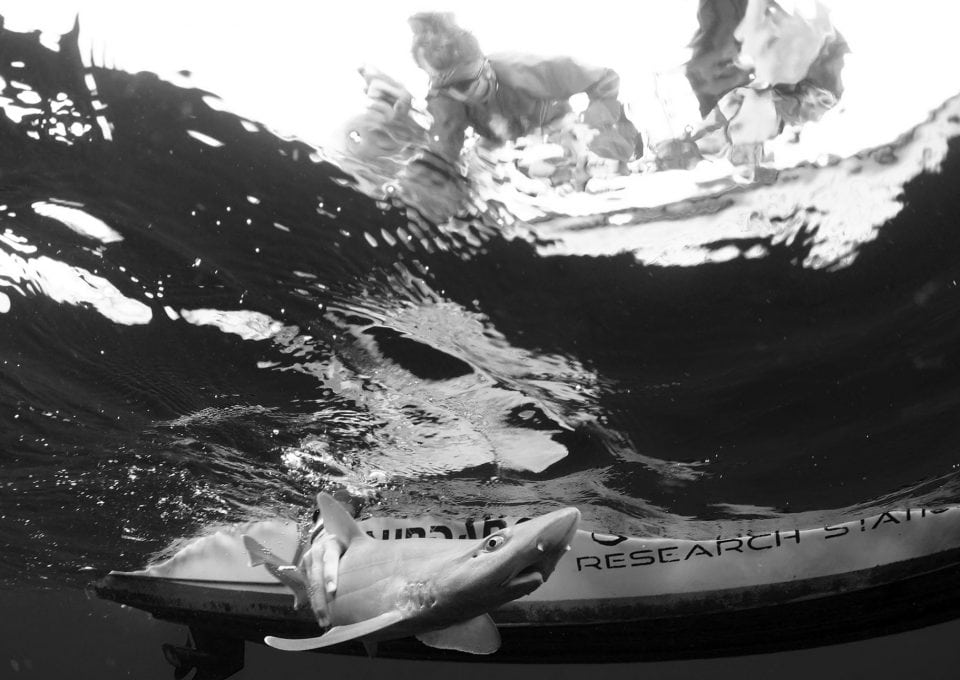 Bimini really put itself on the map in 1990 when Samuel ‘Doc’ Gruber established the Bimini Biological Field Station. Since its inception, the Sharklab has pioneered research and continues to be a global leader in shark science.

The Bahamas took its first significant step towards shark conservation with the banning of longlines in the 1990s. Longlines result in extremely high levels of by-catch (the capture on non-target species), with sharks making up a large percentage of this in many fisheries. By-catch is often dumped at sea, if not landed in port. The United Nations’ Food and Agriculture Organisation’s 2012 report estimated up to 40% of catch is thrown overboard. It is one the biggest threats to ocean health. This is especially a problem on the lawless High Seas, where unregulated longline vessels roam freely, decimating the waters they visit.

In 2011, the Bahamas took another massive conservation step and declared its entire exclusive economic zone (an area that stretches 200 nautical miles from Bahamian shorelines) a shark sanctuary. This not only banned commercial shark fishing, but also prohibited the sale, trade and possession of sharks or shark parts. In the same year, the value of a Caribbean reef shark was estimated to be $250,000 for tourism if kept alive. The same shark would generate approximately $50 if killed and sold. It was the first time a ‘kept alive’ value had been calculated for a shark in Bahamian waters. Global conservation organisations like PEW Charitable Trusts played a huge role in supporting the government of the Bahamas as well as local NGOs pushing for the establishment of a sanctuary.

To further understand the true economic benefit of sharks in the region, a systematic study was carried out by the Cape Eleuthera Institute. The research team, led by Andrea Haas, Dr Edd Brooks and Tony Fedler, conducted surveys with dive operators, monitored shark-based film projects and spoke with research groups. The study revealed 43% of divers (19,000 people) visited the Bahamas to dive with sharks.

In 2014, comprehensive analysis of the tourism industry found that sharks and rays generated nearly $114 million, with 99% of this coming from shark-based tourism. Such data is critical for maintaining current protections, but also important for the implementation of additional prospective protections. This is especially true when looking at migratory species which travel through the Bahamas.

Great hammerheads, oceanic whitetips and tiger sharks are three migratory species that pass through Bahamian waters, visiting seasonally. Great hammerheads, for example, visit Bimini’s waters in the winter months, their regular visits creating a commercially successful dive site. The sharks make regular appearances on Shark Week and fill the timelines of a multitude of ocean-themed social media accounts. I have met divers from India, Scotland and Australia, who all spent thousands of dollars to dive with these beautiful creatures. But when the hammerheads leave the Bahamas, they are no longer protected. One of the Bahamas’ great hopes – particularly amongst those of us who work with sharks, in the sanctuary or in the tourism sector generally – is that other island nations see the benefits of protection and follow suit. In Florida, just 50 miles away, great hammerheads (listed as endangered on the IUCN Red List) are only protected in state waters.

in 2011, the Bahamas banned commercial shark fishing and prohibited the sale, trade and possession of sharks or shark parts. 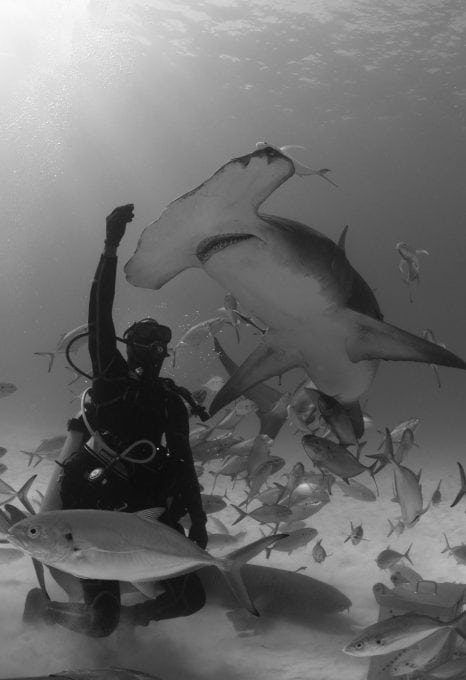 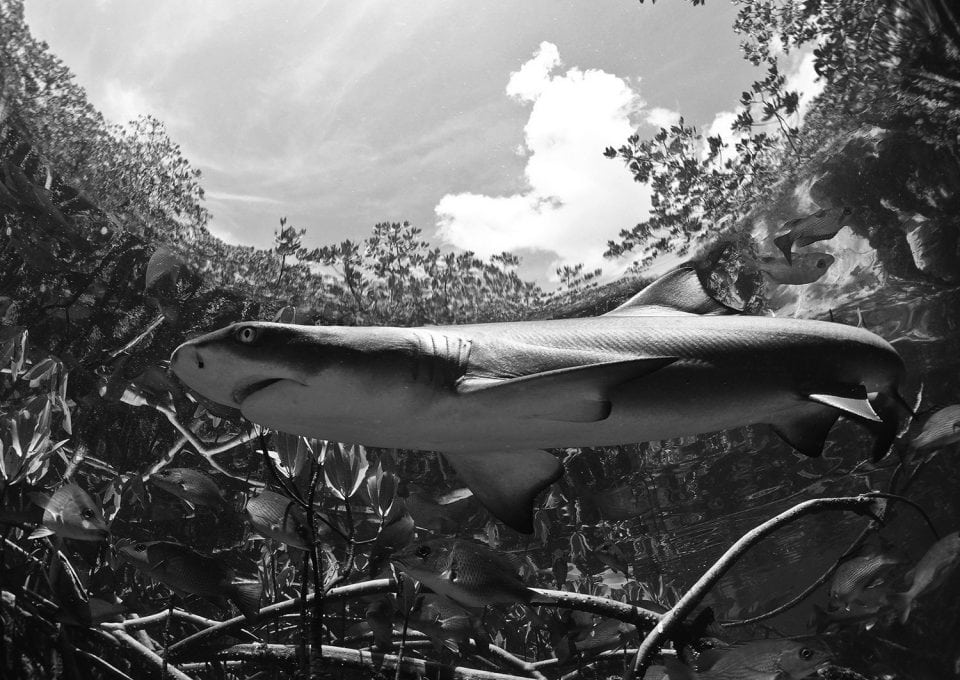 In 2014, PEW, in partnership with the Bahamas National Trust, hosted a shark conservation workshop in Bimini. Dignitaries and officials from across the Caribbean, including the former president of Costa Rica, spent three days on the island learning about the work being done and why it has been successful. They visited the Sharklab and got to snorkel with Caribbean reef sharks and great hammerheads. Richard Branson visited and discussed the importance of establishing a greater Caribbean sanctuary, highlighting not only the success in the Bahamas, but also other shark sanctuaries in the region.

The Bahamas has set a good example regarding shark conservation and continues to be a force for good. As new dive operations open and new shark diving spots are discovered, the value of the Bahamian shark population will only grow. The experience offered to visitors is also critical – diving with sharks can reshape attitudes and opinions, changing the way people see these animals. It might just be what saves them.