Around Tanzania’s Mafia Island, the Marine Megafauna Foundation (MMF) highlights the need for long-term population monitoring of the world’s largest fish with the help of citizen scientists.

Mafia Island in Tanzania is one of those whale shark hotspots where divers are almost guaranteed to bump into one of the charismatic giants when sinking below the surface. The world’s largest fish aggregate here to feed, as Dr Chris Rohner, principal scientist with MMF, an organisation created in 2009 to research, protect, and conserve the populations of threatened marine megafauna around the world, points out: “We see mostly large juveniles at Mafia Island, ranging from 2.5 to 10m long. Most of them are somewhere between 5 and 8m. Whale sharks are born at ~60cm, so we don’t see the small ones, and we also don’t see the large, mature sharks in the area. This is similar to most other coastal whale shark aggregations around the world. At that life stage, they are mostly interested in eating lots of plankton and growing up as fast as they can. At Mafia Island, there are dense patches of sergestid shrimps, a type of large zooplankton, which the whale sharks target. There seems to be food available for whale sharks here throughout the year, which is probably why many of them stick around.”

The unusually resident whale shark population off the island allows the MMF to apply robust capture-mark-recapture modelling techniques to estimate its population trend; an important field of research that seeks to find out more about the relationship between the rare mortalities of the group that seem to nevertheless keep the population from recovering. Rohner says: “Mafia Island was the perfect place for this investigation. We see many of the same whale sharks year after year and have gotten to know them really well.” MMF senior scientist Dr Steph Venables adds: “These high re-sighting rates also mean that the models estimate abundance with a high level of precision.”

We see many of the same whale sharks year after year and have gotten to know them really well. 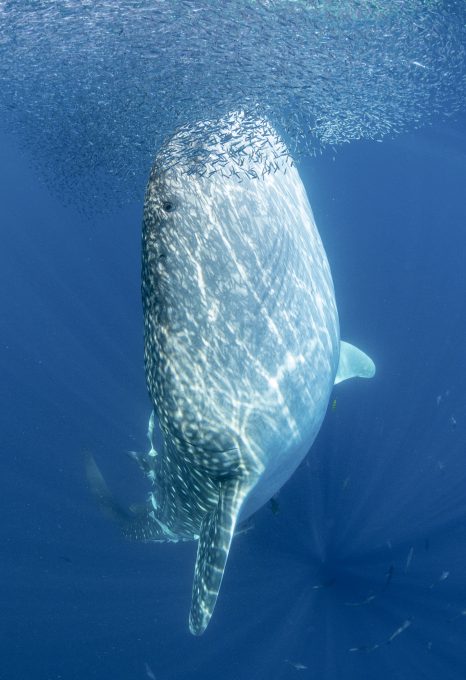 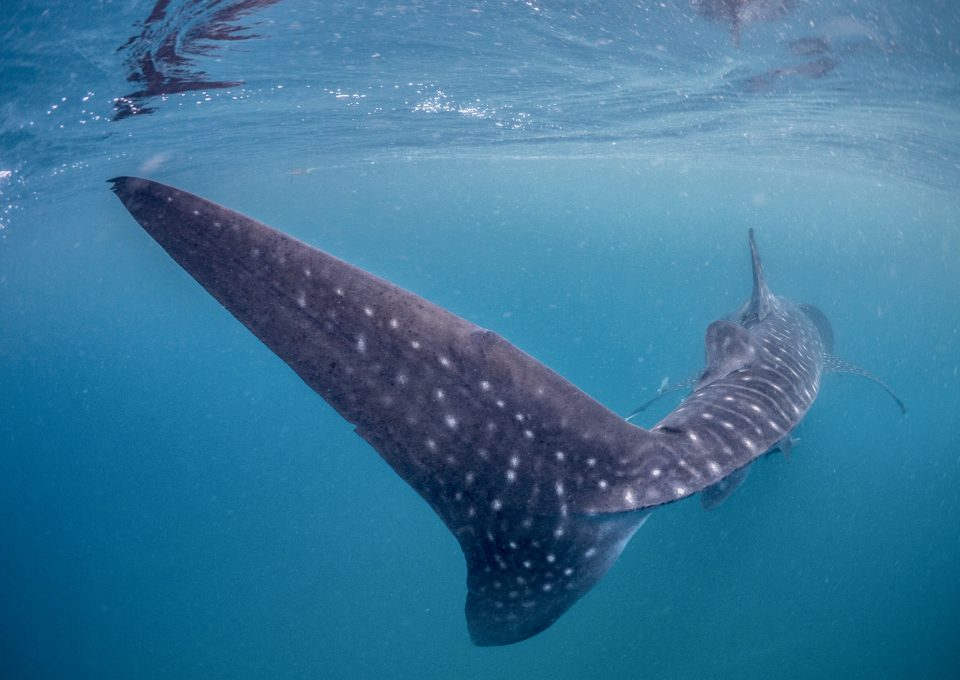 Capture-mark-recapture (CMR) models calculate parameters such as the probability of new sharks entering the population and the probability of re-sighting an individual. From these parameters, MMF researchers, in collaboration with the King Abdullah University of Science and Technology (KAUST) and the Tanzania Fisheries Research Institute (TAFIRI), were able to estimate the population size in each year and derive the trend from those figures.

Whale sharks can be identified by their spot pattern, similar to fingerprints in humans. Instead of capturing, marking, and recapturing individuals, like the name of the models suggests, whale sharks can be identified without interference. Dr Clare Prebble, senior scientist at MMF, explains that “to get the data to monitor whale sharks, we swim alongside each shark and take a photo of their unique spot pattern. Back on land, we let an algorithm compare the spots of the sharks we saw to the whole Sharkbook Database, where it either re-identifies them as previously seen sharks, or we get to add a new one to the catalogue.”

The number of whale sharks in Tanzania fluctuated over the study period, but the overall trend was stable. There are few direct threats to whale sharks at Mafia Island, although mortalities in fishing nets in the country are sometimes reported. “The main threats to whale shark populations globally are fishing, ship strikes and pollution. These threats are relatively low at Mafia Island, although we do see whale sharks with big scars or injuries from when they got hit by a boat, and some mortalities in fishing nets have been reported in the country. Even though whale sharks face a relatively low level of threats at Mafia Island, their population still did not increase over our study period. Whale sharks grow very slowly and start reproducing at an old age, so any added mortality can have a big impact on their populations. That is why it is important to further reduce these impacts to ensure population recovery,” explains Rohner.

“Our study shows that even a small level of mortality from human causes can stop whale sharks from recovering from historical overfishing in the Indian Ocean. Whale sharks take decades to reach adulthood and probably only breed every few years. We need to protect whale sharks, particularly at important aggregation sites like Mafia Island, to help them rebuild a healthy population,” says Dr Simon Pierce, MMF founder and global authority on whale shark conservation.

The research estimated a total of 208 whale sharks spent time at Mafia Island over the eight years. Dr Baraka Kuguru from the Tanzania Fisheries Research Institute adds: “This is a comparatively small population, and we need to look after these gentle giants. Whale sharks are important to Mafia Island’s economy, attracting marine tourists and local fishers often find their catch when they see whale sharks.”

Additional modelling of the abundance trends showed that only dramatic decreases or increases would have confidently been detected over the study period. Despite the comparatively high re-sighting rates at Mafia Island, abundance fluctuations over the years were still too large to detect more subtle trends. Dr Jesse Cochran from the King Abdullah University of Science and Technology adds: “Our case study in Tanzania highlights that whale sharks need protection even when abundance trends are not yet conclusive, which is known as precautionary management.”

The findings highlight the need for long-term population monitoring and precautionary management of whale sharks over several decades. In their case study, a small population of whale sharks monitored over eight years showed a stable trend, however, modelling techniques revealed that only a dramatic ~25% change in abundance could be detected confidently over the study period. Such steep decreases could quickly lead to the demise of a population before management interventions can stop the decline. Precautionary management is, therefore, crucial to saving this endangered species from extinction. Since smaller changes in abundance take longer to detect, long-term monitoring is important to determine these trends and adjust protection strategies if needed. In short: Due to slow abundance trend detection, whale sharks need effective protection now to help them recover from severe population declines over the past decades.

The research estimated a total of 208 whale sharks spent time at Mafia Island over the eight years.

We have shown that long-term surveys are needed to accurately estimate population trends.

Luckily, anyone with an underwater camera can join the whale shark monitoring effort by submitting identification photos to the global database www.sharkbook.ai, highlighting the importance of citizen science in whale shark research globally. “Whale sharks have a beautiful spot pattern on their skin, and we can use that pattern to identify each individual whale shark. The standardised area for photo-ID is a box from the fifth gill slit to past the pectoral fin – basically the flank of the shark behind its head and in front of the big first dorsal fin. Then we just need to know where and when the photo or video was taken, and a clever algorithm compares the spot pattern to all the others already in the database. The uploader then gets an email on which shark it was, and anytime in the future that shark is seen again another update is sent. It’s a fun way to get involved and stay connected to the whale shark you saw. For us researchers, these sightings data are the basis of most studies we conduct. Our recent paper, for example, uses these sightings histories of each whale shark seen in Tanzania to estimate a suite of demographic parameters for the population,” says Rohner.

Over the next few years, the MMF monitoring programme around Mafia Island will continue as Rohner explains: “We have shown that long-term surveys are needed to accurately estimate population trends, and Mafia Island is a good case study to test this further as we get more data coming in.”

We have shown that long-term surveys are needed to accurately estimate population trends.