New research by the Marine Megafauna Foundation, has extended the southern range of the reef manta ray (Mobula alfredi) in Africa, connecting the longest monitored and highly vulnerable population of reef manta rays in southern Mozambique to the UNESCO World Heritage site of iSimangaliso in South Africa. Citizen science contributions combined with opportunistic fieldwork in South Africa, resulted in the extension of the species’ southern range by approximately 140 km to Mdumbi Beach and has provided the first confirmed international movement records for the species, highlighting gaps in knowledge to encourage more focused research on manta rays along the east coast of Africa.

“As highly mobile species, reef manta rays are capable of long-range movements, so it was only a matter of time until we documented international exchange between the waters of adjacent countries. We are thrilled to have finally confirmed this for the first time through rigorous, long-term research efforts along the southeastern coast of Africa,” explained Dr. Andrea Marshall, one of MMF’s principal scientists who oversaw the project.

MMF’s manta ray research programme in Mozambique has been monitoring the southern Mozambican population for over 20 years, making it one of the longest and most comprehensive manta ray studies globally. Their previous work has found a steep decline in manta ray sightings over the past two decades, highlighting it as an at-risk population. A critical part of the team’s focus is to better understand where and how far this species moves in order to guide effective management solutions.

Dr. Stephanie Venables, who completed her PhD thesis on the Mozambican manta ray population, noted: “These cross-border movements are an important finding, as they demonstrate the need for cooperative species management between the neighboring countries.”

Citizen science played a significant role in the study with the SCUBA diving community submitting ID photos of mantas in South Africa to MantaMatcher.org. Manta Matcher, the Wildbook for mantas and other rays, is the global online database for rays. It is open access, easy to use which allows for the cross-referencing of regional databases using automated pattern matching algorithms, which can lead to exciting discoveries like this one. Anna Flam, global manager of Manta Matcher said: “Citizen science contributions were critical to this research. The fist two transboundary movements were detected with public submissions to Manta Matcher, showing how people everywhere can contribute to conservation science.”

Michelle Carpenter, PhD candidate at the University of Cape Town, who began managing South Africa’s manta ray photo-ID database in 2020, added: “South Africa has been a missing piece of the puzzle for some time and there is still a lot of work needed to understand manta ray habitat use here. At first it was overwhelming to narrow down hotspots and build up a photo ID database along such a large coastline, but citizen science support has been instrumental to the process. It is a great example of how public contributions can directly support research.”

The long-term monitoring and photographic contributions from the public have thus highlighted six transboundary movements providing the first evidence of connectivity between reef manta ray aggregation sites in South Africa and southern Mozambique. The longest one-way movement captured was an individual which traveled between Tofo Beach, Mozambique and Sodwana Bay in South Africa in less than 301 days which resulted in a straight-line distance of 505km. Notably, one individual made a return trip between Zavora in Southern Mozambique and Sodwana Bay and travelled a total distance of at least 870km. 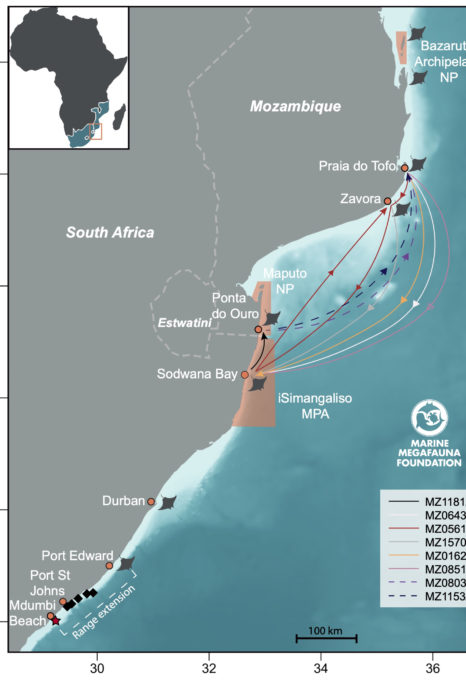 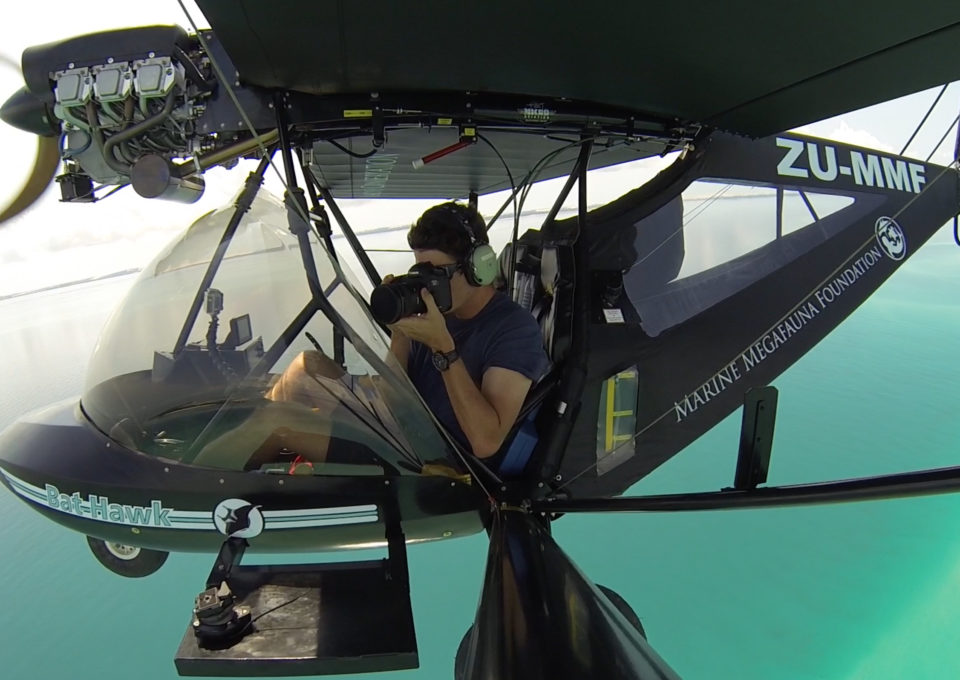 During aerial surveys and in-water encounters at the annual Sardine Run off Port St. John’s in South Africa, reef manta rays were seen with the small size of individuals indicating a potential nursery habitat in the region. Janneman Conradie, MMF pilot and field researcher, was surprised the first time he saw a reef manta ray during an aerial transect at the Sardine Run, which takes place every year along the Wild Coast of South Africa’s Eastern Cape Province. However, after 100 days of flying, totalling 335 hours of survey time, he was convinced it was no coincidence. He remembered: “At first it did not seem like the right habitat for them, but with increased sightings we had to concede that this area may in fact be a nursery habitat for reef mantas, with all encountered individuals being less than 2 metres in length.”

The MMF hopes that these findings support the Convention on Migratory Species (CMS) listing for reef manta rays, suggesting transboundary management units are warranted for this wide ranging species. The MMF team has worked alongside the Ecuadorian government in the past to help champion the initial listing of giant oceanic manta rays on the Convention for Migratory Species (CMS) in 2011, using data from tagging studies to demonstrate the highly migratory nature of this species. The subsequent addition of reef manta rays to the appendices of CMS in 2014 was justified by the highly mobile nature of manta rays, despite the lack of direct evidence to support international exchange of individuals between countries.

“We are pleased that our research efforts continue to produce data that can be used for the on-going conservation and management of manta ray species, particularly off southern Africa where populations are under significant threat,” Dr. Marshall concluded.

The study, entitled ‘Southward range extension and transboundary movements of reef manta rays Mobula alfredi along the east African coastline’ was published in the Journal of Fish Biology in December 2022 and can be accessed here.