The Dalmatian pelicans of Lake Kerkini offer a rare opportunity for some good news.

Since conservation measures have been put into practice across Europe the largest member of the pelican family has enjoyed a population boost, securing a downgrade from Vulnerable to Near Threatened on the IUCN Red List. Globally however, the Dalmatian pelican remains under threat, with a global population of between 10,400 and 13,900. Despite a European recovery, the worldwide population trend is decreasing.

On Lake Kerkini, Greece, this recovery is particularly noticeable, especially since the implementation of artificial platforms by the local management body contributed to the expanding of their breeding range. It is also a unique trait of the pelicans here that, rather than being wary and shy, these gentle giants are curious and calm around humans. The artificial lake, which was first formed in 1932 with the creation of a dam on the River Strymon, is protected by the Ramsar Convention and is an area of the European Natura 2000 Network. The size of the lake varies from 54,250 to 72,110 acres depending on the season.

The lake is a very important area for migratory birds, providing both breeding grounds and a safe ‘stopover’ for birds to rest on their long migrations. Lake Kerkini, which is fed nutrients by the river Strimonas, is rich as a food source, making it a biodiversity hotspot. Situated in an area that collides with an important flyway for migratory birds, it’s the perfect spot of Dalmatian pelicans. I had to see it for myself.

Despite a European recovery, the worldwide population trend is decreasing. 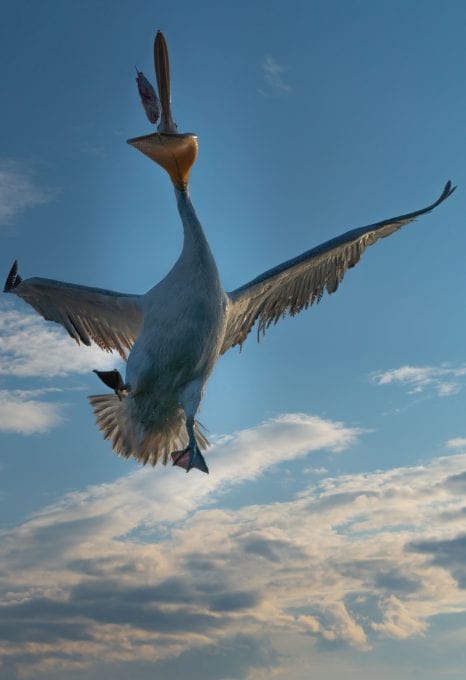 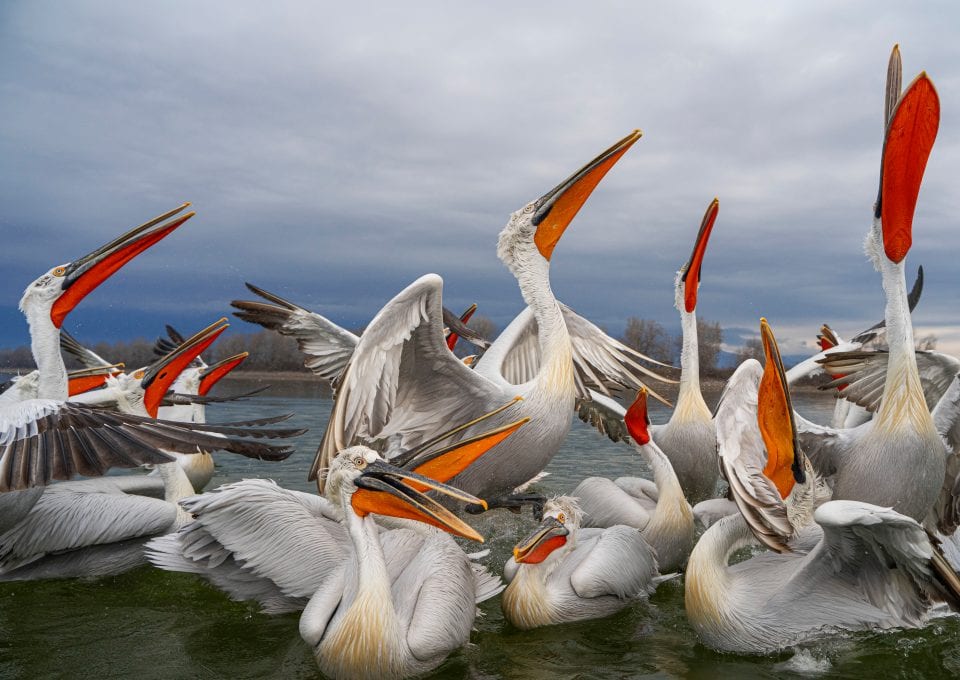 The fisherman who was driving our boat had a soft spot for specific birds, crooning at them like they were his pets. He recognised individuals based on their behaviour among the thousands of birds, calling out the names he’d given them. It’s a fully immersive experience – the sound of the birds calling to one another dominates the landscape, and we drift so close to them their smell fills my nostrils as I lift my camera. My guide explains that they don’t scatter as this species might do elsewhere because they have grown familiar with those who manage the lake day-to-day.

We found a spot and sat for a while on the shore. It wasn’t long before approximately ten pelicans appeared from the deeper areas and drifted closer to our patch of shoreline. Habitually, I took my camera in my hands and started taking pictures, but after a few minutes I felt the need to put it to one side and just to watch the pelicans for a while. It brought me a lot of joy and I was curious to find out how this beautiful bird explores the world around it, how they fish, and how intelligent they are. I watched some relax on the shore, cleaning their wings with their long beaks.

Pelicans live in colonies. When they choose their place of residence, they spend around a week building their nests using reed roots. The Dalmatian pelican likes to fish, and scientific studies have shown that every day each individual eats about 1.2kg of fish and other aquatic animals. The way they fly, unfurling their enormous wings with grace and power, is captivating. They have a wingspan of almost three metres and weigh more than 10kg; it’s quite something to see them take off. 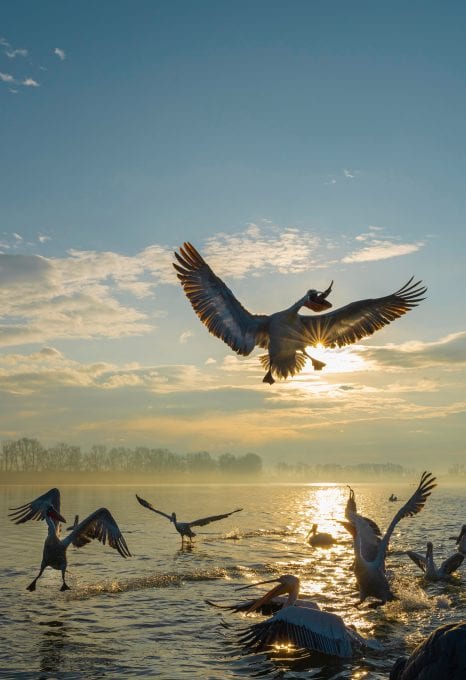 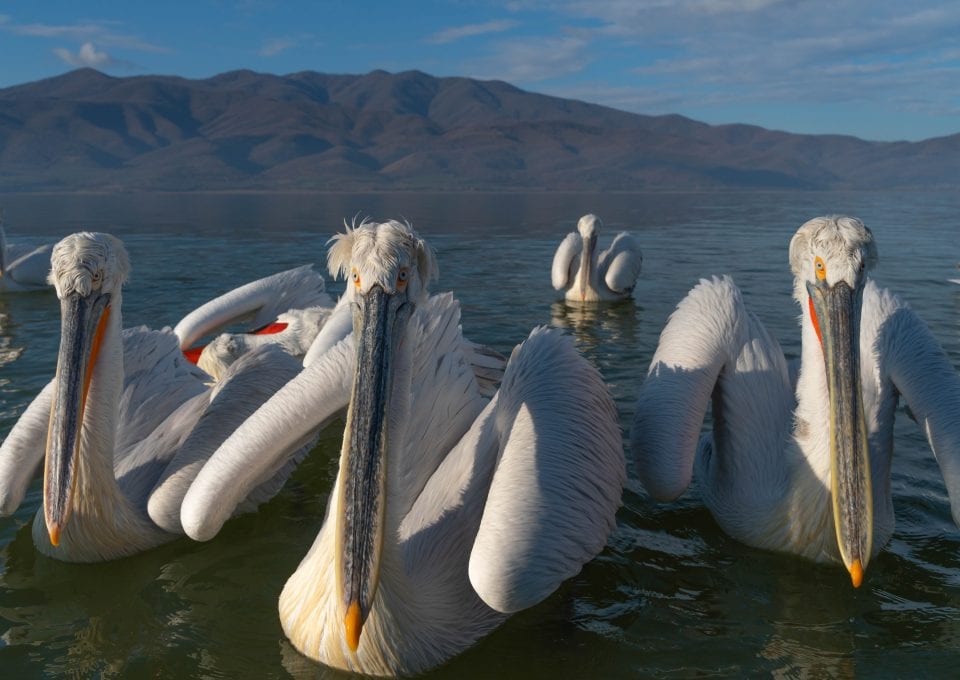 Now, there are six breeding colonies across the country.

Kerkini used to be one of the two most important wintering areas for the Dalmatian pelicans, however, for a period from the 1980s the water level would rise higher and higher each spring, meaning the birds couldn’t breed or build nests on the lake. It was agreed that expansive conservation initiatives needed to be put in place. From 2002-2003, WWF Greece collaborated with the lake’s management body to build wooden platforms near to those islets that the birds were using as breeding sites. The platforms were higher than the maximum water level, so there was no danger of flooding the nests. In early spring of 2003, the first seven pairs bred successfully for the first time in the area. That was the beginning of the third newest colony of the species in Greece, and the newest colony of the species for almost 150 years. The number of the breeding pairs nesting on the platforms continued to rise, reaching more than 60 pairs nesting in 2011. In 2015 a big island was created for the pelicans in order to give them more space. The numbers of breeding pairs continued to increase, reaching more than 250 pairs in 2018-2019.

These figures from Kerkini contributed to an important population increase of Dalmatian pelicans across Greece. Now, there are six breeding colonies across the country. The species also started to expand its range and started to breed in nearby Albania and Montenegro – before, the only European countries known as Dalmatian pelican breeding grounds were Romania, in the Danube Delta, Bulgaria and Greece, on Prespa Lake and the Amvrakikos Gulf.

However, they do still face certain threats. In some areas, birds of prey steal eggs from their nests, but for the most part, it’s human activity that has the most impact. People disturbing breeding colonies, illegal hunting, habitat destruction or power cables and wind turbines interrupting their migration routes – these all contribute their globally diminishing numbers. Fortunately, strict rules ensure that there is no such thing in Lake Kerkini.

The Dalmatian pelican is protected both by international treaties such as the Agreement on the Conservation of African-Eurasian Migratory Waterbirds (AEWA) and by Greek law, which prohibits its hunting and disturbance in its breeding grounds. The work done at Lake Kerkini proves that through simple conservation efforts, the survival of a species can go hand-in-hand with tourism. By protecting rather than exploiting these beautiful birds, the management body of the lake has ensured their survival in this region and provided an extremely desirable destination for birdwatchers and photographers, who visit from all over the world to experience the Dalmatian pelicans.

Now, there are six breeding colonies across the country.