It is September, and it is crab season in Mercedes, Philippines. Rodel Bolaños, a 43-year-old fisherman of Caringo Island, rises and leaves for the beach at 4:30am, pulling a red Nike baseball cap over his head.

He heads through the waters of San Miguel Bay toward his crab traps to check for their catch, sharing space on his boat with fellow fishermen Edgar Garcia and Santiago Camatoy. Rodel triangulates the crab traps’ location, based partly on landmarks and other visual cues, and partly on memory.

He arrives at each trap, signalled by a bobbing orange buoy at the water’s cool, dark green surface. The traps are long, rectangular frames wrapped tight with netting, weighed down on the sandy bottom with an anchor. When he pulls them up from the line by which they are strung, a crab will sometimes show up inside, its brilliant colours shining through a saltwater sheen. Some are as bright as cornflowers, with purple and blue mixing across their spotted bodies like watercolour paints bleeding together. Others look like crawling Neapolitan candies, their shells a mixture of pink, brown and white. Even after Rodel pulls up the crabs and brings them back to shore, these creatures and their capture will be constant fixtures of his day.

Hot, cooked crabs and heaps of rice make for lunch back at the Bolaños household, a meal for Rodel, his wife Ronilita, and their four children, 19-year-old Ian, 17-year-old Regine, 13-year-old Rabein, and 1-year-old Thali. A growing pile of cracked shells and claws forms at the centre of the table as the Bolaños family finishes their food. It is the same table where Rodel and his wife will record the stats from his morning catch. He will place each bounded-up crab on a light pink scale, while Ronilita takes down its weight. They’ll place measuring tape across the length of each crab’s shell, and take that number down as well. Every three or four days, Rodel will transport the catch to Noal Cereza, a broker 45 minutes across the bay in Mambungalon. They will usually fetch him about US$21 a day, out of which comes fuel and bait expenses, savings for future boat maintenance and repairs, and an equal cut for his boat mates, Edgar and Santiago.

In the afternoon, Rodel works on the traps. He makes around 20 traps each week, constructing them carefully by hand to make sure they will withstand the rolling ocean for as long as possible, and catch him crabs as reliably as they can. He builds the traps’ frames from metal and wood, sews long sheets of netting into tubes and stretches them taut over the frames. He cuts and ties knots into sturdy yellow cords that will hold the various parts together. Thali runs around among her father’s stacked traps, a bright, bouncing little figure against the netting in her pink tank top. Rodel will occasionally pause from his task, scoop her up, and dance and croon and talk to her. Once she has burned up her energy, she falls asleep on a pile of blankets in a big hammock fashioned out of the traps’ netting. Rodel continues his careful work. 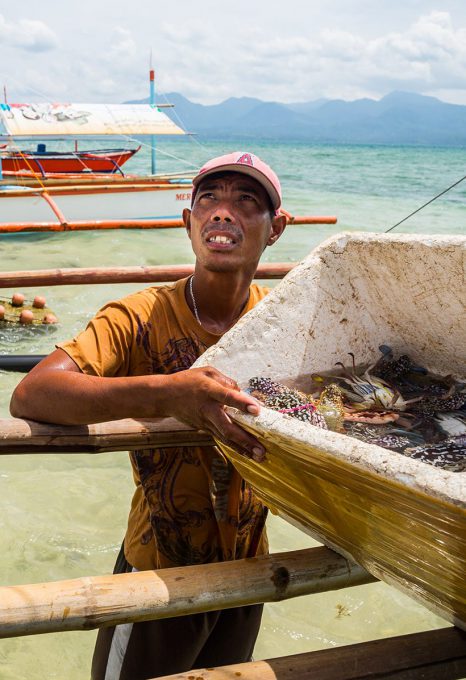 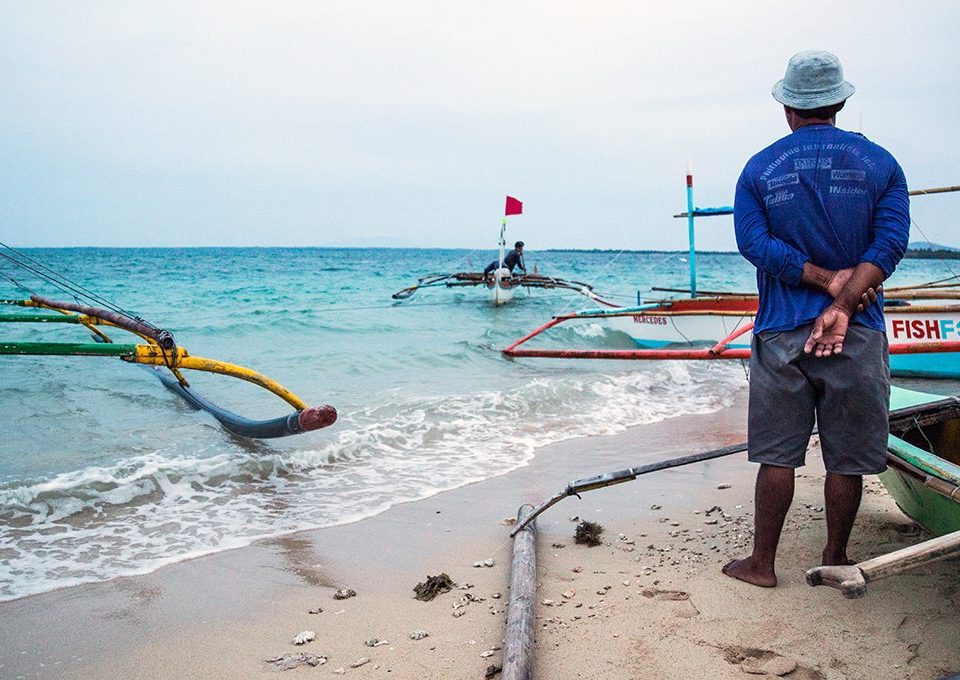 There is a harmony that exists between Rodel and his crabs. He depends on them for food and income, catching and consuming them daily. But as a responsible fisherman, he respects their place in nature and allows their populations to reproduce and grow. He understands the ties that fishing has to his own life. The responsible fisher steps back from the juvenile, the pregnant, and the overfished populations of crabs and fish, and gives them room to enrich the fishery with their numbers. Responsible fishing is sustainable fishing – acknowledging that the ocean is not an endless, indestructible supplier of natural resources, and that the wildlife within it and the human life above it depend on balance.

In Rodel’s home of Caringo Island, as well as many other coastal communities in the Philippines, that balance has been disrupted for decades. For a growing number of fishers, unsustainable fishing practices have become routine, and those taking part in them have become detached from the consequences. There are many forces at play in the onset of unsustainable fishing. Ever-growing demand for fish brought on by an ever-growing coastal population compels many fishers to adopt a mind-set of ‘the more, the better’, to meet the need. In coastal fisheries near the shore, where fisheries are not sufficiently managed and all fishers – coastal and commercial, local and migratory – often fish from the same grounds, overfishing is rampant and fishery abundance is declining. This trend is made worse by destructive and illegal practices that fishers have picked up to try to catch more, such as the use of fine mesh nets and dynamite fishing.

Rodel Bolaños pulls up more than 100 crab traps every day, and only brings back a handful of crabs. Ten years ago, traps the size of Rodel’s could catch ten crabs each, but today, in the same bay, a good day might mean bringing back 20 to 30 crabs in total. In their reliance on fishing and in their increasing struggle to catch enough to provide for their families, Rodel and millions of other coastal fishers are on the front line of a global resource crisis: the decline and potential collapse of coastal fisheries.

Rare is working to help these fishers and their families stop the decline and the practices that proliferate it, by placing fishers at the centre of our sustainable fisheries management structure. As the people closest to and most affected by the problem, they are critical to the solution. Rare’s approach is global in reach, yet community-powered. It empowers coastal communities like Caringo Island to collectively take responsibility for the state of their nearshore fisheries, and design and implement a management approach that secures fishing for the future.

There is a harmony that exists between Rodel and his crabs. As a responsible fisherman, he respects their place in nature and allows their populations to reproduce and grow.

Rodel and millions of other coastal fishers are on the frontline of a global resource crisis: the decline and potential collapse of coastal fisheries.

In this approach, marine protected areas are combined with areas of managed fishing access, which grants local fishers exclusive rights to designated nearshore fishing grounds. Eliminating the free-for-all in the coastal fishery, the approach gives fishers a space to sustainably fish while incorporating the conservation power of marine protected areas.

Throughout the adoption of ‘managed access + marine reserves’, communities and their unique needs and concerns remain the top priority. Rare works with communities to identify the challenges they have encountered in their fisheries and their goals for new management. Together, they look at the rare local species and habitats that are being threatened by unsustainable fishing in the area. Rare evaluates the existing protected areas that communities can work with to create their areas of ‘managed access + marine reserves’. As a community begins its work creating and adopting these areas, Rare is there to support each step, including mapping out the areas’ boundaries and drafting up the ordinance to get the areas passed into law. At the same time, Rare works with governments and other important stakeholders at the national level on policy that will enable communities to implement ‘managed access + marine reserves’ more easily and efficiently.

Regardless of whatever potential for sustainability Rare’s approach may be able to fulfil however, it is up to coastal communities to embrace this approach and ensure its longevity. Through Rare’s behaviour change campaigns, led by local leaders called Rare Fellows, Rare works to inspire communities to see responsible fishing as the new norm, in which overfishing and habitat destruction are not acceptable, and the balance between people and nature comes closer to being restored.

Under the leadership of Rare Fellow Mike Totanes, Rare begins its work with Caringo Island and the rest of Mercedes’ coastal communities. Seeing how much fishing has changed over the years, Rodel Bolaños is ready for a change. “We believe in these programs and how important they are, as our fishing harvests have really gone down,” says Rodel. “I like the program because it will really help us fisher folk maintain the ecological balance and the productivity of our livelihood. I believe in due time, our fish stock will increase with these programs in place.”

Rodel and millions of other coastal fishers are on the frontline of a global resource crisis: the decline and potential collapse of coastal fisheries.