Guardians of the ocean

Guardians of the ocean

MADAGASCAR IS THE WORLD’S FOURTH LARGEST ISLAND AND ONE OF THE POOREST COUNTRIES, WITH MORE THAN 70% OF PEOPLE LIVING BELOW THE POVERTY LINE.

Coastal resources are being rapidly depleted and there are relatively few marine management systems in place.

Coastal communities are amongst the most isolated and marginalised on the island, and around 500,000 people rely on fisheries for their livelihood. These fisheries are under increasing pressure from a growing coastal population and commercial fishing activities, the use of unsustainable fishing practices, insufficient fisheries governance, and the impacts of the climate crisis.

Both fisheries and forests continue to be crucial sectors in Madagascar’s economy on a commercial scale, yet these resources require sensitive management to ensure they can be harvested sustainably for the future. Due to a lack of livelihood alternatives and effective governance of natural resources, the country’s roughly 300,000 hectares of mangroves are being unsustainably reaped by local communities for fuel, food and construction material, putting people at further risk from sea level rise and extreme weather.

Madagascar’s fisheries have traditionally been open access, but across the island fishers are reporting a decline in catch compared to when they were children, heading out on the small boats with their parents.

When I was a little girl growing up in the capital city of Antananarivo, my dream was to become a lawyer, so that I could defend people. Unfortunately, this dream was quickly scuppered, as I failed the law entrance exam and university. Disappointed, I opted to study geography instead. However, I am now the lawyer of the fishing communities of Madagascar. I defend their rights, nationally and internationally.

the country’s roughly 300,000 hectares of mangroves are being unsustainably reaped by local communities for fuel, food and construction material 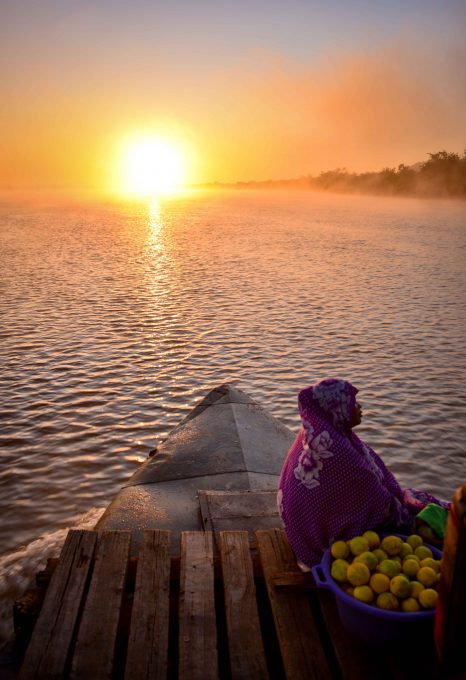 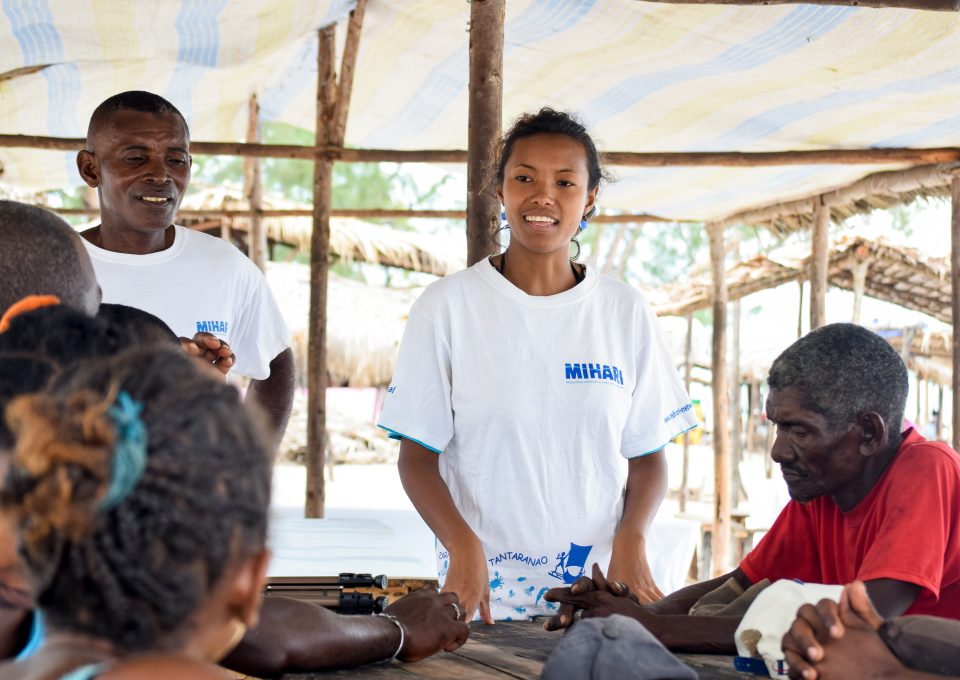 In 2013 I was selected to carry out a research project that was supported by the United Nations’ Nippon Foundation. It focused on the improvement of Madagascar’s small-scale fisheries – mostly people who are fishing for their own subsistence rather than for selling. I realised that coastal communities along the 5,000km of coastlines needed to engage in local marine management, as they were not only best placed to do so, but also had the most to gain from protecting their fisheries.

I joined MIHARI (Madagascar Locally Managed Marine Area Network) in 2015 as Network Coordinator. MIHARI is a platform set up to bring fishing communities and organisations together to safeguard marine resources and wildlife. It represents the voices of the small-scale fishermen and women in Madagascar, so they can address the issues together. We need to empower coastal communities for sustainable fisheries, because they are the guardians of the ocean – we need to value their traditional knowledge.

I am, in a way, an ambassador for these coastal communities. Before now, their voices would never have been heard. I care deeply about these communities, help them to travel and meet with decision-makers, help them to share knowledge, listen to their needs and help them to find solutions to the many challenges they face. We share their stories with the Government and those living in Antananarivo, hundreds of kilometres from the sea, who would never hear about them otherwise.

The wildlife in Madagascar is unique. Approximately 90% of the species here can’t be found anywhere else in the world, the island thought to have been isolated from other land masses for 80 million years. The island’s coral reefs harbour globally important aggregations of biodiversity and include the world’s fourth largest barrier reef system, the Grand Récif de Tuléar. The reef systems of northern Madagascar are second only to the Coral Triangle in terms of the richness of the shallows.

The island’s marine biodiversity also supports the livelihoods of vulnerable coastal communities, including around 500,000 people who rely on fisheries for their income. Beautiful coral reefs, lush seagrass meadows and mangrove forests are sources of both food and other materials that communities need for survival, including construction timber and medicines. These interconnected ecosystems also provide essential ecosystem services, such as filtering sediments from the water, sequestering carbon, and protecting coastlines from erosion and storm surges. Madagascar is a critical priority for international conservation efforts, based on almost unparalleled levels of endemism, species diversity, and human threat.

We need to empower coastal communities for sustainable fisheries, because they are the guardians of the ocean – we need to value their traditional knowledge. 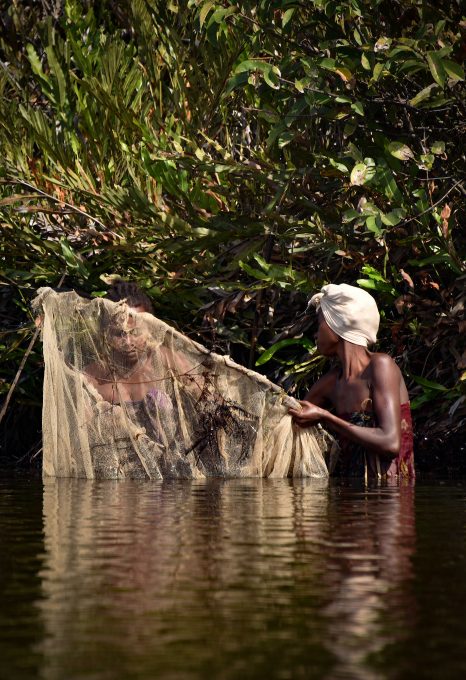 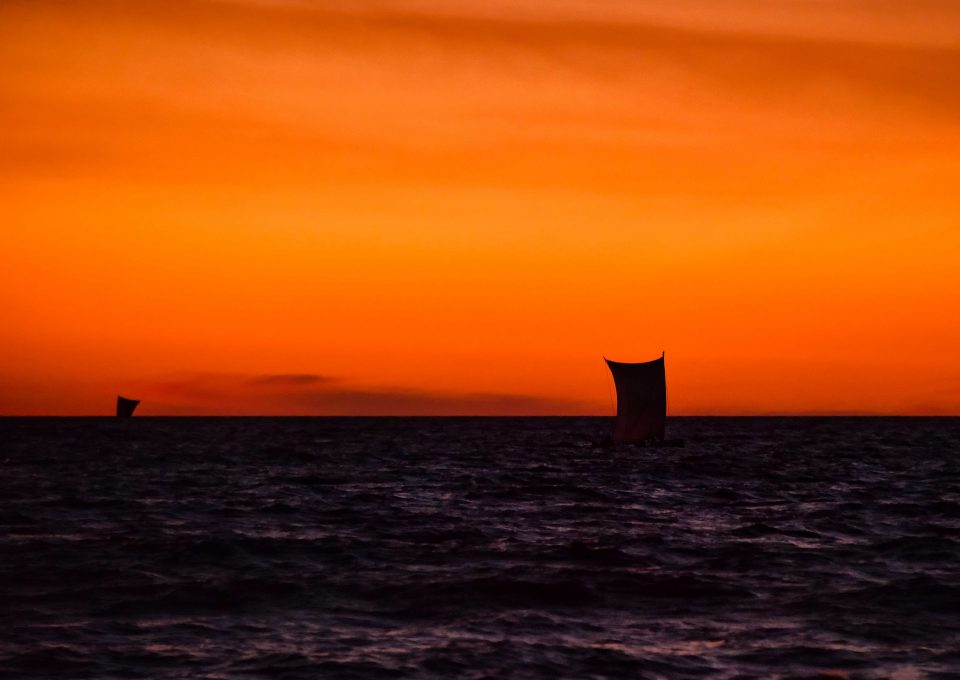 By working together as a team, and planning how to manage their natural resources, they become energised to protect them.

I have learned so much during my time with MIHARI, but the biggest lesson for me has been getting to know the fishers themselves. Before I started working with Madagascar’s coastal communities, I had little understanding of the lives and experiences of small-scale fishers. Having worked closely with them for four years, I am still impressed and humbled by their intimate and detailed knowledge of their environment and fishing grounds, their sensitivity to the conditions of the sea and the weather. Due to their isolation, many coastal communities have limited access to formal education, but their local knowledge is vital for the creation of effective locally managed marine areas (LMMAs).

We are still in the process of developing a system to evaluate the efficacy of LMMAs. However, we have already noticed the increased motivation of these communities. By working together as a team, and planning how to manage their natural resources, they become energised to protect them. This sense of ownership has raised local awareness of the consequences of inaction. They understand now what will happen if they do not replant mangroves, implement fishing closures, develop alternative livelihoods, or establish regulations for managing local resources. We have seen an increase in communities’ solidarity and confidence, and not just at a village level; at regional and national scales – it’s wonderful to see hundreds of fishers working together towards the same goal.

An increasing number of communities are replicating closures and mangrove plantings, and we hear from communities at regional/national fora and learning exchanges that they have found these experiences to be life-changing.

Locally managed marine areas really are the future of sustainable and resilient ocean resources. What drives me is the desire for future generations of fishers to be able to benefit from their local fisheries in a way that encourages marine life to not only survive but thrive. This year, I won a Whitley Award, which means MIHARI can roll out the network to support more fishing communities in three new coastal regions in Madagascar. My hope is that communities will gain more power to sustainably manage their resources and that the threats to the marine life will decrease.

I know it’s possible, and communities are beginning to see that too.

Photographs courtesy of the Whitley Fund for Nature and Rod Waddington.

By working together as a team, and planning how to manage their natural resources, they become energised to protect them.