The Exmouth Gulf falls quiet, absent of the sprays of frolicking humpback whales.

White horses take their place as the prevailing southerly wind drags across the surface of the water, rendering the gulf inaccessible for the adventurer with a humble tinny. Now is the time to take a breath, reminisce, and process a remarkable season in Exmouth and on the Ningaloo Reef.

From whale sharks to dugongs, and from orca to a plethora of baleen whales, the Ningaloo Reef and Exmouth Gulf burst at the seams with giants. Every winter’s day spent on the water is a day of immense anticipation followed by overwhelming satisfaction and appreciation for Mother Nature. But even with a season brimming with successful tours punctuated with surprises of welcome visitors including false killer whales, spinner dolphins, curious whaler sharks, and even pelagic seahorses, nothing could have prepared the tourism community for the events that unfolded at the start of October.

Western Australia boasts the largest humpback whale migration on the planet and with such an event, there is bound to be the odd casualty. In a town that was very much ‘slowing down’, preparing itself for the hot and sleepy summer months to come, there came excited whispers of such a whale. A deceased adult humpback had floated into shallow waters and sunk to the sand. Seabirds flocked, following the scent of an oily slick that exuded steadily from the rotting flesh. It was not the prospect of bird watching, however, which excited the marine enthusiasts in town but of what lurked beneath the surface. Birdseye-view photographs soon emerged of the scene: a glowing white whale carcass surrounded by dozens of sleek, black figures, circling the corpse and enjoying a free meal. Tiger sharks. The phrase: ‘like flies on s**t’ sprang to mind, such was the number of feasting tiger sharks, and the fact that these scavenging creatures were providing the ocean with the equivalent service to that that flies perform on land. The days to follow were crammed with nervous excitement, adrenaline, and camaraderie, with half the town sharing in a spectacle of nature that one will cherish forever. 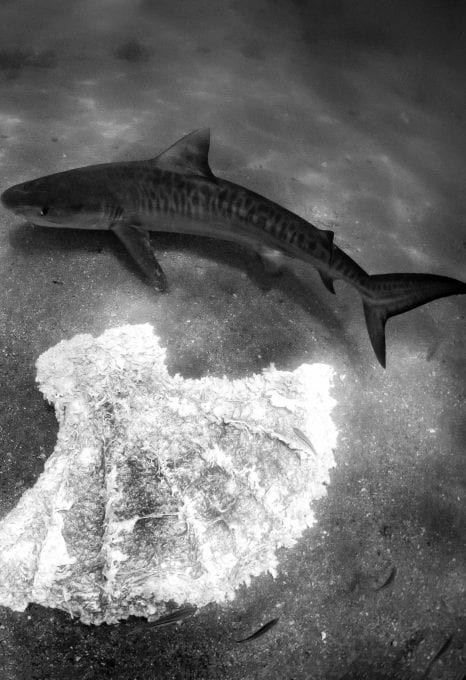 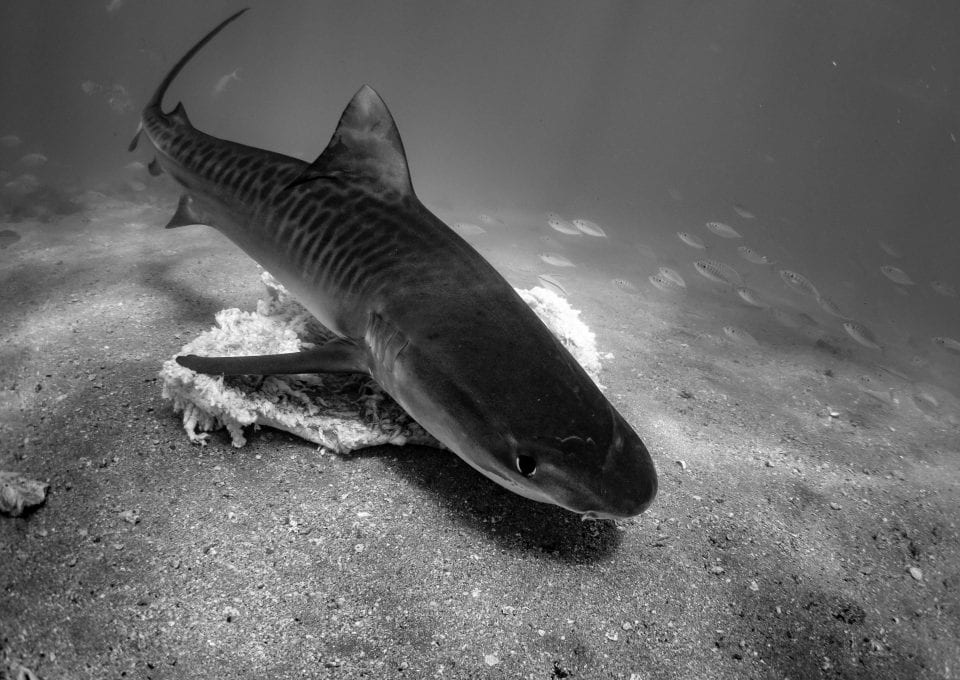 To have one of the largest animals on earth being fed upon by some of the most feared, in three metres of water, 300-400m off shore, seemed too good an opportunity to pass up for any budding photographers or filmmakers. And so it was that early one morning, a handful of pioneers set out to test the waters and experience, first hand, nature in its rawest form.

From the surface the morning light ricocheted off the pale flesh of the whale, creating a white-hot glow, an eerie contrast to the great dark shadows that patrolled the surrounding waters. The smell of death was fierce but, bristling with nervous excitement, several initiates slipped quietly into the ‘shark-infested waters’.

Beneath the whitecaps our heads were on swivels, as we proceeded cautiously and with utmost attentiveness. Out of the grainy mist came the shimmering of flesh and bone, brighter and brighter. A gigantic carcass lay quiet on the sea floor, cloaked by masses of scavenging rabbitfish and scad. Baleen swayed in the current while the lower jaw lay to the side like a colossal archway flat on the sand. We were soon tasting what we had smelled from the surface, unpleasant and sour on the lips. Staying close to one another, with cameras in hand and at the ready, we explored the magnificent carcass. It would only be a matter of time before we got what we came for.

There appeared to be a mutual respect between the sharks and the public.

On the edge of our vision, large shadows glided around the whale and us edging closer with same caution, it seemed, as ourselves. After a couple of passes, the shadows moved closer, becoming figures, sleek-bodied with heavily set heads and wedge-like dorsal fins. Another pass and vertical stripes appeared along their flanks, dappled with the light of the penetrating sun. Piercing black eyes gazed curiously at us aliens before re-focusing on the meat that had lured the tiger sharks here in the first place. Cameras were set to burst and the shutters sounded like automatic rifles as people got their dream shots. Chunky noses nudged plastic and carbon fibre fins, which quickly became unimportant as the sharks continued to feed. A bull shark skated below towards the feast, an inch above the sand, before being bullied off by a tiger shark twice her length. We watched in total wonder as more than 15 sharks tucked into the whale, the sound of crunching cartilage and bone travelling through the water was like that of a falling tree in a forest. The sharks became dogs, as they carried bones from place to place, shaking them to remove every morsel of flesh and sinew. Some had distinguishing scars on their fins or along their bodies, one had a fishing line protruding from the corner of its mouth, but they all had one and the same thing on their mind: the carcass. Upon closer inspection, teeth lay in the sand having succumbed to the aggressive nature of feeding and had been rattled free. For minutes at a time, all the while watching each others’ backs and taking it in turns to duck dive to the bottom, we enjoyed the spectacle for a couple of hours.

Word was spreading and more and more people came down to the beach, launched their tinny, and anchored up next to the most famous whale of the season. Day after day for almost a week people came to watch the marvel unfold, always approaching with care and forever keeping wits on hand. There appeared to be a mutual respect between the sharks and the public, and people shared notes and experiences, and offered advice to each other as to how to safely interact with the tiger sharks. Nothing was taken for granted. As the meat on the carcass became less and less, sharks continued to gather, looking for and expecting a meal. With little meat left and still plenty of sharks around, the time had come to stop swimming with the dead whale and those that fed upon it.

To swim with four-metre long, feeding tiger sharks is not something to be taken lightly. Though we never felt threatened by them we were always wary, we were in their domain and behaved as such. People looked out for each other, friends and strangers alike. Sharks were given the space to feed, and we watched on, got our photos, videos and experiences, and left. Back to Exmouth to share our stories, and back to the regular pace of life, waiting for the breeze to drop enough to launch the tinny in search of what else this enchanting place has on offer.

There appeared to be a mutual respect between the sharks and the public.