ARTIFISHAL: The end of wild

ARTIFISHAL: The end of wild

THE ODD BUT OBVIOUS SOUND OF BANGING DRIFTED FROM THE ALUMINUM CLAD STRUCTURE KNOWN AS THE SPAWNING BUILDING.

It wasn’t the sound of hammer on nail, but something much more ominous. Stepping into the cavernous warehouse on the grounds of the expansive Coleman National Fish Hatchery in Anderson California, we were met with a scene that can only be described as stranger than fiction. The overhead fluorescent light and the humidity amplified the musty smell of dead fish. We filed onto an elevated platform that allowed for better viewing, and soon learned what the banging sound was.

Adult hatchery Chinook salmon were dragged from a water bath and met with an unceremonious end by way of a quick and violent stroke with a short wooden club. The bludgeoning made people wince and children covered their eyes. Eggs were extracted from females by a needle inserted into their abdomen and then propelled into a cistern by way of forced air. Males were milked by bending them backwards and squeezing the reproductive fluids from their body and washing it over the eggs. This was a factory assembly line, but instead of making cars they were making salmon.

And if that wasn’t enough, hanging from the ceiling were a series of closed-circuit TV’s that cycled through various camera angles and closeup coverage of the process. The low-fi images blended with the crowd’s reaction and the brutal reality of what was unfolding before us. This is what salmon have become.

We were here to capture a scene for the upcoming film ARTIFISHAL, a film that I directed for Patagonia and that questions the startling decline and future of wild salmon. Before a career in film I was a fisheries biologist and had managed a small on-campus teaching hatchery at Humboldt State University in Northern California as a way to pay for my graduate degree. But none of that prepared me for the theatrics of what was playing out before us.

This was a factory assembly line, but instead of making cars they were making salmon. 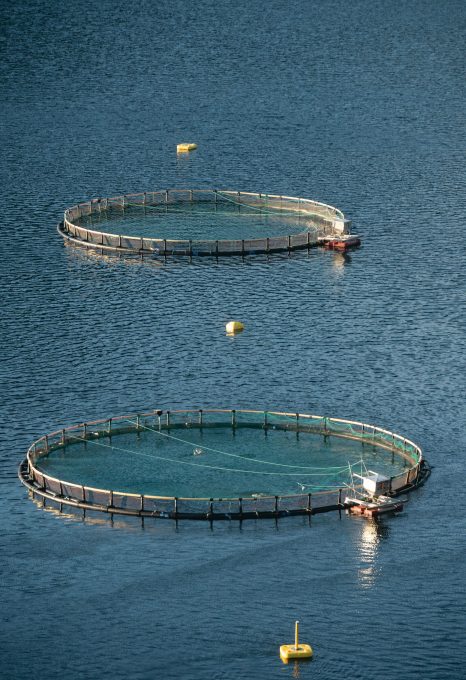 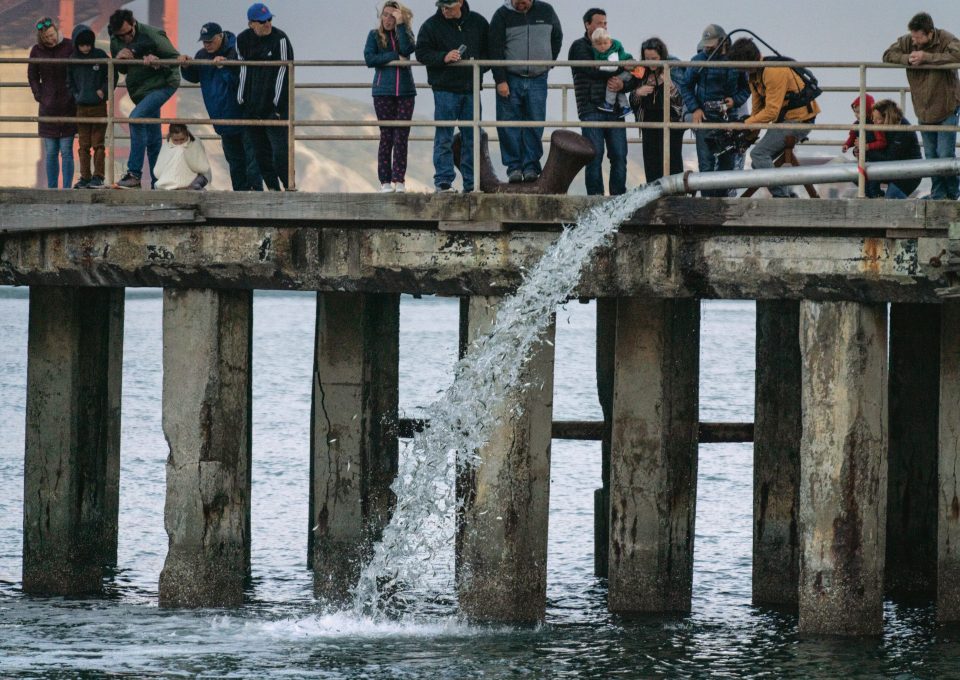 Uniformed government employees corralling and drugging returning fish, bashing them over the head and extracting eggs from ripe females to combine with milt (sperm) from males before chopping off their heads and disposing of the bodies. It was like a bad B-movie zombie thriller where the ghouls had invaded a town and were stealing gametes for some nefarious plot. What would someone think if they just dropped into this grizzly scene, having not received any of the prerequisite and state-endorsed information that created some justification for the viewing?

On the back wall, a high school gym scoreboard tallied the EGGS TODAY and added the number to the EGGS TO DATE. I wondered who was updating the seemingly random numbers. They were obviously celebrating their achievement but part of me couldn’t fathom what that achievement was. A hatchery worker walked towards the crowd gathered above him on the viewing platform, arms extended overhead, and presented a recently killed fish for people to touch. It was all done with a flare of propaganda and the public show was an obvious attempt to normalise something that is far from normal. If you know anything about the wondrous life cycle of Pacific salmon, this is about as far from normal as it could possibly be.

Salmon were once an icon of the wild, with one of the most spectacular migrations in the natural world. Born in clear headwater rivers, they undergo an incredible transformation that allows them to migrate to sea, where they live for two to five years, before heeding some innate call to return to their natal stream of origin, sometimes to within a few feet of where they were born. After spawning they die, and their decaying carcasses infuse a huge dose of ocean-derived nutrients that enlivens the entire food chain, including their offspring that emerge from the stream gravels months later. Their upstream fight can carry them over impossibly tall waterfalls and, in some cases, they travel nearly a thousand miles inland and over 6,000 feet above sea level. Unfortunately, rivers happen to provide humanity with benefits that, until recently, seemed to outweigh the value of salmon and, in turn, the value of wild.

It was all done with a flare of propaganda and the public show was an obvious attempt to normalise something that is far from normal. 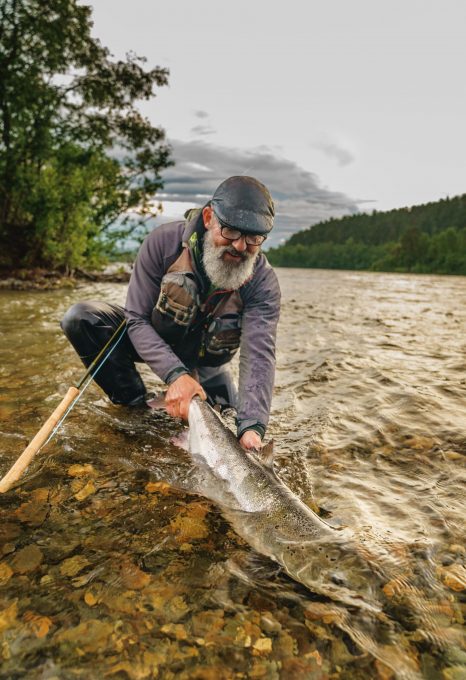 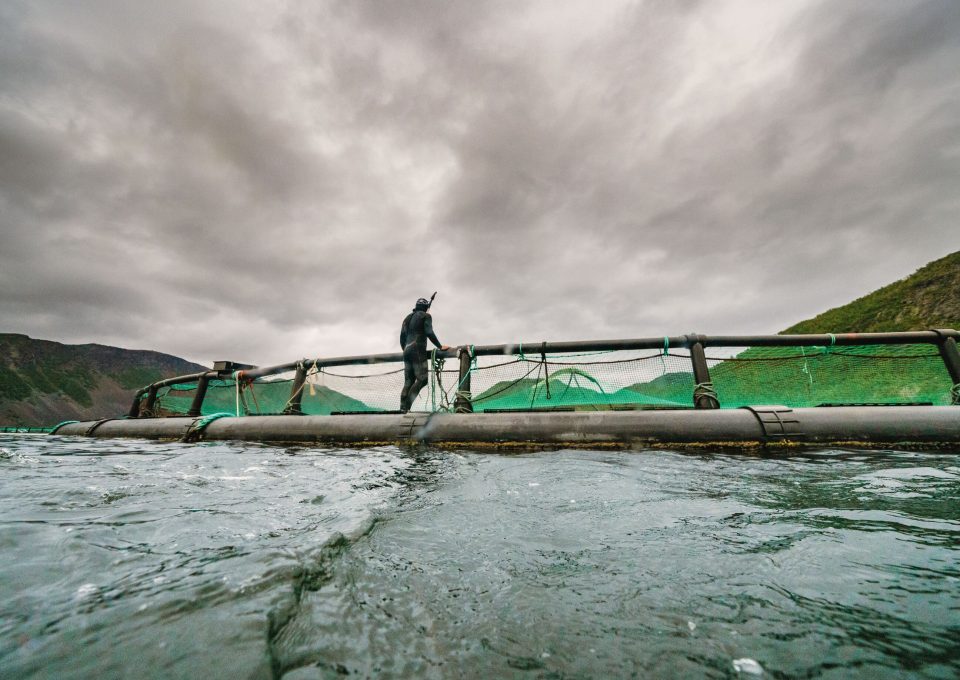 Coleman National Fish Hatchery is the largest salmon hatchery in the continental United States and was established under an act of the US Congress to mitigate for the loss of the historic spawning habitat when the Sacramento River was dammed in 1942. Coleman, like other hatcheries, is taxpayer funded and uses industrial farming techniques to produce more than 12 million young salmon that are then released back into the rivers in an attempt to mask the real impacts of salmon decline and provide commercial and sport anglers with fish to catch.

As has happened around the world, wild salmon were traded away for the benefits of progress. Dams provided power, irrigation, and drinking water to an ever-growing population, but that security came at the expense of wild salmon. When migrating salmon run head-long into an immovable slab of concrete – that’s the end of the line for them. But human produced factory fish are just as good, right?

The idea of hatcheries became a convenient way to encourage greater development of rivers, and once we bought into the idea that humans could do it better, there was no limit to the extent of our manipulation. Most dams on salmon rivers now feature a hatchery at their base. In places where poor forest practices choke rivers with siltation, you don’t have to look far to find a hatchery. They are, in effect, the cost of destroying a river. Even when habitat is relatively unaffected, if the rivers don’t produce enough fish we can fix it by raising and releasing more.

Last year between the United States, Canada, Russia, Korea and Japan more than five billion salmon were released into the North Pacific. The average size of those fish is declining as the carrying capacity of the ocean is being exceeded. Chinook or ‘King’ Salmon in the Salish Sea, between the United States and Canada, used to average 20lbs and now they are averaging 8-10lbs. This is having calamitous effects on entire ecosystems including the critically endangered Southern Resident killer whales whose numbers are in steep decline due to malnourishment. They’re big whales and they need big fish.

In some instances, millions of young salmon are pumped into tanker trucks and driven hundreds of miles before dumping them into the sea and effectively negating the need for healthy rivers. When filming a release like this for the title sequence of ARTIFISHAL one of the hatchery workers made a wonderfully offhand comment that basically summed up the thinking. “The trip we just did normally takes salmon two and a half months, but we did it in two and a half hours!”

When migrating, salmon run head-long into an immovable slab of concrete that’s the end of the line for them.

Back to the scene at Coleman National Fish Hatchery. I was interviewing the hatchery manager about the need for hatcheries as, in my opinion, the best hatchery is a healthy river. With all interviews, I ask only for honesty and let the subjects tell their story. No trickery involved, just the truth as they see it. Through my questions, it quickly became clear that this was not some puff-ball news piece about the good they were doing. I knew what I was talking about and the hatchery manager knew it too. I could see the look on his face when he realised there was a fox in the hen house. As I dug deeper and questioned the future of substituting domesticated fish for wild and the inevitable genetic issues that created, I could see him grow more uncomfortable. When I finally asked him to comment on the current state of our rivers and wild fish, he paused and looked at the ground. When his eyes came back up, I saw the look of surrender. His response to the question was telling. “Pass.”

It is my hope that ARTIFISHAL exposes the status quo for what it is, the commodification of rivers and fish rather than the recognition of fish as wildlife. I also hope it begins a greater conversation about the future of wild fish and leaves the viewers wrestling with a disquieting question… have we reached the end of wild?

Read more about the importance of wild Pacific salmon and the plights the species currently faces in ‘The fish that feeds the forest’, featured in Issue One of Oceanographic. Read a teaser here.